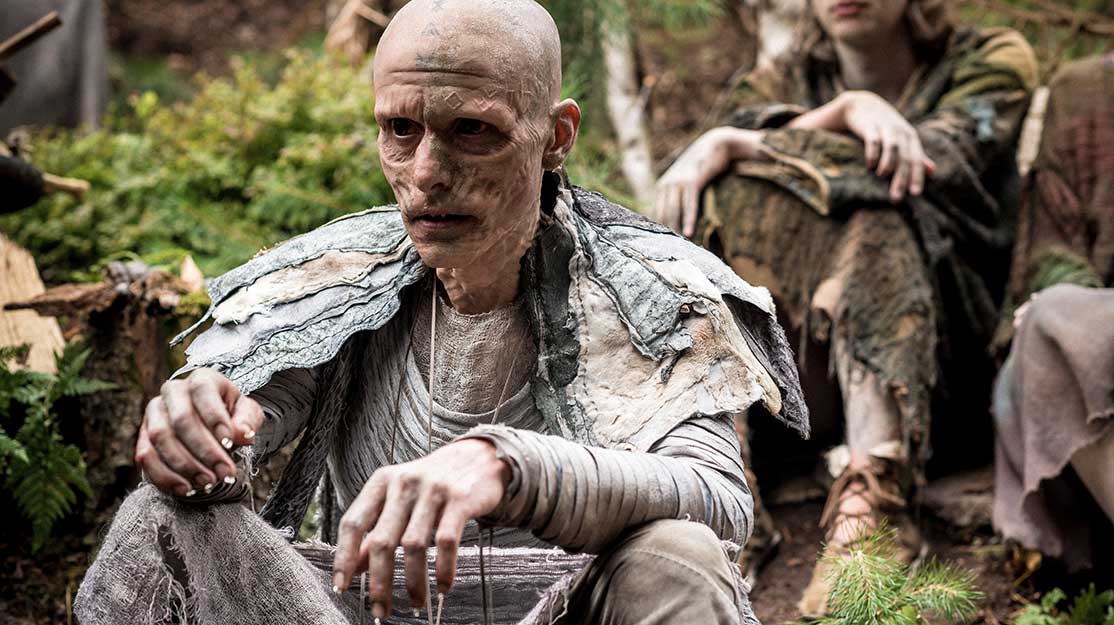 Hair, make-up and prosthetics designer Davina Lamont discusses her work on epic Sky and Amazon historical drama Britannia, in which a Roman army faces up to Druids and Celts in 43AD.

When Davina Lamont received a last-minute call asking her if she wanted to come and work on a “nice little Roman job,” there’s little chance she realised the scale of what was to come.

In fact, the hair, make-up and prosthetics designer could not have joined a more ambitious and visually striking series than Britannia, the Roman Empire-set drama coming to Sky Atlantic and Amazon.

But having worked on The Lord of the Rings film trilogy and series such as Sons of Liberty, Legends and two seasons of National Geographic’s Genius, she had the experience needed to bring to life the three vastly different tribes that feature in the story.

“They told me for Genius season one that they had this little project and it’s going to be a nice little script – and then it turned into a monster,” Lamont recalls. “Britannia was the same. I got called in at the last minute and was told, ‘It’ll be really cool.’ Then it just went crazy. But I’m happy for those jobs.

“Producers are starting to like the fact they have one designer who does all three, instead of splitting up the team and having a hair designer, prosthetic designer and make-up designer. They like the fact, budget-wise, they pay one person to do all three, and I enjoy it too. I love the fact I can go from one job to the next and it’s really different – and creatively different. I do prefer to take on those sorts of jobs – the big and difficult ones.”

In television, they don’t come much bigger than Britannia, which is set in 43AD and follows the Roman army as it sets out to crush the Celtic heart of the mysterious titular land, one led by warrior women and powerful Druids who claim to channel the forces of the underworld.

All episodes of the series, produced by Vertigo Films in association with Neal Street Productions and distributed by Sky Vision, are available to view from Thursday on Sky Atlantic and Now TV.

With just five weeks of pre-production to put her ideas together, Lamont worked with costume designer Ann Maskrey and production designer Tom Burton to create this unknown world and decide how they would represent the different tribes.

“Then from that point, we all went into this exploratory period,” Lamont says. “Five weeks was all we had to put it together. It was tough to try to figure out what the Druids were going to look like. I know they wanted a lot of tattoos and wanted some Vikings-cum-Game of Thrones elements involved. We just had to work it out and work out how it transcends into each and every tribe.”

That exploration process included plenty of trial and error. Lamont says she even questioned whether they should be putting tattoos on the Celtic king (Star Wars’ Ian McDiarmid, as Pellenor) and queen.

“It looked ridiculous,” she jokes. “There were times when I thought, “Oh my God, this is my last job.’ But then you put everybody else into the same world on the same set and you go, ‘Actually it looks phenomenal.’ It was scary to start with, especially with Veran.”

Veran is the leader of the Druids, a character feared and respected in equal measure and who claims to speak directly from the Gods. Portraying him on screen is Mackenzie Crook, known for turns in the Pirates of the Caribbean film franchise and TV series such as The Office and Detectorists. In Britannia, however, the star is unrecognisable, sporting a shaved head and  several layers of prosthetics and make-up that give him a skeletal appearance, with dark sunken eyes and numerous facial tattoos and scars.

“Basically I woke up one morning and wanted to change him completely,” Lamont says of creating Crook’s appearance. “That’s how he came about. I designed the look and then I sent it off to the producers and told them to sit down because this was what I wanted to do with him. But they loved it and said go for it.

“When I rang up Mackenzie for the first time and we chatted over the phone, he said it was brilliant and was exactly what he wanted to have. So it was great, it worked out perfectly. He was brilliant, and then I said I had to shave his head – he was all for it.”

At that point, however, the scripts were still being pulled together by lead writers Jez Butterworth, Tom Butterworth and Richard McBrien so it was unclear how many days Crook would be required to get into costume. But thanks to Crook’s startling look and impressive performances, his screen time grew and grew.

“I don’t remember how many prosthetics we did on him in the end, it was massive,” Lamont says. “We made it to three to three-and-a-half hours for him [to get ready]. It’s a long time.”

Crook also came in with his own ideas for Veran’s image, in particular the little round hooks we see on the end of his finger nails.

“On the very first day we did his make-up, he came in with these hooks and started drilling into his nails,” Lamont remembers. “I was like, ‘What are you doing?’ He said, ‘I’ve got something to show you – I really want to do this.’ He drilled into his own nails with a drill and put these rings on. It was brilliant. So he’s fantastic to work with, he’s down for anything. He’s a brilliant actor.”

Speaking about his transformation, Crook says: “I found it brilliant. I loved every minute of it. From the design to going and having a cast made, and the daily ritual of putting it on, we started off at five hours and then they got it down to three-and-a-half – it was a brilliant process. Watching the skill of the make-up team and seeing myself slowly transformed in front of the mirror helped me get into and form the character.”

Another actor who spent plenty of time in make-up was Gershwyn Eustache Jr, who plays Vitus. Also a Druid and part of Veran’s gang, he needed to have a similar look, calling for more tattoos and scarification on his face. Lamont continues: “We also had Divis (Lie Kaas). We really didn’t know what we were going to do with him. At one point he was also going to have a shaved head, and then the producers really loved the fact we etched runes into his forehead and made them like scarification. Everybody had tattoos, prosthetics, contact lenses, big battle wounds. Every single character had something.”

With the amount of money washing through television drama these days, you might expect the design teams get to play with a bigger budget, especially on a show such as Britannia. Yet Lamont says the figures she has worked with over the last few years haven’t seen the same upward trend as overall series budgets.

“They like to start off by giving me a budget that’s really small,” she explains. “But then the scripts don’t portray the budget I have. Nearly every job over the last 10 years, especially in TV now, I get a budget and it’s nowhere near close enough to what [we need for what] we have to do. My budgets do end up getting a lot bigger. Especially on Britannia, the scripts were still being developed as we were going along so we really didn’t know what would come up in the mix or all the new characters coming through. It was a big guessing game.

“When you don’t know what’s coming up, it gets really expensive because you have to have a number of wigs on hire or made and prosthetics that have to come with it. That’s what happened with Veran’s lot. We didn’t know there were going to be three other actors involved so they became big elements for us. It’s definitely changed from what TV used to be, even 10 years ago, when you could pretty much picture the budget. Now we’re basically doing five feature films in one TV show.”

Unsurprisingly, bigger budgets are demanded by dramas at the fantasy end of the spectrum, as opposed real-world stories on which Lamont has worked on like Top of the Lake. The designer admits she doesn’t know why she continues to be drawn back to genre shows, but says part of the fun is getting to create new worlds for each job.

“I feel like I’m probably meant to be in the fantasy world but I love the fact I can go from a job like Britannia and then go and do a job like Genius,” she adds. “They’re hugely different. With Genius, I have to make people look like they were from the 1900s, like Picasso [season two] and Einstein [season one] – actual people from the past. I love recreating people in that way. I’ve never really been into fantasy but I always get pushed into that genre, so I’ll run with it for now.”