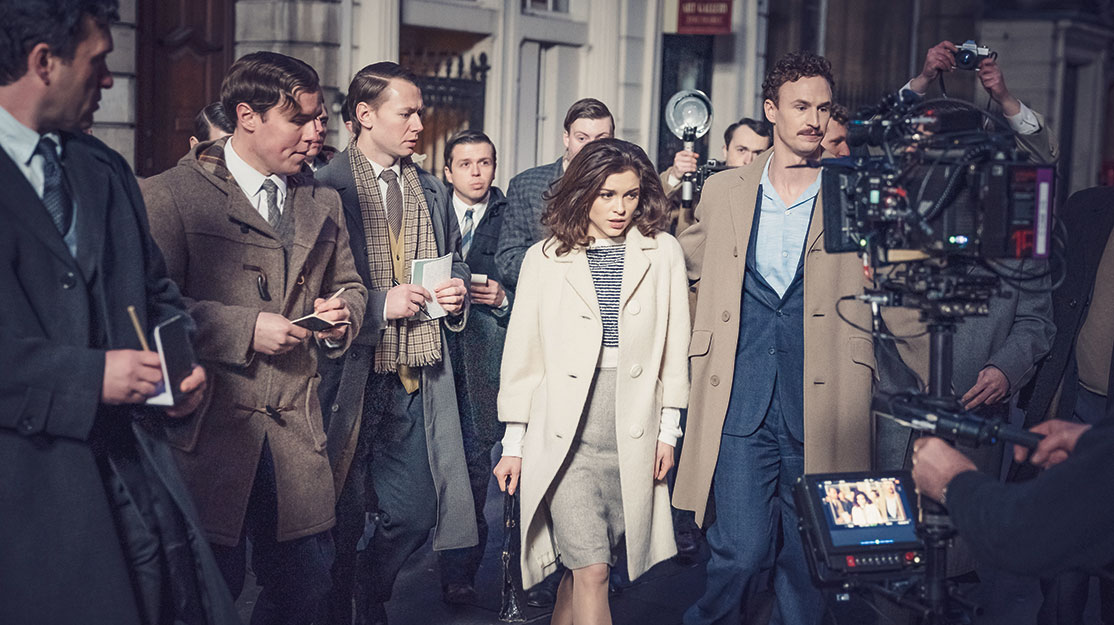 The writer and producing team behind The Trial of Christine Keeler tell DQ about dramatising the real-life story behind the woman at the centre of one of British politics’ biggest scandals.

Political dramas possess all the ingredients of must-watch television, from power, sex and double-crossing to emotional themes and ethical and moral dilemmas – and their appeal is heightened further when they are based on real events.

The next instalment of Ryan Murphy’s FX series American Crime Story will analyse the impeachment of former US president Bill Clinton, while last year’s British miniseries A Very English Scandal received widespread acclaim for dramatising the events surrounding MP Jeremy Thorpe’s trial for conspiring to murder his ex-lover in the 1960s/70s.

Arguably better known in the annals of British politics is the scandal known as the Profumo affair, which saw prime minister Harold Macmillan’s government plunged into crisis in 1961 when John Profumo, the secretary of state for war, was discovered to have been having a relationship with 19-year-old model Christine Keeler.

After initially denying the affair, Profumo was later forced to admit the truth. However, attention surrounding the pair grew following claims Keeler may also have been involved with Soviet naval captain Yevgeny Ivanov, creating a possible security risk. Keeler met both men through her friendship with osteopath Stephen Ward, who was later charged with a series of immorality offences.

The chain of events surrounding the Profumo affair is now being dramatised by UK pubcaster BBC, in a show that will go beyond the headlines to tell the story from Keeler’s perspective and explore how this young woman found herself at the centre of a political and media storm, long before the days of social media.

The Trial of Christine Keeler stars Sophie Cookson (Kingsman: The Secret Service) as the titular character, with James Norton (McMafia) as Stephen Ward and Ellie Bamber (War & Peace) as Keeler’s friend Mandy Rice-Davies, who also becomes embroiled in the scandal.

When DQ visits the set during filming, the production is in the historical English city of Bath, where Ward’s court case is being shot. A room in Bath’s grand Guildhall has been transformed into a chamber from London’s Old Bailey courthouse, where barristers wearing traditional robes and wigs take their place. Men in suits fill the seats reserved for the jury, their eyes flicking back and forth between witness Keeler and defence barrister James Burge (Peter Davison) as if they were watching a tennis match.

Via Great Meadow Productions, the label she runs with Robert Cooper, Triggs has produced a number of shows about real people, particularly women, including the late British prime minister Margaret Thatcher. She also produced Room at the Top, a two-part adaptation of John Braine’s post-war novel, written by Amanda Coe.

Triggs was thinking of other women who might make interesting drama subjects when Keeler’s name came to mind. She mentioned the project to Coe and then the BBC came on board, though the show went on hiatus while Coe penned another BBC adaptation, Apple Tree Yard. Triggs then joined Mistresses producer Ecosse Films, which coproduces the six-part series with Great Meadow. Keshet International is the global distributor, with Endeavor Content co-distributing in the US.

This isn’t the first time the Profumo affair has been dramatised on screen, feature Scandal coming in 1989. But Triggs saw the series as an opportunity to redress the story from Keeler’s position.

“The fact it’s called the ‘Profumo affair’ and not the ‘Christine Keeler affair’ – her name’s hardly mentioned,” she says. “We thought it would be really interesting to see it from her point of view as much as possible and put her and Mandy Rice-Davies at the heart of the story.

“As these things take a long time to develop – we’re talking five or six years to the point of shooting – a number of things have come to the fore, in that the story felt resonant for very different reasons over those five years, which always makes you feel really confident about the story, because there are so many aspects to it. Now, in the post-#MeToo period, what happens in the story and the extent to which it deals with gender, power and sexual politics is really hitting the mark.”

Keeler, who died in 2017, 11 years after Profumo, spoke to the production via an intermediary and was keen to stress that she shouldn’t be portrayed as a victim in the saga. “There still is a feeling that Christine was just a call girl and just a good-time girl who deserved what she got,” says Trigg. “A lot of people don’t even know she later went to jail for perjury, which is a story I’m excited to show because you need to know that to understand the totality of her experience.

“Equally with Stephen Ward, there’s a contingent of people who still think his trial was a miscarriage of justice, but it’s more about understanding who he was to Christine and who Christine was to him, which I think this show and Amanda’s scripts do really beautifully.

“It’s also just a really personal story for young women and young men. And if it were happening today, Christine and certainly Mandy would be on Big Brother or some reality show because it would have been viral and gone everywhere.”

Researching the period, Triggs recalls wondering how Coe would ever be able to distil the events into a coherent set of scripts. “Then I got the first script and I vividly remember reading it and thinking, ‘She’s done it. She’s nailed it.’ It’s just fantastic – Christine is like this wrecking ball going through the script. She’s done an amazing job.”

Speaking to DQ in a cafe beside the Guildhall, Coe says the scandal immediately struck her as great territory for a TV drama, adding that it cuts through layers of society at the time by touching on issues of class, gender, sexuality and race. “It was a bit of a gift,” the writer says. “It’s arguably something we’d find very trivial now, but it became something that imbibed the national consciousness and brought down the government – and that’s a big deal.”

Producer Rebecca Ferguson (Cold Feet, Next of Kin) believes The Trial of Christine Keeler contains many of the perennial themes of great drama. “There’s corruption, sex, lies, infidelity, friendship, love, politics and a light sprinkling of espionage – all the things that make great drama are present in this story,” she says. “We’ve been quite focused in terms of how we make it, and it isn’t like a classical period drama. Amanda’s writing is so fast-moving and fast-paced, with lots of short scenes. There’s a natural rhythm and modernity to it, so we’ve made sure how we make it isn’t in a stately, reverential way. We’re quite energised.”

Coe says she treats Keeler as a sympathetic figure, though one who will still divide viewers. She also offers a glimpse of her background and home life, revealing how she ended up as a dancer at the club where she would meet Ward and Rice-Davies. Original court and police transcripts heavily inform the scripts, “but it’s all woven in. It’s quite enjoyable dropping in the real dialogue,” she says. “It’s a bit like restoring a painting.”

One notable real-life line comes from Bamber as Rice-Davies, who, in response to Burge asserting that her lover Lord Astor had denied having an affair or even meeting her, famously replied, “Well, he would, wouldn’t he?”

The remark draws laughs from the court’s public gallery when it is recreated on set, with Bamber also letting out a giggle before she remembers where she is and straightens up.

Filming has taken place across the west of England, and particularly in and around Bristol’s Bottle Yard Studios, where the interiors of Ward’s London home and Marylebone Police Station were recreated. Other locations included Bristol Central Library as the police station exterior, the Wills Memorial Building for the House of Commons and the Lord Mayor’s Mansion House, which doubled as a Mayfair restaurant and hotel room. Overall, 17 weeks were spent in Bristol, with eight days at the Guildhall in Bath.

“I was quite worried initially, thinking, ‘How do we get 1960s London in Bristol?’ But lots of shows have done London here,” Ferguson says. “The crews down here are brilliant and the practical side of making the show has been a joy.”

As well as two female directors, Andrea Harkin and Leanne Wellham, most of the department heads are women, with the exception of DOP Joel Devlin, who worked across all six episodes. “It’s always the best person for the job but it’s just generally changing behind the camera,” Ferguson says of the increasing number of women in key roles.

“There’s still quite a long way to go in terms of giving female directors a chance to do the job and herald a quite big series. That decision came from Amanda, Kate and I and it’s just filtered through the whole production – and on a show like this, it felt right. We were doing quite sensitive, difficult things on set, with some abusive scenes and sex scenes. Often crews are predominantly male and a set can feel like quite a male environment, and we wanted to make sure that atmosphere wasn’t created for Ellie, Sophie, James and everyone. It had an ease to it and I definitely think that gender balance helps that.”

Fly-fishing scenes featuring Profumo in Scotland proved difficult when heavy rains saw rivers swell, while removing the furniture and fixtures of modern streets is always a time-consuming process for any period drama. Ferguson says the team also made the “mad but worthwhile” decision to build half of the benches inside the House of Commons, so wide shots could capture extras seated behind the main actors, rather than relying on close-ups.

For Triggs, the appeal of the eries comes down to “that age-old thing of sex and power. That’s what it’s about. It does have both of those things in it and it has young people going through a particular, intense experience, but it also has lots of fun.”

Is Coe worried viewers who know the outcome of the story might not tune in, or that viewers might seek spoilers online? Not at all, it seems, due to the show’s focus on Keeler’s perspective. “There’s that weird thing in TV drama, the ‘what next’ element, but sometimes dramas you really enjoy are ones you just want to hang out with,” she says. “You just like being in that world and seeing those performances.”