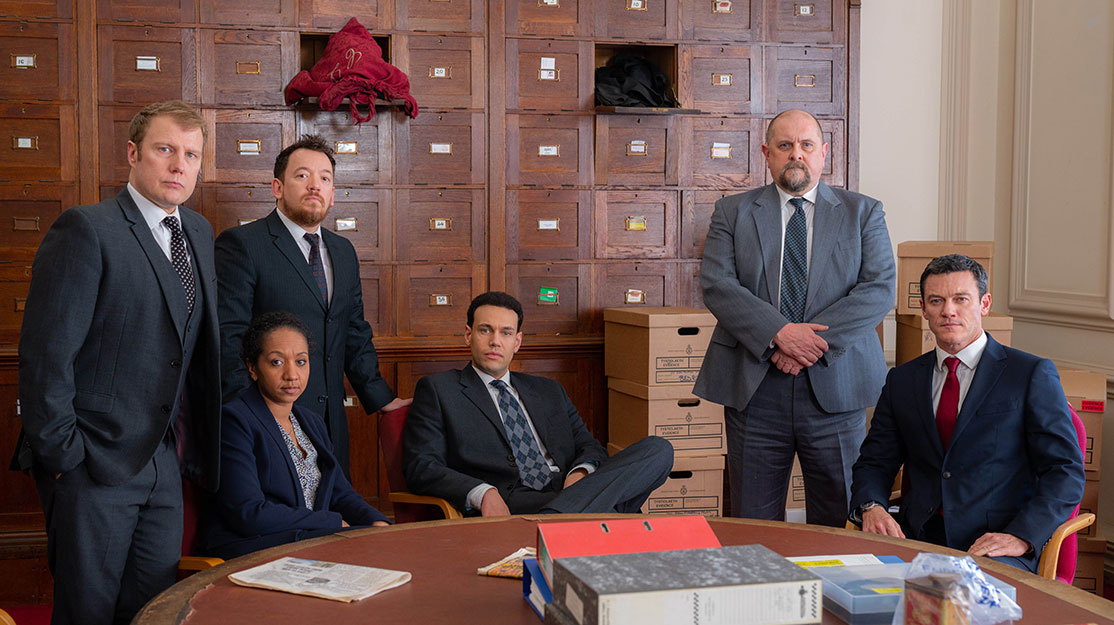 To catch a killer

From White House Farm and Des to Honour and Little Boy Blue, UK broadcaster ITV is building a reputation for true crime drama that continues with the real-life story of how a police officer and a journalist teamed up to pursue a cold-blooded serial killer.

Starring Luke Evans (The Alienist), The Pembrokeshire Murders begins in 2006 when Detective Superintendent Steve Wilkins (Evans) decides to reopen two unsolved double murders from the 1980s – crimes that continue to cast a shadow over the work of the Dyfed Powys Police. Using new forensic methods, Wilkins and his team find microscopic DNA and fibres that link the murders to a string of burglaries from the 80s and 90s.

The person responsible for those robberies, John Cooper, is nearing the end of his prison sentence, but if Steve Wilkins is right, he is also a serial killer.

Welsh actor Evans had previously worked with World on two-part miniseries The Great Train Robbery in 2013 and had been looking for a new project that would see him reunite with World’s CEO and executive producer Simon Heath when he was first approached to star in The Pembrokeshire Murders.

“Over the years, it’s also been a dream of mine to work back in Wales and it’s taken quite a long time to actually happen,” he says. The actor had also worked with director Marc Evans before (Manhunt, Safe House) on tourism adverts for Wales, and so “the stars aligned” – and when he read the scripts, “the story just hooked me immediately.”

“I’m a sucker for a true story,” he continues, “and this isn’t just a true story. It’s a shocking true story about the worst serial killer Wales has ever seen. It just drew my attention to the work the police force do behind the scenes and the human impact of what people go through when something like this happens in their community. It was shot in an incredible part of Wales and I got to shoot this incredible show with an incredible bunch of Welsh actors. I got to use my own Welsh accent for the first time in many, many years. It was a great experience all around.”

With truth often stranger than fiction, Evans notes the twists and turns Steve Wilkins and his team must navigate before uncovering the truth behind the murders, with the minimal amount of forensic evidence almost leading to the case falling apart on numerous occasions.

“It’s a real story of a team of people who absolutely wanted to find the truth and get a man who committed these crimes,” he says. “The work, time, effort and sacrifice they all put in is part of the story. It’s not just about the crimes, it’s about the people who find this man and the unbelievable twists this story takes during the investigation, which are mind-boggling. When I read the treatment, I started Googling it and I realised there were no fictional embellishments in the story. It is as true to the facts as it possibly can be. There’s every twist and turn and setback, and then this glimmer of hope, and it just keeps you on the edge of your seat, which is what you want from a crime drama.”

In fact, it was John Cooper’s appearance on classic ITV darts gameshow Bullseye that eventually led the police to his door.

“It was a huge breakthrough in the case because although there had been an artist’s impression done of a potential suspect for the second double murder, what John Cooper had cleverly done was destroy all the photos of himself from that era,” explains Heath. “So there was no contemporary reference point to put next to the artist’s impression.”

Then Hilton discovered Cooper was the captain of a local pub darts team and had been on Bullseye years before. With the help of Jonathan Hill, who had been reporting on the case, they tracked down the programme footage.

“As part of making the show, we got hold of the same footage and then we were left with the problem of how to incorporate it within our fictional depiction of the story,” Heath says. “What we actually did was superimposed, through VFX, a de-aged image of Keith Allen onto the original footage of Cooper and, testament to the technical guys, they have done a fantastic job and it’s extremely convincing.”

Dr Angela Gallop, who worked on the original case, had introduced Wilkins and Hill’s book to writer Stevens, who then faced the task of distilling a story spanning several decades into three hours of television.

“It wasn’t always plain sailing, but I had a good team around me,” he says. “Thankfully, I’ve done a true crime drama before this, so I’ve learnt a few tricks. It’s essentially about focusing on those moments you know will deliver drama, because there was a plethora of interesting stuff in the book but not all of it would have made for good drama. It’s just a case of maintaining your focus, walking that tightrope and finding the dramatic moments.

“But obviously the book was essentially all about procedure, and one of the happy discoveries I made in the course of reading the book was this detail that when the detectives interviewed Cooper, they interviewed him over the course of three days. Whenever he felt under threat, he would implicate his son, Andrew, and in the book, it was very clear Steve was disgusted by this strategy, as any parent would be.

“Why would you implicate your son in such terrible crimes? It gave me a real fire to find Andrew and tell his story, and meeting with him and spending a lot of time with him delivered an additional storyline not in the book, which I think enriched the eventual drama.”

The other intriguing part of the story is the partnership between Wilkins and journalist Hill, with Heath noting that they initially appeared to be at odds with each other owing to the difficult relationship between the police and the media in Wales at the time.

“When Steve discovered Jonathan was planning a documentary about the murders, he realised that could damage his investigation – but rather than be hostile and cause him to shut the documentary down, he brought him inside the camp to help him catch the killer,” Heath says.

“He did that rather skilfully. The news report you see at the end of episode one is basically Steve’s idea to send a message to Cooper that they had made some kind of forensic breakthrough in the investigation. In fact, that wasn’t strictly true, but it spooked Cooper so when he went to the interviews, he started giving up information he probably wouldn’t have done if he wasn’t so worried. It’s a real story of how the police and press can work together rather than against each other.”

Allen, playing Cooper, brings an “unsettling, quiet menace” to the character, Heath says. Allen himself rewatched the Bullseye footage and saw Cooper’s original police interviews, and says he had to remain intensely focused on his role throughout filming.

“When you’re playing a role where you are interpreting a real person, you can’t take your eye off the ball,” Allen says. “I don’t normally take a character home with me, but when you’re portraying somebody who’s real, you have to stay so focused. You’ve just got to stay in the game.

“What I really like about it is there is absolutely no weird lighting, no weird sound effects. It is very realistic and in your face. There is no glorification in any aspect of what went on in that case at all, and that is testament to both the director and producer. There’s nothing exciting about it. All the excitement is what Nick Stevens captured in writing the development of the chase, which is great. That’s a good thing to see on television. You don’t have to glorify things.”

A key part of the drama was centring The Pembrokeshire Murders in Wales, in locations where the original case unfolded. Filming took place with a Welsh cast on location against the Pembrokeshire landscape, with some interiors filmed in Cardiff.

“There’s a particular quality to Pembrokeshire. It’s a beautiful place to go on holiday and there’s also a big industrial, working-class side, which is where Cooper and some of his victims stemmed from. Marc captures those two sides of Pembrokeshire rather brilliantly. You always feel you’re in that world, even when, for reasons of weather and filming difficulty, we shot around the Cardiff area.”

“It’s just a magnificent place to be at any time of the year, and the juxtaposition of this terrible thing happening in such a beautiful place just adds to the mystery,” Evans says. “I’ve lived in London since I was 17, but I have a very close connection to my family and to Wales. It was just a lovely experience to be surrounded by wonderful, full, authentic, rich Welsh accents and wonderful characters. It was a joy to come into work, as dark as the storyline was, and play these scenes with such an interesting group of people who were all bringing their identities to their characters.”

Distributed by ITV Studios, the production was also able to wrap ahead of the first Covid-19 lockdown to hit the UK in March last year. “I will never forget that day – March 13, 2020,” Evans adds. “We all breathed a sigh of relief and, within three or four days, we were all locked in our houses. We feel very lucky and very grateful that we got to firstly shoot this and bring this very important story to the screen, but also to finish it and have a very interesting, powerful drama to deliver to you.”

By focusing not just on Wilkins and Hill’s investigation but also on the impact Cooper’s crimes and behaviour had on his wife and son, The Pembrokeshire Murders stands apart from other crime stories, with the Welsh setting adding a fresh dimension to the show, says Evans.

“We get to know the other part of John Cooper’s life, not just the fact he brutally murdered people, but also what he did within the four walls of his own house to his wife and son. It just makes my skin crawl, what Andrew went through,” the actor says.

“It’s really important Andrew’s story is told within this story. It really does bring a very human energy to the story. It’s not just about catching the killer. There’s so much more heart and soul to this, and there’s a real journey for many characters, who are broken, damaged and fighting for what’s right and fighting to give a voice to the victims and to people like Andrew. It’s really powerful stuff.”