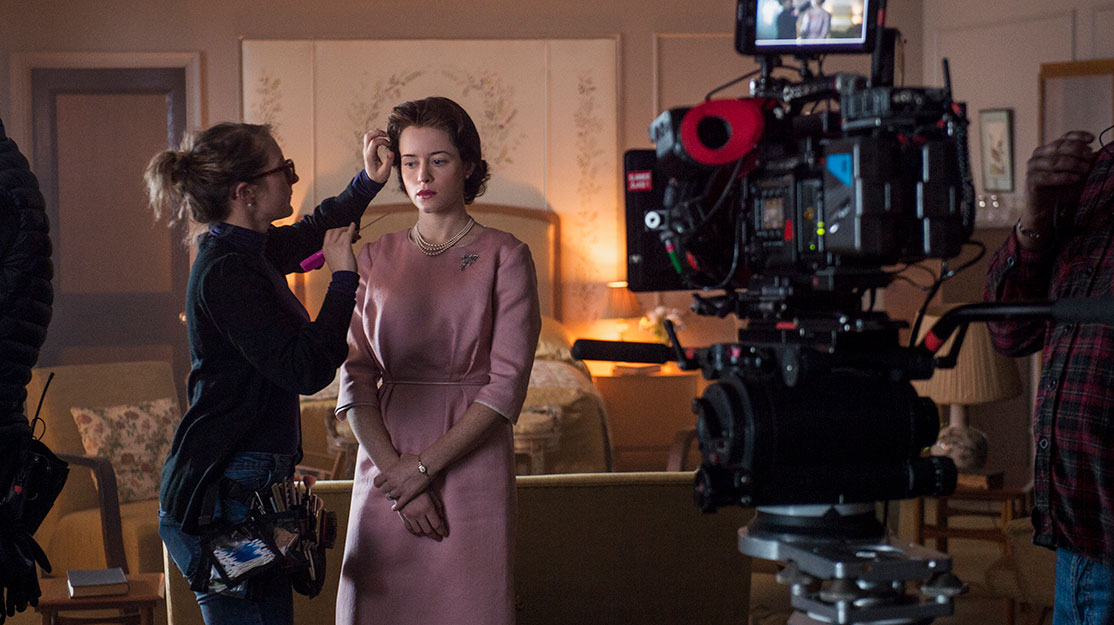 Ahead of Prince Harry and Meghan Markle’s impending nuptials, royal marriages will be pushed further into the spotlight in season two of Netflix’s The Crown. DQ visits the set to hear how the Queen’s union with Prince Philip is pushed to the limit in the second run.

In what looks like a car park at Elstree Film Studios, situated next to a large branch of Tesco, sits Buckingham Palace and 10 Downing Street.

The doors and gates of Buckingham Palace are surrounded by green screens that allow The Crown’s crew to work their magic so that it really looks like a palace rather than a particularly ornate bit of plywood. Meanwhile, the door of the somewhat grubby-looking prime ministerial home is taller than normal; it was raised by nine inches to make John Lithgow look more like the rather smaller Winston Churchill in the first season and now it is stuck at that size.

These two buildings, weighted with history, are at the heart of British life and the interweaving stories of what goes on behind their doors are the spine of the award-winning show, one of the most ambitious pieces of television ever made.

The first two seasons cost a rumoured £100m (US$133m) but almost every penny can be seen on screen. This season also spans Antarctica, the South Seas, the Suez Canal, Scotland, Lisbon, Washington, Nazi Germany, Paris and Ghana, while much of the action of the first three episodes takes place on the Royal Yacht Britannia. No effort has been spared to make this sumptuous world believable.

The characters, too, are larger than life, encompassing everyone from the Kennedys and preacher Billy Graham to cuckolded prime minister Harold Macmillan and Christine Keeler, the showgirl who helped bring down a government. But, at the heart of it, is a special but often dysfunctional family.

The Crown showed the world a very different side of the royals in its 10-part first season. Starring Claire Foy as a naïve but eager-to-please princess who found the crown thrust upon her two decades before she expected it and Matt Smith as her alpha male husband who was forced to give up his own aspirations to stand behind his wife, the show humanised them and made them more understandable.

“I am not a Queen nutter or anything,” insists Peter Morgan, the show’s creator and writer. He first wrote about Elizabeth II in The Queen, the Oscar-winning film about how the Palace and prime minister Tony Blair reacted to the death of Princess Diana. That led to The Audience, the award-winning play where he looked at the secret weekly meetings between the monarch and prime ministers over the decades. The Crown, the entire second season of which landed on Netflix today, was the obvious next step.

As a younger man, Morgan was a republican, but he admits he has since changed his mind. “Most sensible people in the early 1990s probably thought this lot should be kicked out,” he says. “But if we had a referendum on the royal family tomorrow, I think 80% of the country would vote to keep them. I certainly would. I really would. Look at the heads of state everywhere else – there has been a catastrophic failure of the political class in the last couple of years, but [the Queen] represents stability.”

The second season of the Netflix show, which is made by Left Bank Pictures and distributor Sony Pictures Television, starts in 1956 with prime minister Anthony Eden’s disastrous Suez Crisis and ends in 1964 with his successor, Harold Macmillan, resigning amid the Profumo scandal. In every crisis, the Queen is left to pick up the broken pieces, as she has so many times since.

In this season we also see how, despite her home life being turbulent, the Queen always puts duty first. Her marriage to Philip is particularly under the spotlight at the start of the 10-episode run.

“Doesn’t everybody in Britain know Philip’s had an affair?” teases Morgan. The answer is no; no one knows for sure whether he had an affair or two, but there have been plenty of rumours. The season plays on them, and how they and Philip’s playboy behaviour impact the Queen. The rumours arc across the season, starting with Philip’s five-month tour on the HMS Britannia that took him away from his family to open the 1956 Melbourne Olympics and visit some of the Commonwealth’s far-flung islands. It ends with his name being mixed up in the Profumo affair.

History has proved the Queen and the Duke of Cambridge’s marriage to be spectacularly successful and last month they celebrated 70 years together. It meant the programme-makers had to think hard about how to treat these rumours, and they tread the line carefully.

“There has never been any confirmation of an affair and it would be prurient, really horrible and irresponsible to make hefty suggestions,” says Left Bank’s Suzanne Mackie. “We know for a fact that this has been a very long and successful marriage. So many people we have talked to, historians and people who have worked in the palace, say they have witnessed a lot of love and affection in this marriage. We have nothing but respect for that. It would be ghastly of us to say anything else.

“And yet, like any marriage, it has to go through periods of change and periods of uncertainty and instability. It is something most of us have experienced; this is a real marriage and we would be whitewashing it to say it was happy all the way through. So we go on a complicated twisting, winding road and we hope that we come out with something truthful.”

While the programme-makers have always been keen to stress they are making drama, not a documentary, they try not to steer too far from facts. A group of historians dubbed The Brains Trust both suggest storylines to Morgan and also ensure the spirit, if not the letter, of the drama is correct.

One story sees the Queen fall out with Jackie Kennedy (Jodi Balfour) over nasty comments the First Lady made about the monarch. This plot element was based on rumours in Cecil Beaton’s diaries but is heavily fictionalised. A separate story about the Duke of Windsor (Alex Jennings), the Queen’s uncle who abdicated the throne, and his Nazi past is more based on fact. It hinges around the discovery of the Marburg Files, which indicated just how sympathetic the Duke was to Germany’s ambitions.

“You can access the files at the British library and they are amazing,” says Philippa Lowthorpe, the Bafta-winning director who helmed the episode. “When we were filming, I carried them around in my bag so when the crew asked – and they frequently did – how much of it really was true, I could fish them out and show them.

“They are telegrams and letters from people who were around the Duke. Everybody was talking about him. They were manipulating him but he didn’t seem to mind. He had sympathies with Hitler and his philosophy.

“We used copies of the real files throughout the show and there’s a scene where the Queen is given them. It was the first time Claire got to read them – there are about 60 documents in the file – and when she finished the scene she just said, ‘Oh my God.’” Just to emphasis how true this story is, real pictures of the Duke are used at the end of this particular episode.

Meanwhile, the turbulence we see in the love life of Princess Margaret, played by Vanessa Kirby, who in this season meets and marries the philanderer Tony Armstrong-Jones (Matthew Goode), is also based on fact.

“Tony represents the shock of the new, which is a real theme of the series,” says director Ben Caron, who directed three episodes of season two. “This is the end of the age of deference and the royals are being thrust into the modern era. Tony is from an artistic world and he challenges all the conventions people have got used to.”

The plan is to have six seasons altogether and filming for the third starts in July but with an entirely new cast who will take the royals into the 70s and 80s, the era of Margaret Thatcher and Princess Diana. Olivia Colman, the Bafta- and Golden Globe-winning star of Broadchurch and The Night Manager, will replace Claire Foy as an older version of the Queen, while the producers are close to choosing the rest of their royal family.

Caron, who directed the final scene to feature Foy, Kirby and Goode (ironically one that has not made the final cut), says wrapping the shoot was a bittersweet moment. “The gaffers put on an amazing light display and turned the whole room into a big disco,” he says. “Everyone had slowly started appearing on set from all the departments you don’t always see and you suddenly realise the magnitude of the thing.

“There were a few speeches and some champagne. We’ve all been on this amazing two-year journey together – we’ve seen more of each other than we’ve seen of our own families and it was tough having to say goodbye to the cast. But, for the rest of us, the work continues.”