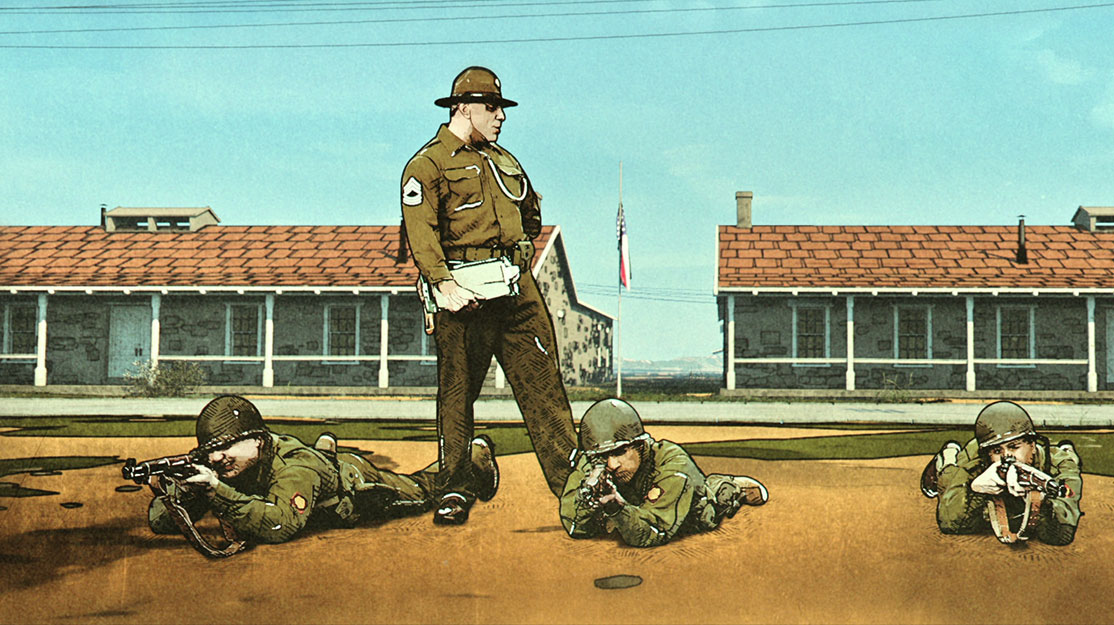 New animation technology brings together live performance and CGI in The Liberator, a Netflix miniseries that recalls the gruelling, real-life mission of a group of World War Two soldiers known as the Thunderbirds.

While graphic novels continue to be a source of inspiration for television drama, Netflix miniseries The Liberator might be about to reverse the trend.

Set during the Second World War, the four-part drama tells the true story of infantry commander Felix “Shotgun” Sparks, who led the members of the 157th Infantry Battalion of the 45th Division – a group of white cowboys, Mexican Americans and Native American soldiers known as the Thunderbirds – on a 500-day march across Europe that culminated in the liberation of the Dachau concentration camp.

But what sets this war drama apart is the fact that although it was filmed using real actors, it looks like it has been ripped straight from the pages of a graphic novel. The series is the first ever produced in Trioscope Enhanced Hybrid Animation, a new technology that marries the emotional nuances of filmed performances with computer-generated environments and a stylised look that pushes the boundaries of the new trend for adult animated series.

“Our goal is not for our shows to look photo real but stylised, like a graphic novel, a comic or a beautiful illustration,” The Liberator director Grzegorz Jonkajtys tells DQ. “We have a real performance in it. What you see is not an animation. There’s no reanimating our actors. We shoot them on green or blue screen with costumes and props. But what you end up with is an unaltered performance that just happens to look, on the surface, like it’s a stylised graphic novel.”

“This may be a little controversial to say in today’s world, but we feel like chasing the photo-real look that you see in CGI blockbusters is a fool’s errand,” admits executive producer LC Crowley. “Our thought has been to really focus on true, unaltered human performance – but by putting it in a stylised, fantastical environmen, you have something new.”

With an ensemble cast led by Bradley James (Medici) as Felix Sparks, The Liberator comes from a partnership between A+E Studios and Trioscope Studios, where Crowley is CEO and Jonkajtys is chief creative officer. Based on the book by Alex Kershaw, the series originally began life as a live-action project penned by Die Hard screenwriter Jeb Stuart.

The team at Trioscope had been researching and developing test Trioscope material, which was then shared with A+E, which happened to have a project it thought could be a perfect fit for the new style.

“What we didn’t know at the time was that [the project] was struggling because it had been determined to be too expensive [to make],” Crowley says. “But they had the foresight to say, ‘Hey, maybe that Trioscope stuff is the way we solve this big epic story.’ We did some test material and everybody was just blown away. Then somebody at A+E shared it with someone at Netflix and we got a call out of the blue saying, ‘Hey, we’re from Netflix. We saw this thing you guys made. It’s really interesting. We think we’re gonna buy it.’ We’ve obviously felt very fortunate they were willing to take an early bet on us. Hopefully we have not let them down.”

The Trioscope technology worked particularly well with the story of The Liberator because of its numerous emotionally demanding scenes, which Crowley and Jonkajtys say couldn’t have been achieved using traditional animation.

“Especially the liberation of Dachau, I just can’t imagine it with cartoony characters looking at those prisoners in that encounter scene,” says Jonkajtys. “It has to be told with real humans.”

“Compared with other animation, there just would be no way to do it,” Crowley notes. “Dachau is obviously the biggest sense of human suffering, but the guys in our story cover all kinds of human suffering. To be able to show that with the appropriate amount of nuance and respect, I just don’t think there’s any other type of animation that could actually pull that off.”

Developing the series, which will be released in 190 countries worldwide on Wednesday, Trioscope began designing concept art that would inform the final look of the show, while also completing many of the processes typical of a live-action series, namely storyboarding shots, casting and rehearsing. When it came to the shoot, smart make-up was used along with particular props and camera settings that helped the VFX animators in post-production.

“One big thing we do is a very detailed pre-visualisation. We basically make a very poor animated version of the whole show,” Crowley says. “It’s black and white with temporary music, sound and dialogue. But what this helps us do is know whether the show works. And then it can only get better because, if it works with very rudimentary animation, we make sure all the ingredients are there dramatically.

“Then we can determine ahead of shooting what parts of the set we have to build for the actors to interact with and what can be later animated in CGI. We can discuss the lighting and all the mood stuff with the DOP ahead of time, of course, because he sees the material and we can dramatically help design that stuff.

“Then we can start building the CGI environments early on. On set, this whole pre-vis helps actors a lot. We try to have as many real elements as possible on set but, of course, we’re not going to build big buildings, so we show them a clip and they can immediately put themselves in it. That doesn’t mean we stick to it 100%. Of course, if there’s magic on set, if somebody has great idea or something just works in different way, then we go with it. But having that blueprint is enormous help for every department.”

Writing the limited series, showrunner Stuart had to completely rewrite the scripts he had already penned, putting a particular emphasis on key scenes that would now be animated.

“He was very gracious to come at it from that respect and really was able to write to the medium,” Crowley says. “What you’ll see across the various episodes of The Liberator is each episode is visually in its own world. That’s Jeb really looking at the visuals and taking advantage of them, which is cool.”

Director Jonkajtys admits the production was a challenging experience for the actors, who were aided by the pre-vis but then left to perform on a very limited set. “Our goal was to always make sure they interacted with objects, that there is no tennis ball somewhere representing a wall,” he says. “If there is a wall or if there is a confined space that’s supposed to be there, we would always build it, whether it’s with real elements that end up on screen or with blue-screen walls.”

One set that was built was that of a jail, complete with narrow corridors. “But what we found is that even if there is a battle scene or a scene that eventually will take place with a lot of extras, there weren’t many distractions, because it’s a fairly small shooting stage. So it was more comfortable for an actor pour out their emotions in such an intimate setting,” he continues. “Then, because of Trioscope, we are able to add elements into the background and expand that scene. But the intimacy is there, and that’s very beneficial.”

From Netflix series Love, Death & Robots and Amazon Prime Video’s Undone to The Liberator and even feature film Spider-Man: Into the Spider-Verse, Crowley believes there is a “Pandora’s box moment” happening in terms of the growth of adult animation.

“There’s a lot more experimentation and these shows are speaking to what we think is audiences giving an early signal that they are into this and that it is much, much bigger than a niche,” he says.

“Every year for the last 50 years, there’s been a really cool, critically acclaimed animated film coming out of some part of the world that remains niche. But The Liberator and many other things are indicators that something bigger is there. What we’re trying to do is grow that category in a meaningful way and really show audiences that animation can do a whole lot more than it’s really ever been tasked with doing on a mass scale.

“If animation can tell the story of the liberation of a concentration camp and can do it in an emotional way that that an audience does respond to, then I’m not sure there’s anything it can’t do. We’re looking at where else can we really push the boundaries and really demonstrate animation’s power for drama, whether that’s super sci-fi or all types of different period material, both grounded [in reality] and ungrounded. What we hope is that we are leading the charge but many others follow.”

“Audiences now love different animated looks, which Into the Spider-Verse, for example, proves,” Jonkajtys says, noting the film’s use of various animation techniques including Japanese animé. “But they are just drawn to good stories and can accept more and more a different style of what they are watching on screen as long as the story is great. That opens up Trioscope to a lot of great projects.”