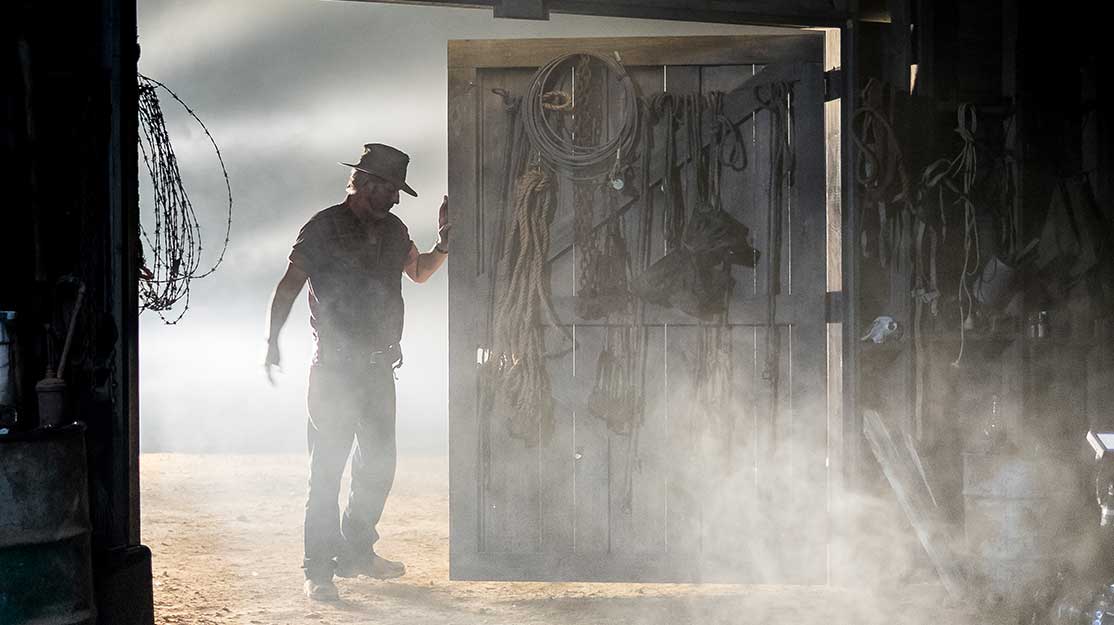 John Jarratt brings the scares in Australian thriller Wolf Creek. He and creator Greg McLean give DQ the lowdown on the murderous series, which is about to air in the UK for the first time.

From Dexter Morgan and Hannibal Lecter to Norman Bates and Heroes villain Sylar, television’s serial killers can take many forms.

But in Mick Taylor, the small screen might have found its most murderous psychopath yet.

The shadowy figure at the centre of the Wolf Creek franchise was first brought to life in two cult movies (Wolf Creek and Wolf Creek 2) before Australian streamer Stan commissioned a six-part series from the films’ creator and director Greg McLean.

John Jarratt reprises his role as Taylor, who massacres an American family enjoying a holiday in the Australian outback. However, 19-year-old Eve (played by Lucy Fry) survives the attack on her parents and brother and sets out to bring the killer to justice.

Cast as Taylor for the first film, which was released in 2005, the actor admits he was initially apprehensive about playing the character but soon found himself at ease working alongside McLean, who he describes as “one of the best directors I’ve ever worked with.”

After an eight-year gap, Wolf Creek 2 arrived in cinemas in 2013 and it wasn’t long afterwards that Jarratt found himself discussing the possibility of bringing Wolf Creek to television.

“Greg rang me and said he’d been keeping something under his hat,” Jarratt recalls. “He said he’d got this crazy idea of turning Wolf Creek into a six-part series. I thought it might be getting a bit gratuitous – I couldn’t see how it would work, so I wasn’t entirely convinced. But I read the scripts and they were very, very good so I had to eat my words and they have done a brilliant job of bringing the scripts to life.”

Adapted for television by McLean, Peter Gawler and Felicity Packard, the series is produced by Screentime in association with Emu Creek Pictures. It is distributed internationally by Zodiak Rights.

McLean says he couldn’t have asked for a better transition from the movies to the series: “I set out to do something we felt was on par with the movies in terms of production value and the look and feel of it, but we also wanted to go a bit further and explore the world and explore the Australian outback in different ways,” he explains. “We got to expand the scope, which was awesome. It’s been a huge hit in Australia. You never know how it’s going to go – it could be crappy or amazing. Our goal was to blow people away with it. I thought we had an interesting story to tell, with all the scary elements of the film but more like a thriller.”

In the first movie, three backpackers are taken hostage by Taylor and, despite escaping briefly, are then hunted down. Though it might have been problematic to take the same structure of the original movie and stretch it over six hours of television, McLean says the series quickly fell into shape when the creative team decided to turn it into a revenge thriller, with Eve on a quest to avenge her parents and brother.

This also allowed time to be spent delving further into Taylor’s character – some of which was explored in several prequel novels released around the time of the second movie – as well as pursuing additional plotlines a movie running time doesn’t allow.

“Scary stories are specific in terms of how they work,” McLean notes. “Trying to keep that atmosphere and tone for a long time is difficult. That’s why this is much more of a crime thriller as opposed to a horror story. Once you have the context of the characters, you can bring in the horror. And with a character like Mick, who has the entire outback to hide in, you can keep trying to track him down. It’s a fugitive story.”

Jarratt describes Mick Taylor as a “happy-go-lucky, larger-than-life larrikin who can hold his hands up and is afraid of nothing – unfortunately he’s a serial killer and a psychopath at the same time.”

But when he’s on set, does Jarratt stay in character? “I’m not a method actor, I say I’m a professional actor. But there are times when you have got to stay within things,” he admits. “You cannot just turn back into John Jarratt and have a coffee break and then go and stab a girl and turn into a psycho. You have to stay within that realm so during the day I’m fairly well in character to an extent. It’s like when you’re a football player sitting on the substitute bench. You sit in a chair and stay interested in the game and are ready to play the opposition. That’s what I’m doing.”

Perhaps surprisingly, Jarratt says he’s not a fan of horror – “I don’t like Freddie Krueger or zombies – the Mick in me wants to obliterate them!” – instead preferring films such as Cape Feare and Psycho, where the scares are grounded in reality, rather than fantasy.

But having become synonymous with his character, was there any doubt he would return for the Wolf Creek series? “You cannot do Silence of the Lambs without Hannibal Lecter,” he says. “Without me, they’re buggered! I have got to be in it or it’s not Wolf Creek.”

McLean says Mick Taylor was born out of a desire to create a character who was the complete opposite to another iconic Australian movie character – Crocodile Dundee, who had three big-screen outings in 1986, 1988 and 2001.

“He has all the looks and sounds of the Australian cliché but possesses all the terrible qualities we don’t talk about – he’s homophobic, racist, sexist,” McLean says of Taylor. “A lot of these things were popular in the fifties. Ideally, society becomes more tolerant and equal but Mick is that throwback character – a nightmare where all these things are taken to the nth degree. If he doesn’t like someone, he kills them and his beliefs justify his actions.”

But unlike Lecter (played by Mads Mikkelsen), for example, whose murderous streak in three seasons of Hannibal was limited by NBC’s status as a broadcast network, there were no such limitations for Taylor on Stan.

“I thought there would be a lot of controls, rules and regulations,” confesses McLean, “but because they’re a streaming service, they said don’t censor it or yourself. They let us do it. We didn’t want it to be gratuitous. The TV series definitely has a different tone to the movies. It has shocking things but it’s not full-on horror. It’s much more about the characters, the environment and the suspense.”

For the series, McLean collaborated with fellow director Tony Tilse (Murder in the Outback, Ash vs Evil Dead), whose experience in the horror genre helped keep the spirit and tone of the movies intact – something that was enhanced further by the decision to replicate the vast isolation of the Australian outback by returning to the same filming locations.

“We realised we had to go back to the locations the film was shot in,” McLean explains. “For television, we cannot really afford to go out there but we made the decision we had to have the same scale. It really gives context to the story. The landscape is one of the biggest characters.

“Mick becomes an omnipotent point of view. There’s the suggestion [later in the series] that there may be some other aspects to Mick, maybe some supernatural elements. But one of the reasons it’s so scary is because it’s an unbelievably isolated place. Add Mick to it and it becomes really scary. It’s vital to Wolf Creek and as important as Mick Taylor.”

For Stan, turning a feature-film franchise into its first original series presented an opportunity to take advantage of an existing fan base and a premise that could create a lot of noise for the SVoD platform.

“Taking a fresh approach to an existing film franchise was an exciting opportunity for us,” explains Nick Forward, Stan’s chief content officer. “By flipping the protagonist and making the story about loss and revenge, it enabled us to go much deeper into the mythology Greg had created with the original films.”

From the start, Stan was “heavily involved” in developing the series, which “exceeded our wildest expectations” when it debuted in May, Forward adds. “It was important to us that the show had a strong female protagonist, and that the tone and genre evolved from the straight-up horror of the movies. Once production was under way, however, we were more than comfortable to step back and let people do their thing. With great on- and off-screen talent across every part of the production, we knew we were in very safe hands.”

Wolf Creek will return to the big screen next year, and McLean confirms there are talks about a second season of the TV show after that.

“Hopefully people really like it,” he says, speaking ahead of the show’s UK debut on Fox on August 30. It will also debut in the US on Pop TV on October 14. “The key thing is we were lucky enough to expand the world of Wolf Creek and that is the Australian outback. It’s one of the last mysterious places on Earth. It’s so vast and so empty and sparsely populated, it’s a place with creepy stories and characters. It’s an original setting for this crime drama. If people like being scared, this is certainly the place to go.”

But will Mick Taylor be back for more? “Evil never dies,” Jarratt jokes. “That’s all I’m saying.”