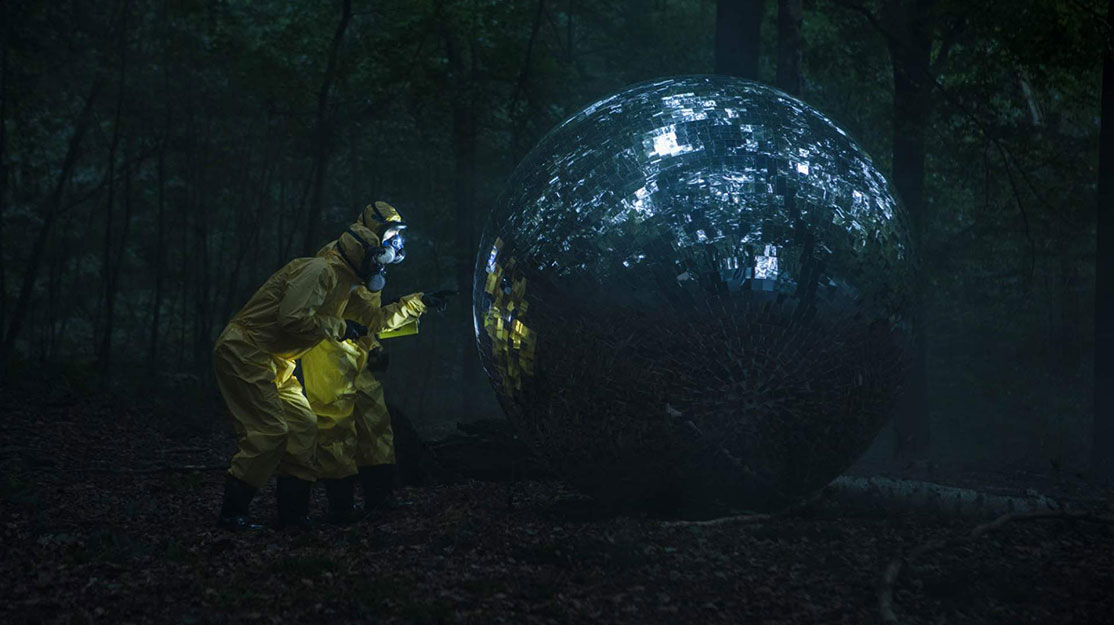 The truth is out there

François Ivernel, the producer of OVNIs (UFOs), discusses the making of this supernatural comedy drama, in which a rocket scientist is called upon to investigate paranormal phenomena in 1970s France.

When we first meet Didier, the protagonist of French dramedy OVNIs (UFOs), he’s having a bad day. Having just seen his rocket explode shortly after take-off, the brilliant space engineer is summarily sent to head up a mysterious government department that investigates paranormal sightings and other phenomena. It’s there he must debunk the extensive backlog of sightings and reports of odd or otherworldly events – such as dozens of pink flamingos falling out of the sky – if he is to hope to lead another rocket mission.

But as the 12-part period series plays out in 1978, Didier, supported by the department’s eccentric staff, finds there might be more to the seemingly vast, empty recesses of space than first meets the eye. With Didier’s scepticism turned upside down, he also must also contemplate life as a single father, while he still harbours hopes of reuniting with his ex-wife.

Launching in France on Canal+ in January this year, the series has already been renewed for a second season, with shooting set to resume in April. Starring Melvil Poupaud as Didier, alongside fellow cast members Michel Vuillermoz and Géraldine Pailhas, it is produced by Montebello Productions and marks the first television series from film producer François Ivernel, whose screen career ranges from titles such as Girl with the Pearl Earring and Bride & Prejudice to Mrs Henderson Presents, Slumdog Millionaire and 127 Hours.

“I had been wanting to do TV for a while so I looked into many possibilities and many projects,” Ivernel tells DQ. “This one I liked because I think UFOs make people dream. It’s about whether we’re alone in the universe. We all think about it once in a while; it’s one of the big mysteries of the universe. The second thing is it’s taken from fact – this French bureau still exists. That was great ground of reality to dig into. I also liked the tone of it: it’s supernatural but funny at the same time. I liked the balance of humour and fantasy.”

The series had been in the works for four years, with creators Clémence Dargent and Martin Douaire first developing it at film school. Canal+ also joined the project very early on, while those initial years were marked by numerous rewrites as the series found its tone and the right balance of characters.

“The first version had more standalone episodes, but we gave it a bigger story across the season,” Ivernel explains. “It’s about the pink flamingos falling from the sky [shown early in episode one]. That’s the big investigation that will take place across the first season. But the story is really about whether the main character, Didier, is going to start believing in UFOs. He’s a very rational guy and it’s about him starting to believe in other things. At first, he wants to get through the whole thing [as quickly as possible] but then he starts to believe in it and to like the people he’s working with.

“But we don’t take a position for or against UFOs. We present possibilities of the universe and let people believe what they want to believe.”

It’s the balance of drama – that initial rocket explosion – and surrealism, like the rainfall of flamingos, that sets the tone for the series, which is directed by Antony Cordier (Gaspard va au Mariage). Dargent and Douaire wrote the series alongside Julien Anscutter, Marie Eynard, Raphaëlle Richet and Clémence Madeleine-Perdrillat, and Ivernel says honing the pilot proved to be a particularly lengthy exercise as the creators sought to perfect the blend of genres. “But they had it in them,” he adds. “It’s not something you can manufacture. They love mystery and have a great sense of humour as well. It was really about them putting it on paper, more than trying to lead them to something that would be ideal and perfect. They really had the guts for it.”

As he began to think about starting production, Ivernel faced some big challenges, not least working with the crew to find locations, costumes and hair and make-up suitable for the period show. Filming was completed before the Covid-19 pandemic led to the suspension of production around the world last spring.

“There were special challenges for this story – for example, the pink flamingos,” he says, referring to the birds that also inhabit Didier’s office. “We looked at many possibilities of doing it either in VFX or with robotics or various things. In the end, it was mostly done with real birds that are used to humans. We had to find the birds and the [animal] specialist. It went fairly well once we found this guy and the birds, because they were used to people. It went a lot better than I feared when I first read about pink flamingos in the script. But when they fall from the sky, they are animated.

“There is also a huge mirrorball [pictured top] at one point in the series, which you can’t really find, so we had to make this huge ball with mirrors. There were many interesting challenges.”

Finding the main location was also tricky, but the former headquarters of Belgium’s national TV broadcaster fitt the bill, with most of the series also filmed in and around Brussels. At one point, the crew were also tasked with recreating the Arctic and found their vertiginous solution in mountains 2,000 metres above sea level. “That was very challenging because we had to go there and build igloos, which were melting faster than we were building them,” Ivernel says.

Like Ivernel, leading actor Poupaud is not known for television, nor comedy. One of the film actor’s few small-screen roles saw him play a serial killer in Insoupçonnable, the French remake of British crime thriller The Fall.

“It’s not what he had done so far but he’s a terrific actor. He’s been acting since his teens and, when you look at his films, he’s done about 50,” the producer says. “He’s a very accomplished actor. We were delighted because he turned to a new side of his art by playing the comedy in a very subtle, fine way. He’s a super professional. He’s always on time and always knows his lines. He was just fantastic.”

Similarly, director Cordier comes from a film background and is known for writing and directing his own work. “He arrived a year before we started shooting so it was very much not his show in terms of him not having written it,” Ivernel continues. “That’s a bit unusual because Anthony is really an auteur director in a very French way and a new-wave kind of way. He writes, choses the actors and directs, so it was the first time he was directing not from his own script.

“He thought it was very pleasant not to go through the hell of writing before directing. We went to him because of his tact, visual sense, subtlety with actors and his tone. His latest film has a tone of light humour and that’s what attracted us to him. He got into it and he loved doing it.”

Ivernel, Poupaud and Cordier joining forces for a TV series is an example of how the medium is becoming a rising force in France, admittedly “with a little delay,” the producer notes of a country steeped in cinematic history and tradition. “France was very snobbish about television until a few years ago. There were really two separate worlds: people doing TV all their life and people doing film all their life.

“It has changed a lot in the past two or three years, [with people like writer, director and actor] Cédric Klapisch going to do Call My Agent or Éric Rochant, the director/writer of Le Bureau des Légendes [The Bureau]. All the best French shows have been done by people coming from film, and now actors like Melvil, for example, are going to television now.”

Distributed by StudioCanal, UFOs is among the series being screened next month as part of Berlinale Series Market Selects at this year’s virtual edition of the German film festival. Ivernel believes the series is “unique” and unlike anything else being made in France.

“It’s not being immodest to say it,” he states. “People have reacted to it, whether they love it or not. It’s very unusual. In France, there are some classic crime stories, there are some comedies. The supernatural [genre] in France is quite unusual, but supernatural with humour is never done. And period on top of that as well – it’s totally unique. It might make it difficult for some audiences but it also makes it totally stand out. I hope people will discover the show.”