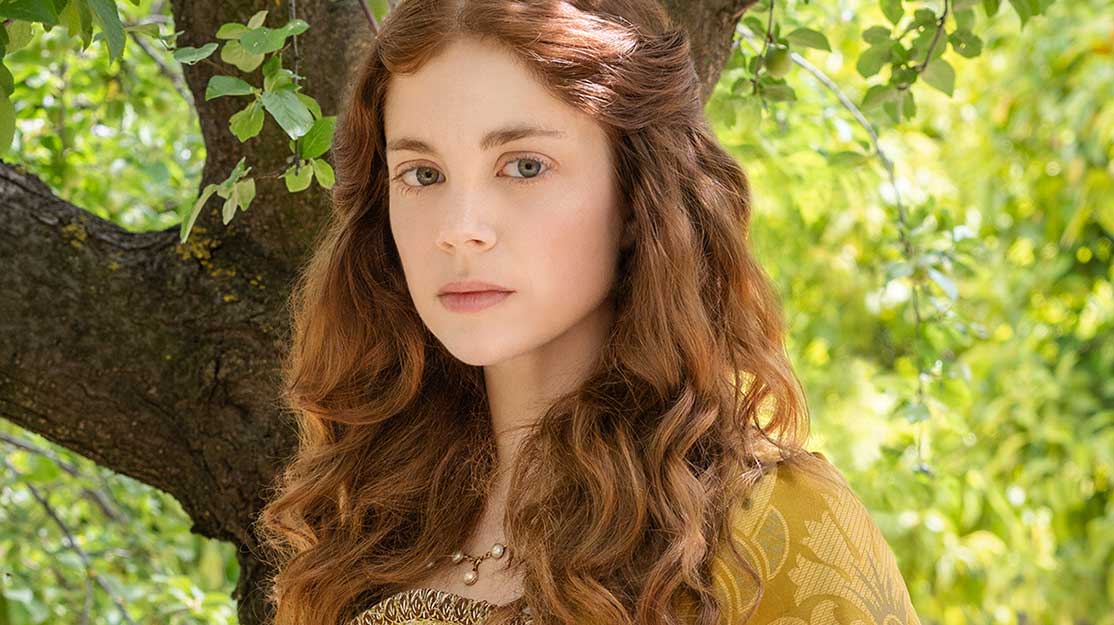 Showrunners Emma Frost and Matthew Graham explore the early life of Catherine of Aragon, Henry VIII’s first wife, in historical drama The Spanish Princess. They reveal how the future queen caused a stir in Tudor England and the drama’s parallels with Breaking Bad.

Hot on the heels of The White Queen and The White Princess, US premium cable network Starz is continuing its dynastic saga of Tudor England with eight-part drama The Spanish Princess.

Like both of its predecessors, this new series recalls history from the perspective of its female characters and is based on historical novels by author Philippa Gregory, this time The Constant Princess and The King’s Curse. But while the story ostensibly focuses on Catherine of Aragon’s arrival from Spain with dreams of becoming queen – an ambition she achieved by marrying the future Henry VIII – it stands apart from previous instalments through its perspective of an outsider causing a stir in the Royal Court, themes of immigration and its focus on people of colour living in 16th century London.

Under the leadership of co-showrunners Emma Frost and Matthew Graham, the series will reveal how Catherine left a Spain ruled by her fearsome mother, Isabella of Castile, and came to England, where she experienced a huge culture shock in a land that was comparatively old fashioned and male dominated.

“She really causes gigantic ripples in this old-fashioned, rather fusty male Tudor world,” Frost explains. “As history goes on to tell us, her daughter Mary [with Henry VIII] becomes the first queen in her own right, Mary I.”

But there’s another reason that Frost and Graham believe The Spanish Princess promises to be the most exciting chapter yet. Beginning their research during production of The White Princess, they were keen to understand the place of people of colour in 16th century London. Historical advisers suggested diverse characters would have been an anachronism for the period, which Frost admits “really pissed me off,” as she already knew that wasn’t true.

“What we discovered without breaking too much of a sweat is that Catherine of Aragon came to England with an incredibly diverse entourage of people, notably including an African Iberian lady-in-waiting called Catalina de Cardones, who we call Lina in the show,” reveals Frost, who was also the showrunner of The White Queen and The White Princess.

“This woman exists as a footnote in history but no one has ever bothered to dramatise her or acknowledge she was there. What we know is Lina married another African in London, Oviedo, and it was very unusual in this period for people of colour to marry each other. So this is a really extraordinary story of these two African people in early Tudor England marrying each other and being very much part of the world of the court. So there is a whole new massive piece of this story that is reappropriating history for people of colour as well as for women by telling this story of these two people who really did exist.”

Graham says The Spanish Princess also looks at issues of class and social mobility in a way the previous versions weren’t able to. “The White Queen and The White Princess were both very much about the Yorks and Lancasters and all of it was at that level. Now we can tell stories that take place in the taverns, the streets and the way their love story unfolds,” he says. “The other thing you get a chance to do is tell what could not be a more pertinent story about immigration. There was cultural wariness of people who came from a different country. Frankly, though, in Tudor London you were wary of people who came from Wales. It wasn’t the colour of the skin that was the issue, so that’s quite nice – here we are with two black people in the middle of Tudor England and we don’t tell a story about racism.”

Like The White Queen and The White Princess, every scene in The Spanish Princess is from one of the leading female characters’ points of view, with Catherine and Lina joined as the main protagonists by another Iberian lady-in-waiting, Rosa, and Maggie Pole, who also featured in The White Princess. Meanwhile, Margaret Beaufort, the mother of Henry VII, is still very much a key player and antagonist-in-chief, Frost says. “There are various very strong conflicting female points of view that interweave or fall in behind Catherine. She’s the main character but we always have these other incredible strong women in the show.”

Frost argues Catherine is much maligned by history, overshadowed by Henry VIII’s later wives, particularly those who lost their heads in the process. “She’s characterised as this unwanted old bag, but it’s a phenomenal story that’s very pertinent to the 21st century,” she adds.

Catherine’s arrival from Spain is used to great visual effect in the series, contrasting the bright sunshine and rich colours of her homeland against the dark, gloominess of England – a place of shadows and people whispering in corridors.

“She’s a breath of fresh air but she’s also not to be trusted. She brings her own culture,” Graham says of Catherine. Frost notes that the character’s arrival in the country allows the show to observe Tudor England from an outsider’s perspective, something not possible in the previous iterations.

“That’s a really exciting point of view shift because now the Tudor world is the ‘other’ to the world of our heroine,” she says. “That allows for all sorts of other conflicts. There’s also an incredibly exciting theme running through the show about faith, because the Inquisition is beginning in Spain under Isabella, Catherine’s mother, and several of her entourage are Muslim, so they have to deal with their feelings about what’s happening in Spain and what Catherine’s real allegiances are. There is a world where the Catholic faith is no longer the only gig in town for a lot of characters who have always peopled the show. So we’re able to explore lots of thorny issues around conflicting ideas about faith, God, forgiveness and redemption.”

Leading the drama as Catherine is Charlotte Hope (pictured top), who was cast following an international search across Europe and North America. Frost and Graham were looking for someone who could embody the strength and vulnerability of the princess. That Hope (Game of Thrones) looks eerily like Catherine was a bonus.

“Charlotte just looks like her,” says Frost. “She has this strength, this fragility, and she’s just grown into the role. It was very hard casting a lead because there are so many factors to consider, but she is the most talented, hard-working, wonderful actress. We just love her.”

Graham was watching from the sidelines while his real-life partner Frost ran The White Princess, living and breathing Tudor England through her work. So when she suggested they do the next one together, he jumped at the opportunity to work alongside her and share the endless responsibilities of a showrunner – a role they had both previously performed separately. They say every TV show they both work on in future, they will do together.

Frost also welcomed the introduction of a male viewpoint behind the scenes. “Even though the show is told from the point of view of women, the male characters really matter, and trying to write a young Henry VIII – a complex, mercurial, intelligent, likeable, flawed and dangerous man – it’s been fantastic to have Matthew’s voice coming into that as well.

“Every single TV show we are working on now we do together, so we’re showrunning everything we do in TV. We break the stories together, we write the pilot together and then, moving forward, we write episodes separately and give each other notes. Then Matthew’s brilliant at all the bits in production that I’m hopeless at.”

Behind the camera, Birgitte Stærmose (Norskov) directs the first two episodes and Maya Zamodia is the DOP. Graham also got to try his hand at directing, picking up some battle sequences and palace-set scenes in Spain. Production designer Will Hughes-Jones (The Alienist) and costume designer Phoebe de Gaye (Killing Eve) return from The White Princess. Composer Samuel Sim is adding the music to the production, which Graham says won’t feel like “your grandmother’s period drama.”

“It’s got to have a buoyancy and momentum to it that feels fresh and cinematic and youthful,” he adds. “That’s one of the big things in production we’ve gone for.”

Frost picks up: “It’s a tremendously ambitious show. For the budget, what we’ve achieved is extraordinary. We’ve all had to be really inventive about how we cut our cloth and how we make the show.”

Distributed internationally by Lionsgate, the series is produced by New Pictures and Playground and is due to debut early next year. Frost and Graham, however, are already working on a second season of The Spanish Princess, which will continue the story of Catherine of Aragon – one Frost likens to Walter White’s journey from idealism into darkness in Breaking Bad.

“This doesn’t have the same darkness but it does arguably have more tragedy. Ultimately, it’s the story about the lie,” she adds, referring to Catherine’s claim that her marriage to Prince Arthur was not consummated before his death, thus leaving her free to wed Henry and become queen.

“Our whole exploration really is an exploration of that decision she makes and whether she’s lying or telling the truth and the consequences of those actions. It’s a really strong female story of a woman trying to define her place in the world. It’s very familiar [to modern audiences] in that regard.”