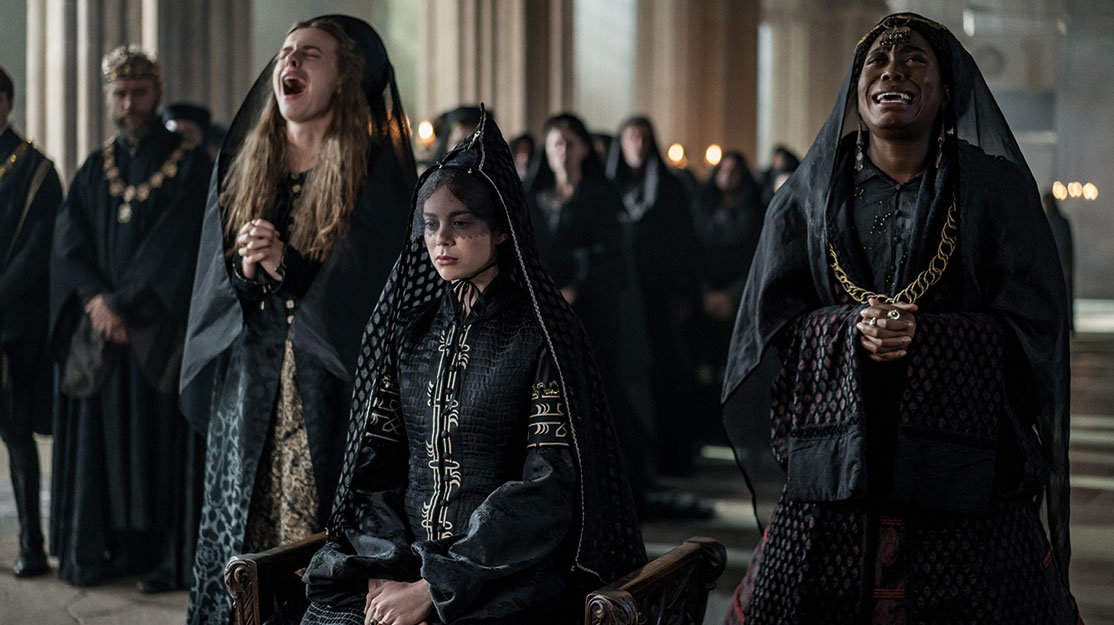 Emma Frost, co-showrunner of Starz drama The Spanish Princess, discusses finding the balance between historical truth and dramatic storytelling in a key scene from the series, which is produced by New Pictures and Playground and distributed by Lionsgate.

The Spanish Princess is the third instalment in the English historical series I’ve been doing for Starz, following The White Queen and The White Princess. It’s loosely based on two Philippa Gregory books, The Constant Princess and The King’s Curse, and is about Catherine of Aragon, who arrives from Spain to marry Prince Arthur.

There’s a scene in the third episode that we probably discussed more than any other in the whole show. It deals with the death and funeral of Arthur. As dramatists and producers, we know that anyone with a passing interest in history knows Arthur dies. So how do we write it? How do we produce it? How do we bring something fresh to it?

In terms of the filming, the scene is hugely ambitious in scale. We filmed it in Wells Cathedral in south-west England. Our wonderful director, Daina Reid, was very ambitious and had so many great ideas for this scene, but we had one day to film this huge funeral procession. It was a real military operation. The practical production challenges were immense.

There is a lot of historical record of Arthur’s funeral. When you have historical facts for any story, it presents unique challenges. You need historical advisors, but it’s one of the peculiarities of this show that we endlessly have to fight back against the truth, because our show is so much about power play and politics.

We can’t have a scene where characters are saying treasonous things within earshot of guards or clergymen who would be loyal to the king and would go off and immediately tell him. So one of the things we had to really police is well-meaning historical advisors who tell you to make all these people stand in one place because that’s where they were on the day, while Matthew [Graham, co-showrunner] and I endlessly have to go, ‘No, all those people out.’ It undermines the scene and the storytelling because this is a scene that cannot have eavesdroppers.

Spectacle isn’t story. It’s really easy to fall into a trap where you stop telling the story, forget about characters and suddenly just design a wedding or a funeral and spend a ton of money on it. There’s an endless challenge for us about how to combine spectacle with narrative and make sure every unfolding scene or sequence is driving deeply into character and story so it’s really earning it’s place either emotionally or narratively, and it isn’t the equivalent of a song and dance number where the story stops.

One of the things we discovered was that Sir Richard Pole, a nobleman who brought up Arthur for most of his childhood in Wales, rode a huge horse through the church, snapping Arthur’s staff across his knee and laying it on the coffin. When you read that, you think it’s amazing. But then we discovered Catherine rode to the cathedral on a donkey. This was about her own sense of humility. She wanted to be a woman of the people; she wanted to be on their level.

In the first version of that sequence, we had Catherine on a donkey and then the horse in the cathedral. But the horse is simply spectacle, whereas Catherine riding the donkey is all about character and story. So the decision was made to lose the horse. It would have been great but we all felt it was gilding the lily and would have been one of those things where historical truth gets in the way.

We also wanted to find the emotional centre of the scene. Everybody is grieving but we tell the story through the female characters, so the three women for whom this is most significant emotionally are Catherine, whose husband has just died and whose fate has been thrown into uncertainty; Lizzie, Arthur’s mother; and Margaret Beaufort, who is the political player and is now wondering what is to be done with Catherine – as Arthur’s death means Lizzie’s second son is now in line to sit on the throne as Henry VIII.

Our story is about Catherine and her entourage coming in and bringing their own culture with them. There’s a practice called keening – crying out to express grief – that cuts through many different faiths and cultures, and it’s so un-English and beautiful. So we focus the scene on the elements that felt pertinent to our characters so they weren’t just historical realities recreated.