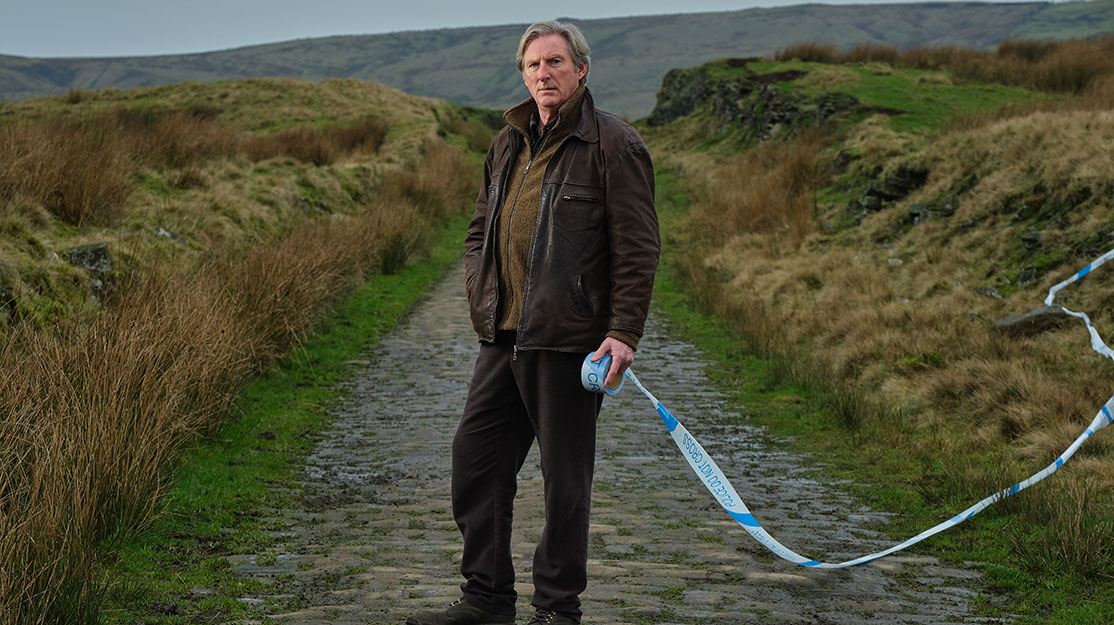 The road to Ridley

Line of Duty star Adrian Dunbar is back fighting crime as the title character in ITV detective drama Ridley. He tells DQ about fronting a series for the first time, Ridley’s musical inspiration and why he’s in no mood to retire.

Dunbar has become synonymous with his character in the BBC thriller, Superintendent Ted Hastings, the always quotable commanding officer of Anti Corruption Unit 12 (AC-12) who has become as known for his catchphrases – “Now we’re sucking diesel,” “Jesus, Mary and Joseph and the wee donkey” – as his determination to break the organised crime group operating within his ranks.

Yet a year after Line of Duty concluded – for now – Dunbar is back on screens in ITV crime drama Ridley, although retired police detective and singing jazz bar owner Alex Ridley is quite a departure from Supt Hastings.

That he had a hand in shaping the show’s scripts and the character he would play also appealed to Dunbar, who reunites with his Blood executive producer Jonathan Fisher for the series, which begins on Sunday.

“We worked very closely on the script and therefore I knew I wasn’t blindly going into something I would have quite a lot of input into what the character was like and I was able to push the piece towards something I was very comfortable in, given that he had a lot of unique qualities and qualities that were different to Ted and that type of policeman,” Dunbar explains.

“First and foremost, it’s me stepping up as the titular character. That’s quite a big thing to take on, and I did have a lot of control and a lot of input into what he was going to be like and what his background was. It wasn’t a leap in the dark. I was comfortable doing it.”

Ridley introduces the retired detective who is grieving the tragic deaths of his wife and daughter in a house fire. But when his former protégée and now head of investigations DI Carol Farman (The Fall’s Bronagh Waugh) asks him to help solve a complex murder case, he returns as a police consultant to revive their partnership together.

Across four two-hour films, Ridley will help investigate the murder of a farmer that might have links to an unsolved missing persons case; the death of a woman leading a double life; a murder linked to the missing brother of a jazz singer; and the suspicious death of a man who fell from his balcony.

Created and written by Paul Matthew Thompson (Vera) and co-created by producer West Road Pictures MD Fisher, the series is inspired by real-life retired detectives who rejoin police forces as consultants. All3Media International is the distributor.

Ridley, says Dunbar, is a former high-level police officer who found himself working in a northern English town as he headed towards retirement. His grief and isolation is palpable at the start of episode one, while one of the intriguing elements of the series is the relationship Ridley has with the man put behind bars for killing his wife and daughter – a storyline that runs through all four films.

But he finds relief from his loneliness – and the chance to dust off his investigative skills – in a call from Farman, who asks him to help solve a mysterious death.

“It’s probably the best place for him to be,” Dunbar says of Ridley’s return to work. “Also, what’s interesting through the series is he does find a lot of empathy with those other people who are, like himself, in some kind of grief. But he’s a complicated character. You don’t immediately warm to him. It’s going to take a little bit of time to understand where he’s coming from.”

His return to work comes with the added strain of now reporting to his former protégée, a fact he sometimes struggles to accept. “But I don’t think there’s too much friction,” Dunbar says. “They both really respect each other, that comes across, and she knows how to handle him. Bronagh is really good at how she approaches the part and allows him the space to be his grumpy old self on occasion. It’s an interesting dynamic; it’s one we haven’t really seen a lot before.”

Playing the title character in a series for the first time, Dunbar admits he felt a “really big responsibility,” especially as he has had so much creative input into the series. “There’s a lot of me here, and I felt very responsible for all that. When you come off the back of creating a really interesting character in Ted Hastings, you don’t think you’re going to reach those heights ever again, of course. But you want a character that the audience can engage with and feel for.”

Ridley is the heart of the series, and a character Dunbar hopes viewers will find empathy with as he steps out with Farman to solve a series of puzzling deaths. The story-of-the-week element to the series was “a different acting challenge entirely” to the serial nature the actor enjoyed on Line of Duty, but one he says was equally interesting.

“On the one hand, you had Ted, who was relentlessly pursuing a person or group of individuals he identified as being the baddies and was able to single-mindedly go after them. Whereas this is different because, as a detective, you’re presented with a series of possibilities of people who may or may not have committed a crime,” he says. “To that extent, the acting challenge is to, by turns, believe you’ve got the right person or indeed find yourself being taken in by someone who actually did something.

“You’re asking the audience, ‘Trust me, I’m going to make these decisions,’ and then sometimes you find out the decision you made had been wrong, that you’ve been hoodwinked and something else has happened. That’s a really interesting challenge that comes with this territory of whodunnit.”

What hasn’t been a challenge is identifying with the jazz-loving Ridley. Dunbar – who says Italy’s Inspector Montalbano is his favourite TV detective – championed a musical element to the series based on his own love of music and viewers will see him step up to the piano and perform songs by singer-songwriter Richard Hawley.

Dunbar started his own music career in a country band in the 1970s and later performed with an Elvis Presley impersonator. Then, during a lull in his acting career during his early 40s, he formed another band and started playing in pubs.

“Then, when we were putting this character together, I thought it would be really nice if there was a musical element to him I could play into,” he says. “The idea for the club came from the thought that, in his retirement, he was going to run his jazz club. The fact he was really interested in jazz and music would be a nice thing for him.

“When I was working on that, I really didn’t know who Richard Hawley was, to my shame, and then I came across his work and I immediately recognised that some of his songs would suit the character if he was to sing them in the club. Instead of us bringing standard songs to the party, things we all know and have a lot of baggage, here we’d be singing some new songs by a really well established and brilliant artist. That all came together as one of the things that’s a strong element of the piece. I hope the audience takes to it and like it.”

With a nod to the scripts by Thompson and Julia Gilbert (Agatha Raisin), Dunbar says Ridley is “slightly darker, slightly grittier” than some other shows currently on air – a fact that is enhanced by the noirish appearance of its northern England setting.

But while filming across Lancashire and parts of Yorkshire and the Lake District with directors Bryn Higgins, Noreen Kershaw and Paul Gay, “it was very chilly and quite cold at times,” the actor recalls. “We were up the hills in old barns and hay sheds and stuff like that and you needed your thermal undies on otherwise you might have been chattering while you were talking. But it was great. It’s got a lot of atmosphere. It’s a landscape that we don’t spend much time in. It’s quite bleak and isolated but it makes for beautiful pictures, and it’s another piece of the personality of the series.”

After a success like Line of Duty, Dunbar says people felt very secure in offering him roles in a similar vein, though he was never worried about being typecast and is instead “very grateful” for the opportunity to play a lead in his own series. “That feels very good, like a milestone hit.”

As such, the actor has no intentions of retiring himself any time soon. If anything, he credits Line of Duty and its creator, Jed Mercurio, with rekindling his television career and leading to roles in Jimmy McGovern drama Broken and dark comedy Inside No 9.

“It was a total game changer for me,” he says. “I’d been having quite a nice career. I was playing the guest lead in episodes of this and that, and I got my career in an interesting place. Then suddenly Line of Duty came along and for the first time in my life, I was in a returning series. I hadn’t done that before, I had no idea what that was going to be like, and then I was playing a character who very quickly turned into an iconic character for the public. They seemed to really latch on to this guy and so the recognition was huge. It’s going to be probably the defining thing of my career.”

Although season six of Line of Duty wrapped up the show’s long-running storyline about the identity of the corrupt officer known as H, Dunbar believes it isn’t the last we’ll see of Ted, Kate Fleming (Vicky McClure) and Steve Arnott (Martin Compston) on screen together.

“My thinking it no, it’s not the last you might see of us,” he says, speculating the prospect of a film, a pair of feature-length episodes or a three-part miniseries. “I have no idea what the storyline might be. I’m sure it would be something new, maybe something from past episodes that rears its ugly head again. There’s all kinds of talk. We’re waiting to see if someone gives us the green light and says it’s going to happen. We’ll wait and see.”

But did he speak to Mercurio about stepping into the role of another TV cop?

“I didn’t speak to Jed about it. That’s going to be interesting, to see what the gang make of it when they see it,” he says. “They’ve all been doing very well. Vicky’s done really well with Trigger Point, Martin’s been off doing all kinds of stuff and Jed’s been flying the flag exec producing all kinds of things. It’s up to me to come to the table now with my offering.”