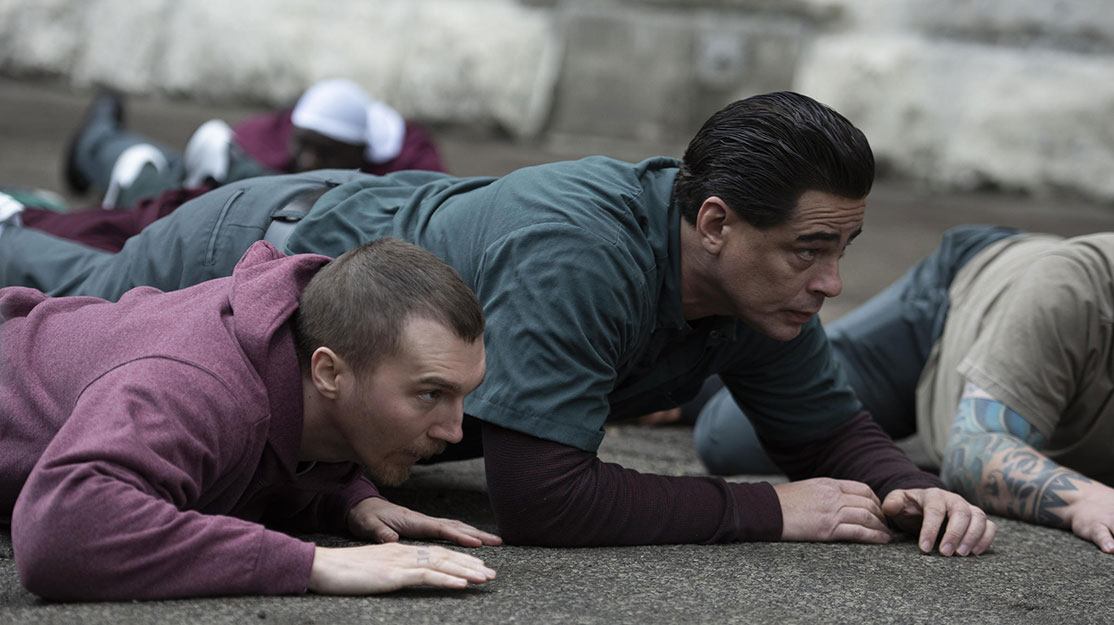 While two convicted murderers were on the run after breaking out of prison in June 2015, US television producer Nicholas Weinstock was mainly concerned for the welfare of his son, who was attending summer camp in the same area of Upstate New York.

“We were getting notices [from the camp] that two prisoners had escaped. ‘We need to advise you this camp is safe, but we’ve upped our security.’ It was terrifying,” he recalls. “So I knew about the event at the time but my producer brain wasn’t on!”

It was only after the event that Weinstock spoke to his Red Hour Films producing partner Ben Stiller about his idea to turn what became the largest manhunt in New York State history into a television drama, with actor-turned-director Stiller in Europe at the time to promote Zoolander 2.

So began the journey to bring to the screen Escape at Dannemora, the Showtime drama that debuted in November 2018 and has become one of the most acclaimed series of the past few years. Leading actor Patricia Arquette spent much of last year walking red carpets at awards ceremonies, winning a Golden Globe as well as Critics Choice, Screen Actors Guild and Golden Nymph awards for her performance, while Stiller was recognised by the Directors Guild of America. The series was also named best drama at the Monte Carlo Television Festival’s Golden Nymph Awards.

Benicio del Toro plays Richard Matt, an anomalous yet powerful force who masterminds the escape, while Paul Dano is his co-conspirator, David Sweat. Arquette plays Joyce ‘Tilly’ Mitchell, a wife and mother who works as an inmate supervisor in the prison tailor shop and agrees to assist the men after becoming romantically involved with both of them.

“It’s been fun,” says Weinstock of the ride he has enjoyed since the show aired. “We didn’t know it would be such a deep dive for almost two years of our lives. It was one of those obsessive things where every detail was exact and incredibly researched. Authenticity is so interesting because when you meet the real people involved, like David Sweat, and talk to the correctional officers, you start to lose a sense of the entertainment value and you just become obsessed with doing the real thing. So it’s been a fun surprise that it’s connected with so many people.”

If Weinstock wasn’t immediately thinking of how the real-life situation could be adapted for television, writers Brett Johnson and Michael Tolkin certainly were. “They became obsessed with it while it was happening and they started writing a spec script,” he says of the Ray Donovan scribes, who sent him two scripts for the first two episodes that were eventually combined for the opening instalment.

“I was sent the scripts at noon or something on a Tuesday and, by coincidence, my lunch meeting was cancelled. So I just sat and read the scripts. By 14.00, I had sent them to Ben and said, ‘We have to produce this and you have to direct it.’ He had never directed a sheer drama before. But we really looked at it as a movie we would portion out over eight episodes, at first. We combined the last two episodes into one, so it was seven episodes in the end, but it was really put together like a movie.”

Yet while the project – distributed by CBS Studios International (CBSSI) – raced through development, Weinstock says Stiller began to feel uneasy about it, unhappy that so many details of what happened inside the prison and conversations between Matt and Sweat were invented for the series.

“To Ben especially, that started to feel funky, because we’re making up a lot of stuff,” he explains. “It started to feel weird, so he was hesitant. Then months later, the Inspector General of New York, who was played by Bonnie Hunt in the series, the woman who’s conducting the whole investigation, came out with a published report of all her interviews. It was 150 pages, and we read it like a novel. We said, ‘Oh, there’s all the details. Let’s put those in.’

“We were fully committed once we knew the real story. It felt off to do a story that involves prisoners, victims of murderers, all the people involved and wing it on the details. That felt wrong.

“I feel like prison-break shows tend to take huge licence and be overly, almost cartoonishly, dramatic, with [prisoners] chipping out the wall and gunfire as they run. We wanted to do the opposite: a new kind of prison-break story that was more of a psychological study and was really human more than anything else. That meant we had to be really authentic.”

Prison dramas can also sometimes suffer from a jarring change in pace when the highly dramatic and tense moments leading up to the escape give way to quieter scenes once the prisoners are on the outside. But Weinstock says he wanted to embrace that change, making it “unexpectedly real” so that when Matt and Sweat do step outside the prison walls, there is no getaway car waiting to whisk them to safety.

“We wanted to go the other direction and show a more truthful story, which is that you get out and you don’t know what to do,” he says. “Even Benicio’s character says, ‘Maybe we should go back.’ We were much more interested in the human psychology of a guy like Matt, who was the mayor of the prison – the second he’s outside, he’s lost.

“Or Paul’s character, David, who was getting beaten up every couple days in prison and didn’t have his bearings and was a weasel and considered a cop killer and hated. The second he gets outside, he actually knows how to navigate and becomes more of a leader. That was the most interesting part to us.

“We wanted it to be a different pace from most prison things, but it does have, hopefully, an inherent pace because [viewers] know somewhat the story, you figure they get out. But even if you know the facts of the case, you don’t know it happens, so we liked slowing down when you expect it to speed up and speeding up when you expect it to slow down.”

Producing the series was “extraordinarily challenging,” he notes, particularly when it came to finding a suitably authentic prison within which to film. Stiller was “adamant” they shoot in the prison where it happened, which Weinstock says seemed “truly impossible.” But that is, in fact, where production took place, inside the Clinton Correctional Facility in Dannemora, New York, which first opened in 1845.

Filming also took in an abandoned prison in Pennsylvania and locations such as a water treatment plant outside New York City, whose basement pipe rooms replicated those inside the prison.

“It was 116 days with no hiatus. It was a long shoot, much longer than most movies I’ve done.” Weinstock says. “Benicio hadn’t done TV like that before and for that long. It was an endurance test for all of us. And we were staying in tiny motels in upstate New York, far from big cities. It was interesting.”

Providing a unique contrast to working on Escape at Dannemora was another Red Hour series Weinstock was working across at the same time. In the Dark introduces Murphy (Perry Mattfeld), a hard-living, hard-drinking, disaffected 20-something with a penchant for cigarettes and casual sex, who is also blind. Her life comes crashing down when she discovers what she believes is the dead body of her closest friend, but when the police come to investigate, the body has disappeared, leaving Murphy determined to discover the truth.

“It was interesting working on both shows at the same time. They’re very different,” says Weinstock. Red Hour produces the series for The CW alongside CBS Television Studios and Warner Bros Television, with CBSSI again distributing.

“It started with the head of The CW, Mark Pedowitz, who called me and said they had a company retreat at The CW and had hired an inspirational speaker to rev people up. The speaker was from Guide Dogs of America. He said, ‘I think there’s a show in here. I don’t know what it is. Would you think about it and develop something in that arena?’”

Weinstock called his “favourite” writer, Corinne Kingsbury (The Newsroom, Fam), and asked her come up with a story about an unconventional blind character for whom the audience wouldn’t feel sorry, who is throwing her life away and stumbles upon a murder. “Corinne just sort of ran with it. She actually started by texting me scenes like, ‘Wouldn’t this be funny?’ And we built it and it turned out to be a lot of fun. We have guide dogs all over our set and a lot of blind actors.”

Leading actor Mattfeld isn’t blind, but the production was supported by several blind actors, writers and Guide Dogs of America’s Lorri Bernson, who is a consultant on the series. Season two begins tomorrow.

Though In the Dark is aimed at a different audience from Escape at Dannemora, Weinstock says the show had the same mandate in terms of authenticity. “There are a lot of blindness cliches on TV and in the media. Perry actually became best friends with our consultant, so she watched her, she used a cane at home for months and got into it. We all went to a blind restaurant run by blind people where you eat in the pitch dark. So it was really a question of empathy and authenticity on that.”

Weinstock sees the changing relationship between television and movies at the centre of the current dominance of the small screen, which is being buoyed by a plethora of streaming services launching around the world.

“It was very sort of ‘church and state’ in terms of movies and television. We’ve always done about half and half [at Red Hour]. Now, I feel like it’s just a very porous wall and the division has been broken down,” he adds.

“Modern movies and TV are both really ambitious but, especially in TV, you can be much more specific. It used to be that you built every show and said, ‘How many people can we get to watch this? Oh, we forgot a teenage character, we need to put a teenage character in.’ Now it’s almost the opposite – what’s a world that nobody’s seen before? Let’s just do a deep dive about that specific world. And that’s actually creatively more fun than catering to a broad base.”

tagged in: Escape at Dannemora, In the Dark, Nicholas Weinstock, Red Hour Films