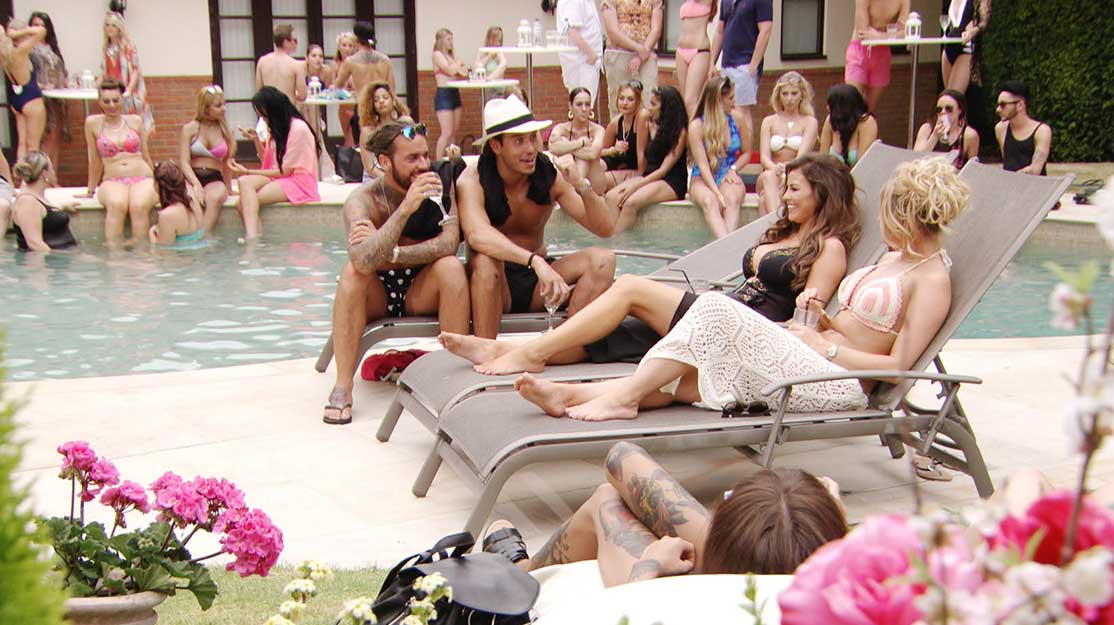 The only way is unscripted: Tony Wood pushes the boundaries

The Only Way Is Essex co-creator Tony Wood tells Michael Pickard how he tries to push the boundaries of drama, with or without a script.

But now he’s doing it without the script.

Wood was integral to the development of ITV unscripted drama The Only Way is Essex (Towie, main image) – and his latest series, Desi Rascals, is currently airing its second season on Sky1.

The show, which Wood created with Gurinder Chadha, follows the real-life drama of a group of multi-generational British Asians. The cast also interacts with fans in real time on social media, with each episode incorporating their online reactions to the events on screen.

Wood says his desire to create the TV equivalent of a social media network was the impulse behind both Towie and Desi Rascals.

“I was also becoming increasingly interested in how people react in an unmediated way when you confront them with circumstance,” he explains. “The more I thought about it, the more I thought Desi was a world we didn’t see on British TV. So Gurinder and I collided into the idea that we should just put a camera on this community and post-produce it in quite an intrusive way, and play it back to them and see how they react. That was the general notion.

“Beyond that was the sense of looking at the black and minority ethnic (BME) debate that exists. People weren’t really giving BME communities a chance to tell their own stories. So at the heart of Desi is the fact that we ask them what they want to do, we don’t tell them what to do, so you end up engaged in a different cultural debate.”

For the ongoing second season of Desi Rascals, filming for all eight episodes is taking place across just four weeks, with each episode being shot in just three days. As the show is aired weekly, the producers and editors have plenty of time to build stories from their footage.

Wood says: “It’s important it’s for real, because I might as well make a (scripted) drama if it isn’t for real. It would be better performed. But then in the edit suite you take a dramatist’s eye to it and you start to make properly subjective editorial decisions. You take a partisan view on who’s driving a scene or who’s the most interesting person.

“Unlike a scripted piece where you have a clear focus, frequently in these shows you might have 30 minutes’ worth of material that you’ll reduce to two or three minutes, so you have to get a sense of what happened and then of how people felt about what happened.”

Ex-Lime Pictures creative director Wood fell into unscripted programming when he was asked to create a UK version of hit US series Laguna Beach for MTV. He then partnered with All3Media’s Ruth Wrigley, who worked on the first three seasons of Big Brother, to create Towie.

Wood says that beyond the chance to work with non-actors – an opportunity he found “really exciting” – he was also becoming more interested in the changing form of television.

“For a lot of my career, I’ve felt we’ve been too straitjacketed by not being able to have a conversation about form, so it became an exciting proposition,” he says.

“Towie was interesting to do because we wanted something where you weren’t quite sure (what it was). All the pre-publicity said it was real but we very deliberately post-produced it in a way that made you feel it couldn’t possibly be real.

“Running through the whole thing was a series of contradictions and paradoxes. That was partly to lock into the Twitter generation, where marketing had shifted. You were no longer telling the maximum number of people ‘this is great.’ Essentially, you’re starting a fight. You’re telling viewers one thing, making it look like another, and then you’re creating a debate that causes them all to gain a sense of ownership of their point of view, before getting them to look again more deeply. That was the intention. It was great that people didn’t quite know what to make of it, that was deliberate.”

But does unscripted drama sit alongside its scripted counterpart, or should this emerging genre be held at arm’s length? Wood says the two can exist side by side, and again suggests TV drama has been stuck in a rigid structure for too long.

“I think it sits quite comfortably with scripted drama. Whether that’s the case for the broadcasters yet remains to be seen,” he says. “It sits comfortably because it’s all about telling stories, and if there are tales to be told that might be psychologically interesting, even in their trashiness, I think that has value.

“There are plenty of different ways of unlocking stories and it doesn’t mean one is any more valid than another. It’s just that we’re locked into traditional structures of how we’ve told stories and we’re snobbish about it. Maybe we censor too much. They’re different types of programming but they’re all television.”

Wood also believes unscripted drama has been wrongly tarred by its most successful series’ reputations for being brash and tacky.

“I think there’s a real misconception of what this is as a genre because only Towie and Made in Chelsea have properly flourished,” he says. “All we’re really doing is confronting an individual with a set of circumstances, seeing how they react and using a drama style edit to augment emotion. It’s as simple as that. We’ve been painted into a corner by the success of a couple of brands.”

Returning to his notion of TV programmes as social networks, Wood predicts that unscripted drama will “expand massively” as online platforms such as Facebook and YouTube branch further into original programming.

“Any show that operates in the way ours have should sit somewhere with social networks so I wonder if they will flourish on the conventional, traditional broadcasters,” he says. “I guess it’s a commercial decision for them, but anything that converges those screens properly has got a massive future.”

Wood hasn’t completely shed his scripted roots, however. In 2013, he partnered with Cineflix Media to launch Buccaneer Media, which aims to produce scripted programming for broadcasters worldwide.

Then in June this year, ITV and Buccaneer announced new crime drama Marcella, which is written by Hans Rosenfeldt (The Bridge).

Described as a Scandinavian noir set in London, Marcella follows the eponymous police detective returning to work after a 12-year career break during which she got married and raised a family. But with her marriage at an end and her daughter away at boarding school, she must overcome the challenges in her personal life to deal with a spate of killings that echo a number of unsolved murders committed a decade earlier.

“It’s going well,” Wood says of the show, which is still in the writing stage. “We’ve had five different writers room weeks with Hans and it’s been a real joy to create the plot and colour in the characters after that.

“As with all the Scandi shows, it’s an incredibly full plot. In the past 10 years we’ve undersold narrative in British TV drama a little bit, so to sit there with a master storyteller, and for us to try to work out the narrative in such intense detail, has just been brilliant and a real lesson. You realise The Bridge was not an accident.

“Hans is quite brilliant. With every draft that comes in, the level of detail – sometimes that you haven’t discussed with him – is just extraordinary. It’s interesting because he writes the plot and characters emerge through it.

“With someone like Saga in The Bridge, for example, you can see how she emerged in that process. Watching our characters emerge, I can see that Hans writes the story so he feels secure in what he’s telling. With every draft the characters become more intense and surprising. I can see how he got to a character as dynamic as Saga.”

When it comes to drama, it’s clear Wood is constantly looking to push the boundaries and structures of television, with or without a script.