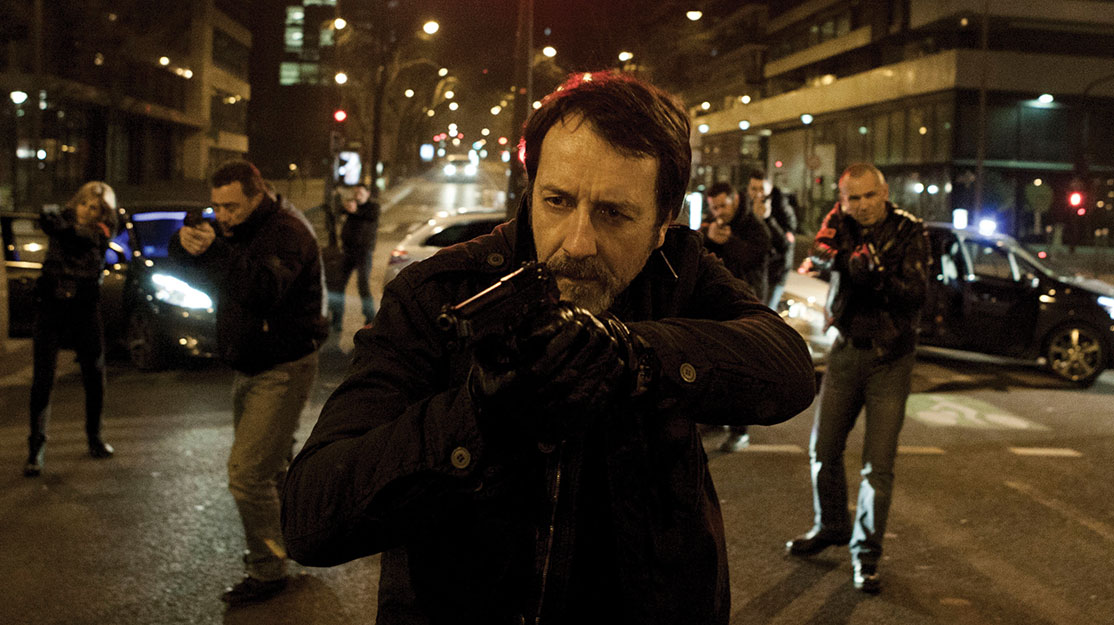 Boosted by a fresh approach from the country’s broadcasters, French drama is gearing up to cross borders – this time in English.

Winds of change are blowing across France’s TV drama sector, carrying with them a new generation of producers armed with an emphatically international vision.

Having watched its Northern European neighbours grab many of the drama headlines over the past few years, France – as one of Western Europe’s ‘big five’ TV markets – has some catching up to do.

Fortunately, however, the groundwork has already been laid, reflected in a notable shift in broadcaster strategy, production slates, sources of funding and now a range of projects to show for it.

“France is going through a new period where there are more good producers open to the international market,” says Emmanuelle Guilbart, co-CEO of the recently launched financing and distribution company About Premium Content.

Guilbart, whose background in French broadcasting includes stints at France Télévisions and Canal+, launched the company last year together with former Zodiak Media CFO Laurent Boissel to provide alternative means of gap and deficit-financing and distribution to indie producers in France and across Europe.

The force for change has been building for some time: France has the highest number of primetime slots for US series in Europe. The habit began in 1992 and has resulted in a big shift in viewing tastes: 52’ episodes, multimillion-dollar production values and different storytelling approaches.

But with top drama budgets of around €900,000 per primetime hour, external partners and/or coproducers are necessary for French broadcasters and producers to compete effectively on the international stage, explains Sandra Ouaiss, a former director of fiction acquisitions at Canal+. Ouaiss is currently coproduction adviser at Newen Content, one of France’s largest TV production and distribution groups, which includes Capa Drama (Braquo) and Telfrance (Plus Belle La Vie).

France’s broadcast ecology supports two private networks, public broadcaster France Télévisions, a swathe of smaller DTT channels on limited budgets, and pay TV network Canal+. However, Ouaiss says free-to-air broadcasters only have so much leeway when it comes to taking creative risks, given their mainstream audiences.

Guilbart echoes this view: “It’s not a justification, but it’s sometimes easier to be bolder, edgier and more original when you work with pay TV or cable-type series. It’s a little more difficult to do this for mainstream television.”

It was pay TV broadcaster Canal+ that really kickstarted France’s drama revival thanks to its Création Originale strategy and the freedom to commission edgier, riskier projects, such as Haut et Court’s supernatural series Les Revenants (The Returned), and before that the crime dramas Braquo (main image) and Engrenages (Spiral).

Capa Drama’s Braquo broke new territory in French crime drama when it launched in 2009, scooping an international Emmy in 2012. It is widely considered France’s answer to The Shield, says Ouaiss, and season four is now in production.

Canal+’s strategy extended internationally with high-budget coproductions, starting with Franco-German-produced Borgia in 2011 and continued in 2013 by The Tunnel, the Franco-British remake of Scandi thriller The Bridge, coproduced alongside Sky Atlantic and Shine.

Underpinning this approach is a growing willingness from French producers to shoot projects in English, says Ouaiss, with French viewers accepting local dubs. This shift is opening doors to a greater range of high-end international projects.

“It’s an interesting example because we’re telling a piece of French history, written in English and shot in English,” says Ouaiss. “English has become the convention, and it’s not seen as a problem for a series on French history to be in English.” Think The Queen shot in French.

However, local productions have also demonstrated international potential. “It’s important to say that when we speak about ‘international’ productions, people often think English-language, à la Borgia, with a US showrunner. Actually, there are plenty of others such as Kaboul Kitchen from Chic or Les Revenants, and all those Scandinavian shows travelling everywhere, that are very local,” says Guilbart.

Moreover, the perception that it’s primarily Canal+ and Arte taking risks isn’t strictly true. Like Canal+, leading free-to-air channel TF1 has developed its own scripted strategy to compete with the US, using US showrunners and European broadcast partners on English-language productions to give it greater international heft. Projects include Crossing Lines with ProSiebenSat.1 and Taxi Brooklyn, adapted from Luc Besson’s movie Taxi.

“That’s how they can reach a €2-3m per hour budget,” says Ouaiss. “Everything comes from the broadcasters’ ambition to be able to be compared to the US series and to reach that kind of budget.”

But such risks come at a price, and not all have succeeded. “This is the business,” says Ouaiss. “You know you’ll have one big success for every five or six failures. In the US, 70% of new shows that launch each season are cancelled by the end of the year. At the end of the day, everyone learns and the failures won’t prevent them from innovating and moving forward.”

The six-part series, coproduced by France2, RTBF and Cinétévé and distributed by Newen, has already sold to Channel 4, while the US is considering a remake.

Guilbart says Witnesses demonstrates a new willingness to experiment with storytelling, moving away from the dominant tradition of closed storylines within episodes that “would make a series like Broadchurch almost impossible.”

Despite initially being considered a risk for France2, the original UK series of Broadchurch, from Shine-owned Kudos, was a hit on ITV – pulling in a 25.5% primetime share – and the French pubcaster is working on a remake called Malaterra.

France’s drama renewal is also steadily cross-fertilising movies with TV. For France this is a significant breakthrough, as film is regarded the higher art form in cultural terms, and TV content its lesser cousin.

French prodco Haut et Court, co-founded by Carole Scotta, is a prime example. The company entered into TV, taking the director-driven film model in the form of writer/director-driven series, says Scotta. The move came at “a moment when we felt the appetite for different kinds of shows was growing. Canal+ was investing more in series and Arte was starting to finance series,” she says. “We felt there was a card to play that was not the exact kind of show made before.”

The company’s first TV series was Xanadu for Arte in 2011, but it was developing The Returned for Canal+ at the same time, based on the feature film it also produced.

Although Xanadu didn’t draw in viewers, the success of The Returned has since opened many doors for Haut et Court following its international release in French, says Scotta. As well as breaking into the US market with a remake deal with A&E Networks, Haut et Court is working on new projects with the UK, Italy and Israel.

The UK project, The Last Panthers (6×60’), is co-developed with Warp Films and Sky in the UK as well as Canal+. “There’s no majority partner – we’re all equal and it’s reflected in the casting and the team,” says Scotta. The Euro heist crime drama, shot in Marseilles, Montenegro, Serbia and London and in three different languages, follows gangsters from Marseilles to Serbia and will be delivered in the final quarter of this year.

Chic Films (A Prophet) has also applied its movie background to TV drama. Lauranne Bourrachot, a producer at the company, says movie directors now consider TV as a space in which to experiment with a wider range of storytelling formats, inspired by the arrival of shows like The Sopranos and Six Feet Under.

“We discovered a whole new way of telling a story, a story that sometimes can’t fit into a 90-minute script. We thought we had to try this in France, and thank God some broadcasters began to have the same approach,” Bourrachot says.

Chic Films’ slate includes the half-hour comedy Kaboul Kitchen, made together with Scarlett Productions. Two seasons, featuring a very French, grumpy anti-hero, have so far aired on Canal+, with a third now being written. The show scooped the Grand Prize at the Seoul Drama Awards (SDA) last fall, while FremantleMedia has taken the format rights, with a UK pilot being scripted.

In common with elsewhere in Europe, French productions are being hampered by a lack of scriptwriters. Bourrachot says there was “a long gap” between series one and series two of Kaboul Kitchen. “The problem is we lack writers and available ones, and some of them are doing feature films or other series for the same broadcasters,” she adds.

Haut et Court experienced similar delays between the first and second seasons of The Returned. Fresh from his debut movie Simon Werner a Disparu, Fabrice Gobert came on board Les Revenants, taking over as the series’ showrunner, writing all the episodes and directing half of them.

“We don’t have many writers and the ones we have are also very busy, so it’s a challenge to nurture young writers and really help. With season two of The Returned, we’ve surrounded Fabrice with other writers and tried to work together,” says Scotta.

Scotta believes France is around 10 years behind the more industrial-scale US writers room model, but insists “we’re learning as fast as we can.”

Hand in hand with France’s drama renewal is a more creative approach to funding French (and international) drama. “We believe the financing of audiovisual content, especially drama, is moving and changing, and there is not one way of financing a show these days,” says Guilbart.

Unlike TV, French movies have a long association with coproduction financing. Around 40% of all French movies are coproduced or cofinanced with foreign partners, according to Olivier-René Veillon. Veillon is CEO of the regional Ile de France Film Commission, which has launched a film fund across film and TV projects open to non-French-language productions. The reason, he explains, is that “we very much believe foreign productions have to contribute to the development of new trends of international productions in France.”

Veillon continues: “Recently, all the series that benefited from subsidies from the Ile de France region were French producers with international partners. That’s very good news and absolutely new because it was not the case two to three years ago.”

Veillon’s agency is currently partnering with foreign counterparts, such as Film London in the UK, to develop strong cross-border creative partnerships through initiatives like the production exchange scheme A Tale of Two Cities.

With Netflix now on the local scene and having commissioned scripted project Marseille from Paris-based prodco Federation Entertainment, the stakes just got higher for local broadcasters.

Veillon says its arrival should force local incumbents to up their game on the original-production front, as well as shake up France’s very ‘closed’ market, protected by regulations and laws.

Producers in general also welcome new entrants like Netflix as potential new partners, although work is needed to nail down the fine print over rights and windowing. “We all need to agree to what extent content rights will be granted and how we can exploit programmes abroad,” says Bourrachot. “That will be the big question.”

Newen Content is currently developing an ambitious international drama project on the scale of Vikings, featuring talent from Europe and the US, with Capa Drama leading the project.

“We’re looking for a commissioner, but not especially in France,” says Ouaiss. ”We’re going to talk to Amazon, Netflix, Sundance and others, and it’s a typical example of the fact that there are no more geographical boundaries.”