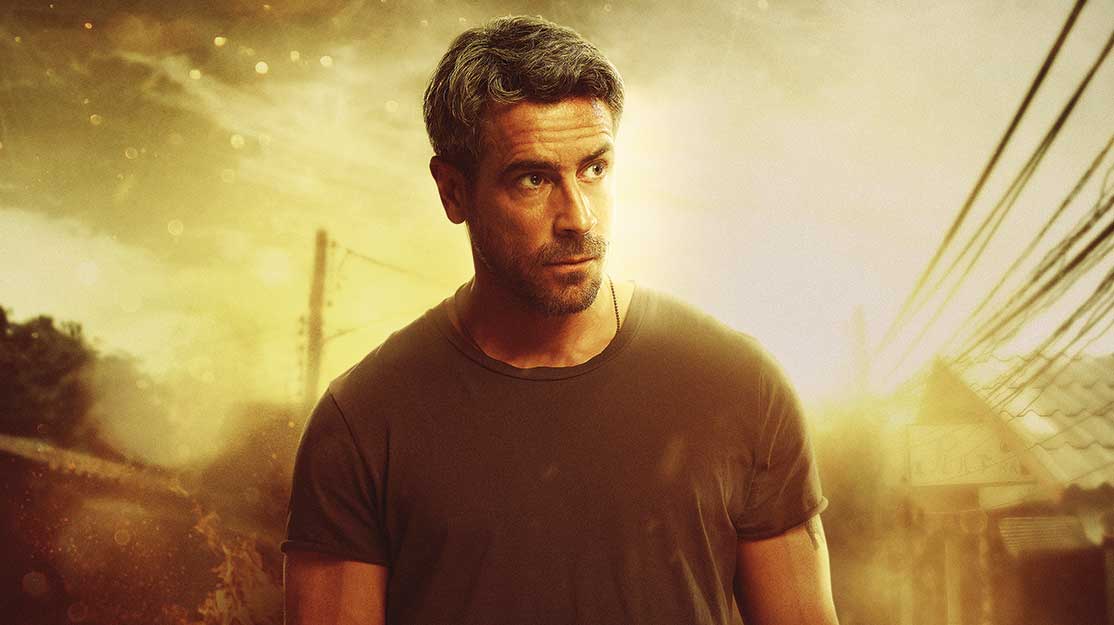 Set in Thailand, Farang is a landmark new series about love, betrayal and the complicated ties that bind a father with his daughter.

Former criminal Rickard (Rapace) has vanished. Fleeing Sweden and the old friends he has testified against, he abandons his name, his life and his family to start over in Thailand. Ten years later and still with a price on his head, Rickard knows that a return home would be a death sentence. And so he ekes out his existence as a small-time crook in the back alleys of Phuket. Life’s tough and dirty, but at least it won’t kill him. That’s the idea, anyway.

When his 15-year-old daughter Thyra comes looking for him, Rickard’s self-imposed exile in this gritty paradise is soon under threat. His attempts to push her away only drive her deeper into the dark underworld that Rickard knows only too well. After a momentary lapse in judgement, Rickard’s cover is blown and both he and his daughter find themselves in very real danger. Their only chance of survival is to strike back at those who are coming for them.

This story arc wasn’t always the path for Farang’s main character. Rickard was originally a policeman. He planned to start a new life in a Thai paradise, but throughout the development of the show, new angles began to develop and new people came along. So it all changed and he switched sides: from a cop to a criminal in the dark underbelly of paradise.

We found the most rewarding and yet challenging thing about the creative process in producing Farang was trying to keep a consistent voice and holding on to the uniqueness of the series through all of the different eyes and brains who have worked on the project over the years.

Another major change was that the eight-part series, produced by Warner Bros for CMore Entertainment and TV4 Sweden, shifted genre over the development period.

What initially started out as a light drama became a thrilling, edgy drama. Originally the show was about a policeman in paradise solving a minor criminal case, with tourists somehow involved in each episode, and with some added rom-com glitter.

We then felt we wanted to add a strong emotional theme to the series. We didn’t want the audience to know what was going to happen next – who would fool them, who would fall in love and who would be sacrificed.

So when this project and the scripts finally landed, it wasn’t so light anymore. We also needed time to tell the story in all its scope, so the thriller journey began and all of a sudden there was only one case left to solve over the whole season. We also found that it was far more exciting and complex if Rickard was a criminal with a hidden identity, on the other side of the law.

We then came to the visuals and the environment. The initial plan was to shoot the series on the sunny beaches of Thailand but, based on the above journey, we felt we had to move behind the postcard-worthy vistas. The new take on the story required something more.

We wanted to make a Scandi noir set in an exotic place to suit the story, but also to make it resonate with the themes, so all the reccies began to take place around corners, behind the glitzy hotels, away from the big streets. That’s how we built the universe of Farang.

The word ‘farang’ is used by Thais for people of European descent in Thailand, and usually denotes a foreigner. It sums up the feeling of unease and outsider-dom that pervades the series and Rickard’s psyche.

In terms of filming in Thailand, one small challenge was putting a very Scandinavian cast in a tropical location!

Ola Rapace’s character Rickard has been living in Thailand for 10 years and is consequently used to the warm climate. Rickard is comfortable walking around in jeans – even when the temperature reaches 45 degrees. Imagine the sweat on him after shooting 10 hours a day in jeans and boots for months in this heat! He lost one kilo a week.

Our lead actress, Louise Nyvall, who plays Rickard’s 15-year-old daughter Thyra, had similar difficulties. She arrives in Thailand in the first episode and then she has to stay pale throughout the whole series – a struggle when shooting for three months in sunny Thailand without getting any sunburn or a tan!

Ultimately we are hugely proud of the show and the journey it has taken to be what it is today. We hope viewers will be drawn into the world behind the glamour of a beach paradise, and delight in seeing a Scandi noir set among the palm trees.