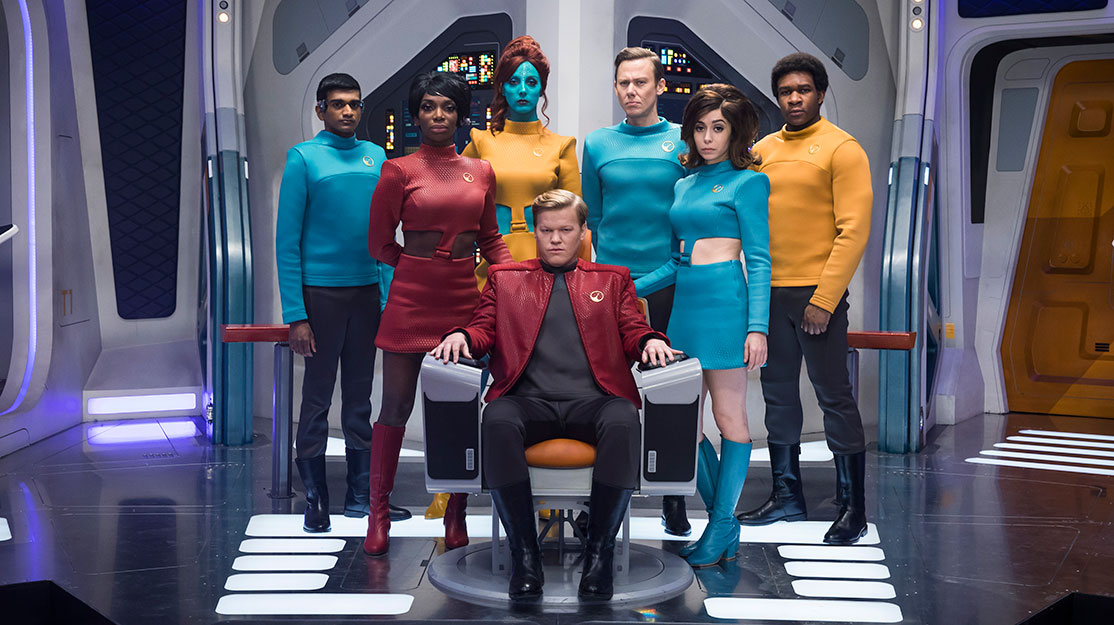 The future is now

Black Mirror creator Charlie Brooker has become rather adept at predicting future technologies and scientific advancements. With season four coming to Netflix, he and coproducer Annabel Jones reveal the writing and development process behind the anthology series.

The future can often look like a bleak and rather scary place in Netflix’s Black Mirror. That’s why when those in the scientific know tell the show’s creator, Charlie Brooker, that he’s unconsciously stumbled upon something they were working on, it terrifies him.

“We don’t really talk to scientists, even though we keep thinking that we should go on some fact-finding mission to Silicon Valley,” says Brooker, who writes and coproduces the hit anthology series.

“So when people whose job is to worry about the future say to me, ‘Yes, you were right about that,’ my only thought is, ‘Oh shit!’”

Yet Brooker has an uncanny knack of getting things right. “I am often surprised when something I’ve written about turns out to be true,” he adds. “Last season, I had one story called Hated in the Nation, which had little bee drones in it. They were terrifying, and it turns out they are real – I didn’t realise until after the show went out.”

The Waldo Moment, which debuted in 2013, foreshadowed both the rise of Donald Trump and Apple’s iPhone X, which allows people to become avatars on their phones.

“Sometimes when we’re doing a story, it resonates with something that’s going on in the real world, but that’s often a coincidence, or it’s accidental, or it’s just because that stuff was in the ether. The Waldo Moment is a good example, where actually it was about Boris Johnson on panel shows but then down the line it became more of a global thing than we probably realised at the time.”

But Brooker is clearly doing something right, and it’s not just his predictions. After starting as a cult hit on Channel 4 in 2011 before moving to Netflix for season three last year, Black Mirror won two Emmys in September and has rapidly become event television. Its range of often dystopian, sometimes beautiful and always challenging stories means the fourth season, due to land on Netflix this month, is eagerly awaited around the world.

So where does Brooker, a former television reviewer for The Guardian who started his working life writing about games for PC Zone magazine, get his twisted ideas? Instead of reading science periodicals and going fact-finding in Silicon Valley or even Silicon Roundabout, Brooker and his long-time coproducer Annabel Jones (their House of Tomorrow production company is part of the Endemol Shine Group) talk about their everyday fears and then think of ways adding technology to them to make things even scarier.

“Often it starts with just a general discussion about something like parenting and then one of us will come up with a ‘what if’ idea and we’ll ping-pong it back and forth,” Brooker explains. “I’ll be trying to think of the worst possible outcome and Annabel will challenge me by saying, ‘Well, that wouldn’t happen because…’ and I will say, ‘No, but it would.’ It is at the point where I realise I can’t shut up and Annabel is saying, ‘That sounds horrible,’ that we really think, ‘OK, we’ve got something here.’”

And then comes the hard work. “Writing can take two or three days, or sometimes a month, and then I hand it over to Annabel, she makes a load of critical marks and find myself getting defensive on every level,” he admits. “Sometimes I end up ripping it up and starting again – that has happened several times – or I just park an idea and start on another.”

If a script does pass the Jones test, there is almost inevitably some kind of rewrite when the director or even the cast come aboard.

The scary parenting idea turned into season four’s Arkangel, which explores what might happen if you could watch your child 24/7 with a sophisticated surveillance tool. The episode was directed by Jodie Foster, who immediately loved the story.

“Jodie had lots of thoughts and suggestions so I went back to redraft it,” says Brooker. “We were so flattered to have her on board and, of course, she is someone who understands privacy, who understands being in the spotlight and how you can control your profile in the world.

“Because she was, of course, a child actor she knows how to work with them and it was a pleasure to see her on set working and getting these great performances from the young actors.”

Meanwhile, when movie actor Andrea Riseborough was sent the script for Crocodile, a story set in Iceland in a near future when memories are no longer private, she immediately asked to play a different role, which meant Brooker had to rewrite the script with the lead character as a woman, not a man.

“Basically, the more people there are who get involved, the more flesh is added to the bones,” says Brooker. “Luckily, I find now that when I get to the end I can’t remember what it looked like originally. The finished product has always got so many things I would not have thought of.”

When it moved to Netflix, Black Mirror shifted from a three-episode season to six episodes, giving Brooker and Jones the space to push the boundaries ever more, with the duo determined that each story should have a very different feel.

“We feel that we can really explore and push the perception of what the story is without breaking it up,” says Jones, who has worked with her Black Mirror collaborator for nearly two decades. “On Netflix, not only can we experiment with the size and tone of a story but even with the duration. Working like this gives us so much more freedom to tell different stories.”

Since the success of Black Mirror, anthologies have become fashionable once again, as seen recently in another transatlantic collaboration, Electric Dreams, comprising adaptations of short stories by science fiction writer Philip K Dick for Channel 4 and Amazon.

However, Brooker says he deliberately avoids watching any competitors. “I think I would probably suffer crippling professional jealousy,” he reveals. “I tend to avoid things that I think might be in the same ballpark if I can, just because I don’t want to be shown up.

“People did tell me to watch [HBO drama] Westworld and [Spike Jonze movie] Her because they were similar to Black Mirror, but I’ve deliberately avoided them. I also don’t want to be influenced by them – they might put me off.

“But it’s flattering there are more anthology shows around. It’s not a format I’ve invented by any means; I nicked it from The Twilight Zone. It’s pretty much the oldest format in television history, but I think the advent of streaming platforms has brought it back into fashion. You no longer have to worry about an audience coming back week on week; it’s all just there in the magic streaming cupboard.”

For someone who conjures such chilling stories about the future, Brooker remains remarkably sanguine about the rise of technology and its impact on humans. He believes we just need to learn how to deal with it.

“You can’t put progress back in a box, that’s the problem – it won’t fit,” he says. “If you’ve ever tried putting an iPad back in a box, you can’t even do that! It’s weird, there’s a bewildering number of technological things we’re having to grapple with at the moment and we have to work out what the social rules are, basically. The closest analogy I can think of is the motor car, which obviously revolutionised transport and was a good thing but it took us a while to learn the rules; to have road signs, to work out road markings.

“We must have had a lot of accidents before we worked out a system of keeping everybody safe. It feels like there’s a hundred different motor cars being invented every week at the moment, that’s the difference, so we’ve got our work cut out. But what are we going to do, go back to xylophones and eating mud? No!”