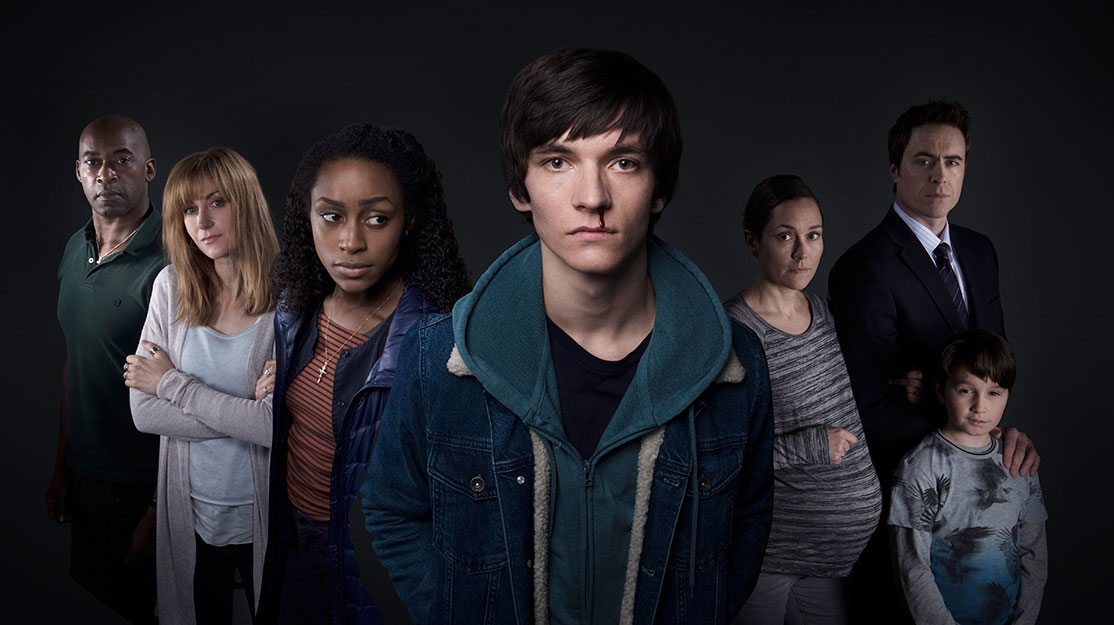 The domestic horror of HIM

Paula Milne discusses her latest TV drama, HIM, which she describes as her attempt at writing a male version of big-screen horror Carrie.

While horror has been a resurgent theme in small-screen drama in recent years – think The Walking Dead, Ash vs Evil Dead and American Horror Story – the stories are almost always rooted in an element of fantasy.

It’s notable, then, that ITV drama HIM is described as a “domestic horror,” with the plot playing out against the backdrop of a troubled family living in the heart of suburbia.

Created and written by Paula Milne, the story focuses on a 17-year-old boy (known only as HIM) who is trapped between the two homes of his divorced parents, each now remarried with new families. He is both a reminder of their failures in the past and a threat to their happiness in the future.

Riding a rollercoaster of emotions, he must also contain the terrifying secret that he inherited a supernatural power from his grandfather – a power that his grandmother urges him to use only for good.

And when his 17-year-old stepsister Faith moves into his family home, HIM is irrevocably drawn to her – but they both know their mutual attraction could have devastating consequences.

The three-part drama, currently on air in the UK, is produced by Mainstreet Pictures and executive produced by Laura Mackie and Sally Haynes. It is produced by Chrissy Skinns, directed by Andy De Emmony and distributed internationally by ITV Studios Global Entertainment.

Milne’s writing credits include The Virgin Queen, The Politician’s Husband and White Heat. And, having written political thrillers and cop shows, she was eager to turn her hand to another genre.

“ITV asked me if I would like to write something for them,” Milne recalls of the 2014 conversation that led to HIM. “I wanted to write a horror piece and I think boys get a bad rap, so I told them I wanted to do a male version of Carrie – and, fair play, they went along with it.

“It played to their strengths in the sense that I already wanted it to be set in suburbia and there’s the extended family/divorce stuff and race issues. It’s very contemporary but very ordinary. If the audience believes the ordinariness, they’re more likely to believe [in the lead character’s] power.”

Milne describes genre as “a great friend to a writer,” offering the potential to dress any story up in a variety of different costumes. The daughter of a film critic, the origins of her relationship with horror lie in her watching Hammer Horror and Roger Corman films, though the roots of HIM can also be found in her own family.

Married twice, divorced twice and with four children, the writer says she could see her youngest child Harry struggling with life in his teens and perhaps carrying the disappointment of his parents. She took this foundation and placed on top of it the confusion caused by an attraction to a step-sibling, being replaced by babies in two different homes, and academic struggles – in addition to harbouring a secret power.

“There were various elements I had already thought of and it seemed to be important he didn’t suddenly discover he had this power,” Milne explains. “That’s what happened with Carrie. The shock of that would then drive the whole thing and he would probably have to tell somebody. But if from a very early age his grandmother had seen he could do something, she’d have said his grandfather had the same power and told him to be very careful, so he was.

“But when his parents first split up and he uses his power to throw a cricket ball through the window, that’s when we start to see that his power emerges when he’s deeply emotionally affected and has no way to express it. What can you throw at this boy that could take him on a journey that might end in death – his or someone else’s?”

In the miniseries, HIM has the power of telekinesis – the ability to move objects without touching them. “You should be very specific [with the power],” Milne notes. “By being very specific and confident about the power he has and what he can and cannot do with it, you hope the audience will buy into it.

Before putting pen to paper, Milne carried out considerable research into telekinesis and found a whole new world in which to set her story.

“There are people who really do believe it and I needed to know why,” she says. “They feel marginalised and wronged and it was really interesting. So I started with that and then the key incidents of the family and the dynamics. I have a big sheet of Imperial paper and do a storyboard. I always knew it would be three episodes – a trilogy is good, satisfying number. Then you think about the events that lead up to the key incidents. Then there are lots of [story idea] bubbles; I number them, handwrite the scripts twice and then put them on the computer.”

In putting her vision onto the page, Milne also keeps her notes sparse. She doesn’t specify the exact look of a character, instead focusing much more on details such as time of day, or that viewers should not see a character’s face until a certain point in the story, for example.

Milne also forged a strong relationship with director De Emmony, who impressed her with both his technical skills and his interpretation of the emotional material in the script.

“That is quite unusual. Normally you get one or the other, but he was really good,” she says. “He had the challenges. It’s easy to sit there and write it, but he had to do it.

“To get the best out of people, they’ve got to inhabit it, they’ve got to own it. So the key time is in prep. We talk about the concept of the characters and what we’re trying to do. I also got Andy to meet Harry, my son, and showed him pictures of him at that time. So you get him to that place.

It’s not those early stages of setting the style and tone of a story that Milne most enjoys, however, but the payoffs that arrive as the plot winds towards its conclusion. She gives one example from the final episode, where HIM’s mother and father discuss him and their regret at how their own relationship fell apart.

“It shows what they went through and that they’re just ordinary people who make mistakes,” Milne explains. “You can’t get a scene like that except at the end when you’ve earned the audience’s interest in them. It’s really important to set things up well and delicately and nuanced, but the real payoffs are always at the end.”

For her next project, Milne jumps genre again and lands in Cold War Germany for 1970s thriller The Same Sky, which debuts in Germany on ZDF in January and then on Netflix around the world. The multi-stranded story concerns an East German Romeo spy sent to the West to seduce a British intelligence officer, a gay teacher trying to escape East Germany and a young girl who turns to steroids as she seeks swimming stardom.

“What was great about writing something like that was [the characters are] ordinary people going through extraordinary times,” she says of the six-part series – a departure from the decidedly extraordinary HIM who finds himself an outcast in very ordinary surroundings.