The art of the twist

From Sophocles to Shakespeare and Agatha Christie to Arthur Conan Doyle, great thriller writers have distinguished themselves by their ability to shock and surprise audiences. It’s no different in the world of TV drama, where intriguing setups, sudden changes of direction and disguised denouements are key to keeping viewers engaged. We ask writers of recent hit shows how they hooked audiences and kept them off balance until the reveal. 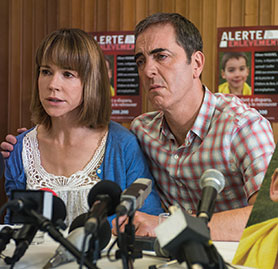 The Missing
Jack Williams wrote the BBC1/Starz thriller The Missing alongside his brother, Harry. Across eight episodes, fans tried to work out the identity of the villain who snatched Tony Hughes’ son, Oliver.
Discussing their approach, Jack says: “For us it’s about not treating characters as villains – every character needs to be three-dimensional and have their own back stories. That way, no one stands out more than anyone else, making it possible for anyone to be the villain. And for us it’s often more important why someone did it, rather than who did it.”
Williams says he and his brother always try to “play fair” with their audience, but stresses it is important not to underestimate them: “Audiences are very smart, and assuming they won’t get something is always the first mistake. Assume your audience is smarter than you and then try your hardest to surprise them.”
However, he doesn’t believe it is necessary to have endless twists and turns to keep fans hooked: “As long as the characters and emotional journeys are compelling enough, that should carry you through. You have to earn every plot turn and twist – if we believe what the characters are doing, any twist is much more surprising.”
In The Missing, the story focuses on the possibility that Oliver has been taken by paedophiles, and maybe even exported as a child slave. In the end, though, it’s revealed he was the victim of a bizarre accident involving the owner of the hotel where he and his family had been staying.
“The hotel keeper wasn’t the most obvious villain – in all the newspaper polls, he was very low down on every list,” says Williams. “But eagle-eyed viewers had worked out that he shared a surname with the mayor Georges Deloix and started to realise around episode six he might be involved. What interested us about the hotel keeper is that he wasn’t an evil paedophile. He was a drunk and a coward who made a terrible mistake.”
Indeed, it is Tony’s deterioration that is the masterstroke of the story, meaning viewers didn’t over-obsess on the whodunnit resolution. “We always wanted all our characters to be interesting in their own right, and for the audience to care more about their journeys than the whodunnit. We liked the notion that everyone would immediately be hugely sympathetic to Tony Hughes (James Nesbitt) – what he’s gone through is so awful and primal. But something like that would corrupt someone’s soul, and it was interesting for us to see how far that audience sympathy stayed with Tony as he went to darker and darker places.”
Asked about his favourite dramas, Williams picks out FX’s Fargo: “The first episode, when Martin Freeman’s character (Lester Nygaard) snaps and kills his wife with the hammer – it’s really well played and was very surprising. A brilliantly judged and executed moment.” 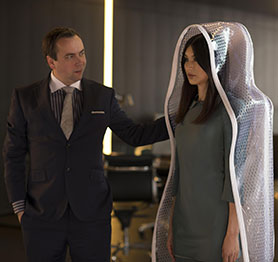 Humans
Sam Vincent and Jonathan Brackley are the writers who adapted Swedish series Äkta Människor (Real Humans) for the English-speaking market. A hit for Channel 4 in the UK and US cable network AMC, the show imagines a world in which ordinary people own robot servants that look like attractive young humans (called Synths).
Thematically, the show explores what is means to be human. It also uses the Synth idea as a metaphor for issues like race and migration, analysing the way that mobs can come to distrust and abuse ‘the other.’
The plot centres on a small group of Synths capable of independent thought. The sentient Synths are pursued by a government agency that fears their potential. But there are other unexpected twists that take the story in different directions. For example, young policewoman Karen is revealed as one of the thinking Synths who regards herself as a freak experiment.
This, say Vincent and Brackley, is their favourite twist: “Karen’s reveal as a Synth is such an unexpected, odd and striking image. And (actress) Ruth Bradley’s performance is wonderful – very coolly shifting into eerie Synth mode.”
Finding out that Karen was a Synth was, however, only a partial reveal because her motive still wasn’t clear: “It provided mystery rather than conclusiveness. The fact she’s a Synth didn’t necessarily mean she was an antagonist, nor did the fact she was looking for the other Synths. It was only in the penultimate episode we finally found out what it meant to her and how she was going to react.”
Vincent and Brackley were in an interesting position because they were working with an existing format. They say: “We can’t take credit for several of the key twists in the show, as they were created by the brilliant Lars Lundstrom for the Swedish series. But we did a lot of moving around and additional reveals to keep the audience on their toes.
“We were also wary of trying to hang on to big twists and hooks for too long. It’s good to keep your powder dry for the finale, but it’s also good to blow some up at the beginning – and in the middle.”
The audience response has been hugely gratifying for the writers, but not just because of the plot: “What’s satisfying is that people seemed to be talking about artificial intelligence, technology and the future. We always wanted to spark debate and that was reflected in the show’s coverage in the media – there were lots of articles discussing moral and tech issues beyond the show’s content.”
In terms of twists from other shows, they say: “We remember watching
the first series of 24 together and being blown away when Nina Myers was revealed to be the mole and killing (main character) Jack Bauer’s wife. More recently, pretty much every death in Game of Thrones has had us on the edge of our seats. For a show that’s famous for the indiscriminate dispatching of characters, it’s amazing how they manage to make it a heart-stopping surprise every time they do.” 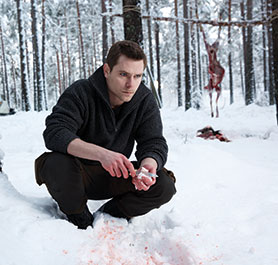 Modus
Modus is an eight-part thriller commissioned by Sweden’s TV4 from Miso Film. Based on books by crime author Anne Holt, the series is directed by Lise Siwe (The Bridge) and Mani Maserrat, and written by Emmy-winning Danish writers Mai Brostrøm and Peter Thorsboe.
The story centres on criminal psychologist and profiler Inger Johanne Vik and her detective partner. Vik is drawn into the investigation of a series of brutal murders in Stockholm after one of the killings is witnessed by her autistic daughter Stina. Vik discovers a connection between the case and a ruthless international network.
“Modus is about love and hate,” say co-writers Brostrøm and Thorsboe. “It is a dark, entangled contemporary tale about death and holy wrath.”
Brostrøm and Thorsboe are well-established writers, and for this reason have become wary of the genre’s cliches. For example, they try not to over-promise at the outset, despite the fact that producers often want a high-impact opening: “We try to hold back and not give away the story too quickly. There is always a risk for writers if they promise too much at the start of the story because it is difficult to keep on climbing towards the climax. In this case, the opening of the show involves a wedding, where we try to give the impression evil is coming, that something will happen.”
For similar reasons, Brostrøm and Thorsboe don’t over-emphasise the whodunnit or cliffhanger elements of the story. “We see this story more as a ‘whydunnit.’ This isn’t a story where everyone in the show could have done it… we wanted something with more realism. We learn the identity of the killer before the last episode but then explore the motives. This is a way of keeping the audience more involved in the structure of the story. They aren’t spending their whole time trying to guess the killer. We have questions at the end of each episode but not deadly cliffhangers.”
Having said this, they still feel all the usual pressures of trying to keep the audience on their toes: “You have to be like a magician, getting the audience to look at one hand as you do something with the other. There is a big twist near the end that we think will take the audience by surprise. Producers like to have twists.”
Writing a thriller based on existing novels has its own challenges, they admit. “On the whole it is not as hard as writing from scratch. But you have an obligation to the writer, the book and the fans, who you can’t cheat. At the same time, it needs to work for television. This story is actually drawn from three Holt novels.”
Brostrøm and Thorsboe add that there are advantages to working as a team: “We do a lot of talking about character and plot – we love to challenge each other and come up with ideas for crazy endings. In terms of how we work, there is always paper on the floor and the tables and pictures on the walls that help set the atmosphere.”