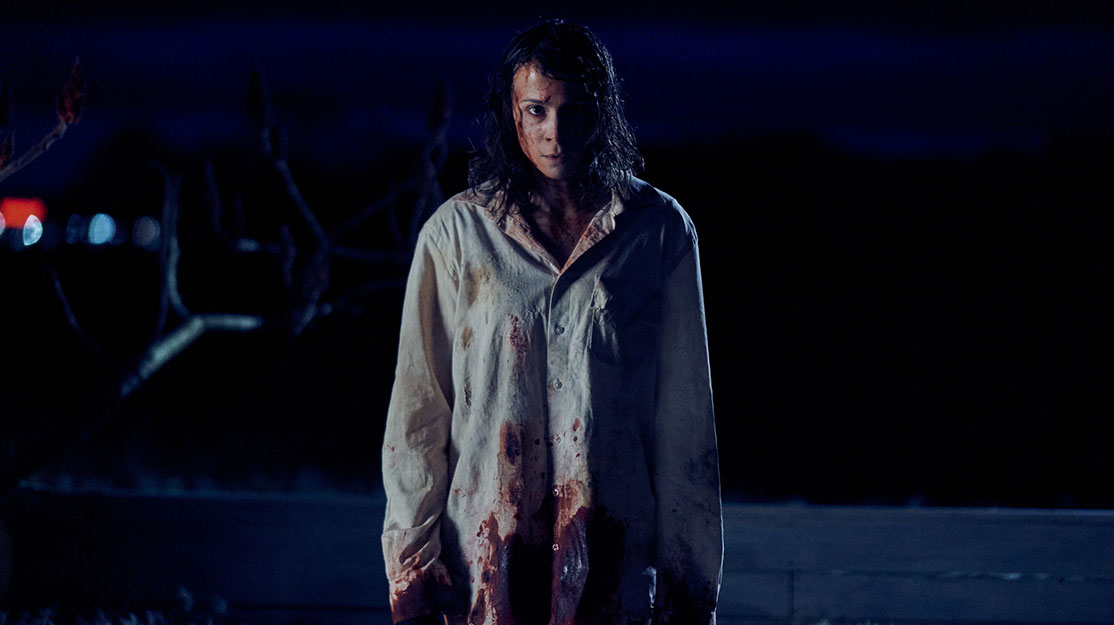 Aylin Tezel, the star of German thriller Unbroken, reveals how the series mixes elements of crime drama and psycho-thriller to tell the story of a police officer searching for her newborn baby after being kidnapped.

German drama Unbroken opens with heavily pregnant police commissioner Alex Enders saying goodbye to her colleagues as she begins maternity leave, her head swirling with questions about how her life and her relationship with her partner Leif will change once her baby is born.

Soon after, however, Alex is kidnapped and loses consciousness. A week later, she awakes to find herself covered in blood, suffering from memory loss – and no baby bump. Backed by her police colleagues, Alex then embarks on a tireless search to find her newborn child and solve the mystery of her kidnapping as she becomes entangled in a web of secrets and lies, risking her job, her relationship and her life to find the truth.

Here, Tezel, whose credits include Tatort and The Master Butcher, tells DQ about getting into character, her kickboxing training and why German television needs more heroines.

Tell us about the story of Unbroken.
The premise is unique: Alex, a tough, young cop – and nine months pregnant – is being attacked and disappears without trace, only to appear again six days later in a forest, covered in blood and without the baby in her belly. All she knows is that she gave birth, but she doesn’t remember where her baby is or what happened to her. And although she never really wanted this child, it now seems as if her life depends on whether she finds it.

How would you describe Alex?
Alex is a really tough, quick-witted and boyish young cop. She is a fighter and a leader; fearless and strong.

Alex goes through a terrible ordeal. How does she begin to find out what happened to her?
Alex has no memory at all when she first appears after having been attacked. Slowly, she starts to have flashbacks – moments that trigger her memory and dreams that seem to reveal bits of the truth.

How does the series mix Alex’s personal story with the parallel story of her investigation into the murder of a Romanian prostitute?
When Alex and her team find out a murdered Romanian prostitute had given birth a short while before her death, while her baby is nowhere to be found, Alex believes this case must be linked to her own. Her investigations lead her to a company for surrogacy and to a case of corruption within her own team.

What was the appeal of joining the series and playing Alex?
Alex is an exciting and complex female character. I’ve missed such female roles in German TV narratives. The success of Paula Beer’s investment banker in Bad Banks and Liv Lisa Fries’ young inspector in Babylon Berlin prove, also on an international level, that it is time for Germany’s TV world to answer a longing for complex and inspiring heroines. I also just loved Alex’s uncompromisingness. She is such a strong human being who is fighting for justice, come what may.

How did you prepare to play a mother separated from her baby?
I prepared this part together with my acting coach Jens Roth. We found the places in her body where Alex can feel her child and the loss of it. So whenever I went in to those heavy scenes, I could fall back on my preparation of her physical longing and pain.

What was your experience like filming the series?
It was one of the most intense shoots I’ve ever had. Being Alex for months, basically non-stop, as I was filming every day and also had training on the weekends, meant most of my energy went into this series. In the evenings, after filming, I was exhausted. At the same time, however, the high level of energy really pushed me forward and made me very happy.

How did you work with director Andreas Senn?
Andreas is such a kind and wonderful person and director. He has this really dry Swiss humour, which was nice in between scenes, as we were constantly dealing with such heavy topics in the story.
Andreas included me very early in the development of the character. Our writers, Marc O Seng and Andreas Linke, were always checking in with me about Alex’s journey. It was a beautiful collaboration right from the beginning.

Which scenes were particularly memorable for you?
The most vicious scene happens in episode five, when Alex reaches a physical and emotional peak. It’s a scene where Alex is in a hut in the forest fighting with one of the other main characters, which was one of the most challenging to film. At that point Alex doesn’t know who she really is anymore; her dark powers seem to take over.
I had been training for weeks at this point – especially in kickboxing and stunt training – to meet the physical challenges of this role, and the emotionality of that scene definitely amplified my strength.

What other challenges did you have to overcome?
One of the things I found out in my preparation for this character is that Alex is under so much perpetual stress and pressure that her heartbeat is constantly quite fast. It really worked for the character, but during the first few weeks of filming, I often lay in bed at night with my heart still racing. Although my mind could easily switch between the character and my own self, apparently my body needed a bit more time to adjust. It was a beautiful experience how strongly I connected with this role while I was playing her, but it was definitely a demanding part.

What can viewers expect from the series?
The power, the desperation and the fighting spirit of the heroine set the pace and the energy for this series. To follow Alex’s journey is an intense experience. For me, this series is a really good mix between crime drama and psycho-thriller.

Is Alex typical of the types of characters you like to play?
I’ve been quite lucky so far in that I have played a wide range of characters with very different experiences and personalities, and in different genres. That’s something I like in this field of work. The variety of stories and human minds that you can explore as an actor also widens your horizons on a personal level. Every film and every role delivers a new adventure; you never know what results will come out of this bunch of creatives who get together to create a story. Alex is definitely one of the strongest and bravest characters I’ve played. I like her drive.

What are you working on next?
I just finished filming a feature in Germany and Israel, directed by German director Pola Beck and produced by 7500 production company Augenschein. It’s an adaptation of Olga Grjasnowa’s novel All Russians Love Birch Trees. I play the female lead, Mascha, in a story about the search for one’s home.
I’m also working on my directorial debut. It’s an English-language feature, a love story set in Scotland and London. I’ve found amazing producers in Germany, Weydemann Bros, who have been very successful with Nora Fingscheidt’s debut System Crasher. We’re in the phase of compiling our financing and hope to shoot at the end of this year.