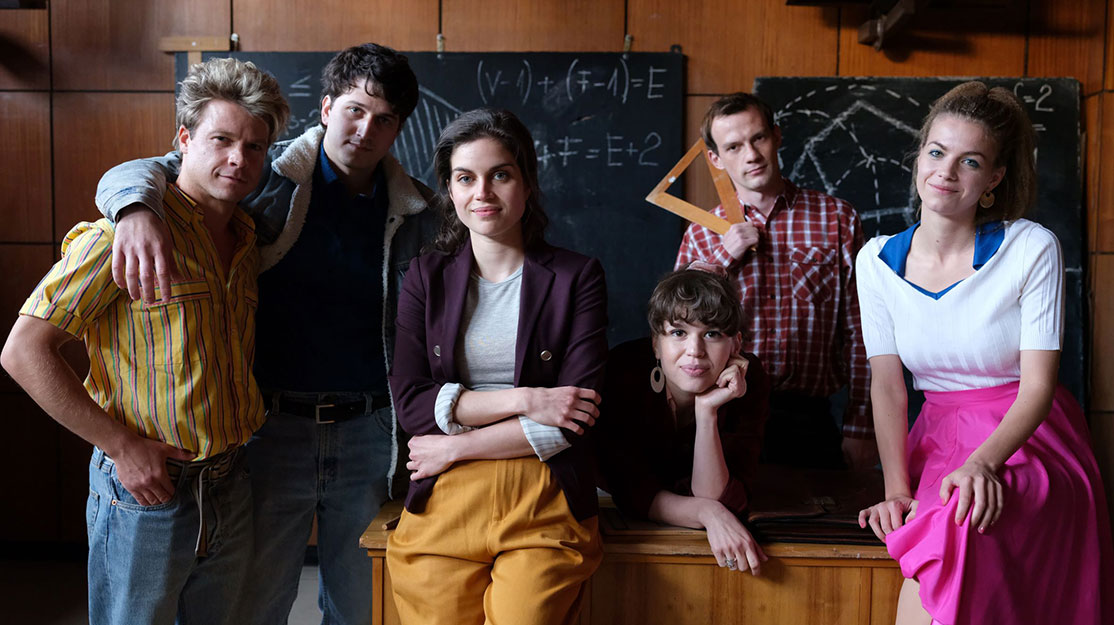 Telling on The Informant

Writer and director Balint Szentgyörgyi joins executives from HBO Max to reveal how they delved into the world of 1980s espionage for his first TV series, Hungarian thriller A besúgó (The Informant).

Ideas for a new television series might be pitched as a line in an email, a single-page story outline or in a series bible that sets out everything from the plot and characters to the style and tone of the show.

But when fledgling writer and director Balint Szentgyörgyi turned up for a meeting at the Budapest offices of HBO Max, he came armed with a filmed pilot and scripts for a further three episodes.

The story was A besúgó (The Informant), a 1980s-set spy thriller that unfolds in the Hungarian capital, where 20-year-old Geri is living a double life as a university student and a government informant. HBO liked the pitch and began developing it as an eight-part series, which debuted on HBO Max earlier this month.

“It was pretty unusual,” says Johnathan Young, HBO Max’s VP of original production for Central Europe. “We were in the process of making a show set in the 1980s in another country and we’d said we don’t want to be the place that makes 1980s shows.” But Gabor Krigler, who was running the Hungarian office and met with Szentgyörgyi, told Young he might want to change his mind.

“We read it and it’s just a great story, that’s the thing,” Young says. “People think that when we get scripts, we’re looking for problems. It’s the opposite – we’re just looking for a page-turner, and Balint’s script for episode one is pretty unchanged as you see it. As we went through the process, we did a little bit of work, but the beginning and the end were always what Balint envisioned.”

As a self-taught filmmaker, Szentgyörgyi says the decision to make a pilot himself came from a place of “anger and failure,” as the fact he didn’t go to film school meant he was unable to access support from official channels. Instead, he gathered his friends – a cinematographer and an actor among them – borrowed a camera and a microphone and spent 12 days filming his first script.

“When we got it made, I didn’t know anybody in the industry. The best thing I could do was Google HBO in Budapest,” he says. “I managed to get myself a meeting two months later, when I understood there would be an opportunity to screen the pilot we made. The best possible outcome would be the question, ‘We like it – do you know what happens next?’ The only obvious choice was to keep writing the show, even though nobody was asking for it and nobody was paying for it.

“When I screened the pilot at the meeting and they told me, ‘We like it – do you know what happens next?’ I was so delighted to open my backpack and pull out the scripts for episode two, three and four – half of the first season. They read it and I was very fortunate to then start a development project with them, and here we are.”

A coming-of-age story set in the world of political activism and espionage, The Informant opens in 1985 when Geri (Gergely Váradi) has just arrived in Budapest to begin his studies at the University of Economics. On his first day, he joins a group of young democratic opposition activists who organise protests against the ruling Communist regime. After Geri befriends activist leader Zsolt Száva (Márton Patkós), his life changes overnight as he throws himself into a world of girls, parties and heated political debates.

What Geri doesn’t tell his new friends is he is actually an informant for the State Security Department – and he doesn’t have a choice. If he wants to keep his seriously ill brother alive, he needs medication from the state, but it will come at a price. As Száva attempts to uncover the mole among his ranks, Geri desperately tries to hide his secret and keep his brother alive. But with time running out, he must choose which side he is on.

When he was developing the series, Szentgyörgyi found several aspects of his own life came together, from setting the story in a world he didn’t know and was fascinated by – he was born in 1992 – to his desire to show 1980s Eastern Europe in a more colourful and vibrant light. Having been raised on Hollywood movies, he also wanted to apply American screenwriting techniques to a story that was distinctly Eastern European.

“I thought that to write something that might be interesting even to a Western audience, I would have to mine stories of 20th century Central and Eastern Europe, where very often everyday people would get thrown into extraordinary situations,” he explains. “What if you’re on a train coming up to the capital to start your studies and then a person you don’t know shows you a badge and says, ‘From now on, if you want your brother to keep getting his medicine, you are going to have to become an informant’ – how interesting is that?”

“It’s very colourful in a way that maybe a preconception of 80s Hungary might not be,” says Curtis. “It’s also very accessible as a story. Geri has to spy on one of his mates, which is unusual, but he falls in love and goes on this crazy journey. It feels very accessible for everyone, not just students or people from that era.”

“It is a thriller and a relationship show. That’s what appealed to us,” adds Young. “There’s a group of young adults doing things for the first time but in an environment where the stakes are super high. It was really an exciting spin on a genre we’re familiar with. What we have is a compelling thriller story and very engaging relationship stories that resonate with each other, so it’s quite a game of 3D chess.”

Early in his writing phase, Szentgyörgyi would jot story ideas and script notes on his phone and then arrange these “puzzle pieces” into a basic outline. Bullet points featuring dialogue and elements of action would then be added to create early drafts of the script.

“Then comes the rock ‘n’ roll part where I start getting up very early [to write the script],” he says. “I’ve tried a lot of different things and this is what works for me. I wake up at 4.30am or 5am because I need the sense of it to be dark outside and to feel like the whole city is sleeping when I’m already up. That’s what inspires me. What I do then is turn the bullet points into dialogue, and that’s how the first draft emerges with the notes.

“What was also very good was it was always very collaborative. That meant I was so happy to get up in the morning to do it. Every single day, I could go into the office knowing my dream was coming into shape even more.”

Another key element of developing the series was finding a balance between retaining the authenticity of the era and ensuring modern audiences could relate to the story.

“Luckily, in the world we are living in right now, young adults really want change, so the series can resonate with them,” says Závorszky. She found Szentgyörgyi’s talent and energy “intoxicating” and paired him with a team of established crew members, including cinematographer Péter Szatmári (Kincsem – Bet on Revenge) and production designer Imola Láng (In Treatment), to bring his vision to the screen.

In pre-production, Szentgyörgyi and his fellow directors would discuss their individual episodes together to ensure the same style and tone ran through the entire series. They also worked together with HBO on locations, casting and music choices.

Then when it came to filming, there was a decision to be made about whether the shoot would begin in August 2020, heading into winter, or if the project should be delayed until March 2021, when better weather would come at the cost of a more demanding post-production schedule. Eventually, they chose the latter option, and working with three directors meant The Informant was able to move quickly through the edit.

“It was much better to be shooting into summer than into winter for a show that we wanted to be colourful,” Young says. “The sun shone during communism, let’s not forget that. It does have this summer vibe.”

The Informant was filmed on location in and around Budapest, while recreating the 1980s meant there were lots of discussions about costumes and hairstyles.

“Although there are a lot of episodes that are visually arresting because of the fantastic camera movements, the high stakes combined with beautiful images really complement each other,” Závorszky says. “As with all HBO series, it’s a very high-quality piece. We are very proud of it. We started shooting in March during Covid and it is a challenge creatively to pursue and finish the day with the result you dreamed of because there are so many things to think about.

“The other thing we need to mention is the music,” she continues. “When you make a piece about a certain era, you need to use some music that is dedicated to that era. In Hungary we had a few international songs but those were hits coming from England or the US. When we were trying to licence them, we could choose a cheaper one but the cheaper ones would not be familiar to the audience. We had to make choices.”

As HBO Max continues to roll out across Europe, Young says The Informant is an example of the streamer’s ambition to uncover great stories. “We’re looking for that feeling of opening a script, turning the pages and being captivated,” he says. “It’s as simple as that.”

As for Szentgyörgyi, seeing his series on screen makes it worth the pain of all those early-morning writing sessions. “What I’ve learned mostly is that it’s possible,” he says. “The more one works, the more luck one will have. Hard work works. Collaboration is the best thing in the world when you have good collaborators, and it’s magical when you start with an empty page on your laptop and you end with this. It’s worth it, even though at 4am it does feel like a sacrifice.”