A teacher and a pupil push each other to breaking point as tempers flare in Israeli drama Sh’at Efes (The Lesson). Writer Deakla Keydar, director Eitan Zur and actors Maya Landsmann and Doron Ben-David take DQ to school.

When a political discussion between a student and her teacher erupts into accusations of racism, it sets off an emotional conflict that spills out beyond the classroom walls.

In this fight over justice, 43-year-old teacher Amir and 17-year-old pupil Lian both prove to be as stubborn as each other, refusing to back down even when things spiral out of control and their argument leaves a devastating trail that will change their lives forever.

Across six episodes, Sh’at Efes (The Lesson) follows the ripple effect of this row from the classroom to the whole school, the wider community, the media and even today’s political reality in Israel.

Produced by Jasmine TV for Israel’s Kan 11 and distributed by Federation Entertainment, the series has provoked a range of reactions from viewers at home and abroad. Two episodes were screened in competition at French television festival Canneseries, where The Lesson had its international premiere earlier this year and subsequently won awards for Best Series and Best Performance for Maya Landsmann, who plays Lian.

“What surprised us was everyone was so touched and very involved,” creator and writer Deakla Keydar tells DQ. “It’s about people, and although people speak different languages, their feelings are quite international. People told me afterwards they couldn’t decide which side they were on.”

Landsmann adds: “People in Israel told me, ‘I hate you so much… but I love you.’”

Her character Lian is just one of a number of students settling into Amir’s civics class, but her solution to stopping harassment at the local swimming pool sparks a debate about racism that quickly boils over into personal recriminations as Amir challenges his students again and again. Afterwards, when both parties refuse to apologise, events spiral further out of control.

“What I liked most in the script were the relationships between the characters,” says Doron Ben-David, who plays Amir. “It was really important for me and really challenged me to play the main character because a lot of the time he gets into difficult situations.”

As for Lian, “she’s a monster!” exclaims Landsmann. “I identify with her in some ways because when I was in high school, I was like her. I stupidly thought I knew everything. In my real life, my opinions are so different [from Lian’s], so it was very interesting to act differently. It was also like a lesson for me in that you can have all these different opinions, not just one. I can understand this side and another side, and I can be this and this.”

“Being a teenager is about having strong opinions, and it doesn’t really matter what they’re about,” Keydar says. “That’s what makes us go very far with them without really understanding the meaning.”

Meanwhile, Amir has his own problems. “It’s my opinion that he acts from a lot of ego,” Ben-David says. “You could see from the scripts for the whole series that it always goes the same way. Once he thinks he’s right, he does something that makes everything else turn upside-down.”

Keydar describes Amir as an actor in his own class, while series director Eitan Zur notes that the two central characters have beliefs that stem from growing up as part of different generations.

“He has his own ideology. It’s not only to provoke,” Zur says of Amir. “The story brings up issues that were not issues 15 years ago because there were laws. You couldn’t say, ‘Arabs are not allowed at the pool.’ Nowadays in Israel, it’s something you can argue about. He’s from the old school and he says, ‘No, there is a law and morals.’”

As the creator of two characters who are perhaps more similar that they realise, “that’s a subject for my therapy,” Keydar jokes. “We are talking about two people who are so stubborn. I don’t know who invented them.”

While writing The Lesson, she says she would “freeze” if she ever thought too much about what the series has to say about modern Israeli society, “because then I immediately feel like I have to say something so smart. I just wanted to write a story and be very truthful and very honest.

“I was interested in people and what makes people do things. What kind of vulnerability makes you act this way when you’re hurt, and then how do you hurt the other side? That’s how conflict begins.”

Lian, she says, is not a political animal. “But Amir has his own blind spots. He has principles and morals in the right place but he can’t see his students as people.”

The story of The Lesson is rooted in a real incident that happened in 2014, when a 12th grade student criticised their civics teacher on Facebook. “I was curious about what happened underneath that and what would make me do that,” Keydar says. “Like Maya, I was a problematic student and I asked myself what would make me go all the way to get my teacher fired. For me, the answer was always a very personal thing they said. I would never care [enough] about a teacher if [like Lian] I only had two months until graduation. I would save my energy. I would be arguing with him to death but I would never go and post anything [online, as Lian later does].”

Keydar wrote the series by herself, but she gives her two “phenomenal” leading actors a lot of credit for bringing to life characters who are two sides of the same coin. “I had to put myself in the same scene as a male and a female, right wing and left wing, so we had to have a lot of conversations and creative dialogue,” she says. “I am also lucky to have Eitan as my director. He was very involved in my scripts and we also had a script editor, so they helped me to not go crazy.”

“Usually I don’t like to just get the script. I prefer to be as involved as possible,” Zur says. “What I tried to emphasise in the casting with these two amazing actors is it’s not only the way they act but something in their personality. You see that in the reactions Maya got – ‘I hate you and I love you.’ It comes from them, from their personalities. Between the three of us, including the script editor, it was a very good and tight process. From when I came in to the point when we were ready to shoot, it was only a few months.” 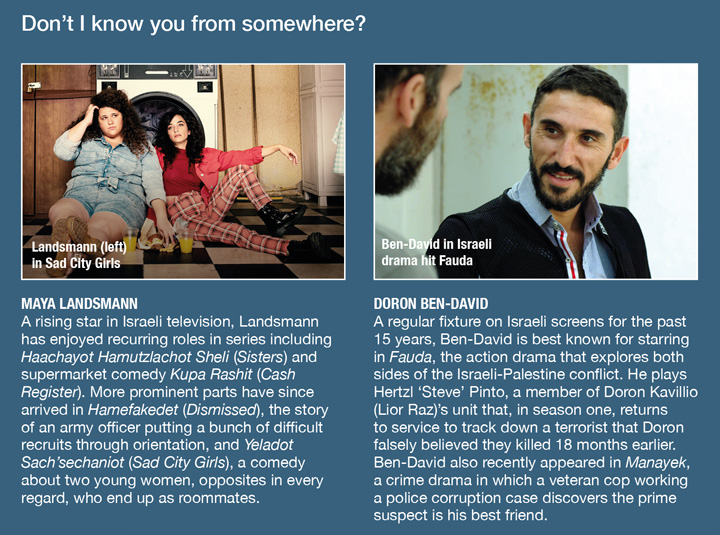 As is often the case with television projects, Keydar’s journey to getting The Lesson on screen was a long one that ended in a sprint to the finish. She first began working on the script five years ago, and “had many scripts that I threw away” before she met Zur.

“The most challenging thing for me as a writer was to find the right language, because my writing is more like prose than a script,” she says. “The story never really changed, so I came to Eitan with a very processed story but the language was not right. Eitan was marking a lot of text and said, ‘Deakla, it’s enough. You don’t project the script onto the TV.’”

Once a script is completed, Zur isn’t a director who likes to rehearse extensively with his actors. Instead, he will wait until he walks on set to figure out how he is going to shoot a scene. “Usually I’m not very planned; I prefer to see what is going on the set,” he says.

“I had the honour of being on the set, so I had many chances to watch how Eitan works with the actors,” Keydar says. “It was an amazing experience. He leads them through the scene, then he comes and corrects the places that are not right or don’t look natural or organic. It makes the actors bring so much of themselves because he trusts them. It’s an amazing process. On the first one or two days, I said, ‘Where is the directing?’ But it’s such a smart and creative way that gets everyone involved.”

Landsmann agrees, describing the confidence she had on set working in such a relaxed environment. “He trusted us,” she says of the director. “There was a lot of energy on set and, when we would finish a scene, he would put on a song and that’s when you know you’ve finished. It’s more than work. Deakla was also there, so it was like having mum and dad there. It was nice to see the relationship between them. I still remember the day we shot ‘the lesson.’ It was very tense. It was amazing.”

“We did four takes of 13 pages, each time with different camera angles, but we did the whole scene each time,” Ben-David adds. “When I came to the editing room, I said it looks like what we meant, but I didn’t know it was going to be like this. It was like a documentary. You could feel it was important. Even I felt it, and I was there.”

The actor says even the crew were fully immersed in the story they were all working on, while Keydar has already fielded questions about what happens next. “The director’s assistant told me to remember this,” she says, “because that never happens. Nobody on the crew ever wants to know what will happen next.”

“What happened on The Lesson, you cannot see it on every set in Israel,” Ben-David says. “It was very special. Eitan gave all the cast and crew time to be in the scene, even if it took 20 or 30 seconds.”

He also praises Keydar for writing the show’s dialogue in a way that was specific to each character. “In Israel and in a lot of series, everyone talks the same. The teacher talks

“As for Maya, it’s not enough to say she was good. She was very inspiring and authentic and she gave me a lot of space. Together we managed to get the words off the page.”