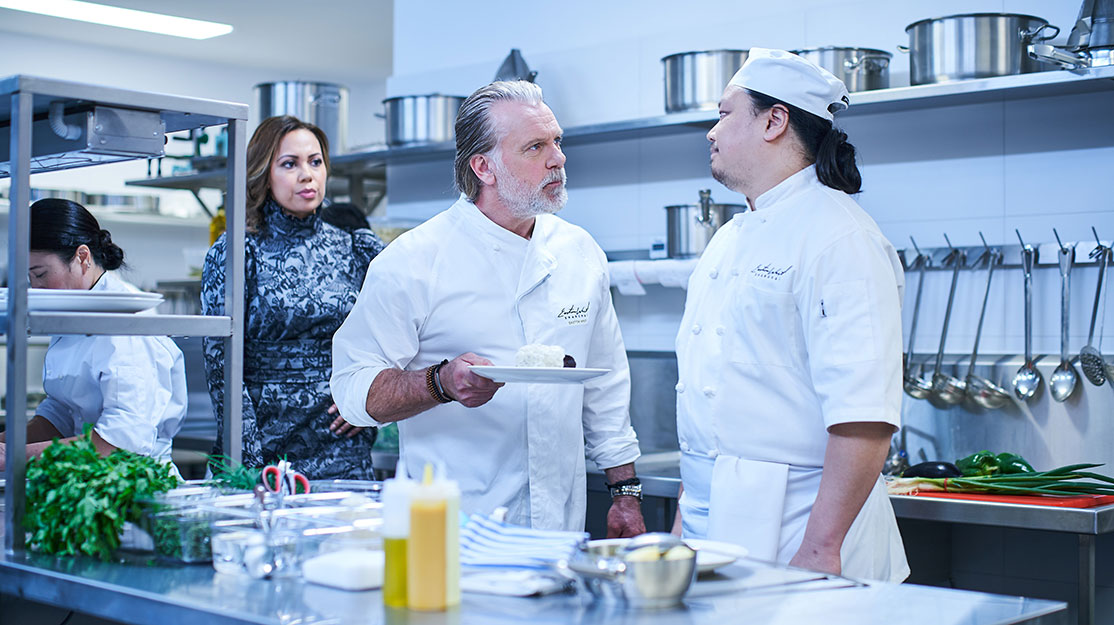 Aftertaste creators Julie De Fina and Matthew Bate reveal how the #MeToo movement shaped this story of a bad-tempered celebrity chef looking to rebuild his reputation with the help of his young niece.

While reality television has dished up numerous angry chefs over the years, Australian comedy-drama Aftertaste takes a skewer to the restaurant industry as one notorious cook gets his comeuppance in the #MeToo era.

The six-part series, which debuted earlier this month on ABC, stars Erik Thomson as Easton West, a volatile celebrity chef who burns his final bridge when he delivers a pig carcass to a critic’s lap and punches a restaurant owner’s son. The subsequent social media storm leaves him washed up in the Adelaide Hills, where he returns to the family he abandoned 25 years earlier and attempts to use his 18-year-old pastry chef niece Diana to crawl his way back to the top.

Series creators Julie De Fina and Matthew Bate didn’t set out to tell this exact story, but when the #MeToo movement overtook their development work, they knew they couldn’t ignore it.

“It is something we didn’t think would be as timely as it is,” De Fina tells DQ about the series. “We didn’t want to make a #MeToo show, but because we were dealing with someone who was a male of a certain status, who had this kind of power and existed in this kind of lawless land, we needed to say something about it.”

That was when they struck upon the idea of pairing Easton with his niece Diana, played by Natalie Abbott, who is equally outspoken but who also stands out as everything he is not – young, fresh and female.

“She wasn’t actually a part of it from the beginning, but she was the key that really unlocked it for us,” De Fina continues. “That made it about more than just this guy. It is about the new generation and, specifically, a young female who is now competing with him, and it’s not something he’s used to. From there, it also became about family because, inevitably, that was the family connection. It just took on more layers.”

Bate, from producer Closer Productions, describes the story as a transference of power from the old generation to the new, with Easton definitely left out of touch by his younger rivals.

“He’s very much an old-school chef who’s come up through the ranks of that kind of French hierarchy in kitchens, which is very brutal and almost army-like. I don’t think it quite exists anymore to that same extent,” Bate explains. “That’s what we were really playing with. I grew up in kitchens as well, and that’s what appealed to me when Julie brought us the outline. The world of food on television has become such a massive thing and we’ve watched so much food television that these characters have become so recognisable. It just felt so perfectly timed to skewer them.”

The foodie backdrop to the series was ever-present, however, with De Fina set on the idea of creating a dramatic kitchen comedy that could depict working in a kitchen as authentically as reality shows do.

“The food is a manifestation of both of the characters. He represents the old school, while she is about making really personal dishes, about her vagina and losing her virginity and all that sort of stuff, which he’s just so appalled by. But that is the manifestation of who they are and what they’re working towards creatively.”

Throughout development, the creators were in constant conversation about how far they could push Easton, and how much sympathy viewers should hold for him as he struggles to find his place in modern society.

“It’s an interesting one, because we don’t really want to redeem him. We don’t want to laugh with him when he’s being an arsehole,” De Fina notes. “That was really important. It’s hard to explain how redemptive he gets because we actively set out to not redeem him to a point where you want him to win. If anything, we were trying to push him into unlikeable territory, like really push him sometimes, but also trying to find a way where you kind of understand where he’s coming from so he’s not always just shouting for no reason.

“For example, when he yells at Diana for her ‘Losing my virginity’ dessert and talks about how he’s grown up in these kitchens, from his point of view, he has. He’s done the hard yards. His outbursts come from a place of truth, it’s not just from him being an arsehole. For us [as writers], it’s about finding those moments as well where perhaps you understand where he’s coming from. But giving him a [story] arc is even probably too generous because I don’t know that he has one. It’s a zigzag.”

In contrast, the creators want the audience to root for Diana as she stands up to her overbearing uncle. “She’s the real hero of the story,” Bate adds. “It’s a red herring in a way. It looks like it’s his show, but it’s really her perspective. It would be difficult to make it his in this day and age.”

De Fina jokes that the origins of Aftertaste feel like a Hollywood story. Her pitch document for the series was passed to Thomson, owing to the fact they share the same agent. Looking to step away from his “family guy” image, the Packed to the Rafters and 800 Words star called the writer to ask for the first option on the project. Unusually, they then went straight to broadcaster ABC to pitch the show, rather than finding a production partner. But De Fina had worked with the network before and found the commissioner was keen on the project, particularly with Easton following the same route Malcolm in the Middle star Bryan Cranston took when he accepted the lead role in Breaking Bad.

ABC put the series in development, with the show’s setting shifting to Thomson’s base in South Australia. That’s when De Fina took Aftertaste to Bate and Adelaide-based Closer Productions, finding the partner that would help her bring the series to the screen. Distributed by ABC Commercial, Aftertaste is among the series being screened as part of Berlinale Series Market Selects at this year’s virtual edition of the German film festival, which takes place next month.

The development process was greatly assisted by Thomson, who as well as starring in the series is also an executive producer. “He’s very generous; he is not egotistical in any way and he is very experienced,” Bate says. “He’s been doing it for years and years so he knows the game. It was great to have him in there, bringing his ideas of who this character could be. He came at it with a really open mind and it just evolved very naturally.”

In fact, as the series’ focus shifted from Easton to Diana, De Fina and Bate had to tell Thomson it wasn’t his show any more. “He understood where it was coming from and actually saw the benefit in that show,” De Fina recalls. “He also wasn’t in the writers room the whole time because he wanted us to go away and do our thing. But when he was there, it was just really insightful because it’s not coming from a writer’s point of view, it’s coming from an actor’s point of view. Seeing things from a different perspective allows us to then do the same thing with other characters.”

In a writers room that included story producer Matt Vesely, Jodie Molloy and producer Rebecca Summerton, De Fina and Bate broke down the entire story, compiling outlines and treatments before they began writing the scripts. Their focus then was to ensure the series didn’t lean too heavily into comedy.

“I do love a good gag show, but what we were interested in was the drama and the backstories of these characters,” Bate explains. “There’s a deep story behind Easton’s genesis and the skeletons of the family and all of that. The comedy comes out of characters and then we push them into a room together and have them joust it out. We tried to use the most colourful swear words we could find. Diana comes from this background of sweary types and she certainly takes it to a more creative level.”

“In this, it’s the power dynamics as well,” De Fina says. “It’s in seeing someone like Easton having to relinquish his power and someone like Diana become empowered. That’s where a lot of the comedy comes from. It’s definitely not a sitcom comedy.”

The pandemic delayed production by two months last year, but the show was among the first out of the blocks once filming was allowed to resume down under. Filming presented some challenges unique to a drama about cooking, with Thomson having to take knife skill classes under some of the chefs advising on the series, while body doubles were also used. Outdoor kitchens were also set up on location in Kangarilla, 40 miles from Adelaide, to prepare the hot food that would be served to characters on camera. Duncan Welgemoed, the chef behind Adelaide’s Africola restaurant, was a consultant on the show.

“Then we had to create a vagina dessert that’s part of the story,” Bate reveals. “We came up with this idea in the [writers] room, but what does it look like when you actually come to make it? It’s got to look like a vagina, but it’s also got to look culinary.

“We spent a lot of money and a lot of time working with chocolatiers, and when we got the cost report back, there was a ridiculous amount of money we spent just on vagina cakes. I was like, ‘Oh my God, we spent thousands of dollars on that.’ I think it’s worth it.”