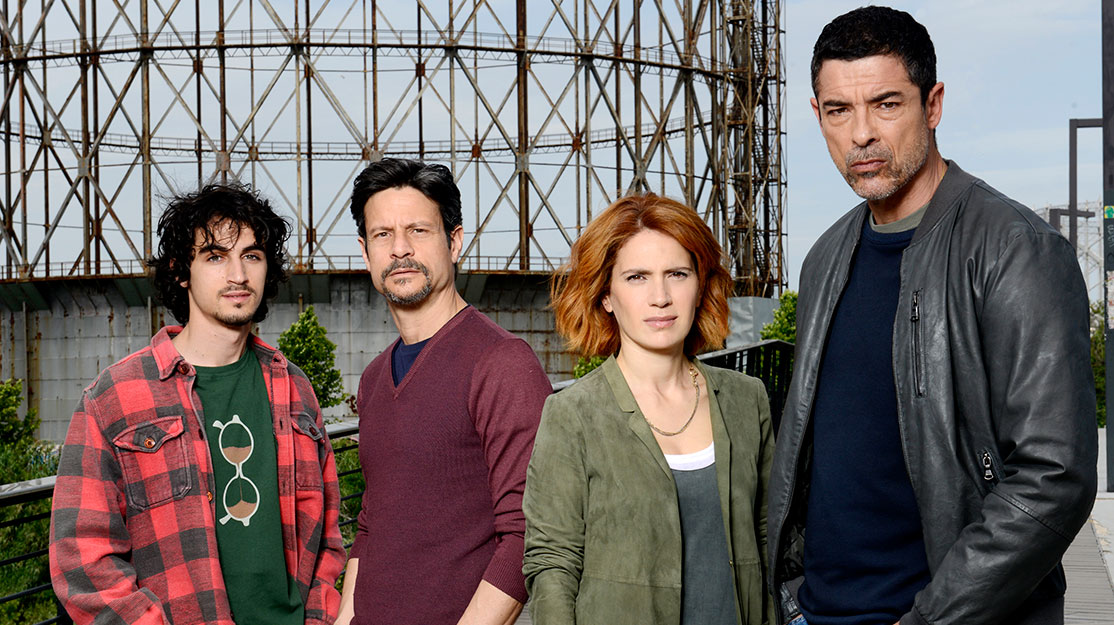 The eight-part drama tells the story of Valerio (Alessandro Gassmann), a grieving father who takes it upon himself to uncover the truth behind his estranged son Ettore’s supposed suicide. Along the way, he must overcome several obstacles blocking his path to justice while also coming to terms with his troubled past, both as a man and a father.

Directed by Gianluca Maria Tavarelli (The Young Montalbano, Maltese), the series comes from creators Leonardo Fasoli and Maddalena Ravagli. It is produced by Publispei and distributed by ZDF Enterprises. Earlier this month, it was selected for the Berlinale Market Screenings programme during the Berlin International Film Festival.

Here, Fasoli, Ravagli and producer Verdiana Bixio, CEO of Publispei, tell DQ about how the series pushes the boundaries of traditional crime drama and bringing a different side of Rome to the screen.

Who is Valerio and how do we follow him through the series?
Fasoli and Ravagli: Valerio is a man who has never connected with his inner self, a vulnerable man locked in the armour of a warrior. It was this vulnerability, disguised as strength, that did not allow him to find a way to get close to his son. Ettore’s death places him at a crossroads: to either succumb to the greatest pain a human being can experience, or to find a way to survive.
The practical reason that allows Valerio to remain standing – trying to find out who and what is really behind the death of his son – hides an even deeper one: to understand who his son really was and who he had become. Thanks to his investigation, Valerio is gradually reborn. He is no longer afraid of being vulnerable and, in his new way of seeing the world, he has taken up Ettore’s gaze of the world.

How does he begin to investigate his son’s death and what ghosts must he confront from his past?
Fasoli and Ravagli: This is a private investigation, carried out by an ordinary citizen who has a past as a difficult cop and was kicked out by the police for his illegal behaviour. His ghosts relate to this difficult past and the dynamics of his family, a family of policemen, and how they reacted to his expulsion from the force.

What can you tell us about how Valerio’s journey unfolds with help from Sara (Maya Sansa) – the deputy commissioner and his ex?
Fasoli and Ravagli: In seeking the truth about what happened to his son, Valerio comes to terms with all his ghosts. Among them are his past as a policeman, the accusation of corruption that fell upon him and his relationship with his father and brother, who are also policemen.
Then there is his private past – the relationship with his first wife, the relationship with his son as a child and also the betrayal and the affair he had while he was married and his son was a child. This affair was with Sara, who never stopped loving him and who now helps him in his investigation. She discovers herself too, thanks to what emerges from the investigation: that in life you need to be brave and regrets are thorns that remain inside us.

What are the origins of the series?
Bixio: Standing Tall is an extremely moving story; I believed in it from the very beginning. It all started with an original idea by Leonardo, Maddalena, Monica Rametta and Massimo Bavastro, highly talented writers who know how to combine powerful feelings and innovation within the crime genre. Along with Rai Fiction, we worked a lot on the content, the scripts and the creation of this product, which excited and involved us immediately.

How does the series push the boundaries of traditional crime dramas?
Bixio: The distinctive feature of this series lies in the strength of the feelings and emotions it conveys to the viewer. An alleged murder is investigated but, above all, it is the story of Valerio, a man who has a painful past, who saw the bond with his family and his wife break. He has lost his job as a policeman but he lost his son long before his death. Valerio experiences a painful rebirth to find himself and to find a bond that not even death can break.

Leonardo and Maddalena, you have written for some of the biggest Italian series in recent years, from Gomorrah to Maltese and ZeroZeroZero. How does Standing Tall compare to these, or was it a very different challenge for you?
Fasoli and Ravagli: This was a private and emotional story. In every story, we look for a key element that we are familiar with, and that always relates to interpersonal relationships within the family. At the centre of this show is the relationship between fathers and their sons.

Tell us about your writing process together.
Fasoli and Ravagli: We always start from two distinct processes, with which we move forward in parallel. The first is research. We collect information from journalists, judicial sources – such as pre-trial detention orders – interviews with social workers… If [we’re writing about something historical] and primary sources are no longer available, we might look for diaries from those at the time, for example. As we acquire this information, we also focus on the characters and their relationships, bearing in mind the fact that, in our opinion, a powerful story is a universal story, regardless of the specific place or time in which it takes place.
As both Euripides and Shakespeare teach us, archetypal family relationships have a problematic and somehow unsolvable core that is always recognisable. We believe this is what has always been the hook to stories and that’s what we try to investigate.

Does the series have a particular visual style and how was this achieved with director Gianluca Maria Tavarelli?
Bixio: We had a strong story and we needed an equally strong director, capable of giving shape to the story. Gianluca Tavarelli joined the team early on. He worked on the scripts enthusiastically and was able to direct this series masterfully, with sensitivity and professionalism. I loved his way of directing because he was able to make us feel the frustration, pain and emotion of this story and its protagonists. But I cannot forget all the talented professionals who make the difference in a series, such as musician Ralf Hildenbutel and director of photography Marco Pieroni.

What kind of Rome do we see in the story and what was your experience filming there?
Bixio: Standing Tall is a series of the streets, in a nocturnal, almost dirty Rome, which is unusual for Italian television. [We wanted authenticity in every element] – language, costumes, locations, sets. The series shows a cross-section of a Rome with a beating heart, suburban, far from the bourgeois neighbourhoods. It depicts an authentic city – a very real dimension in which Valerio searches for the truth.

What challenges did you face in development or production?
Bixio: We had very specific technical and logistical needs and we wanted to be respectful of the scripts. We spent 17 weeks shooting in Rome, Viterbo, Anzio and the Pontine coast, in more than 150 locations. These included places that have rarely been seen on screen or that are difficult to access, such as the quarries in Tivoli.

How is Italian drama changing as series become more watched by audiences around the world?
Fasoli and Ravagli: The arrival of new broadcasters and platforms in all countries has led to a general raising of the production bar from all points of view. This has eliminated the old distinction between cinema and series, almost reversing the relationships, and series are increasingly being seen as a new hotbed of experimentation. In addition, as well as being home to the three largest organised crime groups in the world, Italy has an extremely rich history and and offers a lot of storytelling material.

What are you working on next? What plans do you have for a second season?
Bixio: We are working on a new story with Maddalena and Leonardo. Our collaboration has been so good and this is so rare and precious that I want to continue to share projects with them. I admire them very much. They know it.