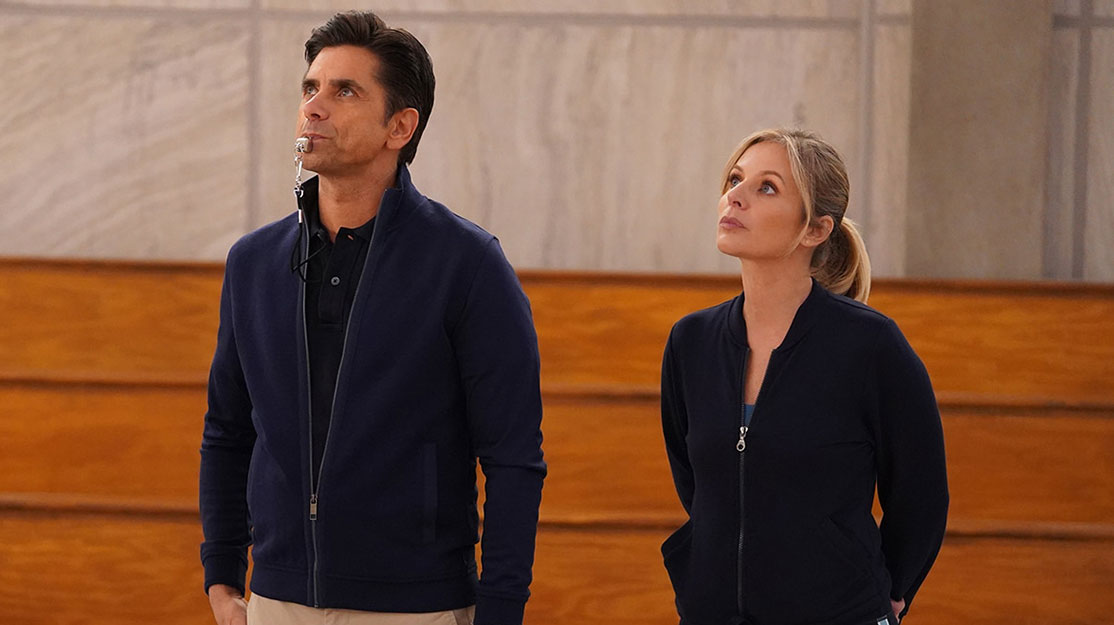 Over the last year, television productions have stopped and restarted as they negotiate filming amid the pandemic. Disney+ series Big Shot, which debuts on the streaming platform tomorrow, has been hit harder than most, with statewide shutdowns across California affecting filming in LA and positive test results on set then necessitating three separate pauses.

But Jessalyn Gilsig, who stars in the high-school sports dramedy opposite John Stamos, is just thankful to have had a degree of normality in her life that being able go to work provided.

“It took us over a year to shoot 10 episodes, which is obviously not normal. But we did manage to complete them,” Gilsig tells DQ. “It’s complicated because it’s a basketball show, it’s a high-school show, so the entire premise of the show is hallways, kids and contact with the basketball team. We had to be really creative about how we would continue to build that world under these new protocols.”

Crew members wore PPE, in addition to maintaining social distancing and regular hand-washing, while actors replaced their masks after every take. When basketball scenes were being shot, testing took place daily as opposed to three times a week.

“Then, from a creative standpoint, we did have a couple of episodes where we justified there not being any extras,” Gilsig says. “For dramatic reasons, the gym wasn’t available, or there were different creative ways to reduce the number of people who were going to be in an enclosed space at any time. As artists, sometimes when you’re given a limited palette, you come up with things you wouldn’t have found otherwise. We couldn’t lean on the basketball to the degree that we would expect to with a sports show, and they found a way to make that work to our advantage. That’s your job as an artist – to figure out what’s available to you and to create something from it.”

Big Shot stars Stamos (Full House) as Marvyn Korn, a men’s basketball coach who is dumped from his college job and given a chance for redemption with a coaching position at an elite private all-girls high school. A fish out of water in his new surroundings, he soon learns the teenage players require empathy and vulnerability – foreign concepts to the stoic coach.

Gilsig plays Holly Barrett, a teacher and the team’s assistant coach, who is initially excited about the arrival of Coach Korn and feels the team will be able to learn from his experience. But his presence also makes her question why she might have been overlooked for promotion, leading her to reflect on her life choices.

“The natural evolution would be that she would be promoted, so it brings up some really interesting conversations,” Gilsig says. “A scene I loved shooting was with Yvette Nicole Brown [as no-nonsense dean Sherilyn Thomas], where it’s sobering to realise Holly wasn’t being taken seriously, no matter how much work she had put in.

“Sometimes when somebody comes in from the outside, you end up reflecting on your own life and the choices you’ve made, because this is a guy who’s very comfortable asking for what she feels she deserves. It’s interesting and funny, and playing his assistant is hilarious. We have a really cool banter and dynamic. Then there’s a little journey for Holly as well that I really enjoyed.”

The series was ordered in October 2019, but Gilsig only joined the show in January last year following a late casting switch. That meant she had to play catch up in terms of her preparation, while her introduction to Stamos happened when she filmed the scene in which Holly meets Coach Korn for the first time.

When an actor joins a series late in pre-production, “it’s all about problem solving and committing to your decisions in the moment as quickly as possible,” Gilsig says. “As an actor, you can sit at home and you can come up with a million ideas. But once you get to the set, you really have to abandon them because you are trying to figure out how this conversation exists between two people and, therefore, you have to be completely open to their contribution as well.

“All the planning in the world sometimes doesn’t actually determine how the scene is going to play. I’ve learnt that if you’re present and you’re listening and you have your lines, you should be able to navigate your way through the scene and figure out what that dynamic is between the two characters, which you can’t decide in isolation. It has to be in collaboration.”

Stamos, she says, is a very dynamic actor who is incredibly invested in the role he is playing. And because of his background in sitcoms, he is comfortable improvising or changing his approach to a scene for each take.

“He doesn’t get attached to any blocking or any line reading or anything like that. It all has to come from the truth of the moment,” Gilsig says. “Not all actors are like that. Some actors are very prepared, they’re very controlled and they have a very specific delivery, and that can be effective. But he’s extremely dynamic, so it was fun as myself and as Holly to try to play catch up to a guy like that who’s always on the move and always thinking, always pivoting and always reacting.

“I worked years ago on [American football drama] Friday Night Lights and I remember on the first day of filming I showed up in Austin and I was supposed to enter the coach and his wife’s house for the first time. I said to the director, ‘Well, I haven’t been inside yet. Should I go inside and check it out?’ He said, ‘No, you haven’t been inside yet. Let’s shoot it.’ You learn as an actor that you can’t prepare for everything. A lot of it is listening and reacting. John’s the perfect partner to be that way because he’s just so present and open.”

As for whether Holly and Marvyn become closer than professional colleagues through the series, Gilsig isn’t giving anything away. “They develop a really deep friendship and we see them outside of school. They spend time together outside of school and, you know, it’s TV. So you’ll see!”

Big Shot is the latest sports dramedy to land on Disney+, following the recent rollout of The Mighty Ducks: Game Changers, a spin-off from the popular film franchise about a young ice hockey team. The platform is also home to family-orientated series such as High School Musical: The Musical: The Series, and Gilsig believes parents can feel comfortable tuning into Big Shot with their children.

“Because it’s Disney+, it’s really safe. You know as a family you can watch it and kids can watch it,” she notes. “But what was so exciting for me is the sports angle. My daughter’s really into sports and she’s really into soccer. Culturally, we focus a lot on men’s performance in sports. But in reality, sports is a big part of girls’ lives. It’s not really something that is explored and discussed and appreciated, and the talent and the commitment and the hard work that our daughters put into their sport – I’m just so thrilled it’s going to be highlighted.

“We explore what it means to be on a team, what it means to be pushed, to push yourself, what it feels like to fail, and these are all themes we’ve seen in sports movies. We know so much about male athletes, but I’m hoping this will really highlight the idea that women and girls are participating in sports at a very high level, whether or not they’ve been given the same amount of focus.”

It’s a dream scenario for Gilsig, a huge sports fan who played basketball in high school. “I love sports the way I love live theatre,” she says. “I was really happy in that environment and I loved pushing the girls. I love the subject matter. It’s very personal to me. I’m still really athletic. It’s just something I really care about, and I don’t think it’s something we appreciate is a big part of women’s lives. But it’s nice we’re shining a light on it.”

Big Shot comes from Dean Lorey, Brad Garrett and David E Kelley, the latter being the creator of series such as Big Little Lies, The Undoing and Ally McBeal. The show marks a reunion for Kelley and Gilsig, who credits the writer with changing her life after she was cast in his school-set drama Boston Public.

“Everything is character-driven; he draws very distinct characters,” she says of Kelley. “You get to the point on his shows where you take any combination of people and put them in a room and you would get something because everybody is so clearly drawn. What that gives you is endless possibilities.

“As an actor, you have a lot of confidence working on a show that he’s behind because you know there’s a standard for a character that’s very high. You don’t actually have to generate that much on your own because it’s in there. It’s in the script. It’s in the words. And if you play the truth of that, you’re going to get something interesting.”

Gilsig then went on to take roles in hit series such as Friday Night Lights, Nip/Tuck, Heroes, Glee, Vikings and Scandal, and admits she was surprised at the success musical comedy Glee enjoyed over its six award-winning seasons.

“We were shooting the pilot of Glee and I remember thinking, ‘I like it, but I don’t know if there’s a big audience for this.’ And then it turns out to be this phenomenon,” she says. “And then on Vikings, I got to work with Gabriel Byrne and that was like a master class. You get thrust into a scene with Gabriel Byrne and you think, ‘OK, I’m going to learn everything that I can in the presence of this person because this is gold.’ He was so generous, one of the most generous actors I have ever worked with.

“Every show is a learning experience. The other thing that’s really fun is you learn about yourself. Vikings is a really good example of where I played a very ambitious woman [Siggy Haraldson], and I don’t know if I was ever as confidence as my character in life. But when you get to exercise those muscles every day, you develop as a person, which is such a nice byproduct of the work.”

At a time when many families are still stuck at home as the pandemic continues, Gilsig believes Big Shot can be a show that draws viewers together around the world – and can continue for as long as Disney desires.

“There are a lot of possibilities and directions that we can go in with the world that we’ve created and the people that are assembled,” she says. “I’ll go as long as they want to. When you find a happy set with great actors, we try to move in. As Jane Lynch [who played cheerleading coach Sue Sylvester] did on Glee, you bring a kettle to your trailer and say, ‘I’ll be here if you need me.’”