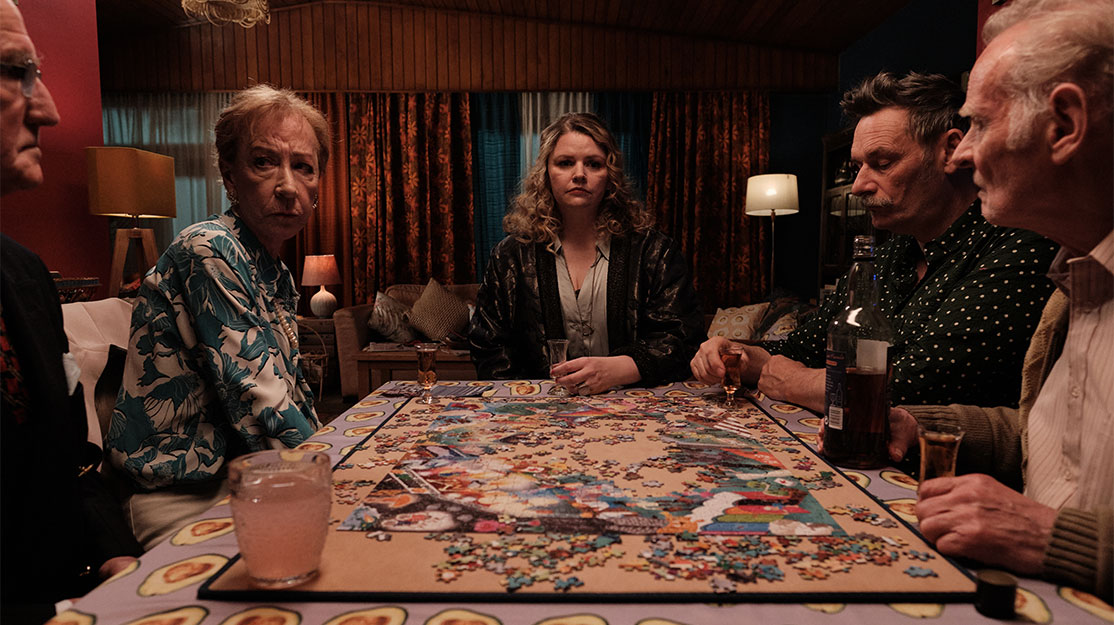 Sister execs Alice Tyler and Lydia Hampson take DQ inside the Chernobyl and Landscapers producer’s development process and preview upcoming BBC conman series The Following Events Are Based on a Pack of Lies.

The first original series from writing duo and siblings Penelope Skinner (Fresh Meat) and Ginny Skinner, five-part drama The Following Events Are Based on a Pack of Lies, promises to be a dark, funny and unpredictable thriller about a trio of characters tangled in a web of falsehoods and half-truths.

A fresh and subversive take on the confidence trick story, the BBC series introduces bestselling fantasy author and widow Cheryl Harker (played by Marianne Jean-Baptiste) and single mother and underestimated PA Alice Newman (Rebekah Stanton), who come together to take down Dr Rob Chance (Alistair Petrie), an eccentric and celebrated ecopreneur (allegedly) who catches the two women in a string of dupes, deceptions and delusions.

Due to air in 2023, the series comes from producer Sister, which has built an enviable slate of ambitious and award-winning shows such as Giri/Haji, Landscapers, Chernobyl and This is Going to Hurt. Other upcoming shows on its slate include Netflix’s darkly comedic Greek mythology drama Kaos, ITVX’s Passenger and The Split writer Abi Morgan’s latest series, 1980s New York-set thriller Eric, which is also for Netflix.

Among the US- and UK-based producers’ team are executive producer Lydia Hampson and director of development Alice Tyler, who attended French television festival Série Series earlier this year to present The Following Events are Based on a Pack of Lies. They then spoke to DQ about the creative process behind Sister’s projects, finding new talent behind the screen and the secret to television development success.

Is there a common theme or thread between Sister projects?
Lydia Hampson: We’re always looking for that element of freshness. Often that will be a tonal blend or genre blend, but also it’s because we are so creator-, writer- and filmmaker-driven. For us, it’s about working with people – those voices that feel really exciting and unique – and helping them realise their passion projects that might be from the weirdest little corner of their mind but is the thing they care about the most.

Alice Tyler: They feel authored – that’s the common thing. They need to feel like they couldn’t be written by anyone else. That’s probably the point of similarity.

Do you find broadcasters are receptive to quirky, original ideas?
Hampson: It’s a mixture. As long as the storytelling feels bold and risky and unusual and exciting in a way that feels inclusive, that’s appealing to a broadcaster, rather than just making a passion project that’s just for my passion. Everyone’s willing to take a risk as long as the risk is one that everyone can come with them on.

Tyler: I’m aware of how lucky we are to have had such support from British broadcasters. If you think about Landscapers on Sky and Pack of Lies on BBC One, both of those are incredibly different. We were immediately championed by the teams there and jumped upon. In both of those shows, for example, they go to the heart of the weirdness of these really deep emotional stories that are actually hugely relatable and grounded in completely real ordinary people. But that appetite for the difference and risk within them felt ripe at both Sky and the BBC when we took them there. In both cases they have championed those shows all the way through.

How do you find new writers?
Hampson: It’s often about growing a relationship as much as anything else. It’s hard to approach a writer cold with an idea and say, ‘Do you want to write this?’ Even if you’re just a fan of them and you have a coffee, that’s a starting point to go, ‘What else do you like?’ and then start working together. Sometimes it’s something we could never and would never have thought of that they have come to us and say, ‘I’ve always wondered about this.’

Where are the opportunities or challenges in the television industry at the moment?
Hampson: One of the challenges is where there used to be established training grounds for crew, particularly creative crew – script editors, directors, producers – to train on continuing shows like Holby City and similar shows. Those opportunities are fewer now and I feel like there’s so much banded as ‘high-end television’ in terms of budget that where you bring on newer talent to those shows, it’s harder because you don’t get given the safety net of an established show. There’s no shortcuts to having that experience, so I sometimes think we, as an industry, are doing it a disservice by the way we expect very new people to come and perform at a high level. And when they don’t, we judge them really harshly for that. It’s not really anything to do with the lack of talent, we just haven’t established training grounds. Infrastructure has changed, just because there’s so much now that’s immediately ‘high-end.’

Shooting took place this summer on BBC series The Following Events are Based on a Pack of Lies. How did you come to work with series creators – and siblings – Penelope Skinner and Ginny Skinner?
Tyler: It came about a few years ago now, through a desire to work with Penny and Ginny and a love of their work, spearheaded by [Sister’s joint creative director of scripted] Naomi de Pear. We grew that relationship and they brought the idea to us. It was a real passion project for them. It was one of these amazing things that come to you. They hadn’t written a script, they’d written a series outline pitch, but it was so fully formed and the seeds of our show were completely there. The key characters are completely the same [in the series] and the level of detail and uniqueness in the world-building of the show, which is a very key characteristic, was all there, as was this passion to flip the traditional con story.

They were passionate about exposing the impact of that kind of behaviour on the victim and on telling the victim’s story, but telling it in an optimistic, victims-fight-back way, and in the process exposing the warped and dark psychology that exists at the heart of conning, which really is the psychology that pervades everything else. All other forms of abuses of power are in it. You can start with conning and trace it all the way up to fake news and sexual abuse. The whole thing is based around the same principles and hunger for power over others and the same narcissism. They have just done this amazing, obsessive deep dive into that psychology. It just felt like such a clear and fresh take on the genre that we just went for it.

Is there a secret to successful television development?
Tyler: One of the things I’ve learned is how different each writer and each project is. That fluidity and flexibility is on our part too, working and collaborating with them in a way that brings out their best work. It’s a huge skill in the job, rather than imposing a particular way of working, and that comes hand in hand with creative fluidity as well and being really open and creating a safe space where you can find the right thing, but maybe go down five wrong paths to get there.

Hampson: Sometimes time is great because you can use it to your benefit, and sometimes you have too much of it. There’s not one single element that’s a good thing. It’s a constant moving beast, the whole process. It’s very complicated.

Hampson: Because I work on so many different things, one of the things I learned very keenly is that you have to adapt – and often it is about trust, and support as well. Writing is one of the most anxiety-inducing things. It can very lonely and so exposing. For most people, whatever they’re writing, there’s something deeply personal in it for them and it’s our job to support and nourish them through that process.

What is the most common note you give to writers?
Hampson: The only common note is to be brave, don’t be afraid. When you’re in development, that’s where you can be totally brave because you’re not yet hampered by actor availability or locations. When you’re in development, you can be like, ‘Yes, we’ll set it all underwater, fine.’ I feel like ‘just try it.’ If it doesn’t work, we rejig it. But getting those first thoughts down on paper feels like a way to find the goal. The thing you’re too afraid to say or write down, find that bit.

Tyler: It’s about being true to yourself as well and what you want to say, and having that anchor driving you and returning to it.

Hampson: It’s not necessarily that we’re looking for the deep and meaningful. But that sense of purpose will help drive a writer through the process and the conception of it and will anchor the entertainment and twists and turns into something that really matters for them. If you can recentre around what it means to you and what it’s about, then I find a lot of invention and a lot of inspiration comes from that.