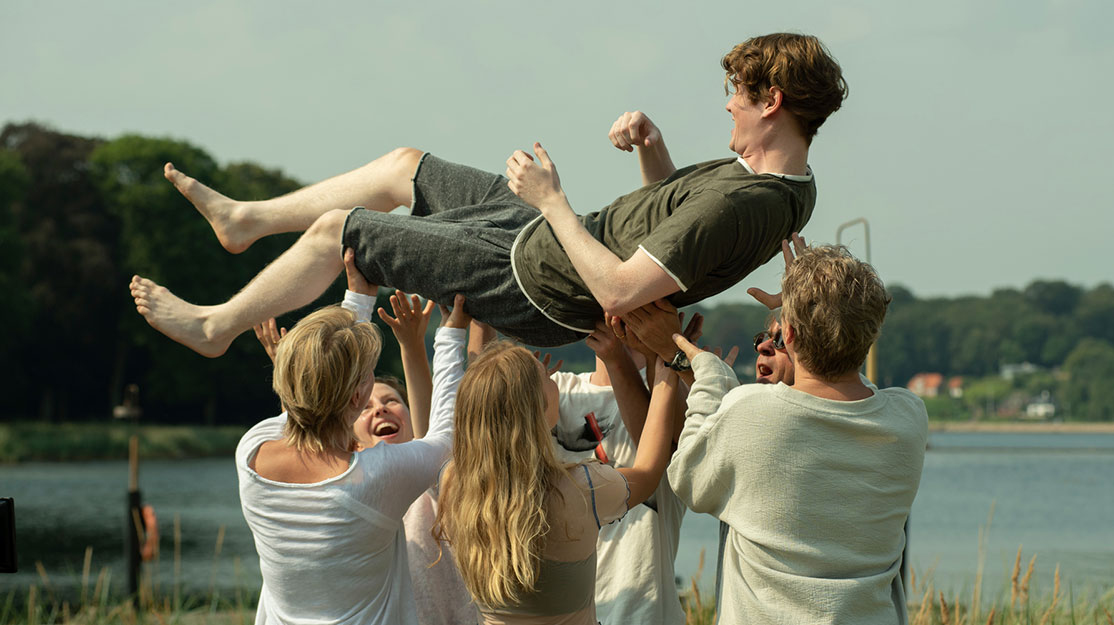 DQ speaks to writer-director Friedemann Fromm and star Milena Tscharntke about German thriller Tod von Freunden (Beneath the Surface), in which the lives of two families are torn apart after a tragic accident.

Boasting a German and Danish cast, multiple narratives and a remote island setting, eight-part thriller Beneath the Surface is a story of secrets and lies that threaten to unravel the lives of two families following an accident.

Living on an island paradise, these families – one German, one Danish – have forged a life together, their children living like siblings in a carefree environment. But when a sailing trip goes wrong and one child disappears overboard, skeletons from the past come to the fore, leading to distrust, doubt and the break-up of this previously idyllic life.

Uniquely, each episode follows events before and after the accident from a different character’s point of view, throwing viewers deeper into the mystery at the heart of the story as the truth is slowly revealed.

“It’s the story of two families who are merged into one big clan and living a dream on a marvellous island,” Fromm explains. “But the paradise is threatened by the truth after a tragic accident where one of the kids vanishes in the open sea. They are searching for the truth, denying responsibility, fighting against guilt, fighting for relief and fighting for each other. It’s the story of eight people, eight ways of dealing with loss, hope, love and the monsters of the past. Each perspective reveals more and more of what really happened on this tragic night in the open sea.”

German actor Milena Tscharntke plays Cecile, the daughter of Danish couple Charlie (Christensen) and Jakob (Lindhardt) and sister of Emile (Oskar Belton). Having grown up on the island, Cecile has become close to Kjell (Lukas Zumbrock), who lives with his parents Bernd (Liefers) and Sabine (Schütter) and brother Karl (Anton Petzold). But when Kjell disappears while aboard a yacht with Cecile’s family, their cosseted life on the island begins to crack.

“She’s very tough and cool and grew up on this island with the three boys,” Tscharntke says about her character. “She’s into skating and dancing. As she gets older, she falls in love with Kjell, one of the boys from the German family. But then she finds out this huge family secret, which changes her whole perspective on life. Then Kjell, her love, goes missing. And from that point on, her whole world is upside down and she goes into this self-destructive mode, gets into drugs and she’s just really lost. She goes through a lot throughout the series.”

Produced by Letterbox Filmproduktion (Bad Banks) for German broadcaster ZDF, Beneath the Surface is inspired by Fromm’s own fears as a parent and as a keen sailor who often takes trips on the water with his children.

“Suddenly, the feeling struck me – we are so lucky. We all count upon the fact that everything goes right and we come back every day when we are out,” he explains. “And then I thought about this magical ‘what if?’ I was so threatened by this idea of ‘what if’ that didn’t want to think about it. Then I thought, ‘OK, I have to write a story about it.’ The next point was how close are my friends and I? How much do we really know each other? Are there mysteries? How big is the trust? So from one point came another.”

With the series balancing both German and Danish perspectives, Fromm centred on a unique structure that follows events before and after the accident from a different perspective in each of the eight episodes. Each character must deal with their role in what happens and its aftermath as they all struggle towards their own goals.

“Bernd, the father of Kjell, wants to find the truth no matter the cost,” Fromm says. “Sabine, the mother of Kjell, wants to find peace, which brings up more trouble. The kids have to deal with it also. Cecile’s character goes into a deep depression; she’s rescued by her brother, who really risks his life for her. And Karl, the brother of Kjell, he’s autistic and he sticks to his belief that his brother will come back because everything that gets lost comes back. Everybody gets a different storyline and every episode reveals a little bit more about what’s really going on.”

“For me, it was very interesting because it’s so complex and complicated and you really want to get to the end, because with every character you find out more and you get a little bit further into what really happened,” adds Tscharntke. “That’s very exciting and thrilling. With Cecile, she was so interesting to me because she gets pulled in so many directions emotionally, with her father and the truth, her twin brother, her love and loss. It was very interesting to get into every relationship and explore it a little bit.”

Fromm first pitched the story to Michael Lehmann, CEO of the Studio Hamburg Production Group and a producer at Letterbox, before taking it to ZDF. Then began a long process of development, writing and rewriting before Dynamic Television then joined as the global distribution partner. Danish public broadcaster DR then came on board after pre-buying the series.

“In the middle of the development process, we were all a little bit astonished at how big this show gets, because we started with, ‘Oh, it’s a small family show.’ And then during the process it became, ‘Wow, it’s a huge story,’” Fromm remembers. “This was a challenge for everybody because it’s also then about money issues, of course. The whole production was pretty complicated. It was the most challenging show I have ever done.”

As writer-director, Fromm says he makes a clear distinction between the two parts of the job to ensure he is able to change the script on set if a scene isn’t working the way he had hoped.

“If I hang on to the author’s feelings, it might become complicated. I try to separate the functions, but, especially on this show, it was a really big advantage to know the script so well,” he says, noting the different perspectives in each episode and how events are replayed from opposing vantage points. “With my assistant, we made a timeline of the show, as it was crucial for everybody to know in each episode, ‘OK, I’m here. I have a reference point here.’ So in those terms, it was a big advantage of writing and directing together.”

Shot in 2019, filming on the picturesque Okseøer (the Ox Islands) off the coast of Denmark, close to the German border, proved challenging for cast and crew because construction workers were standing by ready to begin redevelopment work, imposing tight time pressures on shooting the island scenes. Scenes aboard the yacht and the accident itself were filmed in Greece to ensure the actors weren’t dealing with freezing water temperatures, while there was also a huge amount of work to complete in preproduction, as the series features sailing, underwater shots, kayaking, dancing and multiple languages.

“We had a huge amount of preparation to do,” Fromm says. “Milena and the other German actors learned Danish. The Danish actors learned German. Jan Josef, Oskar and Lukas learned kayak polo and Milena had to do a big dancing performance, so it was a lot of work.”

“We managed it so well because in the first week of shooting, we were on this beautiful island and I feel like we really grew together,” says Tscharntke. “We had beautiful weather the first week and then it started to rain. It got cold and windy. We had dancing scenes, we had so many emotional scenes and then we got onto the boat. But the first week really helped us get through this. And Cecile was just so interesting. I’ve never played a character who had so much anger in them and it was just so, so interesting to get into every direction.”

With the drama featuring as part of C21 Screenings’ Digital Premieres today ahead of the ZDF launch on February 7, Fromm promises a “big emotional rollercoaster” as the story plays out. “It’s the perfect world [at the start] and it’s threatened by a dark mystery,” he says. “The core of the paradise is dark, and this darkness shines through paradise more and more.”

“The series is about very universal topics like family, love, loss, lies and the truth,” adds Tscharntke. “Everyone can connect to it. It’s just really thrilling because you want to find out what happens.”