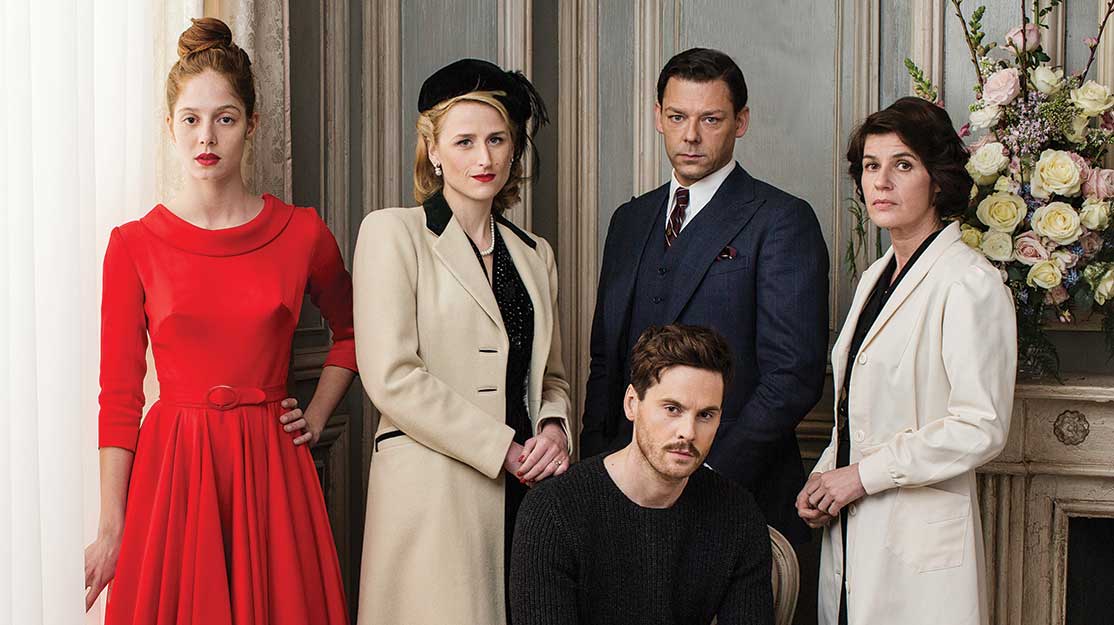 The Collection: style and substance come together in new drama

Post-war fashion drama The Collection is setting up shop at Amazon and France 3. DQ hears from the creative team about their designs for this UK-France coproduction.

Period drama will dress up in high-end fashion for a new series set in post-war Paris in the aftermath of the Occupation. The Collection follows two brothers who run a haute couture business in the French capital in 1947, with storylines exposing internal rivalries, betrayals and the grit and treachery behind the glamour.

The cast is headed by Richard Coyle and Tom Riley as brothers Paul and Claude Sabine, with Frances de la Tour as their mother Yvette, Mamie Gummer as Paul’s American wife Helen and Jenna Thiam, who plays Nina, the working-class daughter of the chief seamstress who becomes the iconic face of the fashion label.

But behind the scenes, the show could also become a template for the way international coproductions are made in the future.

Showrunner Oliver Goldstick (Ugly Betty) says The Collection was born when he visited a museum exhibition about the golden age of couture during a trip to London.

“It was delicious and visually arresting on so many levels but I also knew there was something more to uncover,” he explains. “So I set out to write a story about a fictitious fashion house. I particularly imagined a saga about a family that’s bound not only by blood. Some of them are linked by sheer trauma from the war and all are bonded by their passion for couture and national pride. It occurred to me this was not a show so much about fashion but about transformation and reinvention and revival.”

Goldstick says post-war Paris was chosen specifically as the show’s setting as he was fascinated by the impact and aftermath of the Second World War on the city.

“It’s a crucible of a lot of potential drama. Our show centres upon a thorny relationship between two brothers – one who undresses women with his eyes and the other who dresses them in something much better.

Lookout Point CEO Simon Vaughan says he was keen to attack a big period drama with a very modern voice. “It’s fast-paced, witty and it’s got an edge to it,” he says of The Collection. “The marriage of that and big period drama felt fresh and interesting. And the idea of something set in Paris, shot in English but for a global audience just felt like the kind of thing Lookout Point would be good at putting together.”

Bringing to the project her experience on series including Versailles, Borgia and Camelot is exec producer Anne Thomopoulos, who also oversaw shows such as Rome and Generation Kill when she was an executive at HBO.

“I love period drama, and the post-war period is really interesting to me, having worked on Band of Brothers, so the aftermath – being able to do something from a ground’s eye view of the common man in Paris in post-war – is fascinating,” she says. “Fashion also has a tendency to be perceived as very frivolous. People have tried multiple times to develop and produce fashion projects and that frivolity always seems to come through. Oliver and Kate really found a way to tell the story where there’s a human face to everything and there’s an overlay of fashion.”

If there were any fears that The Collection would put style before story, Croft insists that the fashion setting is only ever a vehicle through which to tell “human stories.”

“We have this wonderful crucible of drama with the family,” she says. “Then you get that incredible layering in the very particular detail of how the costumes are put together, how that couture was made, how that atelier is put together. So hopefully there’s joy in those moments of detail, but it’s not just about the button being sewn on.”

Behind the camera, the series has been put together with as much precision as a Dior dress. Building on Goldstick and Croft’s vision, Lookout Point partnered with French production company Federation Entertainment to produce the series, which has been picked up by Amazon and France 3. It will be coproduced by France Télévisions production arm MFP.

For Vaughan, The Collection represents an increasingly common way of bringing series to air – rather than winning a broadcaster commission, the show is greenlit by the studio before channels, in this case Amazon and France 3, licence it. He describes the partnership as a tapestry between a global SVoD player, a distributor and broadcaster. “Instead of thinking SVoD is taking the show off the table, we’re asking what rights does Amazon need and working out on a country-by-country level how we maximise the value of the show so broadcasters and other platforms can co-exist with Amazon.

Following in the footsteps of series such as The Tunnel and The Last Panthers (both for Sky Atlantic and Canal+), The Collection is part of a new wave of “miracle” UK-France coproductions, says Federation founder Pascal Breton: “The Collection is even more of a miracle because it’s British producers bringing to the world a French topic. It’s good for the industry in France, of course. It’s really exciting because we are learning together to build this new model of international coproductions. It’s not easy, but it’s really great when we manage it.”

Amazon UK film and TV strategy director Chris Bird says he was drawn to The Collection by the quality of the writing and the ambition behind the project: “It’s a prestigious, dramatic, glamorous television show and when it was first presented to us, it was very clear that Simon could have made this show with anybody, any major broadcaster in the UK or around the world, and that if we wanted to participate we had to move quickly.

“We were able to create a new structure for our involvement that allowed us to come on board at a very early stage. We have tremendously high hopes for it. It’s going to be big. Everything from the costume design – the couture – to the set design and cinematography is going to be of an extremely high standard and, from our customers’ perspective, it’s another example of very high-quality drama we’ll be bringing them this year.”

Filming for The Collection began at the end of January 2016, with Parisian streets created on an expansive studio backlot in Wales to complement exteriors filmed on location.

“We’re doing a very ambitious studio build to create our atelier, both downstairs and up, because that doesn’t exist,” says Croft. “The vision from Dearbhla and Alison was very specific so we thought we had to create that world. Practically, that affords us all sorts of advantages.

“One of the great strengths of working with Oliver is he’s used to working in that studio system way with a big backlot and studio build, and with an enormous amount of research. We’re all used to seeing that period in black and white photographs, but when you find the colour images, it’s incredibly vivid and lush. It’s really exciting because we’ve all seen a lot of dramas set during the Second World War and the 1950s, but that post-war period hasn’t been tackled in this way. It’s a feast for the eyes.”

Vaughan adds: “Dearbhla as a director has exquisite taste, judgement and craft. She turns down nine out of 10 things she gets offered and is extremely picky. If you look at her body of work – Esio Trot, Penny Dreadful, The Tudors – she’s the controlling force from a vision standpoint alongside Oliver and the team. And it feels like everything fits together in a very modern way.”