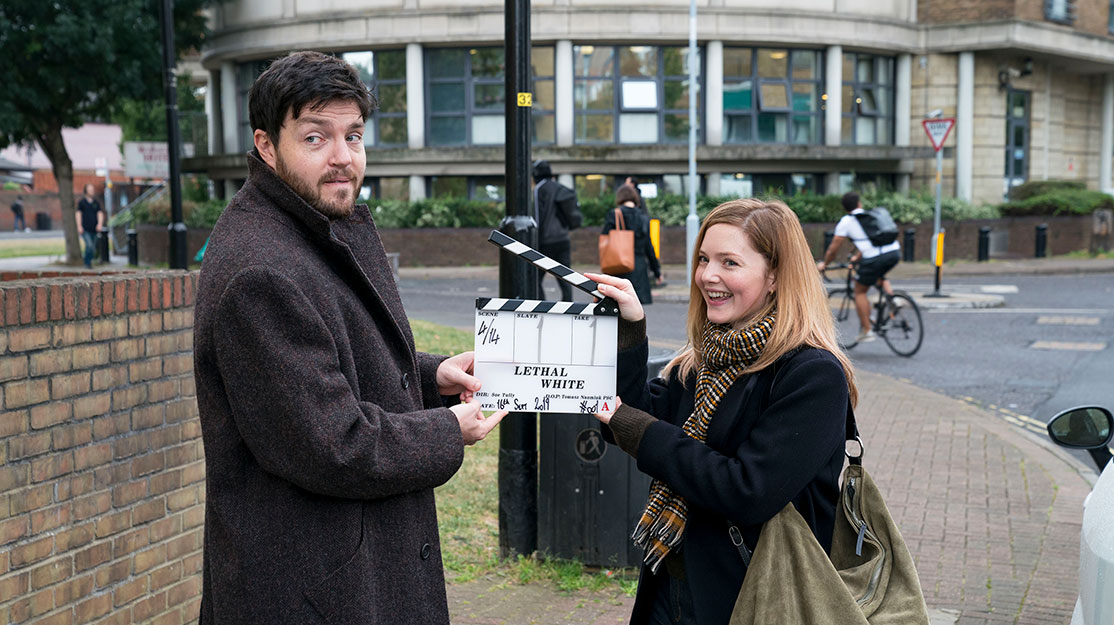 Filming the TV adaptations of JK Rowling’s Cormoran Strike detective novels – written under the pen name Robert Galbraith – poses more of a challenge than cop dramas that are anchored in a particular location. On Strike, there are precious few permanent sets.

“It’s not a precinct series – it really is driven by the story in each novel,” explains producer Jackie Larkin. “The only thing that remains sacrosanct is Strike and his coat, to have some continuity.”

The fourth novel in the series, Lethal White, is about to hit BBC1 as a four-parter starting this Sunday. Adaptations of the first three novels, shown in autumn 2017 and early 2018, were filmed together, but this new story reunites cast and crew after two years. Tom Burke and Holliday Grainger, who play war veteran turned private eye Strike and his assistant Robin Ellacott, respectively, return for the longest instalment yet.

They’re investigating the claim of a disturbed young man who says he once saw a young girl strangled and buried near his home. Meanwhile, they are pulled into another case in which Conservative Party minister Jasper Chiswell (Robert Glenister) is being blackmailed by two men and hires Strike to dig up dirt on them as ammunition.

The show sets out its lavish stall from the off, with the opening scene a continuation of the grand wedding of Robin to her long-term boyfriend, Matthew Cunliffe (Kerr Logan), which ended the previous entry, Career of Evil. Picking up an hour or so later, we’re now at their opulent wedding reception, at which Strike performs a mea culpa: he rehires Robin after having fired her for misconduct in their last case.

Luckily, Rowling had warned producers that the wedding would span both novels. “We’d had a nod from Jo that, with the new book, there was likely to be a wedding reception so we needed to preserve bits of it,” explains Larkin. “We had kept Robin’s wedding dress and kept in touch with some of the key supporting artists who were prominent.”

Cast and crew decamped to Rushton Hall in Northamptonshire, England, for a week, where the actors were put up and the wedding reception was filmed over three days. “It’s always cold and uncomfortable to wear a wedding dress for that long, especially at 2am,” reports Grainger. “We probably shot the first dance like 70 times or something, but I love being on location and there’s nothing more beautiful than a wedding set.”

Other locations were trickier to film in than a rural hotel. Denmark Street in central London – the exterior location of Strike’s office above a guitar shop – changes each time they return to film, owing to ongoing gentrification and the construction of Crossrail, the latest addition to the London transport network.

“The street opposite Strike’s office is now covered in scaffolding,” explains Larkin. “It’s such an iconic location that it’s always a buzz to film there, but it’s a challenge. We always film on a Sunday because it’s quieter, but you still get people coming to the music stores. And we’re allowed to stop the London buses for three minutes while we shoot. The bus drivers are always cooperative.” The interior of Strike’s office and his pokey flat are built at West London Studios in Hayes.

Director Sue Tully says her biggest challenge was recreating the House of Commons for scenes in which Robin goes undercover as an intern for Chiswell.

“You can’t film in Westminster, and because the place is undergoing renovations at the moment, it’s also a real problem shooting outside – with Big Ben covered [the clock tower has been undergoing renovations since 2017], it would immediately date the series, so I had to be careful with shooting angles,” she explains. “The interiors stretch out over four different locations. That was a fun challenge.” London’s Guildhall, Charterhouse School, Rushton Hall Hotel and Harrow School were knitted together to form Parliament.

This may seem like going to absurd lengths, but Larkin says it was absolutely necessary. “The House of Commons is iconic and people are familiar with it and it is important viewers feel they’re in the right place,” she notes. “All of us went on a tour of the House of Commons just to make sure our rendition of it was authentic.”

Tully is Strike’s first female director, having established herself on dramas including Line of Duty season five and The Musketeers, which starred Burke.

“I was a fan of the Strike books,” says Tully, who started her career as an actress on Grange Hill and EastEnders. “I’d read the book and seen the other adaptations and absolutely jumped at the chance. It was a no-brainer. I was coming at it from a fan’s point of view.”

Having Rowling as an executive producer on the series – production company Brontë Film and Television was founded in 2013 to create TV projects adapted from her novels – is always a help to the crew, explains Tom Edge, who has adapted the latter three novels for the screen.

“Where there are tough challenges to be made and pieces of invention to be done, we have someone on board who knows the material better than anyone,” he says of Rowling’s involvement. “Jo’s also very generous about those things and very welcoming of invention, especially where she sees that the intention is to bring out her characters’ inner lights, which on the page she spends a lot of time on and we have to find ways to dramatise that. Overall, she’s a real pleasure to collaborate with and very generous.”

Rowling occasionally visits the set and turned up for the wedding reception shoot because it’s such a pivotal moment in the story. “She wanted to see the scene on the steps where Strike and Robin hug because there’s that moment of, ‘Will they, won’t they?’” Larkin recalls. “It’s such a pivotal scene that it appears in flashbacks for both of them and makes Robin ring him from her honeymoon. It’s the closest they’ll come for another book or so and it’s important to get it right.”

The unresolved romantic tension between Strike and Robin is at the heart of the drama. Having watched the pair grow increasingly close, Burke says viewers will find their chemistry even more irresistible in Lethal White, which will air in the US and Canada on Cinemax.

“I had a sense, emotionally, of Strike being one layer of skin thinner in this one,” he says. “There’s this beat, this moment that happens near the beginning, which the book frequently returns to. It’s at Robin and Matthew’s wedding. Robin and Strike don’t quite know what’s happened, only that something has happened, and both of them carry that throughout the four episodes. They’re a little awkward with each other at times, not quite knowing how to get back to where they were before.”

It looks as if fans will continue to be tormented that the pair still don’t see themselves as an item. “Even I want to know if Strike and Robin get together!” Grainger laughs.

Over a series that takes them to destinations far and wide – even to Mauritius for Robin’s honeymoon – Strike and Robin will continue unravelling mysteries and journeying towards the truth, if not (yet) towards each other.