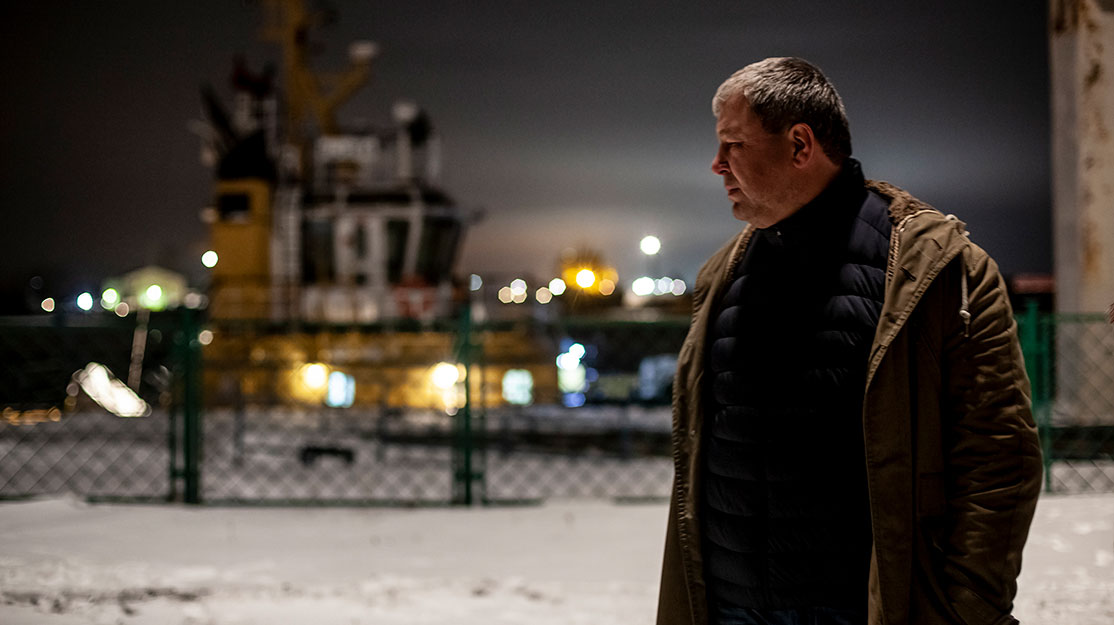 Russian drama Storm follows a policeman who faces a desperate choice if he wants to save the woman he loves. Producer/distributor Yellow, Black and White’s Irina Sosnovaya and Daria Bondarenko introduce the series.

Russian drama Storm details follows a policeman’s descent into criminality and the detective on his trail.

Launching later this fall on Russian streaming platform Start.ru, the series is produced by Start Studio, part of Yellow, Black and White Group (YBW), which has exclusive distribution rights

Here, YBW’s creative producer Irina Sosnovaya and Daria Bondarenko, executive VP of international development, distribution and coproductions, tell DQ about developing the series, the writing process and the emergence of Russian drama on the international stage.

What is the series about?
Irina Sosnovaya: The story begins at a small seaside town festival. A prominent businessman who has his sights on the mayor’s office opens a children’s arts and sports palace. The roof of the building collapses under the weight of the snow, and the palace turns into a mass grave. It looks like the businessman is going to get away with it until Detective Sergey Gradov (Aleksandr Robak) from the police anti-corruption unit deems it a matter of honour to put the man responsible for children’s deaths behind bars.
When Gradov is just a step away from achieving his goal, his wife Marina (Anna Mikhalkova) falls gravely ill, with her only hope of survival being a liver transplant and expensive specialist treatment overseas. To save the woman he loves, Gradov will have to let the main suspect go and resort to extortion, bribery and evidence-tampering to raise the money he needs.
The criminal decides to get rid of Gradov because he knows too much. But Gradov’s razor-sharp mind and talent for scheming make him incredibly elusive. To save his life and fight his enemy, he starts killing people and getting rid of the evidence. But his friend Mikhail Osokin (Maksim Lagashkin), who works in homicide, begins to suspect Gradov could be behind the chain of murders. Although he has no hard evidence, it becomes a matter of honour for Osokin to expose Gradov’s crimes.

How was it developed with the broadcaster?
Daria Bondarenko: The director, Boris Khlebnikov (Arrhythmia, An Ordinary Woman), is well known in Russia for his nuanced and realistic social dramas that capture Russian realities and present an in-depth analysis of interpersonal relationships. Many of them have been distinguished and recognised internationally.
Another exciting thing about the series is that it is a mostly character-driven story in which we see a man just like any other making a choice – and crashing down. When we discovered this story, we realised that only an online platform would be able to handle this sort of frank portrayal of Russian realities.
Sosnovaya: Storm has many layers to it, which can attract critics and spark discussions. Government against business, civil servants against military, journalists against activists – these are some of the conflicts it covers.
It also has a lot to say about human relationships. One of the investigators has a fiancée who teaches psychology at a university. He wants to marry her and have kids. Another one has a wife, but he is not happy with her and tries to convince her to try an open relationship. A businessman, who feels that he owns his town, has a wife and a kid who remembers his father’s every misstep. Both the hero and antihero want to see a continuation of themselves in their children, so their conflict is, in a way, a battle for Russia’s future.

How would you describe the show’s tone?
Sosnovaya: We realised it would be challenging to pick the right tone for a story about corruption and police in contemporary Russia. But we feel that these series are not primarily about the police or the investigative committee, but about people and the choices they make.
The story emphasises the protagonists’ lack of moral compass, which is what makes it interesting. The characters are complex people who find themselves in challenging circumstances. This story is not rooted in a particular setting or town. It’s more about human nature in general.
Bondarenko: The complexity of the story comes from the complexity of its characters. There are no straight heroes or villains, so we think the audience will be more interested in following the more realistic plot development.

What was the writing process like?
Sosnovaya: It is a wholly original story that Natalia Meschaninova, a writer/director, came up with. The goal we set ourselves with this story was to make a genre series that would thrill and entertain within the social context that is characteristic of contemporary Russia and any other country.
Boris Khlebnikov, the series director, was also a big part of creating the story. As producers, we tried to give as much creative freedom to the talented crew as we could, not forcing them to stay within the boundaries of the genre but encouraging them to write the social drama we would be excited to follow.

Where was it filmed and how would you describe the visual style?
Bondarenko: We picked Kronshtadt, a beautiful seaside city that stands on a Kotlin Island, one hour away from St Petersburg.
Sosnovaya: The series is stylised after 1970s American movies like William Friedkin’s French Connection, but with a modern twist

How are drama series evolving in the region?
Sosnovaya: Since the rise of online streaming services that produce original content, the industry has been booming. Content creators are no longer bound by the restrictions of the major TV channels and they are starting to create bold genre and high-concept projects.
The Russian online audience is more informed and pickier. The world has globalised, and the series that are popular abroad are also popular in Russia. Chernobyl was an event; many people have said it should have been shot in Russia if the industry were more developed. We are trying to help the industry get there, to bring it to the international level.
Digital-only projects are gradually becoming the industry’s leading events – shows like Gold Diggers directed by Konstantin Bogomolov and An Ordinary Woman by Khlebnikov. We are seeing how, little by little, the world’s majors are gaining interest in Russian projects that are getting recognised by the international audience.

What kinds of stories are audiences interested in?
Sosnovaya: The audience loves watching itself. It’s the effect of recognition. We like imagining ourselves in every story we hear or see; we enjoy experiencing someone else’s life.
As a production company, we seek stories that combine high concept with familiar characters and relationship models. We can’t have simple black-and-white characters – it won’t keep the audience’s interest for long. We need complex ones. This would allow us to do projects that not only have high production values but tell the story in a more detailed, engaging way, allowing for more in-depth look on the characters.

What are you working on next?
Sosnovaya: Our next project is called A Good Man, a story about a killer that is based on real events that have shaken the entire country. A man who slaughtered 82 women and managed to get away from the police for 20 years turned out to be a decent-looking person who everyone around deemed ‘a good man,’ and, most shockingly, he was a policeman.
After his wife cheated on him, he got disappointed in women and decided to become a ‘judge,’ meeting females and brutally murdering those he deemed unworthy, letting go only those who passed his test.
As we were preparing for the project, our scriptwriter and I went to interview the subject of our story in prison. Four hours into it, we discovered his real motivations, which we used as the foundation for our script. Konstantin Bogomolov, who directed Gold Diggers for us, will be directing this series as well.
Bondarenko: We believe this story can appeal to viewers outside Russia. The audience’s interest in high-concept stories rooted in real-life events is continually growing. What could be more potent than a story of a maniac who is trying to ‘catch’ himself as a policeman? And it’s not just a story, it’s something that really happened.