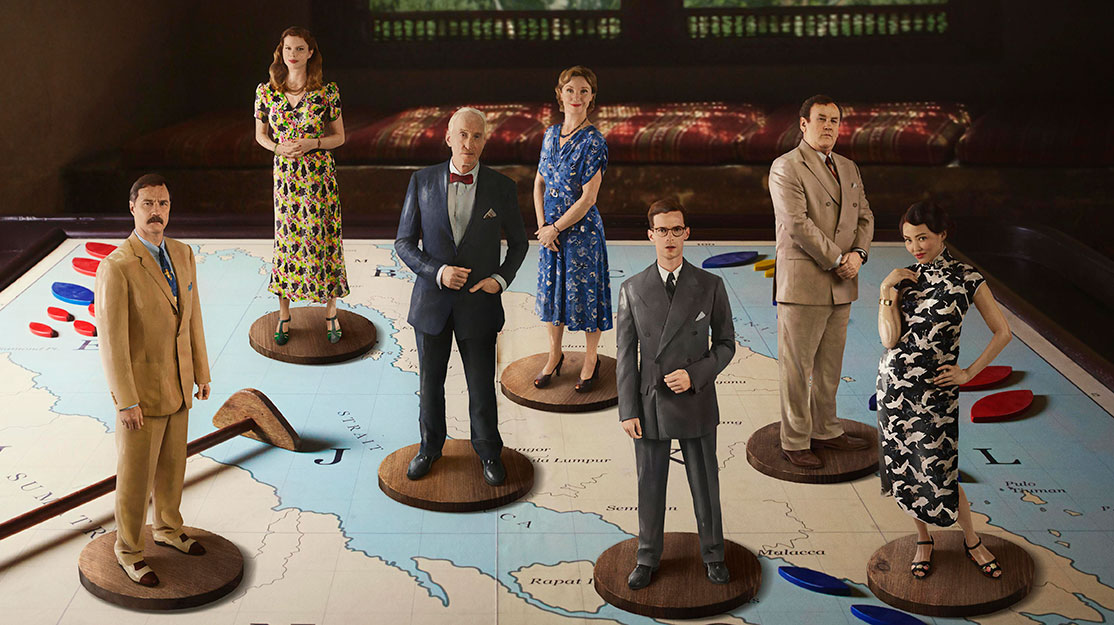 The cast and crew of lavish period drama The Singapore Grip welcome DQ to Malaysia, where the weather serves up a taste of events to come in this adaptation of JG Farrell’s novel.

For those who like a great big metaphor front and centre on their TV screens, there is an absolute gem in the first episode of ITV’s stylish new drama series The Singapore Grip. A posh birthday party at a mansion owned by a very rich British ex-pat living in Singapore in 1942 is about to be rudely interrupted by the mother of all storms. The wonderfully named Sammy and his Rhythmic Rascals, who have been holding sway with their enthusiastic trumpeting, will shortly be drowned out by rain and thunder.

It’s a metaphor showing how the gilded, untroubled lives of the Brits in early 1940s Singapore suddenly took a violent and stormy turn when the Japanese invaded. But does it have a parallel in the production itself?

Well, yes and no. Work on the six-part drama, which stars David Morrissey, Jane Horrocks, Luke Treadaway and former Coronation Street star Elizabeth Tan, was affected by storms during filming in Malaysia in the middle of last year. They forced the rapid and efficient removal of all things electrical from the set as soon as one threatened to break.

The vivid displays of thunder and lightning did not herald impending disaster, but such an ambitious production did have its challenges. Based on the book by JG Farrell and adapted for the screen by Oscar winner Sir Christopher Hampton (Dangerous Liaisons), the depiction of full-scale war, for example, was always going to be tricky.

“We had to film the Battle of Slim River, a key conflict as the Japanese invaded Malaysia and Singapore in 1942, and we kept punting it down the schedule as we worked out precisely how to do it,” director Tom Vaughan says of making the show, which tells the story of a British family, the Blacketts, living in Singapore at the time of the Japanese invasion. “It was logistically challenging and we ended up filming it during the last days of the shoot.”

Vaughan pulled out all the stops to make the battle scenes look realistic. A Japanese tank, a 95 Ha-Go, was built from scratch by production designer Rob Hughes and his team, while various authentic instruments of war including anti-aircraft guns and 25-pounder guns were sourced from museums and collections across South-East Asia. A ghost town – it was supposed to be the site of a new airport in Malaysia but was never used for that purpose – provided a location for the Japanese attack on Singapore’s docks, where buildings could be set alight and blown up.

Regrettably, an awful lot of that type of thing took place in Singapore and Malaysia in 1942, a great deal of it aimed at the Brits. At the time, UK prime minister Winston Churchill described the invasion of Malaysia and the subsequent capture of the crown colony of Singapore as the worst disaster in British military history.

Hampton says: “It was, I would suggest, the first of three irreparable British disasters, the others being the Suez crisis in 1956 and Brexit.”

The blushes of those responsible for what Hampton calls a “debacle” are not spared in The Singapore Grip, a title that refers to both the control of Singapore, first by the British then by the Japanese, and a service on offer in the island’s red-light district.

While all the civilian characters, such as the ultra-rich Blacketts and the many people who exist within their orbit, are fictional, a lot of the military characters – including Sir Robert Brooke-Popham, commander in chief of British forces in the Far East in the run-up to the Japanese invasion – are real and, frankly, don’t emerge with any great distinction.

“You do have to walk a fine line between making fun of people and treating them with respect, but the truth is a great many very costly mistakes were made back then and a misplaced feeling of inherent British superiority existed,” Hampton says. “Such a feeling was part of the reason the British were so ill-prepared for the Japanese attack.”

Nobody embodies that sense of superiority quite like Walter Blackett (Morrissey), a rubber baron always on the lookout for ways to make more money. With the health of his business partner Webb (Charles Dance) failing, he must secure the future of the business, and decides Webb’s son Matthew (Treadaway) is the perfect match for his spoiled daughter Joan (Georgia Blizzard). But his idealism leaves Walter increasingly suspicious as Matthew falls for mysterious Chinese refugee Vera Chang (Tan).

“There is something about Walter that is in the DNA of a certain class of British man,” Morrissey says of his character. “His life is about order, entitlement. It’s about being a white man – a rich white man.”

The Britannia star is not averse to a little order himself. Each time he takes on a role, he finds a music playlist to match. So what was he listening to on his iPod before he shot scenes as Blackett?

“Lots of classical, lots of swing and artists like Glen Miller and English jazz from that period as well,” he reveals. “They got me in the mood – you certainly don’t want The Rolling Stones or T-Rex in your head before you shoot a scene in a drama like The Singapore Grip.”

Love songs didn’t feature on his playlist, although we see Walter and wife Sylvia (Horrocks) in bed together. But their relationship, at least on camera, is strictly platonic. “I suspect Sylvia probably suffers from migraines,” says Horrocks, a long-time friend of Morrissey, the pair having attended drama school together. “‘I’ve got a bit of a headache, darling’ is probably what she would be saying to Walter.”

Other relationships are more tactile. The handsome Matthew has two women vying for his attention: Joan is hell-bent on seducing him, but he seems more drawn to the enigmatic Vera.

“It’s all very sexy,” says Tan, best known for playing Coronation Street’s Xin Proctor, the soap’s first regular Chinese character, “and being sexy is an important part of who Vera is. Part of my audition for the part involved me doing a self-tape that included a couple of scenes that were both saucy and funny with Matthew.”

Produced by Mammoth Screen (World on Fire, Poldark) and distributed by ITV Studios Global Entertainment, all six episodes will be available on streamer BritBox following the first episode’s debut on the ITV linear channel this Sunday. Following the opening scene of The Singapore Grip, which shows Matthew searching for the love of his life amid the chaos of the Japanese invasion, viewers will be keen to find out precisely who she is – a fact that remains a secret until later in the series.

“I describe the series to people as a love story, one that is set against the backdrop of the Japanese invasion of Singapore and the end of colonialism, and that opening scene sums that up,” producer Farah Abushwesha says. “We want The Singapore Grip to be epic, and it has that epic feel to it. But we’re also just telling human stories about boy meeting girl, and what happens when boy meets girl.”