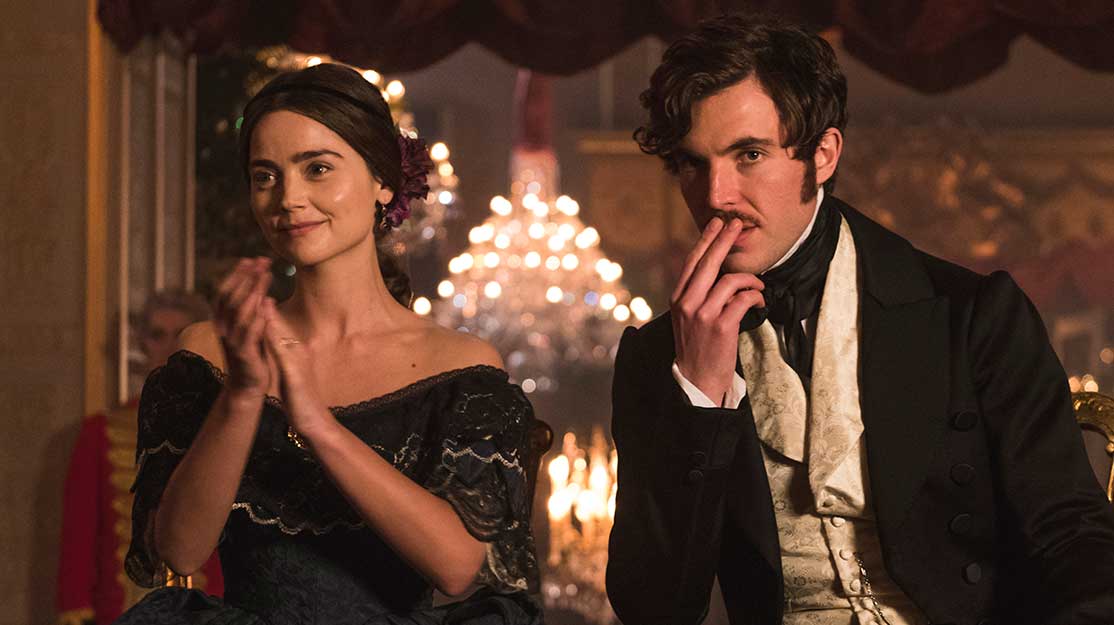 Nigel Lindsay and Catherine Flemming reveal the secrets of ITV period drama Victoria as the series, starring Jenna Coleman as the British monarch, returns for a second season.

The second season of Victoria opens in Afghanistan, with shivering soldiers fending off the freezing conditions by huddling together beside a fire. It’s a world away from the monarch’s privileged existence inside Buckingham Palace, though she appears increasingly frustrated at the number of servants on hand to comfort her as she is pushed about in a wheelchair, just weeks after giving birth.

The opening scenes reveal a glimpse of the challenges facing Victoria as she learns to juggle her new responsibilities as a mother with those of a dedicated Queen. In the next room, Prince Albert is among a large group of politicians, including prime minister Robert Peel, as they discuss the next move for their troops abroad, preferring not to trouble Victoria with news of foreign affairs until the headstrong monarch barges in, going against both medical advice and her mother’s wishes.

Picking up one month after the end of season one, Jenna Coleman and Tom Hughes reprise their roles as Queen Victoria and Prince Albert as they face challenges at home and abroad across eight new episodes. Produced by Mammoth Screen and distributed by ITV Studios Global Entertainment, it is written by series creator and executive producer Daisy Goodwin.

Once again, the show is exquisitely shot and designed from the outset, with the stunning backdrop of the palace belying the real filming location, a disused aircraft hangar in Church Fenton, Yorkshire.

Coming to the fore this season is actor Nigel Lindsay, who plays Sir Robert. The politician initially enjoyed a fractious relationship with Victoria but she slowly warmed to him during season one. Now the series is back, Lindsay promises viewers will see a lot more of him now that he is prime minister.

“I’m in every episode, although there are a couple of episodes where they go off to France and Scotland and I stay at home to run the ship, but I’m around the whole time,” he says. “I’m in charge, basically. I think they were thinking of changing the series to Peel & Victoria but I said no, it was too embarrassing!

“In season two, you see Victoria and Peel finally getting to understand and like each other. It takes a long time but you finally see that. There are still a lot of scenes where he’s pretty stuffed up and going into the office just telling her what the order of the day is and they’re not bonding, but they do by the end.”

As ITV’s spiritual successor to fellow hit period drama Downton Abbey, there was a lot riding on the success of Victoria. But after season one drew critical acclaim and record ratings, Lindsay says the atmosphere on set was more relaxed this time around.

“There’s a little less pressure this year, although you want to keep the standards up,” he admits. “But a lot of the crew is same, you know the other actors and you know your character, so everything is a bit more relaxed and I think that helps with the filming. If you’re happy and relaxed when you’re working, it tends to be borne out by the drama and shows how good the drama can be. I’ve had a really good time this year and I’m sorry to leave it.”

When is a spoiler not a spoiler? When it’s a historical drama, perhaps. As season two ends around 1845, it tallies with the end of Sir Robert’s premiership and will see Lindsay written out of the series should it move forward with a third season in 2018. The real Sir Robert died in 1850.

“When I did my last ever scene on Victoria, I was expecting the traditional send-off – when a person finishes on set, you get a round of applause and it’s all very moving,” he explains. “But it was lunchtime and everyone forgot. As we finished the scene, they’d all buggered off to get their sandwiches. But Jenna, bless her, called everyone back and said, ‘You do know this is Nigel’s last scene.’ So they call came back to say goodbye, which was very nice.”

It’s a story that speaks to the relationship Lindsay enjoyed with Coleman as their characters shared more time on set. Their final scene together saw the pair sitting around a large table discussing the queen’s impending visit to France. “It was lovely,” Lindsay recalls, adding that Coleman has really grown into her character this year.

“There was a lot of pressure on Jenna in the first season, playing Victoria in a series called Victoria. She got ill in the first season because she worked so hard; it was quite tough. But this season is more relaxed and I thought Jenna and I got a real rapport going by the end.”

The same can’t be said for Lindsay and the horse he had to ride during filming, with the actor finding himself literally left behind by Hughes in one horseback scene. “I sat in a carriage last year but this year I rode a horse in three different scenes,” he says. “It was quite fun but Tom likes to give it a go on his horse so the trouble is, once he’s off, my horse will follow because I don’t know what I’m doing.

“There was one scene where Tom suggested we ride off either side of the camera. I thought that was a really good idea but I didn’t realise quite how fast he was going to be going, so I followed on behind as gamely as I could. My hat flew off but I think that was off camera.”

Currently filming Netflix’s forthcoming mystery Safe, also starring Michael C Hall (Dexter) and produced by Red Production Company, Lindsay says he finds it easier to embody a character in a period drama than in a contemporary series where a character might be similar to his own personality or situation.

“Obviously it’s a little less naturalistic when you’re doing a period drama but you get so much help on Victoria, from the set to the costumes to the language,” he explains. “Something like [ITV crime drama] Unforgotten, I find quite difficult because I was playing what I am – the husband of somebody. When it’s very near to yourself, I always find that more difficult. But you have to trust yourself that doing nothing is OK. If he speaks like you, that’s fine. Whereas with Victoria, I get to take myself away into a different century with different clothes and a different accent. I find that easier to make myself believe that I’m somebody else.”

As Victoria’s mother, the Duchess of Kent, German actor Catherine Flemming enjoys a combustible on-screen relationship with Coleman, as the monarch often chooses to ignore her motherly advice.

“Very often, children find it extremely difficult to accept what their parents think is best for them,” she says. “In the case of Victoria, everyone seems to want something different from her, pulling her one way and the other. And as her mother, the Duchess tries to protect her child, but the child has other ideas. She is in the process of becoming a queen but, for the Duchess, she is still her little child. No wonder there are conflicts between them.”

Off screen, that couldn’t be further from the truth as Flemming describes Coleman, who picked up a Golden Nymph award in Monte Carlo earlier this summer for her role as Victoria, as “a really great young actress.”

She continues: “She gives 150% in every scene she’s in and it is a gift to play opposite an actor like that.”

In the first episode of season two, which debuts on ITV this Sunday, Victoria appears to be as dismissive as ever of her mother and her advice, but Flemming hints at a rekindled relationship between the pair.

“There is a beautiful scene where I am allowed to hold my grandson, Victoria’s youngest child, and I look at him and say to Victoria, ‘He has your eyes.’ At first she seems sceptical, but then she looks over my shoulder at the baby and seems to get soft all over, and says simply, ‘Perhaps,’ and her eyes get a little misty. This is the beginning of a new relationship between mother and daughter.”

Understandably, the actor describes the greatest challenge on set as mastering English, admitting that, like her character, she came to England without a perfect command of the language. “But it was a great privilege to take part in the series. It is a dream to play the mum of Queen Victoria. I love history and am able to learn so much about this particular period of British and German history.”

As German dramas become more popular among international audiences, Flemming is keen to work outside her homeland again in the future. For now, though, she is back in Germany working on Rübezahl, a family drama based on a local fairy tale, in which she plays Baroness Ottilie von Harrant, adversary of the gnome Rübezahl.

“It is true that German productions are gaining in popularity and in quality, especially when they tell their own stories instead of copying them from abroad,” she adds. “For me it was a great education to see how such an amazing television series was produced in Great Britain and, yes, I would love to work abroad again.”