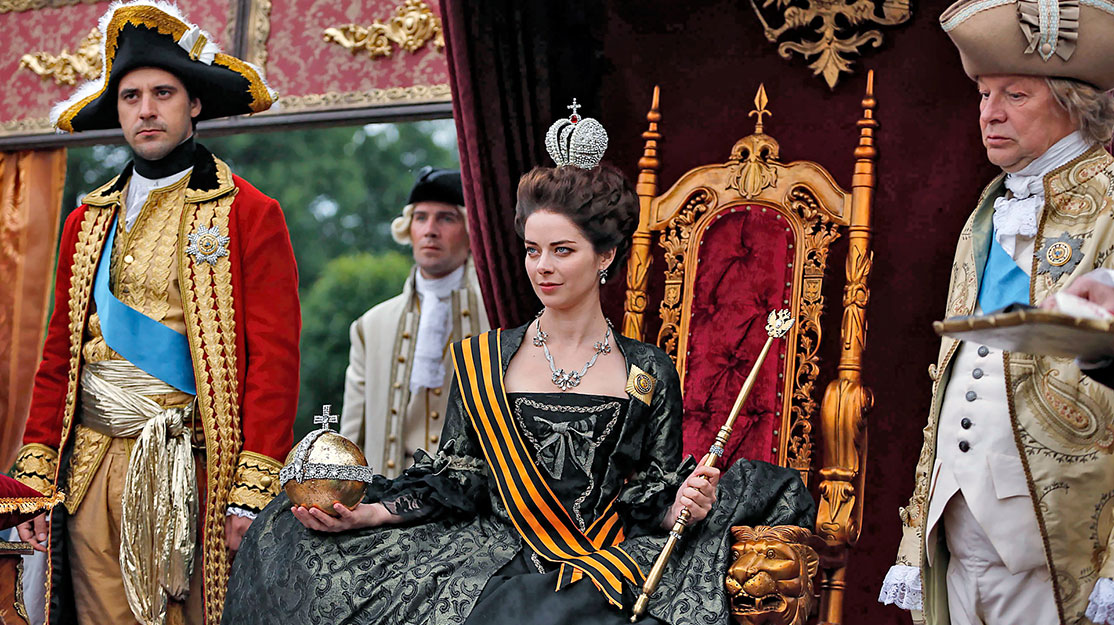 Writing for DQ, Alexandra Modestova, director general of Russian film and television consultancy Expocontent, explains how series such as The Road to Calvary and An Ordinary Woman are leading the rise in female-led dramas in the country.

The global market has started to open up to Russian drama. As stories have focused on the domestic market for the past 10 years, Russian series were known to offer traditional values – strong, powerful men who rule the world and drive the story, and women filling mostly secondary roles.

But times are changing. Since top Russian producers now focus on the global market and make series intended for worldwide audiences, they have to adapt the way Russian women are seen and presented by local television.

Female-led shows where women drive the story have begun appearing over the past few years, and that’s quite a step forward for the local industry. Among the most recent examples are Mata Hari, Mathilde, Ekaterina (pictured top), Sophia, The Road to Calvary, Better than Us and An Ordinary Woman.

The latter is a compelling example of another major change for Russian female characters: they can now be complex. Produced by Look Film and 1-2-3 Production for TV3, An Ordinary Woman centres on a married woman with two kids and a small flower shop. It turns out she is secretly running a prostitution network to fully cover her family’s needs, which her husband is incapable of doing. That might seem a radical way to help one’s family, but the story carries a great deal of irony and deep thought, depicting a strong woman in a world of weaker men.

The heroine is a mother of two daughters and a caring wife, yet she can be cynical, cold-headed, even cruel in her secret (but very real) life. She is a complicated, independently minded woman who has flaws and doesn’t fit into that typical kind of ‘perfect’ female characters who are too good to play by their own rules. So the title is significant – any ‘ordinary’ woman watching the series in any part of the world shares her character and complexities, her flaws and private thoughts. It’s no surprise that the series was immediately picked up by an international distributor, Cineflix Rights.

The series may seem to broadcast a new message for the local audience, but in fact women have always been strong in Russia, so it’s not only down to contemporary stories.

Several period dramas from Russia television and radio revolve around female leads based on real women in different times and circumstances. Ekaterina tells the story of the Russian empress Catherine the Great. She arrives in the country as a young girl and becomes the most powerful woman in Europe. Another drama, Sophia, is dedicated to the first influential woman in Russian history, Sophia Palaiologina, grandmother of Ivan the Terrible, who managed to survive in a harsh world filled with conspiracies. She supported the integration of a divided country and helped to push out invaders and build the Kremlin in Moscow.

These memorable heroines make their own way in a male-dominated world. They are smart and decisive enough to hold power and influence during periods when this was extremely unusual for women. These productions provide accurate historical context but with a modern look, so these women are similar at their core to women today: ambitious, intelligent, independent, passionate and imperfect.

Other compelling examples of shows where women dare live, feel and make mistakes are The Road to Calvary (NTV Broadcasting Company, distributed internationally by Dori Media) and Mathilde (Rock Films). The Road to Calvary is based on the novel by Alexei Tolstoy and follows Russian intellectuals through the revolution of 1917 and the Soviet era, telling the story of two sisters. Here an absolute classic is reinvented by and for a younger generation. The young still read classic literature but nowadays they need to look at the story through a different lens.

Mathilde, presented at Mipcom in Cannes last year with support from Made in Russia, tells a classical love story: the last Russian emperor and his affair with an attractive ballerina. Again, it shows a woman full of passion who follows her desires boldly. The whole world is against her but she is able to stand up to it.

It seems that science fiction is also seen as a place for women. Better Than Us, from Yellow Black and White and Sputnik Vostok Production, centres on an android who seems to have her own thoughts and intentions, and looks at the impact she has on the humans around her. She is perfectly beautiful, yet any evil intentions towards her end badly for any potential offender. The series has just been acquired by Netflix from Start Video, the rights holder, and will become the first Netflix Original from Russia.

The android woman is played by Paulina Andreeva, a rising star of Russian TV and cinema. She also plays the lead female role in Method, a series by Sreda that was among the first Russian projects acquired by Netflix. Andreeva appears as an ambitious young law enforcement graduate who is taken on as a trainee by a famous detective, her idol. But his methods of tracking down dangerous criminals and maniacs aren’t anything like she imagined.

The past few years have seen a range of high-end shows from Russia that are driven by female leads. Although there may not be many of these yet, the Russian TV industry is going international and following global trends. This includes the necessity to let women have a distinct voice and fair representation on the screen. These days fair means complex. Like real women and like the new, younger audience, female characters have to live life on their own terms. The choices they make may be different – they might be married or single, a tender mother or child-free, a successful business woman or a housewife, even a criminal, or a combination of all these.

The main point is it’s their own choice.