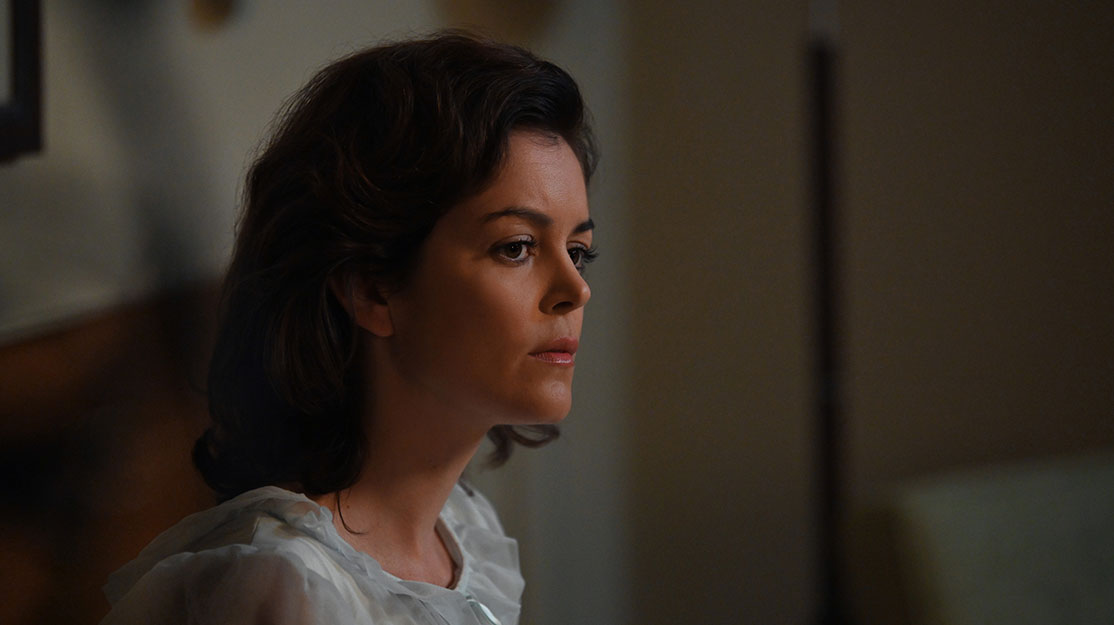 Nora Zehetner speaks to DQ about playing Annie Glenn in space drama The Right Stuff, which chronicles the early days of the US space programme and the launch of the Mercury Seven.

As three new astronauts settle in to life aboard the International Space Station, those of us left on the ground can enjoy no end of television dramas that seek to inspire thoughts of travelling beyond the Earth’s atmosphere.

But while recent Netflix addition Away imagines a future in which an international crew embarks on a three-year mission to Mars, Disney+ drama The Right Stuff looks to the past to explore the early days of the US space programme and the story of America’s first astronauts, the Mercury Seven.


“We probably all want to get off this planet right now. Space seems like a pretty good place,” jokes Nora Zehetner, who plays Annie Glenn in the series. “The interesting thing to me was thinking about what it was like to see somebody go to space for the first time, to not know what would happen, to not know whether you could. It’s this idea of what might be out there and being able to be out there in the stars and look down and see that there’s just so much more. If you have any interest in exploration, that’s the ultimate goal.

“When I was growing up, people had already gone up [into space]. It was still an event; it was exciting to see it happen, but it was just what happened. People went to space. It was, ‘OK, you can do that.’ It’s really fun to tell that story again to people who don’t know it. It’s pretty awe-inspiring to see all these people coming together to make the impossible possible.”

Based on Tom Wolfe’s novel of the same name, which was previously adapted as a feature film in 1983, The Right Stuff opens at the height of the Cold War in 1959 when the newly formed NASA selects seven test pilots to become astronauts, known as the Mercury Seven. As they competed to be the first in space, they also became instant celebrities and were pushed to their limits.

The two men at the centre of the story are Major John Glenn (Patrick J Adams) and Lieutenant Commander Alan Shepherd (Jake McDorman), though the eight-episode series also follows the astronauts’ families, including Zehetner’s Annie, who must overcome a speech impairment in the glare of the public eye.

Though her husband would become one of the first people in space before later enjoying political life as a US senator, Annie Glenn became a notable public figure in her own right before she passed away aged 100 in May this year. Having battled with a stutter from an early age, she became a campaigner for people with disabilities and was recognised numerous times for her work supporting people with hearing and other communicative disorders.

“She’s such an amazing woman. I was completely terrified to play her because she is such a public figure and also because she had an 85% stutter,” Zehetner says. “I was so worried that I wouldn’t do her justice. I just wanted to get it right.

“I tried to embody her spirit. There wasn’t a lot of footage of her giving interviews at that time. There are a lot from later in her life when she became an advocate for disabilities and speech impairments. By then, she was able to mostly cure her stutter, so it changed everything. I watched a lot of YouTube videos of young people with stutters but I just wanted to capture her spirit because, if you’re just trying to mimic somebody, it’s almost like a parody sometimes. The performances I like when I see people playing somebody, you’re not thinking about the actor because that person in that moment is what you know.”

Zehetner came into the audition process late, admitting she almost missed her chance to join The Right Stuff. She read for the part long after other actors went up for the same role but, after her first meeting with producers, she hadn’t left the car park before they called her and asked to come back for a chemistry read with Adams.

“I was terrible at it at first,” the actor says of performing with a stutter. “I didn’t have a lot of time to prepare but a friend ran lines with me and he said, ‘You’re normally good at this. You’re terrible.’ I just killed myself for a day and a half trying to get it right. I also had to learn a song because Annie was an amazing singer as well, so I had to sing in the audition, which was deeply mortifying. Then I got it and I did spend some time with this wonderful voice coach, Howard Samuelsohn. By that point, it was more of a technical thing – how many words do I stutter, which words do I stutter on – and we’d go back and forth to see what seemed natural.”

Though the story focuses on the astronauts preparing to fly into space, the series slowly reveals more of their personal lives and their relationships — from John and Annie’s All-American appearance to Louise Shepherd’s resilience in the face of her husband Alan’s transgressions.

“Everybody who knew them said she was the backbone of their relationship,” Zehetner says of her character. “He was so strong and such a leader in life, but when he went home he deferred to her. She’s very strong, very feisty and funny. She liked to make a lot of jokes.

“It’s hard in the first season when you have 13 main characters, because you’re trying to establish all of them. Most of our stuff is just about the two of us. But hopefully, once we move forward and we get to next season, you’ll see more of her. It was really just about finding that relationship with them because they have such a beautiful love story, especially in contrast with a lot of the other astronauts who frankly did not treat their wives quite as well. That love was the thing that was grounding me throughout the show.”

The actor was able to glean information about the couple from letters they sent to each other when they were in their early 20s and John Glenn was stationed overseas just after they had married in 1943. As for working with Suits star Adams, Zehetner describes her on-screen husband as an “open and generous” actor.

“Some people come in and they have an idea of what they want to do and they’re closed off, even if you’re in the scene with them,” she says. “It was always just like playing when we were together. There was a lot of give and take and it was really lovely.”

Zehetner’s television career has seen her appear in series such as Everwood, Heroes, Grey’s Anatomy and Designated Survivor. But The Right Stuff isn’t the first time she has played the wife of an astronaut, having also starred in US network ABC’s 2015 drama The Astronaut Wives Club.

She says it was difficult for these women to come to terms with the US public and people around the world clamouring for information about the first astronauts and their families.

“Their husbands are test pilots, which is a dangerous job, so every day you don’t know if someone’s going to knock on your door [to tell you they have died],” she says. “To suddenly go from that to being on the cover of Life magazine and every person in America and the world being interested in everything that you do — what colour of lipstick you’re wearing, what you are cooking at home — they were like our first reality stars in a way, and they definitely didn’t sign up for it. The husbands did in a way, but I don’t think anybody realised how huge and how taken America was going to be by it. I can’t imagine anything like that.”

Commissioned by National Geographic, The Right Stuff debuted on Disney+ earlier this month. Filming for the series took place in Orlando, Florida, where the production team was able to take advantage of shooting opportunities at Cape Canaveral, the US Air Force base that has been the location of some of the most significant rocket and space shuttle launches over the last 60 years.

“Shooting there was really neat,” Zehetner says. “Before we even started filming, they took us on a tour and we went to the launch pad where people actually took off from. But then Orlando is just really hot and sweaty. I remember my first day on set, it was pouring with rain because it was hurricane season. Every time there’s a lightning strike, you have to shut down for 30 minutes and you have to shut off all the generators. It’s like a million degrees and then you wait. But then if there’s another lightning strike, you have to wait again.

“There was a lot of waiting around. Three weeks in, we all had to be evacuated because they thought a hurricane was actually going to hit Orlando, so we all went back to LA and we had a week off. Then it stopped raining as much and it was just hot.”

Filming at the launch site added another layer of authenticity to the series, which showrunner Mark Lafferty spent two years developing and researching. “I just had the utmost trust in him,” Zehetner says. “I would look up stuff as well, but he knew so much. The level of detail with the authenticity is really due to him and our amazing production designers and costumers. We’re all slightly nostalgic for a time we didn’t live in. You always think some other time was better than whatever time you’re living in, so it’s fun to do any scripted period piece. I just love the costumes because as soon as you’re in those, you feel like a different person.”

The actor has spent her downtime during the Covid-19 pandemic learning to play guitar and having skiing lessons, and she believes The Right Stuff offers viewers the perfect opportunity to escape into a daring and inspiring story many people might not be familiar with.

“It’s a really lovely, exciting look at a great moment in history and something really fun to delve into,” she says. “But it’s not just about space. It gets into the psyche of these people. I like that it doesn’t paint everybody to be perfect, because you realise that you can accomplish great things and not be perfect. Sometimes people are too hard on themselves and think they’re not good enough to do something. If you just believe in yourself and push forward then you can really make things happen.”