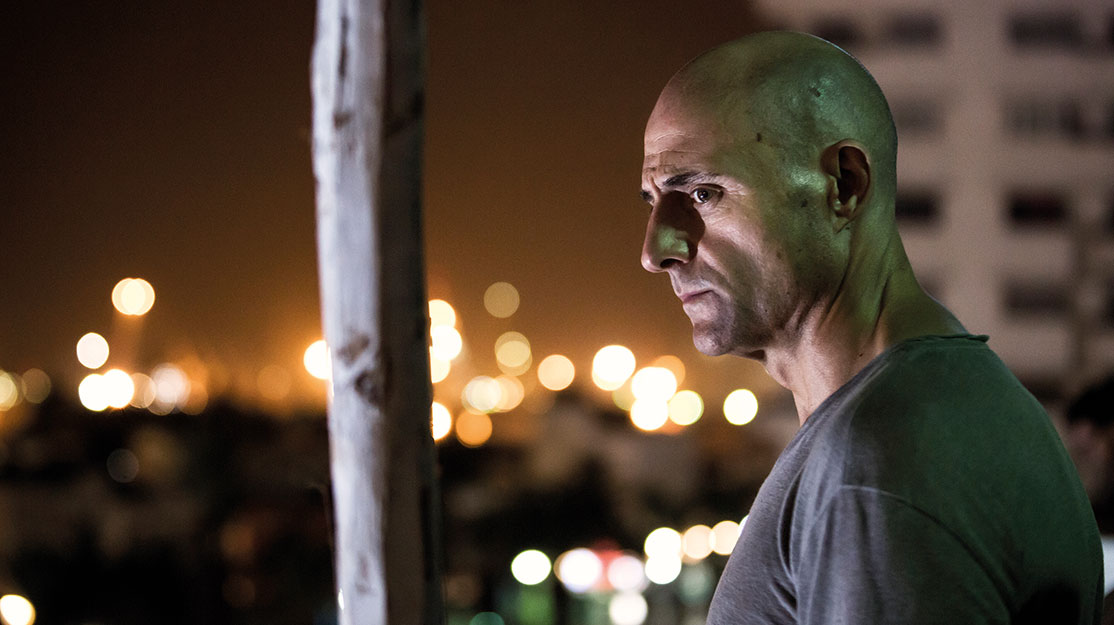 While comedians and satirists currently find themselves swimming in fresh material as Donald Trump’s presidency and the ongoing Brexit negotiations lurch from crisis to crisis, what’s a drama screenwriter to do when real-world events threaten to overtake and overshadow their next storyline?

That was the dilemma facing showrunner Matthew Parkhill and the producers of Deep State, the first original series commissioned by Fox Networks Group Europe and Africa. “When we were in the writers room, we were constantly talking about what was in the news – the new administration in the US, stories coming out of the UK – and we felt it was very important to reflect that,” producer Tom Nash explains.

“But in drama, we try to stay away from the absolute front line of politics. We were a little more interested with what was going on behind the curtain, so obviously that’s not necessarily as well documented, which I think is actually helpful because events can’t overtake you as much.”

Set in the UK, the US, Iran, Lebanon and France, Deep State is a globetrotting thriller that tackles the world of espionage. Mark Strong (Tinker Tailor Soldier Spy, Zero Dark Thirty) plays ex-spy Max Easton, who is brought back into the game to avenge the death of his son, Harry (Game of Thrones’ Joe Dempsie), only to find himself at the heart of a covert intelligence war and a conspiracy to profit from the spread of chaos throughout the Middle East.

Running parallel to the espionage storyline is a domestic plot that sees Max’s wife (Lyne Renée) discover he is a spy with an ex-wife and a son from a previous marriage.

It’s day 71 of production, in sunny mid-August, when DQ arrives on the London set to see filming of the eighth and final episode. A branch of US steakhouse chain Smith & Wollensky is being prepared for shooting as, suitably, the restaurant is doubling for an establishment in Washington DC. American flags have been placed on the bar between table lamps, while a large model of the Statue of Liberty is standing in front of a wall mirror.

When the cameras start rolling, extras seated at tables are served plates of fruit and pastries and glasses of orange juice as Strong’s Max (pictured top) strides into the venue and sits down opposite a US senator before presenting him with a video containing evidence that lays out the show’s central conspiracy. Between takes, Strong hovers by his starting point, fixing his jacket as he waits for Parkhill, who is directing this final episode, to call action once again.

In a later scene, two cars pull up in the middle of a road, again set in Washington but in reality only a stone’s throw from the River Thames. Max is with fellow spy Leila (Karima McAdams) and one of their American fixers, an old friend who helps them during their covert trip to the US.

As befits a series set around the world, the production spent 10 weeks filming in Morocco, which doubled as Beirut, Tehran and the Pyrenees, before switching to London for another 10 weeks to complete scenes set in the UK and US capitals.

Creator and showrunner Parkhill, who directs the final four episodes, says he was inspired to write the series after reading an article about a construction company that made US$39.5bn from the Iraq war.

“It got me thinking, ‘That’s a lot of money. How do you try to engineer the continuation of those good profits?’” he says. “There’s that line from the Sex Pistols about cash from chaos, so that was one of the inspirations.”

Originally called The Nine, the show was renamed Deep State when Parkhill traced the origins of the term to the attempted assassination of a Turkish politician in the 1990s, believed to have been orchestrated by a group of high-level elements within the intelligence and defence services.

“When it became Deep State, it opened the show up a lot for me politically and it has become more interesting because of what we’re living through at the moment,” he explains. “Then, personally, it was always about the idea of whether you can start again. Can you make up for your mistakes in the past? That’s Max’s story. What I think is fascinating about the show is the juxtaposition of the thriller and the political elements with the domestic storyline, and they’re both as compelling as each other. You’ve got your action sequences, car chases and explosions but then it’s a show that’s not afraid to breathe and stop and exhale and be with the characters.”

Morocco was identified as a potential filming location quite early in the 16-week pre-production process, presenting the production team with the challenge of plotting shooting schedules in Casablanca and London while also determining when directors Parkhill and Robert Connolly would be in each location.

“A big question for us was where we were going to use for France when we were shooting in Morocco and the UK,” producer Nash says. “Nothing really doubles with France, but there was this village in the Moroccan mountains that had been built by the Swiss in the 1920s, and it looked like a Pyrenean town – we couldn’t believe it. So we were also able to shoot all of our French section in Morocco. That was a big factor in making our choice.”

The producer recalls one particular day on set when the crew were tasked with filming the detonation of a car bomb. Located in the Iranian capital of Tehran, the set piece was actually filmed on a roundabout on the outskirts of Casablanca. “The locals were just so excited by the prospect of filming that we had hundreds of people surrounding us and cheering,” Nash says. “The roundabout was built up with flats all around it and we asked people to come down, but some of them locked themselves in and said they wanted to stay to get the best view of it.”

Hilary Bevan Jones, co-founder of producer Endor Productions, continues: “They’re cheering, banging metal and whooping and we’re trying to concentrate on the absolute split-second precision timing of blowing up a car, with a motorbike in shot, stunt riders falling out, people riding into shot. It has to be done to the millisecond. I spent a lot of time in Morocco with fingers in my ears because we were blowing up cars or having gun fights, but it worked really well.”

Fox boarded Deep State after being swayed by its mix of action and espionage. The show marks the first regional drama commission for the network and is due to air in 50 countries across Europe and Africa early this year. Fox Networks Group Content Distribution is selling the series worldwide.

“It’s a perfect fit for our channel,” says Jeff Ford, FNG’s outgoing UK MD and senior VP for original content, Europe and Africa, who is retiring at the end of this year. “It has that edginess and emotion – it is quite an emotional story but it’s also intelligent. It satisfies on so many levels and I don’t think anybody who’s looking for an emotional response, or just a visceral response or an intellectual response, will be disappointed. It delivers equally in all those areas and it will absolutely be a joy to watch.”

Sara Johnson, FNG’s VP of scripted development, adds: “What makes it a great, globally appealing show is that there are human beings at the heart of the story – there’s a beautiful emotional aspect that lies beneath an absolutely thrilling and quite exhausting story. It’s really pacey and exciting and we’re telling a great story.”

Strong man
If Mark Strong and the character he plays in Deep State have one thing in common, it’s that they’re both back doing jobs they’ve not done for a while. So while Max Easton returns to his former life as a spy, the series marks the actor’s return to television.

Strong’s last small-screen series was 2013’s Low Winter Sun, AMC’s crime drama based on the British miniseries of the same name. Since then, he’s appeared in movies such as Before I Go to Sleep, The Imitation Game and Miss Sloane.

“We’re all beginning to realise that television gives you the opportunity to tell stories in a much more interesting and complicated way than you can achieve on film,” he says during a break from filming Deep State’s final episode. “That’s not to say film doesn’t have its own merits but, over an eight- or 10-hour period, you can really explore character; you can take a narrative wherever you want to take it and open people’s imaginations to much more complicated stories.”

Strong is also no stranger to spy stories, having appeared in Zero Dark Thirty, Tinker Tailor Soldier Spy, Grimsby and Kingsman: The Secret Service. A sequel to the latter, Kingsman: The Golden Circle, was released last September.

“A lot of spy stuff gets written because the arena is perfect for drama,” the actor notes. “It’s got everything – betrayal, trust, danger, secrets. It’s the stuff of drama. It’s complicated enough and intriguing enough to have lots of different strands that make it very watchable.”

So what was it about Deep State that called him back to television? “There’s a school of thought that says you embark on a script and if by page 20 it hasn’t grabbed you, the chances are it won’t,” Strong says. “That’s a massive generalisation, but I can honestly say the thing about Matthew [Parkhill]’s script that I thought was amazing was the scope of it. You’re dealing with two time frames in the first episode straight away, you’re dealing with four different locations – Tehran, Beirut, London and France. French scenes are played in French with subtitles, Arabic scenes are played in Arabic with subtitles.

“There’s a real exotic flavour to it and, more than anything, I really wanted to read it and I didn’t feel like I was being spoon-fed the traditional TV fare,” the actor adds. “I felt like it was an attempt to make something really engaging. If it plays as well as it reads, we’re going to do well.”