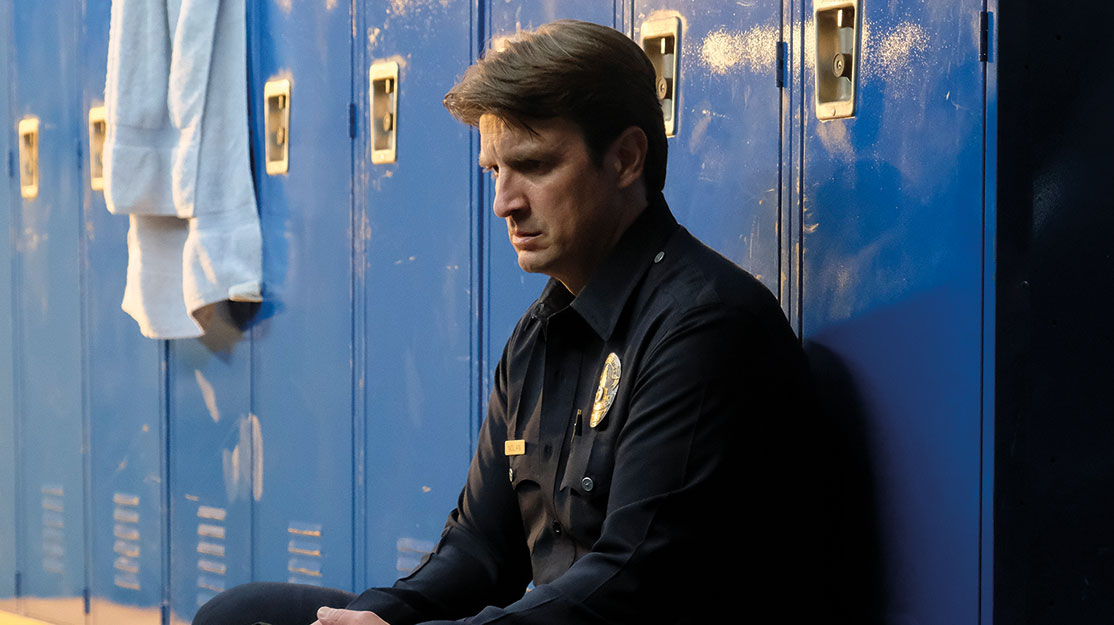 Castle star Nathan Fillion and showrunner Alexi Hawley reunite in ABC drama The Rookie. They tell DQ about creating a series that aims to break the formula of network cop series.

After playing the starring role in crime drama Castle for eight years, Nathan Fillion could have been forgiven for hesitating before signing up for another potentially long-running procedural.

Yet the actor had no second thoughts when he was offered the chance to reunite with former Castle showrunner Alexi Hawley and the ABC network on The Rookie. So sure was he that this show had all the elements of a hit series that, for the first time ever, he signed up before a script had been written.

“I’m an actor, I want to tell stories. And I’m in a really fortunate position where I can tell stories to millions of people, potentially internationally,” the actor says. “I’ve worked with Alexi before and I absolutely adore this guy. He tells great stories. I love the way he handles himself, I love his work ethic and I love the workplace environment he creates. So it was a no-brainer.

“We pitched the idea of this show and the elements to a number of networks, but ABC jumped on it. The odd part was there was no script. Now the scripts are here and we can watch it evolve. These characters have faces and voices. It’s been a fascinating process.”

The premise sees John Nolan (Fillion) pursue his dream of being an LAPD officer. But as the force’s oldest rookie, he’s met with scepticism from some higher-ups as he faces the challenge of keeping up with both the young cops and the criminals. The series also stars Alyssa Diaz, Richard T Jones, Titus Makin, Mercedes Mason, Melissa O’Neil, Afton Williamson and Eric Winter.

Hawley executive produces with Fillion, Mark Gordon, Michelle Chapman and Jon Steinberg. The series is coproduced by Entertainment One (eOne) and ABC Studios for ABC, with eOne also handling international distribution. The series has already been sold into more than 160 countries.

The Rookie, which debuted last week, is based on the true story of a real-life LA cop who joined the force when he was 42. Fillion says that’s where the series stops borrowing from reality, but as we see in the pilot, it’s not hard to imagine the disdain and mocking Nolan faces taking place in the real world.

“Rookies get hazed, they kick you around a bit to toughen you up,” Fillion says, foreshadowing some of the scrapes in which Nolan will find himself after starting to patrol the LA streets. “I don’t think it’s born out of, ‘I want you to suffer,’ it’s born out of, ‘You have to be tough for this job.’ They’re not there to make it easy on you. They’re there to make sure if this is your calling, being hazed won’t stop you.”

Meanwhile, the very nature of crime series means viewers can expect The Rookie to be inherently dramatic, with the pilot featuring a bank robbery, a wild shootout and scenes of domestic violence. “You only call the police when something has gone terribly wrong,” Fillion points out, “so it’s not an easy job. As a matter of fact, I think it’s probably terrifying.”

But anyone tuning in expecting to see Castle 2.0 is set to be disappointed, as John Nolan is a very different character from author-turned-sleuth Richard Castle. Most obviously, The Rookie is far more grounded in reality, though both series do share elements of humour and comedy.

“The Rookie has far more that people can actually relate to – family, trying something new and failing, not being in charge,” Fillion says. “Castle was in charge. Nobody told him what to do; he did what he wanted. There’s a unique freedom in fantasising about that, but John Nolan is not in charge. He’s the bottom. He’s not only a rookie, he’s the oldest rookie.”

The show went straight-to-series at ABC, though like fellow eOne drama Designated Survivor it still passed through the traditional pilot process, with Liz Friedlander directing that initial episode.

As well as Castle, Hawley also has credits from shows including The Following, Body of Proof and State of Affairs. The showrunner says The Rookie stands out, however, because the show is back on the beat of the traditional network cop show, alongside series such as Southland and Blue Bloods.

“To be able to tell stories about Nathan’s character as the oldest rookie, it puts him in a unique position as a character that opens a lot of opportunities storytelling-wise,” Hawley says. “And Nathan is the perfect actor for this. He’s so funny but he’s an everyman in the best possible way. You totally identify with him as someone who realises they’re not going down the path in life they want to be on. It takes a lot of bravery because the risk of failing is high yet the consequences are also high, which makes for great television.

Hawley admits he likes all parts of a showrunner’s lengthy list of responsibilities, although he concedes there are days when the role can be “overwhelming,” managing both the creative and production sides of the show.

“It’s a challenge every day but, at the same time, I just like it,” says the brother of Fargo and Legion showrunner Noah Hawley. “I come from the feature world, writing movies, where you have no power, no control. On the show, writers produce their own episodes. They’re there for prep, production and are involved in post, so it makes you much more invested in your story. As a showrunner, you’re just invested in all of the stories. It rests on your shoulders but, at the same time, there’s plenty of work to go around and you’re a fool if you don’t trust the people you hire to elevate everything and make it better.”

The biggest challenge on The Rookie, he says, was maintaining the standards and scale set out in the pilot. “Often you do a pilot that’s too big or you just can’t replicate it every week but it’s also really important for me to create an ensemble around Nathan that could really support him.”

Too good to turn down
From a pre-credits bank robbery and a secretive love affair to speeding police cars and a back-alley gun fight, director Liz Friedlander was faced with packing a lot of story into the pilot episode of The Rookie.

That she did so with buckets of visual flair, including one quick-cut sequence that sets the rookies up for their first day on patrol, is all the more impressive considering she hadn’t planned to helm a new series during the last pilot season.

But a longstanding friendship with showrunner Alexi Hawley – the pair had worked together on Fox cult drama The Following – and credits working for executive producer Mark Gordon meant she was instantly intrigued by the project. “I didn’t want to do a pilot last season, I absolutely wasn’t going to, and then they said, ‘Please read it,’ and the script was great,” Friedlander recalls. “There was a lot of opportunity to build a world that was fun, and between the script, Alexi, Nathan [Fillion] and Mark, the thing I was absolutely not going to do became irresistible.”

Friedlander loved the show’s central theme of starting over, with John Nolan changing direction later in life. She also wanted to make a love letter to LA, the city that serves as her home and the setting for the series, which she describes as a coming-of-age story for rookies facing new experiences for the first time.

The director quickly identified a visual style for the drama, one that mixes iconic and unfamiliar LA locations and makes good use of the body cameras worn by the LAPD officer to give viewers a first-person perspective of the action as it unfolds. Dollies or steadicams were used inside the police station where events are controlled; then in the field with the rookies, handheld cameras were used to reflect the unpredictable nature of life patrolling the streets.

The biggest set piece of the pilot takes place on a gridlocked Hollywood Boulevard, where Nolan confronts a baseball bat-wielding man. Permission was needed to shut the street – often closed to traffic for film premieres and award ceremonies – as well as to use a drone camera, while hundreds of extras were brought in.

“We had five cameras that were constantly rolling. We had maybe 500 extras but by the end of the day, a crowd of tourists had gathered so then we had this amazing free background,” she says. “It just made it look even better. It was exhilarating.”

Friedlander, who returned to The Rookie to shoot a car chase for episode five, is now working on new material, with no plans to do another network pilot in 2019. That is, “until there’s a script, a cast and a showrunner I can’t say no to,” she jokes.