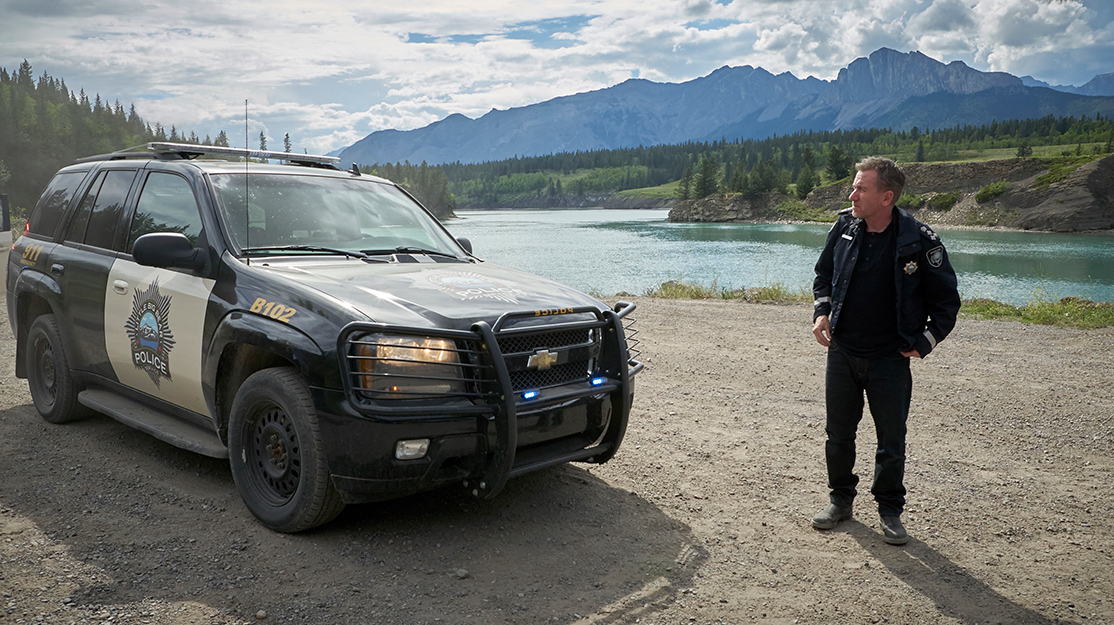 Twists and turns abound in Tin Star, Sky Atlantic’s Rocky Mountains-set drama that sees Tim Roth play a small-town police chief attempting to escape his demons. DQ hears from the star and writer/director Rowan Joffé about pushing the limits in this 10-part series.

Perhaps most famous for appearing in several Quentin Tarantino movies – including Reservoir Dogs, Pulp Fiction and The Hateful Eight – the actor has a knack for portraying menacing characters with a simmering intensity, with other memorable villainous turns in 2001’s Planet of the Apes and 2008’s The Incredible Hulk.

So when the early stages of Tin Star, his new series for Sky Atlantic, see Roth as a level-headed family man and police chief in the peaceful surroundings of rural Canada, it’s safe for viewers to assume that things are going to go south – and fast.

The 10-part drama, which launches in the UK on September 7, stars Roth as former London copper Jim Worth, who has upped sticks along with his family to escape a troubled past by beginning a new life in the Rocky Mountains.

All seems to be going swimmingly at first, with the new police chief – a former alcoholic – spending more time catching fish than criminals in the sleepy fictional town of Little Big Bear. But things soon take a dark twist as the arrival of a shady oil company coincides with a past that refuses to fade away, and an attack on his family turns Jim into a one-man wrecking ball on a quest for revenge.

Coproduced by Endemol Shine-owned firm Kudos Film and Television alongside Amazon Prime Video in the US, Tin Star is distributed by Sky Vision.

The show marks Roth’s first lead TV role since his only other major venture into the medium, Lie to Me, came to an end in 2011 after three seasons on US network Fox.

However, the actor reveals the decision to return to the small screen was not premeditated. “I wasn’t looking for a TV show,” he explains. “I put my feet up in the kitchen and I read a couple of [Tin Star] scripts, and I thought they were bonkers.

“That immediately gets my attention, and then the next question is, ‘Where the fuck does this go?’ And then I found out, and it’s interesting. So I thought, ‘I fancy this.’ Then you call [the producers] and tell them that, and they pay you shit-loads of money!” he jokes.

Roth says he was captivated by the “very, very anarchic story,” adding: “The minute I thought I knew what was going on, it was something different – we always got it wrong.”

Filmed on location in and around Calgary, Alberta, Tin Star makes full use of the region’s natural beauty, with sweeping shots of mountain ranges and rivers providing stark contrast to the ugliness that unfolds between the characters on screen.

Yet while one might think filming in such a place sounds like an actor’s dream, Roth offers a different view. “Having worked in Calgary, I have to say I wasn’t keen to go back,” he admits. “It’s nothing against Canada, but you’re talking about ‘Trumpland’ in Canada. It’s all flourishing – the oil and the corporations, the invasions of the local culture. It’s just there.”

It’s a view echoed by Rowan Joffé, who wrote and directed every episode of the series. “Canada looks like this wonderful, impeccable, clean place – and it is, until you look at what they’re doing with the tar sands out there,” he says, referencing the controversial oil extraction that has been gathering pace in the country. “It’s pretty horrific in many ways.”

Best known for writing 2007 horror sequel 28 Weeks Later and for penning and directing 2014 feature Before I Go to Sleep, Joffé became the latest in an growing band of contemporary movie directors to try their hand at TV drama when he signed up for Tin Star, his first major TV project.

The chance to take charge of what he describes as a “10-hour movie” proved irresistible to Joffé, who says: “Sky were always true to their word, which was, ‘You can author the show.’ And so we just ran with it.

“We thought there was absolutely no point in doing this unless we felt like we were taking risks. The opportunity to write what I wanted to write and to be able to collaborate with actors who I really admire, and for no one to tell me no at any point… It’s just been amazing.”

Joffé’s affinity for his cast – which also includes Mad Men’s Christina Hendricks as oil rep Elizabeth Bradshaw and Genevieve O’Reilly as Jim’s wife Angela – is clear, with the director revealing that they played an important role in shaping the plot.

“The story began to change and morph around the actors,” he says. “Without doubt, many of the best moments on screen – particularly in Tim’s case – were ad-libbed. Tim brought a level of wit and comedy to it that was way beyond my ability as a screenwriter.”

Joffé was “free with us and let us be free at the same time,” adds Roth, who particularly relished the chance to really get under the skin of a character across 10 hours.

He describes the experience as “much more satisfying” than working on network television’s standalone episodes – such as in Lie to Me – which he calls a “much harder job.”

“Theatre is where actors really exist, as opposed to film, which is the director’s world. But [television now] is very similar to the stage experience, especially now that there are so many good writers and so much rich talent involved.

“For us as actors, it’s incredible. We get to play more with television now – to invent, change, metamorphose, have fun and be challenged.”

Playing Jim was made more difficult by the increasing presence throughout the series of his dangerous alter ego, Jack, who Jim has learnt to keep at bay – as long as he remains sober.

Indeed, as the show progresses, Jack increasingly comes to the fore, simultaneously ratcheting up the violence and taking the show to “dark, shocking places,” according to Joffé.

“We went far; I wouldn’t have wanted to do it if we didn’t. It was just anarchy on the page,” says Roth, who credits Joffé for creating a character that tests audience sympathies.

“We take you to a very dark place, but the audience is supposed to be my ‘mate’ – they’re part of the fun too. On the one hand you enjoy the journey with this guy, and on the other you hate him.”

As for the suggestion of a second season, it seems Roth would jump at the chance. “In a hypothetical world, if we got to do another 10-hour movie, I’d be happy with that. I’d like to chip back at and fuck with this character again.”