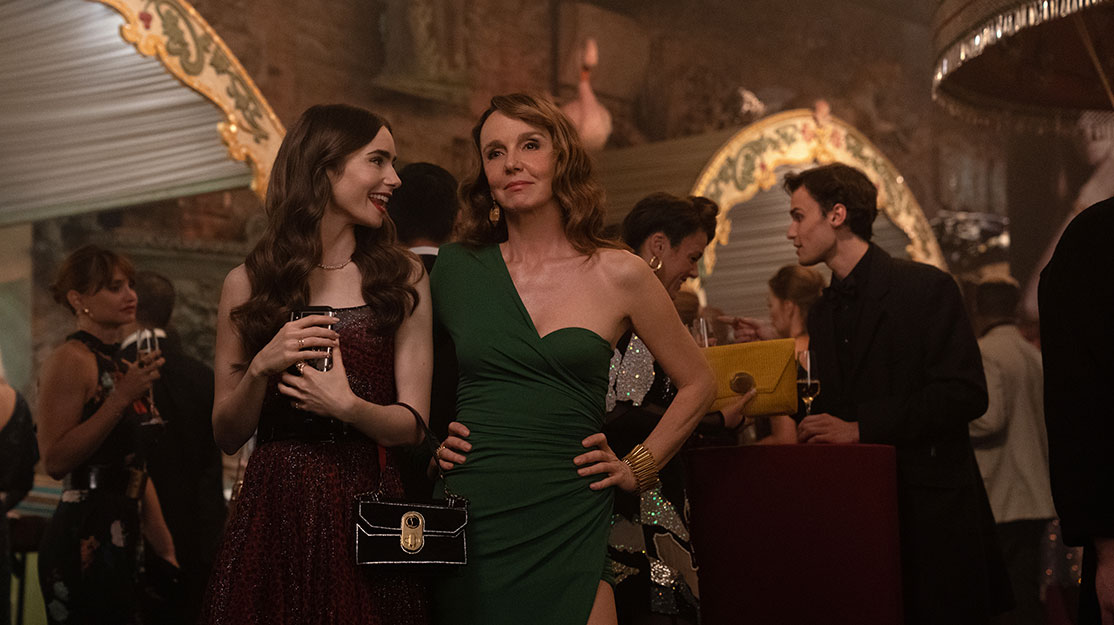 US showrunner Darren Star speaks to DQ about realising a long-held ambition with his latest series, Emily in Paris, and discusses the legacy of an iconic back catalogue that includes Beverly Hills 90210 and Sex & the City.

Across his 30-year screen career, Darren Star has often found a way to send his characters to Paris. In the third season of Beverly Hills 90210, Brenda (Shannen Doherty) and Donna (Tori Spelling) enjoyed a summer in the City of Light, while Sex & the City’s Carrie (Sarah-Jessica Parker) made her way across the Atlantic in the show’s sixth run.

Now Star has gone one further and made a series set entirely in the French capital. Emily in Paris, which debuted worldwide on Netflix this month, introduces Emily (Lily Collins), an ambitious 20-something marketing executive from Chicago who unexpectedly lands a job in Paris. When she arrives, she finds her new life is filled with intoxicating adventures and surprising challenges as she struggles to win over her work colleagues, make friends and navigate new romances.

“I am a bit of a Francophile. I love Paris. I have been since I was a kid backpacking around Europe,” Star tells DQ ahead of his appearance at the virtual edition of French television festival Canneseries today. “I fell in love with the city and have subsequently been back many times since. And I just thought, ‘Imagine how wonderful and difficult it might be to actually work and live there.’

“I wanted to tell a story about this young woman who came to Paris where it wasn’t her dream, where she wasn’t prepared. She didn’t really have any interest in travelling. She led a fairly sheltered life in the Midwest and was thrown into the city. I also wanted to do a show where the theme is travelling, being in a foreign country, leaving your comfort zone and how it just expands who you are as a person. It’s a real journey of self-discovery for Emily as the series progresses, because the experience of living in Paris changes her.”

Through the 10-episode season, despite some initial clashes as Emily struggles to acclimatise to her new surroundings, she and her colleagues develop some affection for one another as she begins to feel more at home. “It changes her in the sense that she starts to look at her life as something bigger than she imagined it was,” Star adds.

Despite having planned the series for some time, the creator says he didn’t want to make Emily in Paris – which was originally developed for Paramount Network before moving to Netflix – until the TV industry had advanced to a position where it was possible for the US production to film entirely in France.

“Finally, we’re at the point in television where we can go and film an entire series in Paris with the level of production values that are equal to cinema,” he explains. “That’s the way I wanted to do it. It’s also nostalgic for me to imagine myself young in a city like that, and it’s great to be in those shoes.

Star says the prospect of filming in Paris was daunting at first, owing to the prospect of working in a foreign country with a new crew. “But the crew turned out to be just fantastic. The actual process of filming it was no different from filming in the States. They delivered above and beyond my expectations. They were just so passionate about the show and also about sharing the city with us.”

At a time when many viewers are stuck indoors because of the pandemic, Emily in Paris doubles as a postcard from the French capital, with no shortage of scenes set in and around some of the city’s major landmarks. While the glossy series has received mixed reviews for its representation of France through familiar cliches of the country and its people, Star says he wanted viewers to experience the city and its culture through Emily, who is discovering the sights for the first time.

“If it’s the first time you come to Paris, that’s what you see, and what knocks you off your feet is how beautiful the city is,” he says. “The show embraces the cliches because Emily’s experiencing the cliches for the first time. So to her, it’s fresh and it’s the way she’s perceiving the city. I would say that in the way the Sex & the City glamorises New York, the show does the same for Paris. It’s seen through that kind of lens.”

Star’s screen career dates back to feature films Doin’ Time on Planet Earth (1988) and Teen Agent (1991). The latter provides another link between Star and France, focusing on a high-school student who is mistaken for a spy during a school trip to the country.

1990 saw the debut of his teen drama Beverly Hills 90210, which spent a decade on screen and led to numerous spin-offs, including the equally successful Melrose Place. Set among a group of teenagers living in the titular wealthy community, the series made household names of stars including Doherty, Spelling, Jason Priestly and Luke Perry.

Star went on to create shows including Grosse Point, Miss Match and Younger, which is now in production on its seventh season for US streamer Hulu. But his name is particularly synonymous with Sex & the City, the HBO series that debuted in 1998 and ran for six seasons. The seminal drama followed the stories of Carrie, Samantha (Kim Cattrall), Charlotte (Kristin Davis) and Miranda (Cynthia Nixon) as they explored sex and relationships in New York City, becoming a cultural phenomenon that spawned two feature films and a spin-off series.

“At the time I did Beverly Hills, I was a screenwriter, and television was not what you did if you were writing movies,” Star recalls. “But I found it to be amazing because I realised how much creative control I had as a writer on a show, and also just how much got produced so quickly. So I love television. And for me, Sex & the City was a big game-changer because I created it almost like an independent film for television. It wasn’t meant to be commercial; it was meant to be exactly what I wanted it to be. Without any restrictions on content, it was frank and honest.

“HBO changed the game in terms of being able to see that, content-wise, there were no guardrails in terms of what you could say or express. Since that point, television’s growth has been explosive in terms of the amount of content and the production values.”

It was in the second seasons of both shows that Star realised how popular they were becoming, with the stars of 90210 gracing the cover of Rolling Stone while Sex & the City was splashed on Time magazine.

On Sex & the City’s legacy in particular, Star says: “It’s amazing. When you’re doing something like that, you can’t ever imagine what the impact is going to be. But I’m so happy it opened the door and made stories from the female point of view prove they would attract an audience and be successful.

“With 90210, there was a big question: could you ever have a show about teenagers that an audience would want to watch? TV has become so diverse, but when I started there were four networks and things had to have a very broad appeal to succeed – and it was all ratings-driven. There was no niche programming. But the stories have become so much more personal. The shows I love – Girls, I May Destroy You – are female-driven shows that feel so personal to their creators and those voices.”

Outlining a writing process that hasn’t changed much over the years, Star says he prefers to spend lots of time in the writers room and to dig deep into every beat of the story. “The difference now is it’s being done on Zoom, which is a little strange,” he says of how development has changed during the pandemic, which is why taking viewers to Paris with Emily offers a bit of shiny escapism in otherwise dark times.

“Now more than ever, people want a vicarious trip to Paris. We can’t go there,” Star says. “It celebrates the importance of a love of travel and a love of Paris. At this point, I just hope people are looking for a good 10 episodes of escape.”