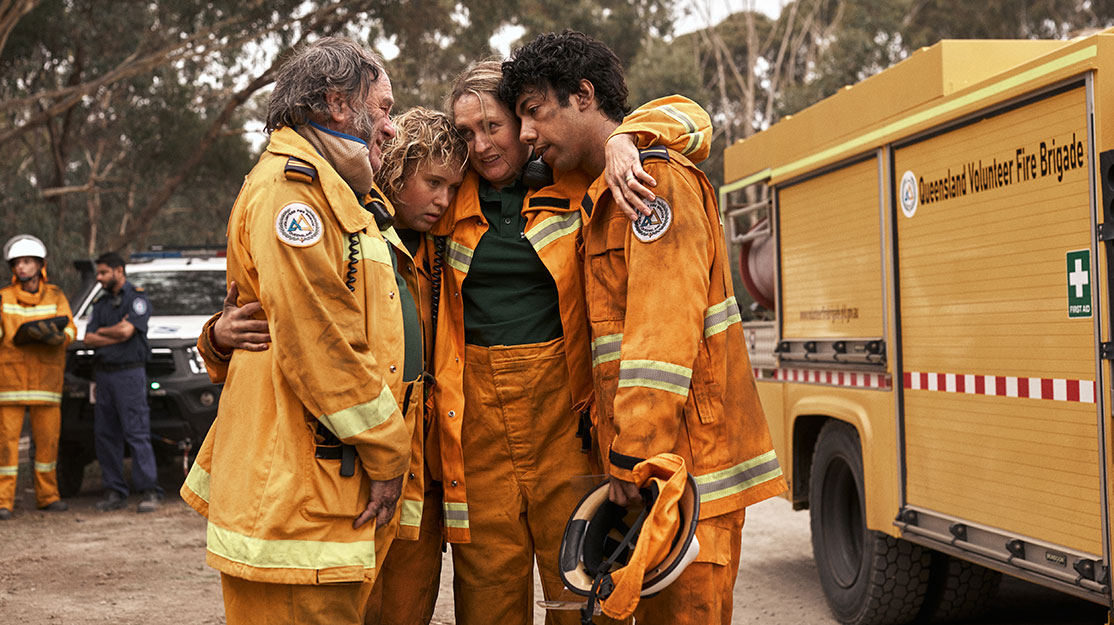 Australian anthology Fires dramatises stories of courage and survival during the real-life bushfires that devastated parts of the country. Co-creators Tony Ayres and Belinda Chayko joined actors Eliza Scanlen and Hunter Page-Lochard to preview the series.

The series will weave together character studies inspired by true stories from the catastrophic fires, with each episode set in a different community and drawn from reports by ordinary people caught up in unimaginable circumstances and the impossible choices volunteer firefighters, families and others were forced to make.

Ayres and Chayko joined actors Scanlen and Page-Lochard to preview the upcoming series as part of Content Australia On Demand.

The series is based on very recent events. How did the project take shape?
Ayres: It happened very quickly. I was watching the bush fires like everyone across the world, seeing what was happening rapidly escalate, and I suggested to the ABC this might be a good idea for a TV series. They said yes straightaway and then I spoke to my dear friend and colleague Belinda Chayko. She agreed and we decided we had to do this fast and get it on the air as soon as possible.

Chayko: We actually began our first brainstorm on March 23 last year, just before everything locked down [due to the Coronavirus pandemic], so we’ve developed the series entirely by Zoom. We had the scripts ready within nine months, which is faster than I’ve ever worked. We were filming one year and a couple of days after our very first brainstorm. It was a very fast turnaround.

What are the challenges of a project based on real events that happened so recently?
Chayko: Sensitivity is incredibly important. This was a really traumatic experience for so many Australians – in fact, all Australians, even if they weren’t directly involved. It was important to us that what we were doing with the series was honouring the people who went through that and not trying to be spectacular in any way. We wanted to be really authentic and to tell the stories in a really immersive way.

Why did you choose to use an anthology structure for the series?
Chayko: It was really important to me that we didn’t do an anthology where people would pick and choose [episodes]. I really wanted to make something that was an immersive experience you would start at the beginning and follow all the way through. A couple of things allowed us to do that. One of them was that the fires themselves became the narrative device that pulled you through the story, so even though we go with a different community and a different set of characters in each story, he fires themselves and the growing scope of them are actually pulling the audience through the six episodes. We also have our recurring characters, young firefighters played by Hunter [Page-Lochard] and Eliza [Scanlen], so there are a couple of serialised elements.
We curated the series as well in a way we felt showed the entire experience of having lived through the fires – not just fighting a fire or being in the middle of a fire but all of those moments along the way, like having to make that initial decision about whether to stay and try to defend your home or whether to leave, what it was like to be on the road when you’re evacuating and trapped in amongst hundreds of thousands of cars and other people fleeing, what it was like to be in an evacuation centre, what it was like to be in the middle of a fire and also in terms of the aftermath. That was another way we tried to create an overall experience in the six episodes. That became the frame within which we chose our stories, which we drew from real stories most of the time.
We didn’t want to exactly tell those people’s stories, because if you are telling someone’s story you have to be very authentic to that story or not [tell it] at all. We knew we did need to have that scope to be dramatic within this because it’s a drama we’re making, so we pulled from a lot of narratives we got in the research.

Eliza and Hunter, tell us about your characters and how they interact with each other.
Scanlen: Tash and Mott are both part of this fire brigade and my character, Tash, has been in the brigade for five years, so she’s very experienced. For her to be there for so long, it’s not just about the physical challenge of fighting fires but the community she is surrounded by when she goes on to the fire ground every day or every time she’s required.
What I found so special about this series was it’s not sensational. It’s not just about firefighters running out and being heroes. It’s observing how such an unprecedented version of the fires interacted with the lives of normal people and how they picked up the pieces after such a traumatic few months. As an actor, it was just really fulfilling to have that back story and see how it interacted with this fire character and how it caused so much friction in her life, this added pressure.

Page-Lochard: Mott is a little more jovial with situations, trying to make them lighter. When the fires come along, he’s facing a beast he can’t just joke about. He is someone who’s always moving around, he’s never really stable, and he finds that stabilisation within Tash, and then it’s jeopardised again with the fire.
We really wanted to tell this story authentically and give it the respect it needs and we did that from day one, just asking more questions than usual because this is a responsibility everyone on the show [shares], whether it’s Eliza and myself or the people coming in for each episode. We’ve all got massive responsibility because this isn’t about us, it’s about them, it’s about Australia, it’s about everyone else.

How did you choose the stories featured in the series and decide which communities to focus on?
Chayko: Part of it was determined by the fact we wanted to follow the advancement and the increasing volume of the fires as the months went on. There were particular stories that stood out to us and that we felt represented experiences. There was a story about a woman who was left alone, for example, without any communications during the night and not knowing whether the fires were just outside the door or not. That really spoke to us about a different experience of fire, not necessarily being in the middle of fire but about the fear of the unknown and how debilitating that was. We drew on stories of firefighters and on farmers. We just wanted to represent as wide a view of experiences and people as we could and that was one of the things that helped.

Ayres: The main thing I noticed when reading all these stories was there wasn’t that Hollywood glorified hero’s journey, not just with Tash and Mott but with everyone that we came into contact with. It was very real and guttural and hopeless at times. There are times where we lose and characters lose and to show that and those struggles was very important. Something the firefighters also said when we were training with them was, ‘Don’t make us look like a hero.’
One of the things that really struck us as the appropriate way to tell this story was there are recurring horror tropes throughout the series – realist horror, not shock horror. The unseen horror was a recurring motif we used across the entire series, this feeling that something terrible is about to happen at any moment. That’s true, because that’s how we lived that summer. People were waiting for something terrible to happen at any moment.

Scanlen: Reading the script for the first time, that’s why it was so harrowing to read because unlike reading a horror, you couldn’t remove yourself from the script and sigh with relief and say, ‘That’s not real.’ It all happened and it’s going to continue to get worse. That’s why it was so important to tell this story.

How does the series refer to the wider global climate emergency?
Ayres: For me, it’s the subtext throughout the entire series. The drama works by persuading people [about climate issues] rather than dictating to people, so what we tried to do is show the experiences that can come from the climate emergency that people are forced into.
One thing the series does which I’m incredibly proud of is give a voice to a whole sector who are at the forefront of this suffering and who are normally quite voiceless. Poor, rural Australians are very underrepresented on our screens and, hopefully, through our series we will feel empathy for their experiences and that will also persuade people this is something we need to deal with right now.

Chayko: What we’re excited by is that the series will restart a really important dialogue we were having just after the fires and one we got distracted from with Covid. But we’re really hoping the series itself will absolutely bring that back to the forefront and we can start looking really closely and really hard at some pretty urgent needs right now.

Scanlen: I saw Tash and Mott as representative of the younger generation that will not only be severely affected by ‘business as usual’ in the future, but they also represent the headstrong, steadfast young people in our society that are willing the government to change their policies and introduce more sustainable practices. As an actor, I don’t think we’re often given those opportunities to contribute to social justice in such an active way. I hope that really is clear for audiences.