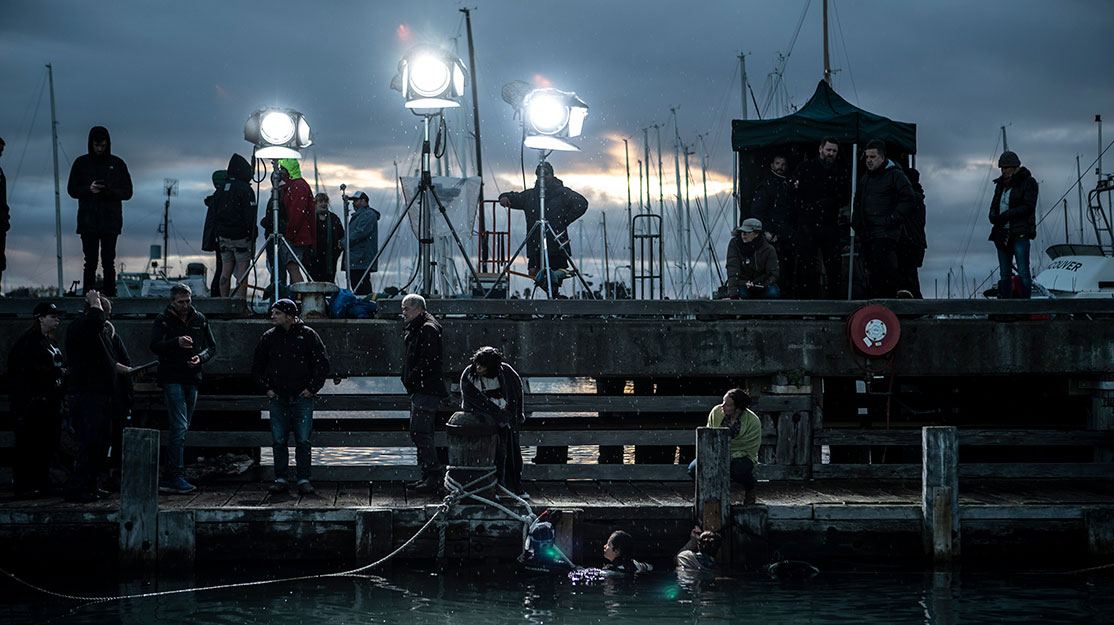 Matchbox Pictures’ ‘genre-bending’ four-parter Hungry Ghosts breaks new ground with a story set among a Vietnamese-Australian community where the trauma of the Vietnam War is reawakened in the form of ghosts.

Timothy Hobart, a development producer/writer at NBCUniversal’s Australian production company Matchbox Pictures, was reading an article in a science journal about inherited trauma when he had a light-bulb moment.

The account of how some people are just as likely to inherit their grandfather’s trauma as the colour of his eyes chimed with a recent conversation he’d had with Sue Masters, head of drama at Australia’s multicultural broadcaster SBS. Masters had expressed interest in a drama set in the large Australian-Vietnamese community with a supernatural element. Hobart started thinking about the connection between inherited trauma and ghosts, a key element of Vietnamese culture that is celebrated each year during the Hungry Ghost Festival in Melbourne and Hong Kong.

Hobart pitched his idea, which would draw on the Vietnam War and the exodus of Vietnamese to Australia after the fall of Saigon in 1975, to Masters. She loved the concept so he brought in writer John Ridley as co-creator to develop the project up to the Bible stage with SBS funding.

The supernatural drama explores three generations of Vietnamese-Australian families, all haunted by the traumatic events of war, and opens on the eve of the Hungry Ghost Festival when a vengeful spirit is unleashed, bringing the dead with him. As the ghosts wreak havoc, reclaiming lost loves and repaying old grudges, a young woman who’s never taken responsibility for who she could be must finally step up and accept her destiny.

To ensure authenticity, the producers made unconventional choices in the writing team, hiring playwright Michele Lee, a Hmong woman, and brothers Alan and Jeremy Nguyen, who had no screen credits. Masters recommended the Nguyens after meeting them at an emerging writers workshop. Hobart wrote the first episode and co-wrote the second with the Nguyens, while Ridley penned the third and co-wrote the fourth with Lee, who was hired after one of the original writers, playwright and novelist Hoa Pham, had to drop out.

“One of the first ideas I had was that I would facilitate this project and possibly not even write it,” Hobart says. “We searched the country wide and far but the pool of the Vietnamese-Australian writers in TV is very small. Alan and Jeremy were fabulous. They interrogated every idea and held us accountable to make sure the story is authentic.”

Hobart was writing three episodes of Foxtel’s prison drama Wentworth when he first met Ridley, who was an in-house writer on the show, and they later collaborated on the Matchbox Pictures/Seven Network crime drama Wanted.

“John is extraordinary when it comes to plotting,” Hobart says. “I felt very comfortable with the emotional heart of the story but we wanted to make sure the plot was true to the horror genre, and there is no one other than John I would turn to to help flesh that out.”

Corvini continues: “John has done a lot of commercial drama but he had not been given the opportunity to write something at this level. He has a great story brain and he delivered great work.”

Corvini, who produced the miniseries Safe Harbour and Better Man for SBS, had long wanted to work with Seet. When offered the gig, the director, whose father is Chinese/Malaysian, responded: “Hallelujah. I didn’t think I would ever get the chance to do something like this. As well as being an Asian story, it combines horror, thriller, romance, humour and an old-fashioned ghost story, and we’ve never seen a lot of those characters before. It has an authentic voice; it isn’t an outsider-looking-in experience.”

Bryan Brown stars as Neil Stockton, a photographer famous for his collection of Vietnam War photographs, which are featured in an exhibition that causes consternation in the community. Aussie Clare Bowen, who was a regular in all six seasons of Nashville, which aired on the US ABC network before moving to CMT, plays his daughter Liz.

A big fan of Nashville, Corvini wanted to cast Bowen in Safe Harbour but she wasn’t available. “She is one of those people where we need to remind Australians that she is Australian,” he says. “She and Bryan make a magnificent father and daughter. Bryan plays a Hemingway-esque character who has a lot of regrets about being an absent father and tries to do something about them, but it is too late.”

Casting initially proved challenging due to the limited number of Vietnamese-Australian and Chinese-Australian actors, so casting directors Leigh Pickford and Marianne Jade looked far and wide via mass call-outs, appeals via SBS Radio and posting flyers in Vietnamese-populated suburbs.

In her first major TV role, experienced stage actress Catherine Văn-Davies is May Le, a self-made woman whose world is crumbling as she is deeply in debt and has lost her business and her long-time partner. “She was one of the first to audition and she knocked it out of the park,” Hobart says.

Văn-Davies’ Vietnamese mother fled Vietnam by boat in 1978 (her father is Anglo-Australian), so the subject resonated with the Canberra-born actor. “May Le is the unsuspecting hero of her storyline. When she is thrust into this series of events, she has to step up. She realises she has a great lineage and she reconnects with her predecessors,” Văn-Davies says.

Transgender woman Suzy Wrong, a Singapore-born, Sydney-based theatre critic, took the role of Roxy, a trans woman and gifted clairvoyant who is May’s best friend, in just her second TV role (the first coming in an episode of pubcaster ABC’s legal drama Crownies in 2011).

“I play probably the first trans character you will see on TV who does not have to explain herself, does not tell you her sob story and is living her very best life. Hopefully she will be a joyful change for queer viewers everywhere,” says Wrong. “Roxy and May are very close; they have almost a Mulder and Scully [The X-Files] relationship. Unlike trans people who are mostly negatively portrayed, Roxy is vibrant, funny and exuberant. She’s a clairvoyant who suddenly meets ghosts and she could not be happier.”

Văn-Davies, who had been a guest on Wrong’s podcast, suggested her to the casting directors. Pickford gave her an outline of the character and asked her to meet with Seet. After chatting for half an hour, he asked her to audition – and although she hadn’t read the script, she did a cold read and nailed the part.

“When I first looked at the Roxy character, I thought, ‘There is no way we are going to cast this,’” Seet says. “She is Vietnamese, trans and she has to be charismatic. When I met with Suzy, I knew she was 100% right for the role.”

Rising star Jillian Nguyen made her screen debut in Justin Kurzel’s bushranger movie True History of the Kelly Gang last year after graduating from the 16th Street Actors Studio in Melbourne. She plays Sophie Tran, the daughter of Vietnamese immigrants, who is studying biomedicine and gets possessed by evil spirits.

That background parallels Nguyen’s own experience. She was born in a refugee camp in Malaysia, where her Vietnamese parents spent five years, and moved to Australia when she was 14 months old. She set her sights on acting when she was only seven, after watching James Cameron’s Titanic 20 times.

Nguyen was in Sydney last November appearing in Daniel Keene’s play The Serpent’s Teeth when her cousin, who runs a Facebook group for Vietnamese Australians, told her she had received a message from Pickford asking for recommendations for actors. She saw Pickford but did not land the role until March.

Sophie treads a fine line between inherited trauma and mental illness. On Nguyen’s first day on set, her character was the subject of an exorcism by a real-life Buddhist monk. “It was thrilling. I’d never seen a female character doing anything like this on Australian television,” the actor says. “She has so much fun, including an underwater scene where she tries to kill her mother. I think the show will really challenge the way people see Asian women and, in particular, Vietnamese women.”

The cast also includes Ryan Corr as a first-year doctor who encounters May, Gary Sweet as a shape-shifter and Susie Porter as a UN worker who is infected by ghosts. Two 82-year-olds, Laurence Mah and Linda Hsia, play a Buddhist monk and the family’s matriarch respectively. One cast member, Ferdinand Hoang, also served as the dialect coach.

Seet collaborated with his long-time DOP Bruce Young on the seven-week shoot in Melbourne and Queensland’s Gold Coast. The ghosts are not wraith-like but are in human form, enhanced with make-up to convey the trauma they bear and what Seet calls “tricks in camera.”

The result – debuting tonight and airing across four consecutive evenings – is unlike anything ever produced before in Australia. Masters acknowledges it was a gamble for SBS, but observes: “Everything we do is a risk, but Hungry Ghosts is in very strong hands. We want to be dangerous. It has five compelling, engaging stories and it subverts stereotypes.”

Masters, whose exec producer credits at SBS include The Hunting, On the Ropes, Safe Harbour, Sunshine and Deep Water, notes: “I think it’s the most out-there thing I’ve ever done.”

Corvini adds: “This is a genre-bending series that celebrates diversity and shakes up stereotypes. It’s an extraordinary opportunity to show, for instance, a transgender woman without going into why she is transgender. It’s full of powerful and really dramatic passions, and it’s a very elegant piece of television.”