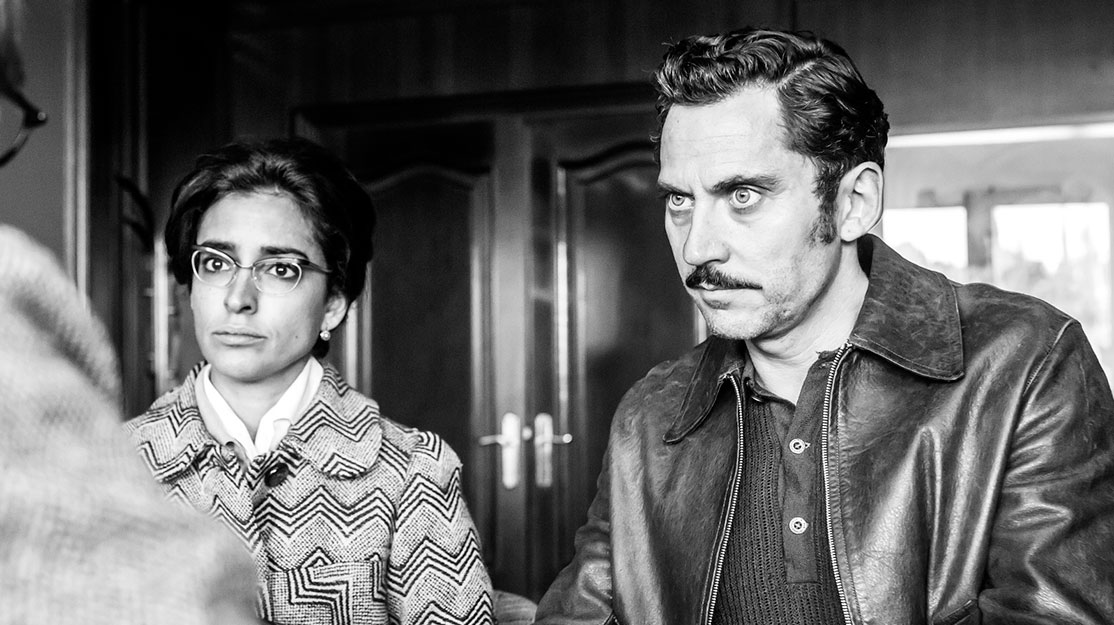 Spanish series Arde Madrid imagines the relationship between Hollywood star Ava Gardner and Argentine dictator Juan Perón, as revealed through the eyes of a maid and a chauffeur. DQ meets writers and directors Paco León and Anna R Costa.

In television drama, sometimes perspective is everything, whether you follow the story through the eyes of the lead characters or take in the viewpoints of an ensemble of people each witnessing or experiencing the same, often life-shattering event.

But in the case of Spanish drama Arde Madrid, that perspective comes from a particularly unusual source.

Set in early 1960s Madrid, when the country was in the grip of General Franco’s dictatorship, the series focuses on the real-life friendship between Hollywood movie star Ava Gardner and Juan Perón, the Argentine dictator-in-exile, who each had a home in the same apartment building. However, the story unfolds from the view of Gardner’s maid and chauffeur.

Ana Mari (played by Inma Cuesta) is a loyal, conservative soul who teaches young ladies how to be good housewives and mothers. So when she is asked to work as a maid for Ava Gardner to spy on her for the government, she doesn’t think twice.

However, to complete the task, she and Ava’s chauffeur Manolo (Paco León) have to pose as husband and wife – a job made more difficult by the fact Monolo is her complete opposite.

So begins Ana Mari’s education on the life of a Hollywood megastar, whether it is her all-night parties that rob neighbour Perón of his sleep or bringing a drunk Ava back to life after late nights dancing at Madrid’s hippest nightclubs. And in all the turmoil, Ana Mari barely notices she is beginning to fall for Manolo.

The eight-part half-hour drama comes from writing team León and Anna R Costa, who began to develop the story after hearing an anecdote about how Gardner shared a stormy, tempestuous relationship with her neighbour Perón.

“The lead roles are fictitious but the nucleus of the series is historical fact,” Costa says, before León continues: “We wanted to be very clear that we weren’t making a biopic. Quite the opposite – we wanted the point of view of the servants. Everything is experienced through their eyes.”

It’s a decision that means Gardner, portrayed by Debi Mazar, doesn’t feature too heavily in the series, instead mainly appearing through her interaction with Ana Mari and Manolo.

León and Costa wrote and directed the series, while León’s on-screen role added an extra layer to his involvement. He took the lead behind the camera, while Costa carried the weight of the writing process.

“It was complicated,” he admits. “I’ve directed and acted before so to have to do this together as a couple was a new, challenging experience. We both agreed that if I had done this alone, it could have been done but it wouldn’t have been as good.

“As directors, we talk about what is written all the time and it goes back and forth. It’s true there are moments when you have to compromise but also when we have the same thoughts. They’re great moments to have.”

The most watched series on Movistar+ in 2018 following its release last November, the series balances drama and comedy, which comes naturally to León, an actor known for comedy roles before stepping into dramas La Peste (The Plague) and La Casa de las Flores (The House of Flowers).

“It comes naturally to me, as a comedian, that comedy is the genre is the way of combining all other genres the series has – thriller, drama, historical,” he says. “The perfect way is to use comedy to combine all of that.”

The comedic sensibilities of the series are heightened by the fact it was shot in black and white. “In the beginning, it was a little complicated and we had a couple of discussions to convince everyone,” León says. “The arguments was that it was suitable for the time because we have memories of photographs and films of that period, so you’re immediately catapulted into those times.

“There are so many series around now, we thought it was best to set ourselves apart with black and white. It facilitated things like wardrobe choices greatly. It’s a class aspect, a time aspect. Obviously, the budget for makeup and wardrobe was tight, and when you have 200 people on set, it helped enormously with that.”

Costa continues: “The colour adds to confusion when you have mass scenes with a lot of people like in the last episode, where there’s a flamenco dancing scene. It’s one take for two-and-a-half minutes like a [Goodfellas director Martin] Scorsese walkthrough. You learn to visualise the set in black and white, knowing how it will turn out.”

The unusual story and its fresh perspective, blend of humour and drama and unusual visual palette helped attract the interest of Spanish pay TV platform Movistar+, which commissioned and produced the series. Beta Films handles international sales, while the show also screened at Berlinale earlier this year.

“It’s unique and original,” says Domingo Corral, head of original fiction at Movistar+. “Telling the story from the point of view of the servants was something that made the proposal very original. When we approach a story, we want to see a way to tell it that hasn’t been told before. That’s one of the key things when we choose a project.

“In this world where there are so many shows, when you find something that stands out, that helps a lot. It has a lot of pace and rhythm, it goes very quickly and, at the same time, people can trace the characters and the context of the period. Another thing that’s important is it’s not just a show, it’s also a brand and an experience. If you weren’t watching and experiencing it, you were missing something, and these factors all contributed to making the show a success.”