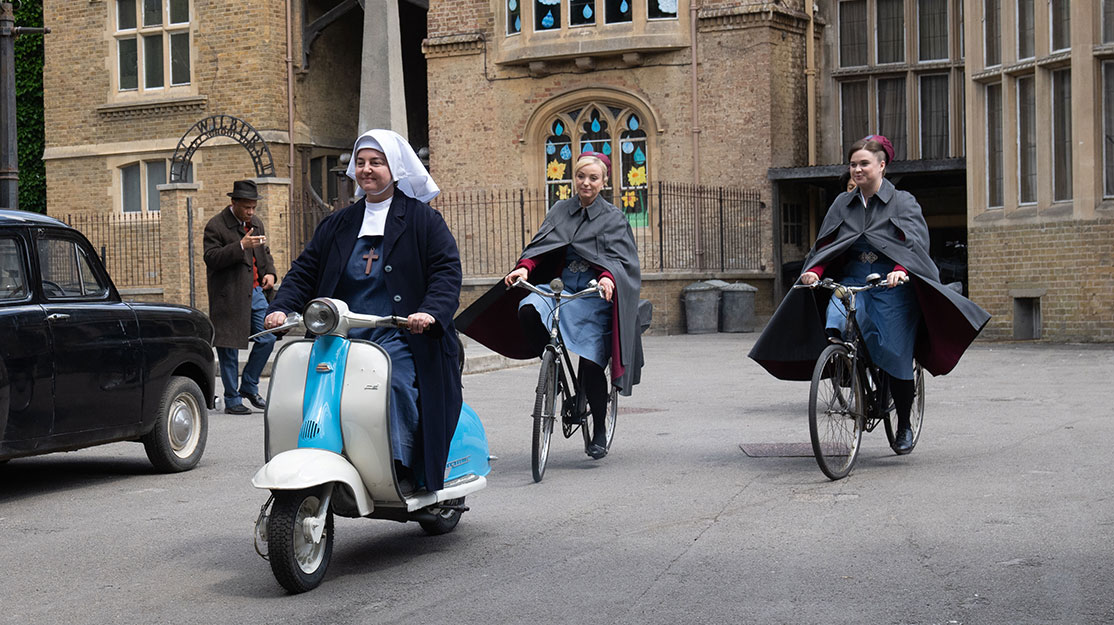 Now in its 12th season, Call the Midwife is assured of its status as one of the BBC’s best-loved series. The cast reveal how its focus on social change and relatable issues means it’s more than just a medical drama.

When the BBC first commissioned Call the Midwife, it didn’t really know what to do with it. Nostalgia and nuns mixed with the grind of poverty, death merging with birth – Sunday night at 20.00 didn’t seem the most obvious place for this kind of show. But almost from the word go, it took on a life of its own.

The series, created and written by Heidi Thomas and originally based on the memoirs of Jennifer Worth, recently started its 12th season, following on from a Christmas special that was, as usual, one of the most viewed dramas on British television during the holiday season.

Featuring disability and alcoholism, poverty and sickness, lightened only by the engagement of favourite character Nurse Trixie Franklin (Helen George), this was Call the Midwife in all its glory – because ups and downs are part of life.

It is no wonder that articles have been written about how Call the Midwife sneaks in politics. It has a Christian outlook – the story centres on an order of medical nuns – and kindness and community are at its heart. But it has always been unsparing about dealing with issues that could be deemed political, such as the danger of illegal abortions and the stigma of single parenthood.

It chronicles social change – one of the real joys of the series – and it is unashamedly feminist too, even if the word was barely used in 1957, the year in which its story begins. Every year, at the launch of the Christmas episode, Thomas enjoys mentioning the word vagina, so long verboten on television, even if half the world has one. It is strange how revolutionary this still feels.

That feminist feel is there both in front of and behind the camera. With an almost entirely female-led cast and female-centred storylines, it is produced and almost always directed by women.

“I just love the frankness of talking about women’s health and women’s issues,” says Laura Main, who plays cast regular Shelagh Turner, who started the show as a nun before falling in love with the resident doctor Patrick Turner. “I’ll never ever forget the scene where a woman didn’t have the language to talk about her prolapsed uterus and how she was dealing with that. It just absolutely shocked me to the core.

“I think we still need to be reminded or encouraged, because it can be a scary thing just going for your smear test. To have these things aired on a Sunday night at 20.00 is important. We cover men’s health issues too. I don’t think one person could watch Call the Midwife and not relate to it or be educated, and that’s brilliant.”

From the start of the 12th season, once again produced by Neal Street Productions, Call the Midwife has continued with that ethos. The Christmas episode featured the return of Susan, a baby affected by the use of thalidomide, who viewers first met in season five, and again in season six. We saw her parents rowing about compensation money – incredibly an issue that is still ongoing to this day – and her father turn to drink because he felt unable to provide for his little girl.

“It was a reminder that the issue of thalidomide wasn’t just a one-off story; it wasn’t just about babies being born,” says Stephen McGann, who plays Dr Patrick Turner. “People who were affected by this scandal are still with us today, as are the problems and challenges for them and their families.

“The Susan we meet is growing up and she wants what the other kids have. She is a lively, vibrant child but has challenges socially because she isn’t treated the way she should be. We also see the strain it is has put on the whole family.”

Meanwhile, the first episode of season 12 proper – which launched on New Year’s Day – dramatised and personalised one of the most controversial moments in British history, when Conservative MP Enoch Powell made a racist speech about immigration in which he said: “As I look ahead, I am filled with foreboding; like the Roman, I seem to see the River Tiber foaming with much blood.”

Even many British viewers will be unaware of the fact that, after the speech led to Powell’s dismissal from the shadow cabinet, London dockers went on strike in support of him, bearing placards saying, ‘Don’t knock Enoch.’

For older cast members, creating the scene was a reminder of a dark time and a warning. “When you hear the speech again, it’s shocking,” says Jenny Agutter, who plays Sister Julienne. “It was a terrible time and, when there is a terrible economic climate, this happens. That’s why Hitler came to power. People get frightened and they have to find the whipping boy.”

It was a shock too for younger cast members such as Zephryn Taitte. His character is Cyril Robinson, a black engineer who is married to midwife Lucille and gets caught up in the demonstrations.

“I am so glad they put this storyline in, as it’s something that needs to be spoken about,” says Taitte. “For Cyril, it is a shock; he has never encountered this level of animosity towards immigrants or migrants. It’s a shock because you suddenly realise there is a ton of people who actually think like that. It’s a slap in the face of reality and it’s one that’s still going on. It’s an issue that people still need to address, to be open and honest about.

“Toleration has come to the forefront again in our time. You see how it affects Lucille and Cyril, and that is important.”

Over this season, set in 1968, we see how the pair are also struggling after Lucille’s miscarriage, another example of Call the Midwife’s unstinting look at life as a woman. Other issues tackled include domestic violence, vaccines, infection and, of course, many more pregnancies.

“I think one of the interesting things is seeing how people were treated then and now,” says McGann. “There is quite a tragic mental health story because Dr Turner knows someone needs to be saved, but the things to help – which are now available – weren’t there then. Just like so much of Call the Midwife, this is a big dose of social reality.”