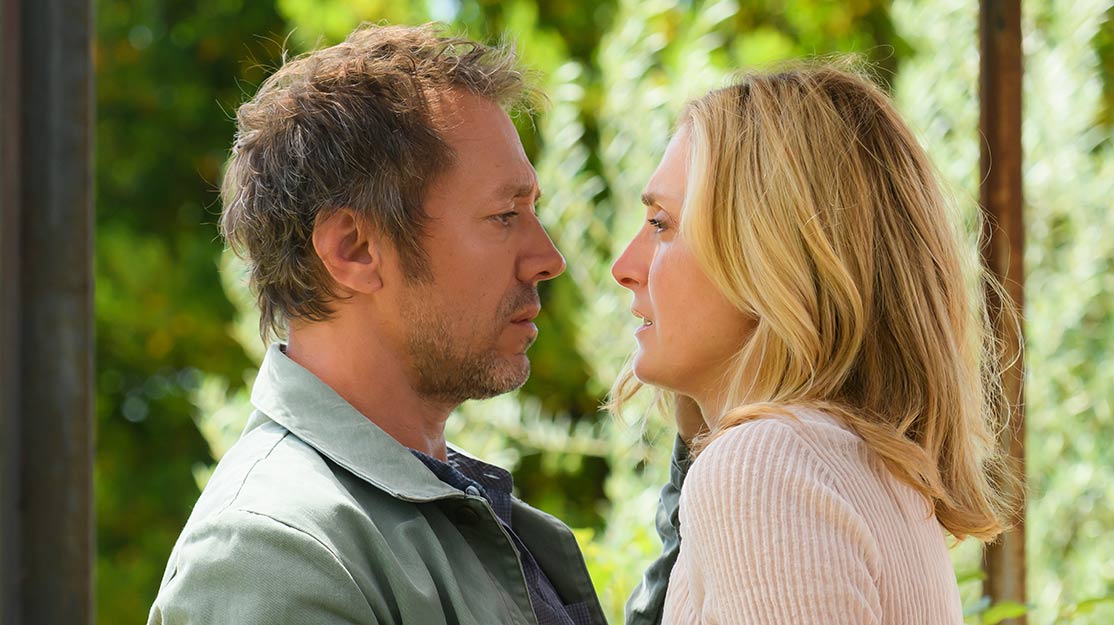 In French drama Soupçons (Torn), childhood sweethearts rekindle their love — but at what cost to their families? Co-writer and director Lionel Bailliu tells DQ about the romantic thriller.

A story of forbidden love, French drama Soupçons follows Victoire as she moves to south-east France with her family. In the small village where she now lives, she meets Florent, her childhood love, and they soon give in to their feelings for each other.

Both married with children, their situation becomes increasingly complicated. But just as they are about to leave their respective partners, Florent’s wife suddenly disappears.

Created and written by Lionel Bailliu and Yann Le Gal, the idea for the six-part drama actually originated from a previous series penned by the duo, 2016 drama Innocente, which focuses on a woman who wakes up next to a dead body and must fight to clear her name when she is suspected of murder.

“That show was not our idea and we had to write it in a hurry; it was very difficult,” Bailliu tells DQ. “The producer had a desire to develop a romance in the story but we couldn’t because there wasn’t enough room to do that. So once Innocente was finished, we thought, ‘Next time we will do a thriller that is mixed with a romance.’

“That was the beginning of Soupçons. We have tried to move the story forward so the viewer must wonder what has happened and who is behind the disappearance and, at the same time, is Victoire going to go with her lover or her husband, and what are they hiding?”

Soupçons has been a long time coming, taking two-and-a-half years to bring to the screen. Bailliu and Le Gal both created and wrote the series, with Bailliu also directing. From the outset, balancing the romance and thriller elements, while also ensuring the storyline stayed true to the characters involved, proved to be the biggest challenge for the writers.

“We had the right setup to mix them together, so it was a good situation from the start,” Bailliu says. Speaking at French event Series Mania, where Soupçons had its world premiere earlier this year, he continues: “There were some situations that were complex psychologically, such as in the second episode when Florent’s wife has disappeared and he worries for her but, at the same time, he is in love with Victoire, so there are conflicting emotions like this. We had to try to find the right note and not be too melodramatic so it looks realistic. That was the difficult part.”

Episode one, he says, starts with a film noir style that leaves viewers intrigued by the blossoming romance between Victoire and Florent, with some foreboding notes that their path to love will not be smooth. This was aimed at helping viewers to become familiar with the characters and building the tension surrounding the central duo’s secretive relationship, rather than simply jumping straight into the thriller aspect concerning the disappearance of Florent’s wife.

“We took our time because the main focus of our story is not really the crime, it’s more about the effect of all this on our characters. The beginning of the story is the romance between Victoire and Florent and the affair. We tried to be as organic to the story as possible,” Bailliu explains.

Despite never having worked together before Innocente, Bailliu and Le Gan quickly established a close, complementary writing partnership. “We discuss things a lot in a café in Paris. It’s very nice!” Bailliu jokes, adding that they write separately before exchanging ideas and scripts.

Once in the director’s chair, Bailliu takes time to rehearse with the actors to work out what a scene looks like and how the camera can best capture it. “I don’t want to compromise on the acting,” he says. “Even if I don’t have all the shots I dreamed of, the acting must be good because that’s essential to the film. But I also like to storyboard my shots. I know where I’m going and how I’m going to edit it. It can be different in the end, but the main focus is to have the best acting possible.”

The cast is led by Julie Gayet as Victoire, who stars opposite Bruno Debrandt as Florent. Gayet is a “very elegant woman and is perfect in the role of a woman in love,” Bailliu says. “There’s something romantic about her. And because Victoire is having an affair, we needed somebody who the viewers would follow even though it’s bad to have an affair. With her, I think we are with her.”

Debrandt, as Florent, is “pretty intense,” the writer continues, and is a perfect contrast to Thomas Jouannet, who plays Victoire’s husband. “Both are very charming, but in a very different way. So I think it works well. They are very good actors and it’s very nice to work with them.”

Produced by Elephant and AT-Productions for France 3 and Belgium’s RTBF, filming took place last summer, mostly on location in the south-eastern region of Provence, where a punishing schedule pushed the crew to the limit in temperatures of up to 40°C. Federation Entertainment is handling international distribution.

“We had to make 20 shots a day; that’s a lot. So you have to know exactly where you’re going,” Bailliu says. “We have a lot of children in the show and a limited amount of time to work with them, four hours a day, so it’s very difficult on the shooting schedule to plan working with children. And it was very hot, so that was hard. There were many challenges.”

What stands out about Soupçon, known internationally as Torn, is its treatment of the central mystery and the fact its focus never strays too far from the central relationships. “Our focus is not on the police work, it is on the characters. So I think that is our originality,” Bailliu explains. “We begin with the love story. We took our time to discover the characters and we try to avoid making everything over the top. We try to stay realistic and  to explore the complex situations and emotions. That’s what’s interesting. It’s almost as if we didn’t have a ‘B’ plot. We stayed very focused on this love triangle between these three characters and the effect of what is happening on their families.”

The show promises to serve up plenty of twists and turns as viewers follow the fallout from Victoire and Florent’s affair and its implications on their families, not to mention the disappearance of Florent’s wife.

“In the end, with his kind of story, you twist a lot of things,” Bailliu notes. “Even if you have an idea but it doesn’t work, you never reject it. You just use it in a different way so you have some red herrings. But we always knew where we were going.”

He adds: “I think there are many surprises in Soupçons. Even if you guess some things, you can’t guess everything.”