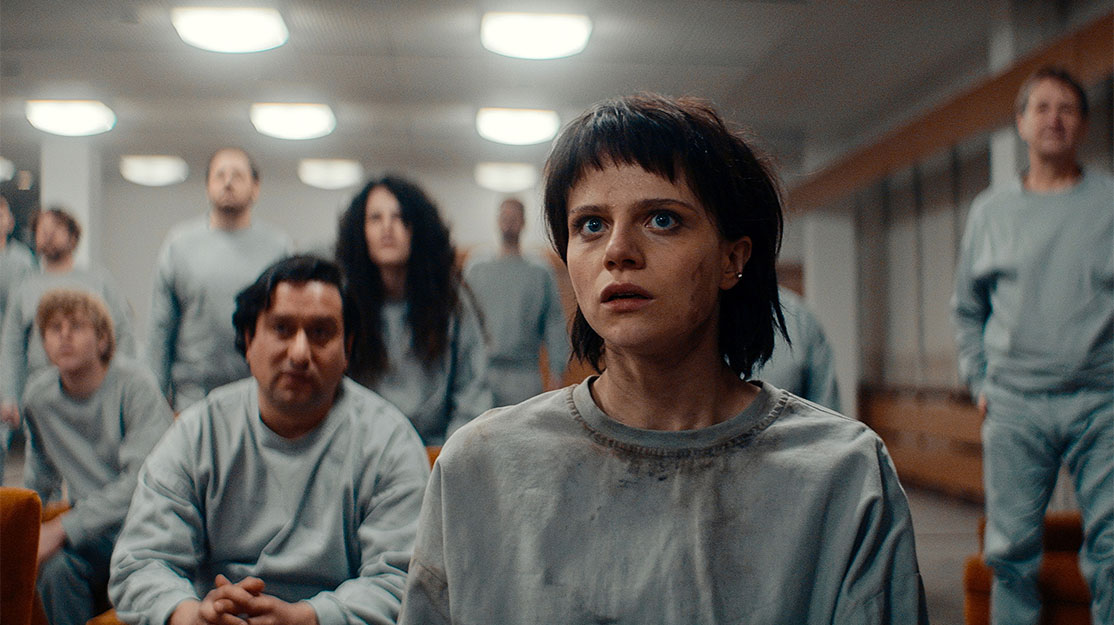 German drama Souls dives into the question of whether people can remember past lives through three interconnected stories set across Europe.

In Stockholm, pregnant pathologist Allie tries everything to prevent her beloved husband Leo, a pilot, from flying. In Berlin, 25-year-old Linn joins a cult whose members, for a variety of reasons, desperately want to believe in life after death. Meanwhile, in a hospital in the middle of Germany, Hanna wakes up after a serious car accident and wonders how her 14-year-old son, Jacob, managed to save them both from drowning.

A few days after the accident, Jacob suddenly claims to remember a past life as a pilot of a missing passenger plane and dramatically changes the fate of the three women. Is he telling the truth?

Produced by Geißendörfer Pictures in association with Sky Studios, the series comes from writer and director Alex Eslam, who co-directed with Hanna Maria Heidrich.

Eslam wrote the series with Lisa van Brakel, Erol Yesilkaya and Senad Halilbasic, based on an idea by Malte Can. Can, Hana Geißendörfer, Lucia Vogdt, Frank Jastfelder and Marcus Ammon are executive producers and Alena Jelinek is the co-executive producer.

NBCUniversal Global Distribution is handling international sales of the series, which debuts on Sky in Germany on November 8 and will also be available in the UK, Ireland, Italy, Austria and Switzerland.

The show had its premiere at French television festival Canneseries earlier this year – winning best screenplay and best music – where husband-and-wife team Eslam and Heidrich spoke to DQ about its high-concept premise, setting the story across multiple timelines and questioning the unbelievable.

How has the journey been to bring Souls to the screen?
Alex Eslam: It was a really long ride. It was in the making for over four years, we were developing a lot and we knew the complexity of the story takes time. We were glad Sky gave us the time and the creative freedom we needed. Then Covid hit and shooting came with all the restrictions, like everyone else. But it was a blast to shoot – I was thankful every day just to be there.

Hanna Maria Heidrich: The pandemic meant the shoot was postponed so there was the opportunity to do another round of the scripts. Alex took full advantage of it. Nevertheless, we went into the shoot in full lockdown in Berlin and it was quite a stunt.

Souls has quite a high-concept story. Where did the premise come from?
Eslam: I didn’t want to make a spiritualised show. The whole concept, for me, is about believing or disbelieving. People believe in the afterlife or not, so how can I make this a theme through humanity? How do we blend normal conflicts with situations where you think, ‘Is there something after or is there nothing?’ If there’s a mother and her son, or a couple, what happens when one of them dies? It was just about taking normal conflicts and confronting them with this big theme.

Heidrich: Malte Can saw a documentary about kids in Turkey saying they’d lived before, so he approached Alex with that idea, to ask if there was something he could do with it. We had the chance to meet someone from the documentary, who, as a boy, remembered his own death and meeting his own children as 17-year-olds – much older than he was. So it’s a topic that exists for real.

Eslam: The interesting thing is he tells you the story and you don’t know if he’s inventing it, so do you believe him or not? Each individual believes something else. I found it very fascinating, that people either believe it or they do not. It depends on you as a person, thinking, ‘Is he telling the truth or not?’ With this boy now a young man, maybe it’s truth or maybe not.

Heidrich: That’s what I find so fascinating about Souls, this question of is there room in society where we can accept things we can’t explain. This is what happens with Jacob in the story. The mother doesn’t know. What he claims is unexplainable, there’s no logic to it. Can we accept that or give room to it? How do we deal with that? Is there any room for wonders or miracles?

The concept is rooted in real life. How did you find the way to tell the story?
Eslam: The topic, for me, was too big. It was tough to find the starting point and let it flow. Of course, there’s the boy. It’s important to find this conflict of is he lying or isn’t he? I wanted the mother to be a reflection of the viewer, and then love is always a topic – if two souls get separated, is there something afterwards that glues you together? That was another story. Each individual element has something to do with the other one, so I had different topics in mind – close family, love and broader family in the future – where I thought this had to be combined. To weave everything together was then the big task and that’s why we needed development time, which Sky gave us.

What was the writing process on the show?
Eslam: I always knew how the story was going to go. I knew the points – how it starts, the mid-point, how it ended. It wasn’t developed with a writers’ room like in the US, but I had collaborators like Liza, Erol and Senad, really gifted and good collaborators. We met once every few weeks for five days to talk about the broad concepts and the eight episodes. Then I went home and wrote each episode with someone else. We had to break down the episodes while we were writing the real scenes, which was a nightmare, just like hitting a brick wall with our heads until the brick wall gave in. It was a tough process but I knew where I wanted to go.

How did you balance writing and directing duties?
Heidrich: Alex had split his brain right from the start in this regard. He created it all, so it came very naturally to him. We’re married, so it was a blessing that I was very much involved from the very beginning, which was fantastic because I was so in love with the characters. Every show wants to be character-driven and so many shows now want to have complex female characters, but with Souls, there are really three leads – they’re fantastic, three-dimensional female characters. I really fell in love with them. Allie in the past, she’s so different; I haven’t seen someone like her before. That really comes across in the pilot, her naughtiness, her attitudes, but at the same time she still moves me to tears. I was so moved by her love story. That’s something that’s relatable, the fact she can’t get over the loss of the love of her life. It’s heartbreaking. The way Julia interpreted that, she put so much of herself and so much of her hurt into that role, and it really comes across.

How did you work together to shoot the series?
Eslam: The whole visual concept was based on somehow fitting the three different timelines together. We know the budget restrictions but still we wanted to make it cinematic, like it was shot on film. When I write, I’m first and foremost a director and then a writer, so I always think in the scene and write what it looks like, so it was very much in my head what the visual style should be. In terms of camera style, I always felt we needed to have something grounded. There are a lot of dolly shots and not too much handheld for the sophisticated way we wanted to tell that story.

Heidrich: The big blessing was we worked with a DOP [Carlo Jelevic] as well as production designers Jurek Kuttner and Jill Schwarzer, who we first started with, so it felt like we were making this with our friends. That allowed us to meet early on together to talk and have a collaborative vision. In the beginning, there was also a conversation about the look with the different timelines. We hadn’t made a big series before and this team studied together at the Filmakademie Baden-Wuerttemberg in Ludwigsburg. We came together more or less as friends and we really had the time to develop it. That’s why everything could breathe.

Souls was filmed across Berlin. Was it a challenging shoot?
Eslam: For us [as directors] it was always important to say that we each had our own episodes. Sometimes we would be in a location, I would do scenes from my episodes and Hanna would do hers. Also, we had to be clear about what each episode was about. Each episode is almost like a little film on its own, so it was really clear to us to separate them and then everyone makes their own film, so it fits together at the end.

Heidrich: Because it’s a show that’s so interwoven with these three different timelines, it really develops and progresses over each episode. It has this feeling of pulling you in more and more.