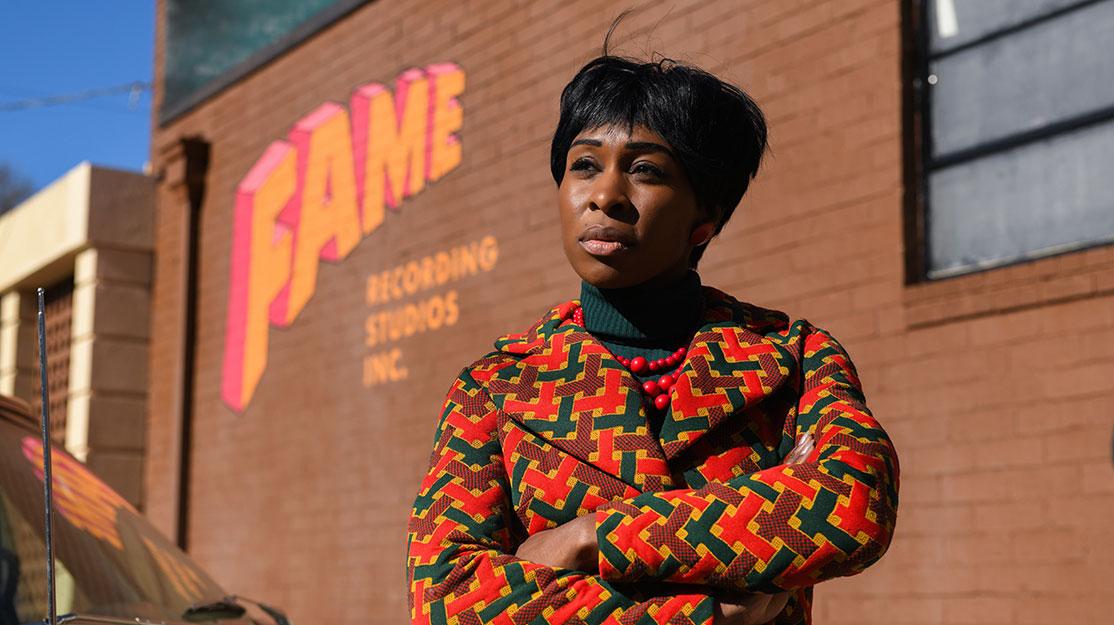 If you’re bringing the story of a genius to the small screen, who better to tell it than another genius? Pulitzer Prize-winning playwright, screenwriter, musician and author Suzan-Lori Parks won the MacArthur Foundation ‘Genius’ Grant in 2001. Eighteen years later, TV and film producer Brian Grazer asked her if she wanted to dramatise the life of legendary soul singer Aretha Franklin for National Geographic.

Parks was at 2019’s Sundance Film Festival with her movie adaptation of Richard Wright novel Native Son when she received Grazer’s offer, to which she said yes immediately. “What I loved about the process from the very beginning was that while it tells a lot about the life of Aretha Franklin, it tells her story through the lens of genius,” Parks says. “We really worked on the story to show the viewer that while she was an awesome African American woman, she also was a brilliant, genius musician and human being.”

The third instalment in National Geographic’s scripted anthology series Genius, following seasons about Albert Einstein and Pablo Picasso, Genius: Aretha chronicles the life of the US singer, universally known as the Queen of Soul.

Starring Cynthia Erivo (Harriet) in the title role, the series explores the Grammy-winning singer’s impact and influence on music and culture around the world while also shining a light on her roles as a young gospel prodigy and an outspoken civil rights champion. Debuting in the US on March 21, it will also feature performances of some of Franklin’s best-known songs, thanks to a partnership between producers Imagine Television Studios and Fox 21 Television Studios with Warner Music Group.

“There are her triumphs and her flaws, her successes and her shortcomings; her brilliant moments when she breaks through and alchemises the troubles of her life into solid gold, and moments where we might also know her as the ‘Queen of Shade’ [when she says] something less than complimentary about someone,” Parks tells DQ.

“We see the mountains she climbs and her missteps but, ultimately, we see that every time she falls, she gets back up. She has tenacity and spirit. She’s very different from Einstein and Picasso – she’s the first woman in the Genius franchise, the first person of colour and the first American, so how might her genius be demonstrated? In her case, she took her light out into the world and lit up the lives of others, and that’s why her music transcends time and why we’re still celebrating her today.”

Parks’ own introduction to Franklin’s music can be traced back to childhood trips to west Texas to visit her aunties, who would teach Parks and her siblings to dance to the singer’s records. “I had Aretha Franklin’s music in my body. I can remember the way I was moving the first time I heard her music,” says Parks, who became the first African American woman to win the Pulitzer Prize for Drama in 2002 with her play Topdog/Underdog.

“It’s a visceral feeling for me. It’s very gutsy and ‘rootsy,’ so this series is very gutsy and rootsy, very character-driven and passionate. You see her struggle and triumph, and maybe she argues with the record producer or demands she has her way. It’s beautiful. In real life, she wanted everybody to think everything was always good and beautiful and perfect, but we know because she was human it wasn’t. We’re going to love her all the more when we know a little bit more about her story.”

In keeping with the title of the anthology, Parks plotted the drama by picking out points in Franklin’s life that demonstrated her genius, such as moments in the music studio or taking time out from her touring schedule to support Dr Martin Luther King and the Civil Rights movement, rather than presenting a chronological cradle-to-grave biopic. The singer died in 2018, aged 76.

“Finding the story, we were assisted greatly by the fact I was creating a narrative based on someone who had a wonderful life,” says the Kentucky native, who has collaborated on the series with producing director Anthony Hemingway. “It was very clear to me what the tentpole and building blocks were. Before I opened the writers room, I knew the theme and basic story of every episode. Then the writers would take it from there. Then comes production, where there’s cast, crew, extras, costumes, hair and make-up – you can’t believe it! There are just so many aspects of production that need attention constantly. We’re having fun, though.”

When it came to casting the show’s lead, Erivo was “the only Aretha I ever wanted,” Parks says of the London-born actor, who received an Oscar nomination last year for her role as abolitionist Harriet Tubman in historical biopic movie Harriet. “She brings daring, brilliance, compassion and passion to it. We’re American, which is a different kind of person [to someone British], and she’s embracing that and the beautiful messiness that is American. She’s just fantastic – and she can sing brilliantly. She’s got so many great ideas. She’s bringing so much to the whole project.”

Erivo previously demonstrated her vocal talent on screen in 2018 movie Bad Times at the El Royale, starring as a soul singer alongside Jeff Bridges and Jon Hamm.

While Genius: Aretha will contain plenty of moments with the singer on stage, it will also take viewers into the recording studio and will even feature Franklin playing the piano at home, composing songs and working with other musicians. For those scenes, Parks was inspired by her own love of playing and writing music. “So often when you see stories about singers, we see them singing a lot, which is interesting, but she was a musician. I want to see her in the studio, figuring out the songs. I’ve included a lot of that,” she notes.

Since its launch in 2017, Genius has sought to dramatise the stories behind the world’s most brilliant innovators, exploring their extraordinary achievements along with their volatile, passionate and complex personal relationships. It was an idea that first took shape at National Geographic shortly after the arrival in January 2016 of Carolyn Bernstein as executive VP of global scripted content and documentary films.

Bernstein was sent the script for a biopic about Albert Einstein, the German theoretical physicist who developed the theory of relativity. And although that initial script only had the foundations of what the subsequent series would become, “it was a really magical, exciting moment because we were looking to make our mark in scripted television and it was one of those serendipitous things where the project was quite perfect for us,” the exec recalls.

At that point, the project was only considered to be a one-off limited series. But midway through production, the idea of turning it into an anthology about other ‘genius’ figures from history gained momentum. Potential subjects, Bernstein says, should have a lasting influence that extends beyond their lifetime, be relentless innovators, have had a global impact and have faced obstacles in their professional and personal lives.

“Aretha is a bit of a departure because she’s our first woman subject,” she continues. “She’s the first mother, which I want to emphasise because it is relevant to the story – that she’s not just a musical genius. She’s also our first person of colour. So that already separates her in some important ways from Einstein and Picasso. They had significant challenges and obstacles, but it was not the same as being a young African American woman in the US trying to make her way. We were anxious for the third season to really find a subject who felt more contemporary and whose struggles resonated with the world today in significant ways.”

Bernstein adds that the aim of Genius is not to present the life of each subject through rose-tinted glasses or support a particularly uplifting version of events, but rather to tell the story behind the public persona with which many people would already be familiar.

“With Aretha, it’s ‘how did a gospel prodigy and an absolutely brilliant musical mind become the iconic Queen of Soul?’” she says. “That journey was very complicated, compelling and not always pretty. The goal is not to end on a high note – no pun intended – but to show you a rich, full, interesting and compelling life. With Aretha, we do end on a career high for her, but what you’ll have seen across eight hours is a lot of personal and professional challenges and obstacles that she’s had to overcome.”

Genius: Aretha is also notable for the fact it is described as the “first ever, definitive and only authorised scripted limited series” about Franklin’s life. It means that while none of her relatives or friends are directly involved in the show, the production team has sought to build a relationship with the singer’s estate.

Filming on the series in Atlanta was interrupted mid-March last year as a result of the Coronavirus pandemic, delaying its planned launch last May. Shooting resumed in October and was completed towards the end of November ahead of its launch this Sunday.

“We’re National Geographic. We are all about authentic, fact-based storytelling,” Bernstein asserts. “Anyone who might be worried about their loved one being the subject of Genius can look at the Einstein season and the Picasso season and feel confident that it’s not a tabloid treatment. It’s authentic. It’s fact-based. It’s certainly ‘warts and all,’ but we’re celebrating the idea of genius in the show. And when you leave the show, after watching eight juicy, satisfying, compelling hours, you will have a very deep understanding of who the Queen of Soul was.”

Showrunner Parks says that, thanks to working on the series, although she always knew Franklin’s music and her “sound,” now she knows her story too. “It will lift you up and break your heart at the same time,” she says. “It does for me, anyway. I get teary thinking of the stuff she had to go through and the way she won and the way she triumphs at the end. Hopefully, it will reignite the genius that is in all of us. It’s something that can be shared and should be shared.

“In the pilot, there’s a moment when we see some horn players with her on stage,” she adds. “I look at that and think Genius will never be the same. It’s soul music. It’s storytelling with soul.” 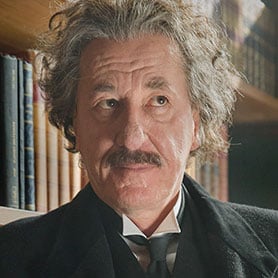 Albert Einstein
Albert Einstein was the subject of the first season of Genius, in what was National Geographic’s first ever scripted TV series.
Based on Walter Isaacson’s biography of the celebrated scientist, it charts how an imaginative, rebellious patent clerk, who couldn’t get a teaching job or a doctorate, unlocked the mysteries of the atom and the universe. Each episode sought to portray his extraordinary scientific achievements alongside his volatile, passionate and complex personal relationships.
Ron Howard (Apollo 13), who also exec produced the show, directed the first episode, with Geoffrey Rush (The King’s Speech, Pirates of the Caribbean) nominated for an Emmy for his performance as Einstein. 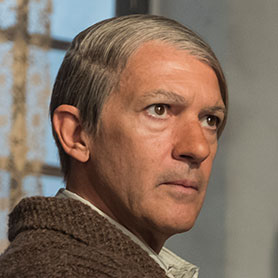 Pablo Picasso
The Mask of Zorro star Antonio Banderas headlined the second season of Genius in the title role of Spanish painter Pablo Picasso.
The series chronicled the life of one of the most influential and celebrated artists of the 20th century, who created an estimated 50,000 works of art. Living between Spain and France, his relentless creative drive was inextricably linked to his personal life, which included marriages, affairs and constantly shifting political and personal alliances.
Genius: Picasso was also nominated for numerous Emmys in 2018, winning for cinematography and sound mixing in the limited series/movie categories. Banderas was also nominated.