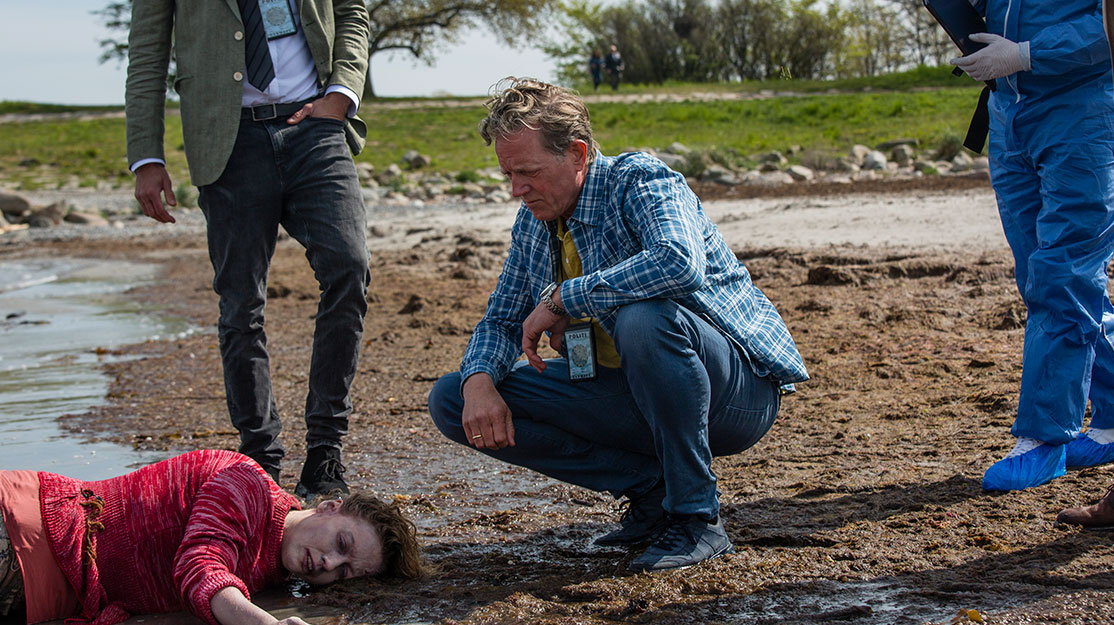 The Sommerdahl Murders star Peter Mygind and creator Lolita Bellstar tell DQ about making the Danish blue-sky crime show and the importance of creating a friendly environment on set.

For fans of Danish drama, Peter Mygind is immediately recognisable as Borgen’s Michael Laugesen, a ruthless politician and newspaper editor who continually clashes with Sidse Babett Knudsen’s prime minister Birgitte Nyborg. But while the political drama’s highly anticipated fourth season is not due to arrive until 2022 – Mygind has been confirmed among the returning cast – the actor will soon return to television to solve more crimes in the second season of Sommerdahl.

Known internationally as The Sommerdahl Murders, this blue-sky crime series sees Mygind play police investigator Dan Sommerdahl, who in season one is celebrating his 25th wedding anniversary with his wife and chief forensic scientist Marianne (Laura Drasbæk). But with her husband consumed by his work, Marianne asks for a divorce, leaving Dan at risk of implosion as he fights to win back the love of his life, unaware his best friend and partner, Flemming Torp (André Babikian), is also in love with Marianne.

Inside Helsingør police station, Dan, Flemming and Marianne must continue to work closely together to solve the city’s murder cases – four criminal cases are investigated over eight episodes – while their love triangle begins to complicate their partnership.

Set to begin its second eight-episode season on Denmark’s TV2 Charlie in March, The Sommerdahl Murders is produced by Sequoia Global Alliance in association with Germany’s ZDF. It’s distributed by Dynamic Television, with international buyers including streamer Acorn TV.

Filming on season two, which was ordered before season one aired, wrapped last autumn after a Covid-proof four-and-a-half month shoot on location in Helsingbør, an eastern coastal city that overlooks Sweden’s Helsingborg across a narrow stretch of the Øresund.

“It has been very challenging,” Mygind tells DQ. “I’ve been doing a lot of series but normally you’re filming two or three days a week. I’ve been filming five days a week, sometimes six days a week, for 75 days.

“Every scene, we shot in Helsingør, a city by the sea with a dramatic castle at the centre. It’s a beautiful city and nobody has filmed there before, so we’re the first series to take Helsingør under our skin. The people who live there have been having a tough time but now they suddenly have people all over Denmark coming to visit because of our series.”

Dan, Mygind says, is a policeman who really loves his job – perhaps too much, as his decision to miss an anniversary dinner for the sake of his job leaves Marianne alone and frustrated at the state of their marriage and family life.

“I’m sure a lot of people can recognise that,” the actor says. “If you use all your energy when you go to work and forget to put the same energy into your life, then someday somebody will leave, that’s for sure. That’s what Dan Sommerdahl is learning. He thought he was at home but he was never really there. He was still thinking about cases and doing his job while he was eating with his wife. He forgot to listen to her.

‘In season two, he will do everything he can to win Marianne back. He’s finding out now that it’s for real. Maybe it’s too late for him, but I’m crossing my fingers that it will not be. But it will be dramatic, I can tell you.”

The love triangle at the heart of Sommerdahl is what sets the crime series apart from its contemporaries, with Mygind admitting he “fell in love” with the character dynamics portrayed in the show.

“I loved going on a crime set and being angry at my wife, who at the same time works at the crime scene,” he explains. “We have to find the murderer so I have to work with her, but I don’t want to talk to her because I’m so angry with her. It’s been so nice to have that double edge, being a good policeman and being an asshole because he’s feeling pain in his heart. It has been very interesting to play that and go deeper into that.”

The emotional clash between Dan, Marianne and Flemming is all the more intriguing considering the latter does not feature in the Sommerdahl books by Anna Grue on which the series is based.

“I just felt that if we were to start telling this story, we would have to make some very big changes,” series creator and head writer Lolita Bellstar explains. “The books spoke about the main character’s wife who used to be the girlfriend of the main character’s best friend, so it was kind of there. I just opened it up and made it into the bigger story.

“Then I made maybe the biggest change: in the books, the main character is a copywriter at an agency. His wife is a doctor and his friend is a detective. I decided there was no way I could fit this into a series format, so I put the love triangle into one workplace, which is a police station.”

Bellstar (Lulu & Leon, The Legacy) has also taken some of the crime stories featured in the show from the novels, with another four cases stretched across the second season. But for fans of the books, the greatest similarity between the books and the series is their depiction of Danish society.

“I had to really study the causes of violence in our society, which we know quite a lot about nowadays,” Bellstar says. “There are structures in our society that really push ordinary people into feelings of powerlessness – that’s the cause and murder is the effect. In Sommerdahl, we don’t have gruesome murders. We always have ordinary people who have been pushed to the extreme in some way. Hopefully we get a little glimpse of how it’s possible that sometimes people, even people we might know, kill someone else, even though it’s very sad.”

The creator, who runs Sequoia with producer Janni Helleskov, was also keen for the series not to follow the dark, brooding Nordic noir style that has become familiar to international audiences over the past decade. Instead, The Sommerdahl Murders takes its stylistic cues from the lead character’s name – Sommer translates to summer in English – and seeks to reflect a more hopeful and joyful outlook on life than might otherwise be associated with crime drama.

Emphasising this point, Bellstar compares Sommerdahl to long-running British crime drama Midsomer Murders (known as Inspector Barnaby across other parts of the world), while Mygind goes further, describing it as a mix of Midsomer and Miami Vice.

“When we started this series, we wanted to be the Danish Midsomer Murders,” Bellstar says. “In season two, we keep the town, we keep the summer – it’s always summer in this series – and we keep the triangle. The director and the cinematographer had new ideas for where they’re putting the camera and stuff like that, but hopefully it resembles season one pretty much. What we also do in season two is open up a little bit to some of the other characters in the police station, so we get to know a little bit about the other characters who work there.”

As for how the love triangle might play out in season two, “I can only say we have a very large surprise,” says Bellstar, who has already started work on a third season. “My oldest daughter is 28 and my youngest is 15. Really soon, I will have my second youth, and that’s what I talk about in Sommerdahl. Suddenly, maybe you look different in the mirror but you really don’t feel that different inside – and it’s not a cliché, it’s the truth.

“In the first season, Dan and Marianne’s only child has moved out recently. And the moment the last child moves out of your family, you are not a mum and dad anymore. You’re the man and wife or the boyfriend and girlfriend, and how does that really function? That’s really what season one is about. Season two is about the crimes but it’s also about whether it’s possible to go back and become the person you were before you made mistakes and did things you are not so proud of.”

On set, Mygind works with a police advisor to ensure his performance as an investigator is as authentic as possible, though the actor is particularly passionate about supporting other members of the cast and crew – including the many day actors who join as part of the individual crime stories – to foster a supportive and friendly environment.

“For me, my behaviour on set is very important, especially when I’m a leading character,” he says. “We have 60 or 70 people on set and every day we have new friends coming in to play little parts, so it’s very important to say hello to them and make them feel comfortable. I know that if they feel safe and comfortable, the acting will be much better than in they come into an unpleasant environment.

“I’ve worked in unpleasant environments through my 38 years of working. I’ve had colleagues who don’t say hello in the morning and don’t say goodbye and don’t talk to you because they’re in their method. But I believe you can still be a nice guy and play an asshole character.”

The challenge on the show, he notes, is to keep that positive spirit throughout filming. “It’s very important people are not afraid when they go to work, because some people use their power to make fear, and that’s terrible because nobody gets better from that,” he says.

“Actually, when I was filming in London with Emma Thompson and Emilia Clarke on Last Christmas two years ago, it was so fantastic to see how Emma said hello to everybody and spread her good karma. That’s exactly the same way I’m doing it here in Denmark. I really believe that the more authority and power you have, the more likeable you should try to be.”

Mygind has been at the forefront of a Danish drama wave that has built up an international following, with roles in series such as Badehotellet (Seaside Hotel), Den som dræber – Fanget af mørket (Darkness: Those Who Kill), Bedrag (Follow the Money), Forbrydelsen (The Killing) and Borgen, as well as Nikolaj og Julie and Lars von Trier’s supernatural medical series Riget (The Kingdom). The actor puts Denmark’s success down to the time that has been spent nurturing talent both on and off screen.

“When I was at theatre school in the 80s, we were all looking to Sweden and seeing Ingmar Bergman,” he says. “But then came [Danish directors] Lars von Trier and Thomas Vinterberg, and our national broadcaster DR started using a lot of money, and you can see that when you watch a series. People have been thinking about not only the story, not only the acting, but also the scenography. I really love it and I’m so privileged that I have been allowed to work with very good and talented people.”