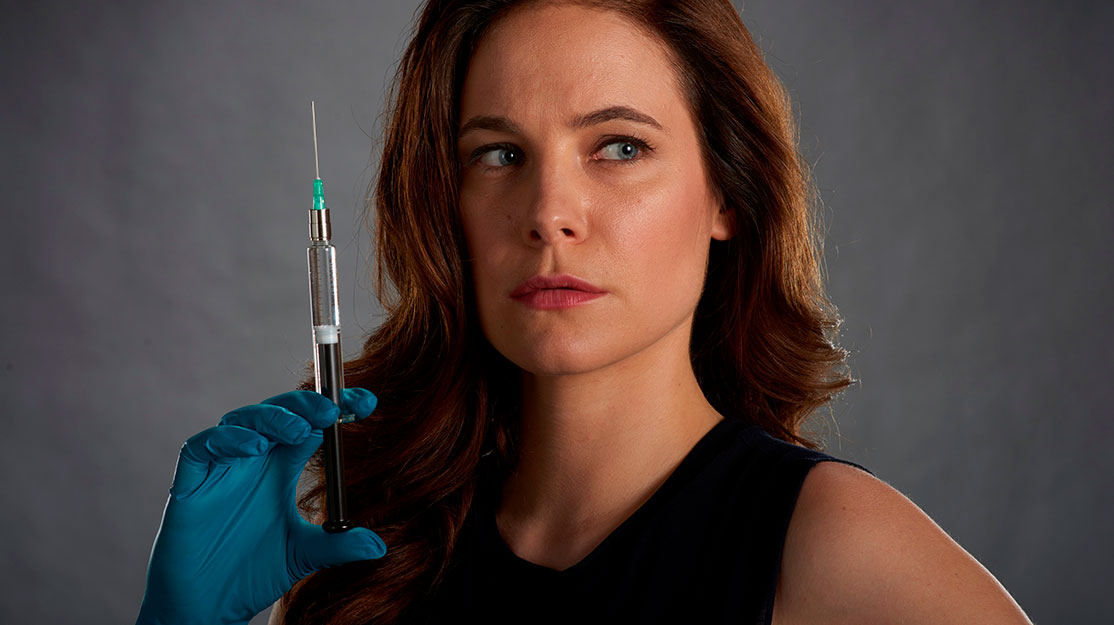 Mary Kills People showrunner Tassie Cameron tells Michael Pickard how the Canadian drama strikes a balance between the serious subject at the heart of the story and its lighter, humorous moments.

As befits a drama set in the morally grey world of assisted suicide, the opening minutes of Mary Kills People are a sombre affair.

Mary, played by Hannibal actor Caroline Dhavernas, is administering a fatal dose of drugs to an American football superstar as she helps him to carry out his wish to die, all behind the back of his unsuspecting wife.

Then suddenly, as the doctor and her assistant make their escape, the seemingly dead patient comes back to life, kickstarting a shift in tone as Mary comedically attempts to finish the job before his soon-to-be widow, now returned home, discovers what has happened.

Viewers may not know whether they can, or should, laugh as this opening phase comes to a head, with Mary and Des (Richard Short), her trusted partner-in-crime, ordering Mexican food at a drive-thru just minutes after killing their latest patient.

“I thought the script was so surprising tonally; there were so many turns that weren’t action or investigative turns but were character turns that whipped me around all over the place and surprised me in a way I don’t normally get,” admits showrunner Tassie Cameron. “It will be very interesting to see how people take it.

“My sister [exec producer Amy Cameron] was saying that people at a screening were quite shocked at the opening. They weren’t sure whether they were allowed to laugh or what they were supposed to be doing. Then when they’re ordering fast food and talking passionately but with a sense of humour about what they’re doing, I hope that gets you through that. You have the opening, you’re surprised and then you pick up on what the tone is meant to be.”

The eponymous Mary is Dr Mary Harris, a single mother and ER doctor by day, who also moonlights as an underground angel of death, helping terminally ill people to die on their own terms. But as her secret business booms, her double life becomes increasingly complicated when the police start to close in.

The tone of the series was a huge talking point during the show’s development, but Cameron says there was never an argument about shifting it away from creator Tara Armstrong’s original script.

“What drew us all to the material was the shifting tone, the moments of lightness and levity between these characters,” the showrunner says. “None of us ever set out wanting to make an issue piece [about assisted suicide]. We want to explore the issue, of course, and do it in an organic, thoughtful and respectful way but we were trying to make something that was surprising, entertaining, character-driven and not completely issue-based.

“Certainly Mary has her opinion – she tells us all the way through and she’s our hero – but her reasons for believing in it so passionately are quite complicated. We do explore the other side of the issue and the police are involved, so I hope it’s balanced. We’re not trying to dig in and convert people into thinking assisted suicide is the way to go. We’re just trying to show one person who’s passionate about what she believes and why.”

Setting up Mary as an ER doctor further muddies the moral waters, as she saves lives by day before facilitating the wishes of those who want to die when she’s off-duty.

Mary was always a doctor, Cameron says, before revealing she was put into the emergency room to enhance that very juxtaposition. “It felt realistic,” she says. “Many of the doctors we’ve spoken to who believe in assisted suicide also believe in doing everything they can to save their patients if they want to be saved.

“All the way through we tried to be as accurate as possible. We had a police consultant, spoke with many doctors, spoke with people who specialise with medical ethics and we read a lot. And, of course, the more you talk to people about it, it’s interesting how many people ended up having a direct experience with this topic as we talked about it.”

The six-part series, which debuted on Canada’s Global TV on January 25, carries elements of a mystery thriller, as the police chase down Mary, but also as viewers uncover who Mary is, her story and why she has this duel life. It was a conscious decision by the creative team to slowly reveal her true character over the course of the short run, revealing her to be strong, passionate and a force of nature while at the same time highlighting her flaws as she struggles with life as a single parent.

Cameron attributes much of Mary’s characterisation to actor Dhavernas. “She brought so much to the part,” she says. “She was magnificent. She’s a very self-contained actor and a very subtle actor. As soon as we realised she was available — we’d all seen her on Hannibal and I’d been following her career for years since [Fox’s 2004 comedy-drama] Wonderfalls, which I thought she was terrific in — we put it to her and she was phenomenal to work with.”

And unlike Rookie Blue, which she co-created, she says she has no problems running a show she didn’t originate, such as Flashpoint and now Mary Kills People.

“I love working with other writers; I learn so much from the process,” she explains. “I have no ego about it having to be my own. I co-wrote the last episode of Mary with Tara and Marsha Green so the only credit I have is the third co-writer. But there’s so many components to showrunning that aren’t just about the writing. I felt that’s where Amy and I were able to be very helpful to Tara and guide her vision, support it and interpret it in all the other myriad of ways that need to be addressed when you’re shooting.”

Cameron describes herself as a very collaborative partner who values everyone’s ideas, whether they come from the writers’ room or the floor of the set. “I feel like for people to do their best work, they need to feel that they can throw out all the bad ideas, and maybe there will be a good idea in there and no one will make fun of them,” she says. “I’m just very hardworking and a perfectionist about the scripts. I believe that a show is made on scripts and casting and those are the most important things.”

She also enjoys working with actors, whether they want to adjust something in the script or talk through a scene with her before they commit to camera. “I love being surprised by actors as well,” she continues. “The script is a guideline. There’s certain words and speeches you want to protect for various reasons but I think it’s a very collaborative form.”

That collaboration on Mary Kills People extended to the all-female creative team, with the exception of producer Norman Denver.

Cameron and her label Cameron Pictures, established with her sister Amy, partnered on Mary Kills People with Entertainment One (eOne), which also distributes the series internationally. Tassie and Amy Cameron both exec produce with Tecca Crosby, eOne’s Tashi Bieler and director Holly Dale, while creator Armstrong is co-exec producer.

“I’d never worked with so many women in so many positions. You would sit around the table at a creative meeting and everyone would be a woman,” Cameron says. “It was a very interesting and exciting experience to work with so many smart women on a project like this. I hope the end result for people on set was a safe, collaborative, supportive environment without a lot of big egos. We were all just collaborating to make it the best we could make it.

“It wasn’t by design, it happened that way. It was very organic, it wasn’t a mission statement. It’s a great time to be a female writer and showrunner. The challenges still lie more in diverse writers and directors. That’s where the work needs to be done. It still needs to be done in terms of gender. I keep seeing studies where a tiny percentage of directors in television in the US are women. It’s very disheartening. So maybe Mary Kills People was an unusual thing.”

An unusual thing, perhaps, both in terms of its development and its storyline, which may not have been considered worthy of transmission had it not been for the drama boom that has given rise to antiheroes and morally challenged characters, both male and female.

“The first aim for the show is to entertain and surprise and to portray an incredibly complicated female character,” Cameron continues. “But certainly I think we were all struck by how moving and how real the death sequences feel throughout the series. There’s a sequence at the end of the second episode I find so moving I can’t stand it. But its undercut with some humour. I think we’re just trying to be honest. Death, and life, are complicated, sad, funny. It’s a mix of tones and I think we’re trying to reflect that.”

One day, Cameron would like to find a genre show like Orphan Black to work on, but for now, she’s already back in production, this time on her next project, Ten Days in the Valley.

Ordered straight-to-series by ABC, the 10-part drama stars Kyra Sedgwick (The Closer) as Jane Sadler, an overworked television producer and single mother in the middle of a fractious separation. When her young daughter goes missing in the middle of the night, Jane’s world – and her controversial police series – implodes. Life imitates art: everything’s a mystery, everyone has a secret and no one can be trusted.

Cameron, who is the creator, writer and showrunner, also executive produces with Sedgwick, Jill Littman, David Ellison, Dana Goldberg and Marcy Ross. It is produced by Skydance Television.

“Mary Kills People debuts on Lifetime in the US in April and then Ten Days is premiering [on ABC] in May,” she reveals. “It was a really risky show – I never thought it would get made. It’s about a showrunner and I set out thinking I’m going to feel free to break any rules I’ve made for myself over the last few years of making television. I was just going to have fun and do something different. So I broke the rules of writing about the industry and I’ve got journalists, who everyone says are verboten on television – I just threw in anything I found interesting that people told me I shouldn’t write about. So imagine my surprise when ABC sent it straight to series.

“It’s really fun for me. We’re shooting at Paramount and we’re getting the real crew to sign off being the crew on camera for the show-within-a-show. It’s very meta and mind-boggling a little bit, but it’s fun.

“I don’t know whether more Mary will happen. That depends on how many people watch it, but I’ll get through Ten Days and then come straight home to work on season two of Mary Kills People.”