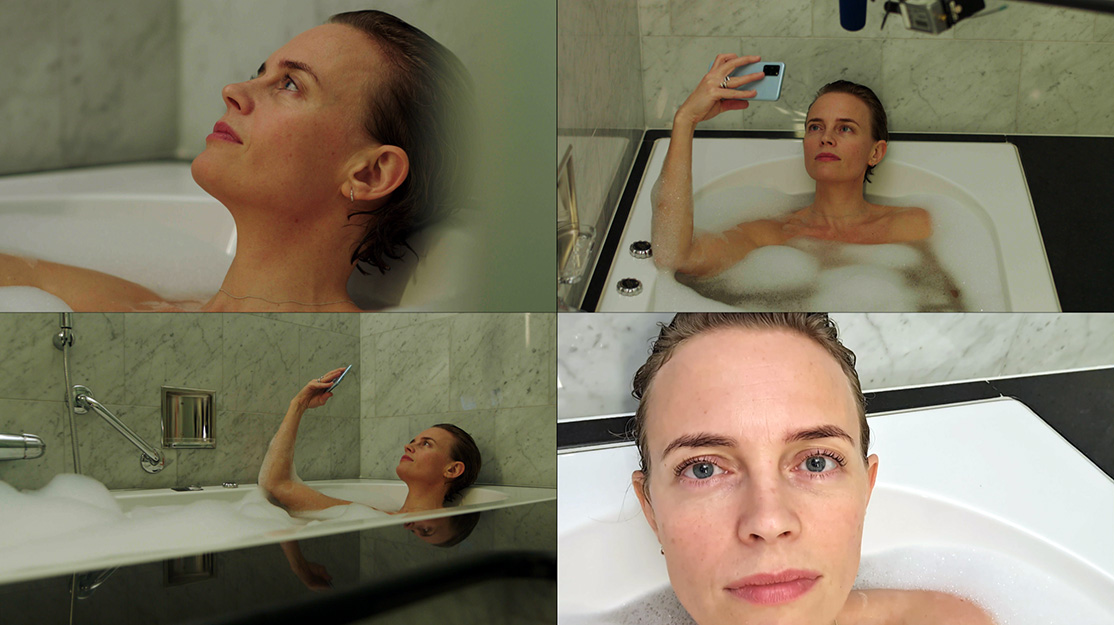 Even by the standards of other television dramas filmed during the coronavirus lockdown, the speed behind the development and production of Swedish film Orca is particularly impressive. Created by actor Josephine Bornebusch, she wrote the script in three weeks, shot it in 11 days and is now in the editing room ahead of its launch on Nordic streamer Viaplay this fall.

The catalyst behind the quick-turnaround project came when production of the Love Me star’s latest television series, musical drama Harmonica, was suspended as the pandemic began to bite in March.

“That was a disaster,” she tells DQ. “We were in prep a week before shooting and everyone had to leave. It was really sad, but the same day I came up with this idea. I thought, if we can’t shoot anything with a normal sized crew and can’t have all the actors in the same room, can we think outside the box? So I did. We had just five people on set – me and my DOP, the second DOP, the first AD and a sound guy. Then we had one actor every single day, so they never met each other and were not in the same room [during filming].”

Reflecting the socially distanced and isolated world in which it was filmed, Orca tells the stories of 11 characters cut off from the outside world and communicating with each other by screens. The feature-length drama features a son who can’t hold his mother’s hand as she lies on her deathbed, a pregnant woman who finds love, a mother who has abandoned her family when they need her most and two friends who discover they have different feelings for each other.

Speaking from the editing room at a largely deserted Warner Bros International Television Production studios in Stockholm, Bornebusch admits the basis of Orca is not a unique idea, particularly in the wake of other lockdown dramas produced over the last few months.

“But when I started to think about it, I didn’t want to write a pandemic story,” she explains. “Everyone is so tired of talking about Covid. I wanted to tell a story about not being able to be close to the people you want to be close to. The title is based on orca whales, which are the most social animals in the world. Everyone is so depressed because it’s really hard to be on the other side of a screen. So I came up with 11 characters and their stories. Everyone is connected. It’s about grief and it’s a love story as well. It’s frustrating not to be able to be there next to each other or touch each other or hug each other, but the series is actually really intimate as well.”

Viewers will see the story play out through a mixture of viewpoints, taken from traditional cameras, phone and tablet screens. The set was rigged with four fixed cameras, while the VFX team also built an app to record the hand-held action in high definition. GoPros cameras were also used.

“It’s like being in the Big Brother house because my DOP sets up all the cameras and then she walked out of the room, the actor comes in and he’s by himself and he has cameras everywhere,” says Bornebusch. “It doesn’t really matter where he’s walking or what he’s doing because the cameras pick up everything. In the editing room, we’re cutting between the phone, the computers and also the other shots.

“It’s been another way of working because, as an actress, you’re so used to going through a scene a hundred times, moving the cameras and then doing it again. But here if you nail it, you have all the angles. Then you can move on to the next scene.”

Considering the series will air later this year, how did Bornebusch consider the story in the context of where the world might be in a few months time, as lockdowns begin to ease amid fears of a second wave of the pandemic? “That was the reason why I wanted to do it so quickly,” she says.

“Everyone knows what we’ve been through. It’s really relatable for everyone in the world. It’s horrible what has happened and for all these people who have been sick or have had loved ones pass away, but it’s also really worrying that it could kill creativity. I felt we can’t just sit and be depressed. We need to work and we need to think outside the box and deal with it. This was probably my way of dealing with everything right now.”

Directing the series under Swedish coronavirus guidelines meant social distancing was in place at all times, and hand washing was also important. Bornebusch communicated with her downsized crew and the cast via walkie talkies, “or screaming in some cases,” she jokes. “But I think 80% of directing is in the casting process. If you cast the right people, then you should just let them loose. I went for the people I was thinking of when I wrote the script, I called them up and I said, ‘I just wrote a part for you. Are you interested in reading?’ They all did and they all signed up for it, which is unbelievable.”

One consequence of the pandemic for television productions will be the smaller crews working on set at any given time. Bornebusch says she has often wondered why crews were so large, but came to realise why everyone is so important when working on Orca.

“Sometimes in a normal production, I’ve said it myself, ‘Why are there so many? What are they doing here? Do we need all of them?’ But then you realise that yes, you do and you need more,” she says. “That’s been challenging. And for the actors, it’s been really frustrating to play against a cross [denoting where the other actor will be on the phone or computer screen] or a green screen. It’s really hard. But that’s why you need good actors, because they can pretend that someone is on the other side. I also learned good things.

“We shot between 20 and 40 pages a day and normally you shoot four. You can actually shoot more if you’re really dedicated and if you know what you’re doing. Sometimes maybe you should add another camera so you don’t have to stop everything and move them again. If this movie is as beautiful as I think it will be, it proves that some parts of the [lockdown] process are actually good for us and we can take them with us into a normal production. But I would never, ever do it again and never, ever shoot like this if it wasn’t for coronavirus. It’s been really, really hard.”

Harmonica is set to return to production this winter, telling the story of a country music duo – “like Roxette” – who are enticed to return to the stage for a reunion tour in a bid to resurrect their career and save their marriage. Bornebusch created and wrote the series with Jonas Karlsson (The Perfect Patient). They also both direct and star as Monica and Harry respectively.

“It’s a relationship drama but it also has a lot of music,” she says. “We shot all the flashbacks and the music videos before we had to stop, so we have that. But we’re working on it and hopefully we will get started in November.”

But whatever project she is working on, whether it is Harmonica, Love Me or the numerous stories dealing with social isolation in Orca, “it’s all about the characters and the dynamics between them,” Bornebusch concludes. “I want people to feel something. I want them to cry, to laugh, to feel embarrassed and recognise themselves or their friends. I want them to feel like they are in the room with all these characters. That’s my goal.”