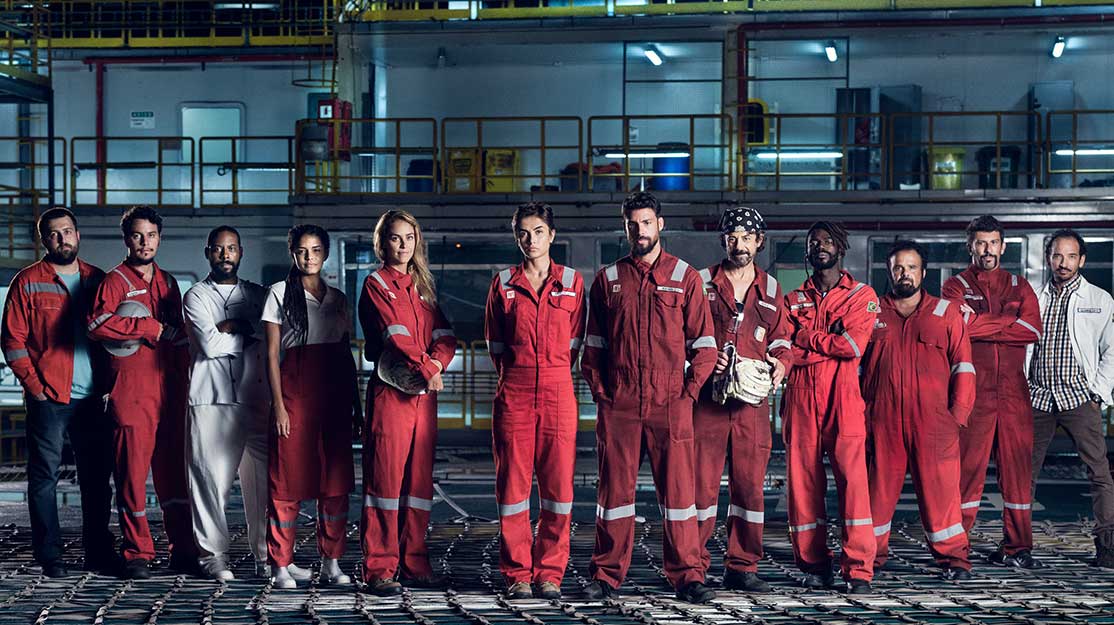 An oil rig is the unusual setting for Brazilian drama Isla de Hierro (Iron Island), which explores the complicated lives of the people who work on the platform as they split their time between their workforce family and those they leave behind on the mainland.

The increasing tension aboard the rig leads to clashes of egos as the workers live double lives, united only by their confinement together on the high seas. In particular, the 12-part series distributed by broadcaster Globo follows Dante (Cauã Reymond), the platform’s production coordinator, who finds himself facing devastating personal dilemmas while he is working away from home. Life is further complicated when his bid for promotion is upset by new arrival Julia (Maria Casadevall).

With season two already in production, writer Adriana Lunardi and director Alfonso Poyart tell DQ about the real-life events that inspired the series, the challenges they faced during filming and how the show was completed following the death of Lunardi’s husband and writing partner Max Mallmann.

What are the origins of Iron Island?
Lunardi: Huge oil deposits were discovered off the Brazilian coast in 2007 and we were really impressed by those who set out to work on the high seas extracting oil. We couldn’t help but wonder what the daily routine of these men and women was like, confined for two weeks, 200 miles from home, on a metal island that could blow up at any moment.
In 2008, Max outlined a story that had a comedy feel to it, kind of a western, in which a group of adventurers explore new frontiers of wealth on the high seas. Years later, when Globo decided to go ahead and develop the series, things had changed in Brazil. Scandals linked to the oil industry affected the country’s economic and political structure. So Max and I developed a story that would embrace this new reality, mixing drama, adventure and action.

How would you describe your writing partnership?
Lunardi: Our writing careers developed inseparably from our marriage. We were each other’s first readers and we were intimately familiar with each other’s creative path. We wrote Iron Island in all-nighters, in walks around Lagoa, where we lived, in cafés in Paris and in hospital rooms. The series is interwoven with our life story. Working with Max was very easy. He knew exactly what he wanted from Iron Island and we knew how we wanted it to end from the start.

Why is an oil rig a good setting for a drama?
Lunardi: Working in confined spaces intensifies conflicts between bosses and subordinates and also among colleagues, who are forced to work closely together, sharing meals and even cabins for two weeks straight. But what appealed to us most was the possibility of creating stories that would not fit into everyday environments. The platform encompasses both the adventurous spirit of classic travel narratives, with eerie situations happening on board, and the dystopian situations that might take place in a starship.
So the enemy may be a force of nature, such as the wind or the sea, but also a faulty sensor or a malfunctioning gas valve, all of which are life-threatening. The platform also becomes a component of identity. The main characters have their personality shaped by their work environment; just like the platform, these characters are explosive.

What writing techniques do you use to build the tension?
Lunardi: First of all, dialogue is short and the characters never completely reveal what they’re thinking or feeling, or what they intend to do. Most of the lines have an aggressive undertone – sometimes raw, sometimes subtle, often converted into sarcasm and dry humour and at other times repressed into grudges or melancholy.
Establishing shots are all the pause for reflection you get. Even ‘breathing’ scenes following a heavy or packed sequence initiate or prepare another action moment. In constructing the characters, we erased certain gender differences. The women are just as active as the men. Julia, our main character, is physically powerful. If necessary, she could kick pretty much any man’s ass.

How did you work with director Afonso Poyart on the series?
Lunardi: When Poyart was hired to direct Iron Island, the scripts had already been written. He requested minor changes, mostly linked to production, such as replacing a pelican with an owl. When shooting began, I wrote him a letter wishing him good luck, and we met when I visited the set. We talked briefly about the finished episodes in the editing room. He definitely packed the series with all the action it needed, which was a concern that Max and I shared as we wrote. Beyond that, Poyart created a sophisticated visual expression of the scripts we’d written.

What was the biggest challenge you faced to tell this story?
Lunardi: The biggest challenge was to tell the whole story. I loved writing Iron Island with Max and there came a time when I had to maintain my creative integrity and make sure that the ending would be the one we had imagined. Max died after finishing episode eight. As soon as I was capable, I sat at a table and jotted down the ideas we had for the final episodes, to the best of my ability. I was terrified that my memory might betray me or, even worse, that I would betray Max’s memory.
Afonso Poyart: The biggest challenges were the setting itself and the scale of the action. It was virtually impossible to stop an offshore rig to shoot the series, and even renting a portion of an off-duty rig proved very difficult. We managed to do so, but only with a few crew and cast members for just a handful of days.
We also have many action pieces throughout the show including fights, water action, high-altitude action and helicopter stunts. I had an elaborate pre-production process for the special effects and visual effects teams. It demanded lots of planning and testing to get to the final result. I wanted to make it very raw and real, so we had to make the cast rehearse and train hard. It was a big challenge for the actors and stunt professionals.

Where was the series filmed and how were the shots at sea recorded?
Poyart: We shot the majority of the scenes on sets that we constructed at Estúdios Globo. It was a huge set that included a helipad and many common spaces that simulate an offshore rig realistically. We also shot in many different locations, including a docked oil rig that was under repair. An old shipyard was used as a set in which our criminal had their headquarters.
We shot all we could of the real sea but we also used CGI water. The VFX team at Globo researched ways to create a realistic ocean, and you cannot tell what is CGI and what is real. It worked very well in all lighting scenarios and all sea states, from calm to stormy.

How did you approach the series as a director?
Poyart: Although I had two other great directors that did an amazing job, I ended up directing close to 90% of the scenes in the show. This was my first episodic project. Ultimately, all I want is a great scene, and sometimes we need to put some energy into the rehearsal process and in the blocking to achieve that.
Our DOP Carlos Zalazic and our A camera operator Anderson Accioly did amazing cinematography and camera work respectively. After getting the blocking right, I like to spend time finding ways to shoot the scene in a unique and creative way and, they did a great job helping us achieve that.