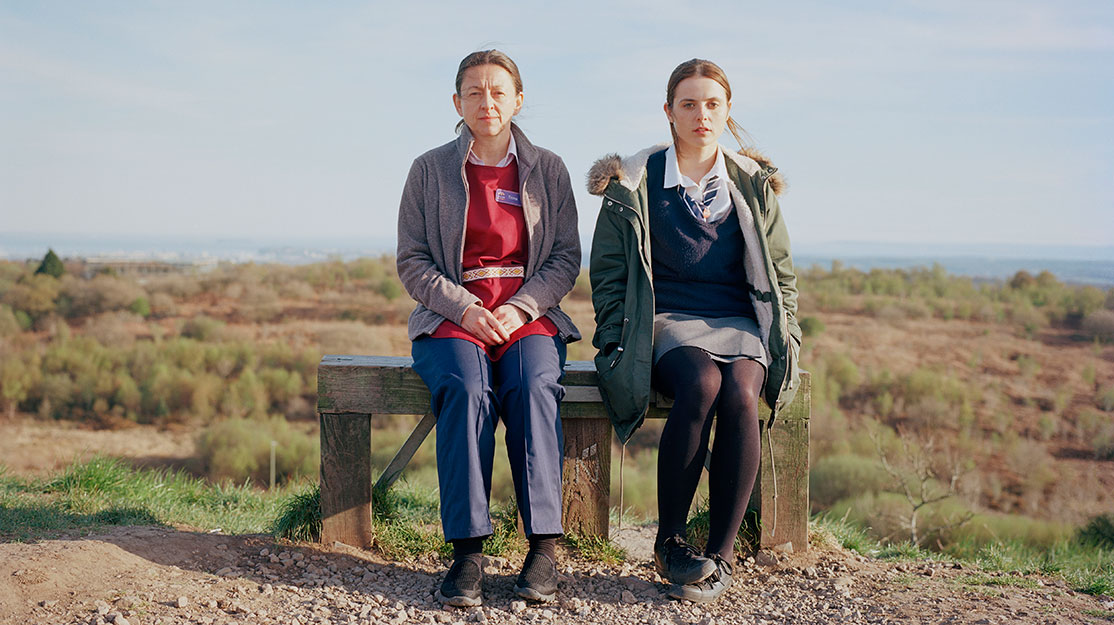 In My Skin stars Gabrielle Creevy and Jo Hartley, writer Kayleigh Llewellyn and director Molly Manners discuss the return of the award-winning series, the complex relationships at the heart of the story and why the show will conclude with its second season.

By any standards, the success of Welsh drama In My Skin is remarkable. Its pilot was named best drama and star Gabrielle Creevy won best actress at the Welsh Bafta awards in 2019, before creator and writer Kayleigh Llewellyn and director Lucy Forbes both won prizes at the same ceremony in 2020. It also scooped the Royal Television Society award for best drama earlier this year.

Now the series is back for its second – and final – season, which continues to follow the story of Bethan (Creevy), a Welsh teenager leading a double life as she negotiates a mentally ill mother and an abusive father, friendships and sexuality.

With Bethan in her last year of school and preparing to fly the nest, her mother Trina (Hartley) has been released from hospital and is working at the local bingo hall, but her father Dilwyn (Rhodri Meilir) is still causing problems. Will Bethan sacrifice her own happiness for the sake of her mother?

Llewellyn is the writer of the new five-part season, with Molly Manners (Urban Myths: Andy & The Donald) directing her first series. Produced by Expectation and distributed by BBC Studios, season two debuts on BBC Three and BBC iPlayer on November 7 before airing on BBC One.

Here, Creevy, Hartley, Llewellyn and Manners discuss the return of the series, the importance of its Welsh setting and the evolving relationship between Bethan and Trina.

The success of season one was a “huge relief” for Llewellyn, who wrote the show based on her own experiences.
Llewellyn: You have to pour your heart and soul into every project, but if it’s also your real life, there’s a bit of extra weight and expectation on it, so I was very nervous. Luckily, it went down well. It was so affirming to have that reaction from audiences; it just felt like a big hug.

But returning for season two, the writer had to overcome her ‘tricky second album’ fears.
Llewellyn: I just could not sit down to write it. I was like, ‘It’s going to be a flop. They’re going to realise I was faking it and I can’t really write.’ So I put it off for ages and then I sat down and wrote the whole thing in five-and-a-half weeks. It came very naturally and it was utterly joyous because I was now writing it with all of the cast being my really good friends. I was hearing their voices in my head and then just alternating between joy and weeping constantly.
It’s a form of therapy, really, to expose so much of yourself in this way. Oftentimes, these are memories you pop away in a box and you don’t go back there, so writing a show of this nature forces you to take down all the dusty boxes, blow them off and be like, ‘Right, come on, I’ve got to reckon with all of this now.’ It was ultimately super cathartic and I’ve saved myself thousands of pounds in therapy. It was emotional.

After writing on Killing Eve S4 and upcoming BBC drama Chloe, Llewellyn was “match fit” when she came to penning the new season.
Llewellyn: It’s about the number of hours under your belt. I just came into it like, ‘I know this craft.’ I did two drafts of every episode and there were big chunks that remained untouched. One in particular is a monologue that Trina has. From the moment I first wrote it, it was never touched again. I always think that, as a writer, you need to rework and hone for sure and take notes and have that collaborative process, but there’s something that feels quite pure and untouched about season two because it is pure and untouched, basically.

At the heart of a second season is a love story between Bethan and Cam (Rebekah Murrell), which proves to be a “shining light” in Bethan’s otherwise difficult life.
Llewellyn: I was very passionate about seeing lesbians storylines on TV anyway. As a lesbian, I’m so starved of that content. When a show like Vigil has a lesbian storyline in it, you see the way audiences – lesbian audiences – have embraced that. They’ve gone wild for it because we’re just desperate, hungry little people in the corner, saying, ‘Please throw us a bone, a kiss, a handhold, anything.’ So I really wanted to have that front and centre.
I also really wanted it to be, ultimately, a very healthy relationship, because if we do see lesbian storylines, it often ends in a death or there’s some kind of toxicity around it. My first love, who was incorporated in this very much, was just a wonderful woman and did so much to help me and make me feel better about myself. I really wanted to capture that and I’m really proud of that storyline. Gabby and Rebekah are just incredible together.

Coming back for season two, Creevy admits she was nervous about finding her character again after S1’s huge success.
Creevy: I love Bethan. Maybe I just got attached to her when we did the pilot and have grown with her. I read the scripts and was like, ‘Oh my God, these are so, so good.’ But then you get the good pressure from the first season and you’re like, ‘Am I going to be able to find her again?’ But it just comes back. Once you make that connection with someone, it never goes away and it just becomes more of a beautiful thing. It was good to be back in Bethan’s uniform.

In season two, Bethan has a growing acceptance of her relationship with her mum.
Creevy: Trina and Bethan, no matter what happens, they’ve always got each other. That’s what’s so beautiful about it. That doesn’t come around very often. There are ups and downs, but they’ve become stronger.

Similarly, Hartley was “terrified” about returning to the series, but found the new scripts carried the same emotional weight and humour as the first season.
Hartley: The emotion, the depth and the weight of the story is just so powerful, crammed into these five episodes. For me, it’s a love story. They [Bethan and Trina] love each other; they’re absolutely inseparable and there is this bond that ties them together. For Trina in this season, the exciting thing is you begin with her, she’s quite well and stable and she’s working and she’s happy. And then through a course of choices and events, the emotional journey takes a turn. It can be strained at times, Bethan and Trina’s relationship in this in this season. But there is that underlying level of love that’s unbreakable. It’s powerful in this season and it comes through so beautifully.
Gabby is a phenomenal actress, and I was terrified because I didn’t know how to find that stable level for Trina. But Molly, Kayleigh and Gabby really helped me find it. I just needed to trust and let go and let it come through me. I love the generational differences between Trina and Bethan as well, and I love that it’s not just the mental health issues and the sexuality and the difficulties with the relationship with the father. It was a nice experience and I got to spend time with people more this time.

In My Skin is the first series from director Manners, who was a “big fan” of season one. When she met Llewellyn and executive producer Nerys Evans (Miranda), they “all just instantly clicked.”
Manners: All I’d seen was when I signed up was a one-pager, but that in itself was so incredibly inspiring to see where the story was going. It’s seeing Trina in a completely different place and Gabby’s world opening up, and the dramatic stakes are higher. There’s more to lose and the themes are even broader than the themes of the domestic situation. It’s a coming-of-age story but with more drama. It’s an intimidating task to be a fan of something and know there’s such an amazing team involved and take that on. But I just felt so backed by everyone, from the actors to Nerys and Kayleigh. There was such a special energy on set – credit to everyone for bringing that.

Filming in Wales was “massively important” for Welsh writer Llewellyn, who wanted showcase the country’s urban and rural locations as well as the specificity of the dialogue spoken by the characters.
Llewellyn: When I write dialogue, I write it colloquially. I write it in the way the words sound and not necessarily using the correct English grammar, because it’s all about the lyricism of that accent. And it’s not just generic Welsh, it’s Cardiff. It’s the way people speak there – I’m writing for them. Then with the locations, we don’t just go, ‘They’re up a mountain, or ‘they’re somewhere beautiful.’ We go, ‘It’s Caerphilly Mountain. It’s the Wenallt car park.’ I want anyone from Wales to watch the show and be like, ‘I know where that is.’ And it’s beautiful. Wales is stunning, so why not shoot it there?

Creevy says In My Skin is a show she wished she could have watched when she was a teenager, and believes many viewers will resonate with the challenges and choices Bethan faces.
Creevy: Being a teenager is a time in your life when you like suffer the most. And if you feel like you’ve got no one to turn to, it can be a really sad place to be. But it’s OK to feel like this now – things get better. For people like Bethan, there’s a way out.

Hartley: Season two is a lot about hope. This show is honest and authentic, and it covers real life and real people. We’ve tried to portray our version of that so people get this deep connection. We’re all looking for that connection. We no longer want to feel alone. When you love somebody, it’s important to accept them for everything they are because you never really know what they’re going through. It’s also really funny. It’s really empowering. It’s just amazing. I really want people to see it, whether it makes them laugh, gives them hope to be who they really are or gives them the inspiration to forgive somebody who’s wronged them. In My Skin is a spiritual story about real people.

Despite the show’s success, Llewellyn is adamant season two will be the end of In My Skin.
Llewellyn: I had a very definite end point for the whole story in mind, the final frame of season two, so I knew that’s what we were building towards. In my head, I was like, ‘I have to tell this full story. If it’s two seasons, they’re less likely to take it away from me.’ There were also the practicalities of [keeping] our young cast, who are all phenomenally talented and they’re all on the rise. They get busier and busier. They’re also ageing. You get to a point where you’re like, ‘Is this Dawson’s Creek now?’ It was always just two seasons and done. Let’s just keep it short and sweet, tell this story and get out of there.