Six of the Best: Zhanna Shakhshaeva

The head of the international department at Russian distributor All Media makes a selection of scripted shows worthy of binge-watching, including an Icelandic thriller, a Spanish prison drama and an award-winning US series. 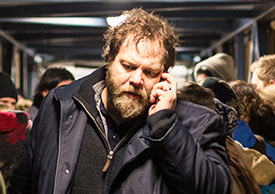 Trapped
This drama was produced in Iceland. It enthrals with its fascinating photography and creepy feeling as it unravels the dark mystery behind a crime committed in a small town isolated from the rest of the world by snow storm. The story centres on a policeman who finds himself having to deal with a major crime for the first time. With no hope of outside help, he has to rely on his scarce experience and his best attributes – his honesty and his fidelity to his job. This drama stands out for its dark yet utterly realistic style. The viewer’s feelings are intensified by its atmosphere of reality, generating fear, sympathy for the heroes and a desire to learn the truth. 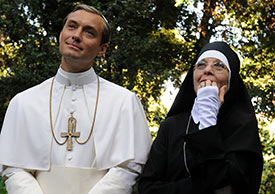 The Young Pope
Another drama with unquestionable style, The Young Pope reminds me of Italian cinema that savours each detail in every scene. This is the most intriguing series on the most complicated theme – religion. All the hidden problems and complexities of the Vatican are told in a surprisingly light manner through the main character who, despite occasionally declaring he doesn’t believe in God, suddenly becomes the new, youngest ever, Pope. Creator and director Paolo Sorrentino is a brave, ambitious filmmaker who dares to challenge stereotypes about the life of clergymen. In just one season, he brings up a bunch of hot-button topics: abortions, paedophilia, infertility and faith among churchmen. 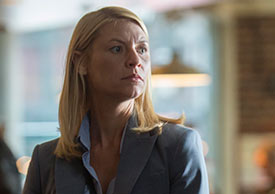 Homeland
This American adaptation of the story born in Israel as Hatufim keeps up to date with real-world events, giving viewers the sense that its characters live next door and the action is happening right now. This involves you in the story and in the breathtaking conflict of the protagonist, Carrie (Claire Danes). She is constantly in the middle of a global conspiracy that threatens peace in her country, and is ready to sacrifice her life for her homeland at any minute. Yet we see how fragile her own world is: an incurable illness that threatens her whole career, a personal tragedy, and the constant struggle of raising her daughter and keeping her safe. Despite the overall political context, the conflict is very human. Homeland lets us sneak into the world of governors and decision-makers, but makes it clear that ordinary people – just like us – and seemingly small, insignificant events can change history. 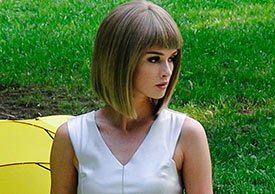 Better Than Us
Russian drama Better Than Us (also pictured top) depicts a near future where people co-exist with human-like androids who become whatever we want, from home assistants to office employees. That provokes conflict with young people who blame robots for occupying their jobs and complicating their lives. These ‘perfect’ androids can have anything – apart from feelings. But what if they learn to feel? What if they have superior feelings and a superior mind? The drama intrigues with these questions, presenting a fantasy about a different world. It is performed perfectly by the actors, especially Paulina Andreeva (pictured) as the main female android. Produced by Yellow Black and White and Sputnik Vostok Production, Better Than Us will premiere in Russia soon. 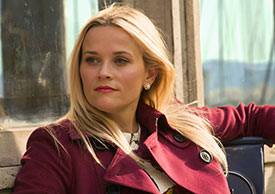 Big Little Lies
I like the inverted way this story keeps you hooked the whole time. From the very first scene, you are dying to see the conclusion, when the truth will be unveiled. Every storyline matters and no detail is unnecessary. And the whole structure is built on one little lie that keeps viewers curious right up to the finale. Brilliant casting and storytelling makes every character central. The characters are key to the drama: although they are somewhat upper class, all are very real, alive and down to earth in a good way – even the ‘bad’ or broken ones. 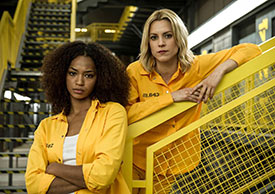 Locked Up (Vis-à-Vis)
This Spanish series has proved popular around the world. It centres on a strong female character, a major trend nowadays that still has room for new interpretations and plots. The protagonist, charmed by her boss, commits tax crimes for him and ends up in prison, where she must rely on her toughness – it helps her overcome emotional shock, build relationships with her cellmates and simply survive. This combination of a fragile woman and a tough fighter is highly compelling. It makes you follow the whole story, as does the plot itself, which is full of twists and danger. Locked Up has the key combination for success – a well-written script and a bright protagonist whose desires and aspirations are very clear to any person in nearly any part of the world.

tagged in: All Media, Zhanna Shakhshaeva