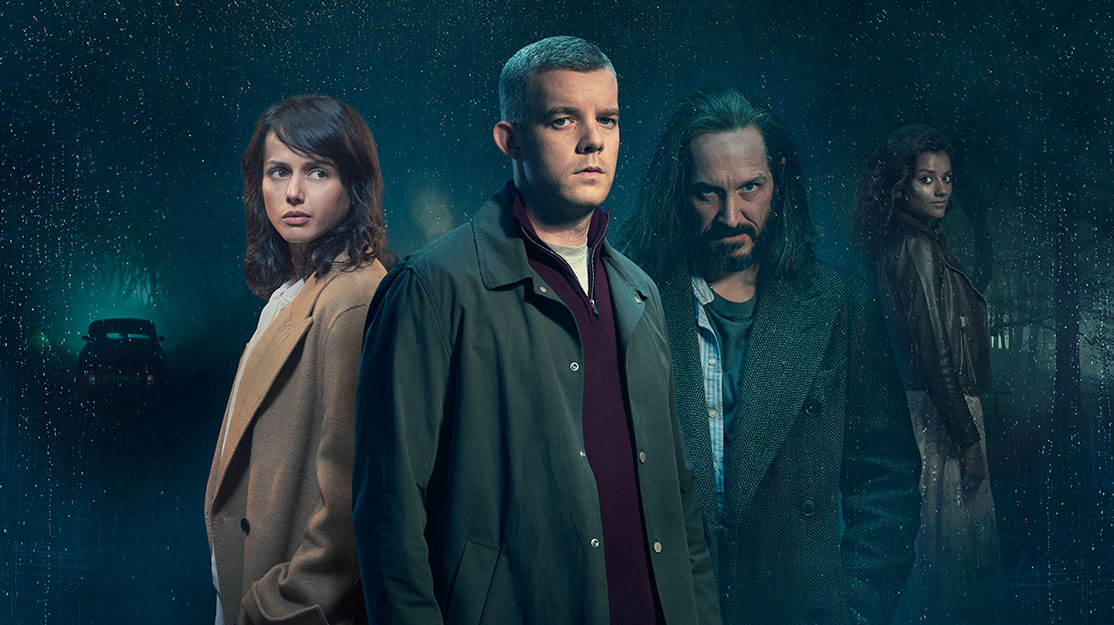 Dark secrets are unearthed in The Sister, from Luther creator Neil Cross, who joins stars including Russell Tovey to speak about making the series and adapting his own novel for television.

Russell Tovey was discussing his role as one of three siblings in family drama Flesh & Blood when he mentioned working on another project he described as the hardest job of his career.

“I just did a job before this, where I was the lead and I was in every single scene, every single day for nine weeks,” the actor told DQ in January this year. “Every scene is a panic attack, full of anxiety, crying, covering up, lying, and then you’d finish that scene and you’d think, ‘What’s the next scene?’ And you’re having a panic attack and crying. Then you’d get in the car at night and learn your lines for the next day.

“As an actor, you put yourself in these situations and you’re tricking your body into having these emotions. Normally I’m quite good on set. If someone worked with me on Flesh & Blood and also on this, they’d be like, ‘Is that Russell?’ I was really insular and quiet. Halfway through it, I was like, ‘This is the hardest job I’ve ever done.’ I can’t phone any of it in; I want to do it service but it was relentless.”

The series in question is The Sister, a four-part thriller created and written by Neil Cross (Luther, Hard Sun) and based on his own novel, Burial. Tovey stars as Nathan, who has spent 10 years trying to move past a night that led to the sudden death of a young woman. A decade later, his life threatens to fall apart when Bob, an eccentric former acquaintance and the only other person who knows what happened that night, reappears with terrifying news.

Launching on ITV last night and airing across consecutive evenings this week, the show opens in 2013, when Nathan watches a police appeal for a missing woman who disappeared three years earlier. Cut to the present day and Nathan receives an unexpected visit from Bob (Bertie Carvel), whose unwelcome appearance coincides with the return home of his wife Holly (Amrita Acharia), who also happens to be the sister of the missing Elise (Simone Ashley).

Speaking ahead of the show’s launch, Tovey stands by his earlier claim that playing Nathan has been his most difficult role yet. “The thing about this role was that you exist in this contained tension where whatever you are saying is not what is being said and there is anxiety and absolute fear and panic the whole time but it’s being suppressed,” he explains.

“I really wanted to serve Nathan and do something people had never seen me do. It’s all about Nathan just trying to disappear. He wants to be invisible. But living in that energy was a lot. I definitely took it home with me. I felt like you had to commit to this role, I had to do that to access this character so I had to put myself in that position. When I finished this, I was absolutely exhausted. To serve Neil’s writing, to play this character, you have to put yourself [through it] emotionally and invest in these situations.

“The character [of Nathan] is horrific. Trying to balance it as an actor and having three different timelines, it’s a lot to think about, so it was exhausting. As an actor on set, I’m normally quite jovial and cheeky. On this, people will probably think I’m a right moody git.”

Carvel, known for roles in Doctor Foster and Jonathan Strange & Mr Norrell, says he is drawn to characters who offer him the opportunity to dig into unfamiliar experiences, “particularly if it comes with dressing up,” he adds, noting Bob’s long, straggled hair and run-down appearance.

“Working with the talented people who make that possible – Aideen Morgan, the costume designer, and make-up designer Sophie Slotover – I really enjoy that collaboration. You can create something three-dimensional,” Carvel continues. “Your job as an actor is to take all of those clever people’s work and push it through a single funnel. I also really enjoy working on translations from novels because there’s so much to dig around in.

“This was the best of both worlds because it’s Neil’s translation of his own work. Just to read scripts that are finished before you start is really gratifying and allows us to do the kind of detective work you want to do as an actor. I felt as though we were making a Fabergé egg, something really detailed. It was a real joy.”

As Holly, Acharia is involved in numerous emotionally demanding scenes as the character continues to grieve for her missing sister. “We were privileged to work with such a great team that those emotional scenes become natural, because everyone was invested in telling the story,” she says.

“I wouldn’t say I have a particular method of getting there, you just do it. If you’re in it and the writing’s good and you have the space with your fellow actors to create that journey and that world, it’s just a very natural part of being in that scene.

“I loved the book, but what we’ve created is very different from the book itself. I’m glad it’s got a different name. What was great about it is you knew the trajectory, you knew where it was headed and you knew the vibe and suspense the piece was after. I found it exciting to read the book and then jump into a different version of it.”

“I was absolutely blown away by the script itself,” she says. “Jacki seemed to me like a bit of a lone wolf. It’s why her relationship with Holly developed so quickly. She’s so driven by her work and career that she doesn’t give time to outside personal lives. That’s why they develop this long relationship and deeper connection. You’re following this journey through Jacki’s eyes, so I was really excited and compelled to jump on the script and be a part of it.”

Cross’s novel Burial, first published in 2009, was inspired by a dream he once had of randomly stabbing to death a homeless man, and Harwood says the story has stuck with her since she first read it. After working on Hard Sun, she and Cross revisited earlier conversations they had had about bringing it to television.

“When the moment came, we said, ‘Well, maybe we should do it.’ The thing that stopped us over the years was Neil had done films of it in different versions and there was no point doing it if Neil didn’t want to revisit it,” Harwood says. “It just came to the point when suddenly he actually felt he rather did. And in conversations with ITV, it felt like the right time and the right place. It came together very quickly once we made that decision.”

However, Cross doesn’t want The Sister to be thought of as an adaptation. “I have a one-man campaign to ban the word,” he says. “You to have accept, be it your own novel or someone else’s, it’s actually a transformation. The two mediums are so completely different. The biggest technical challenge in adapting the novel called Burial was finding a better title, but primarily it was how to introduce Nathan. Nathan is so central to the story. He drives it in every way, so I had to think of a way to structure the story so the audience was allowed to get to know and like Nathan before they found out certain aspects of his past behaviour.

“The novel’s a meat-and-potatoes psychological thriller. It starts at point A and works all the way to the climax. Most things I write for the screen are the same. But the question of Nathan and how to make us love Nathan before we learn this stuff [took us to] some slightly Russian doll timelines. We’ve got three timelines in the show, and that was really the key to cracking it.”

Director Niall MacCormick (The Victim, The Durrells) also adds an extra layer of mystery and possible supernatural intrigue through the show’s distinct visual style. Cross says he and MacCormick had extensive discussions about ensuring each character inhabited a different world within the show. “So much of it is this collision between past and present,” he notes. “Bob also lives in a fetid psychological bubble. His surroundings reflect his psychology at the time. Bob is such that he infects his environment; it reflects who he is and who he becomes.”

Meanwhile, Cross and Harwood are quick to praise the core cast of Tovey, Carvel, Acharia and Toussaint-White. “What you’re really trying to capture here is a relationship between the actor, the part and the audience. Neil and I knew from day one that, if the audience didn’t love Nathan and then want to protect him, this was never going to work,” Harwood says.

“The great thing about Russell is he’s grown up with the audience. But also, he is someone who people trust and like and empathise with. So even though he’s done these deep, dark deeds, you want to carry him through it. And then, of course, we have to find the ying to his yang. I’d just worked with Bertie on Baghdad Central and it was about finding someone who has the force and power that he has but is also a bit shapeshifter, which is one of Bertie’s special skills. And then who is the sister? Is it Elise or Holly? None of this was going to work without a Holly one could invest in and love.

“This is the paradox – the person who could most destroy her is the man who loves her more than anything in the world. She’s healed him. He’s healed her. Then you’ve got to have the sneaky friend coming in to crack the whole thing open. It’s difficult for Nina as Jacki because she doesn’t come in until episode two, but she’s got to feel like a constant threat. She, too, is motivated by love and protection. She loves and wants to protect Holly. It’s a small gang, and when you get the tension between the four of them right – bingo! Boy, did we luck out.”

Cross agrees the dynamics between the main characters are key to the show, adding that he also allowed the actors’ performances to dictate the structure of the finished show.

“The very first scene of the first episode wasn’t written to be there. It came much later in the first episode. But the performance is such that I just wanted to see Holly and Nathan up top because it belonged there,” he explains. “Similarly, how we met Jacki in episode two was restructured. Nina’s performance is so awesome that when we meet her, we wanted it to land as a really big moment. That is something new to me, not just working with a cast I so admire and who brought the characters to life in such a vivid way, but to allow that, in a way, to dictate the shape of the show.”

The Sister is the latest dark psychological rollercoaster created by Cross that, coupled with its release on consecutive nights, is sure to hook viewers and take them along for the ride.